‘Zhizun Qianban’: A Recognition of an Obscure Lotus (Nelumbo) Cultivar with an Interesting Legend

Lotus, often confused with botanical Lotus Linn. in the legume family, is the common name of Nelumbo Adans. (Nelumbonaceae), which has only two species, Nelumbo nucifera Gaertn. native to Asia and N. lutea Willd. native to America and the Caribbean sea region. As a result of its diverse germplasm and a long history of lotus cultivation and breeding activities, China has bred the greatest number of lotus cultivars in the world (Tian and Tilt, 2010). In the past 30 years, many cultivars have been recognized or rediscovered, particularly in the suburbs and rural regions. Nelumbo nucifera ‘Zhizun Qianban’ is a newly named cultivar discovered in southern China in 2009 and registered by the International Waterlily and Water Garden Society in 2010. It is a large-sized lotus with a double pink flower composed of up to 1650 petals. It can be planted in ornamental ponds, containers, or grown potentially as a cut flower.

’ in Chinese characters), which means “ultimate thousand-petals,” was discovered and named by Dr. Daike Tian at the South China Botanical Garden (SCBG), Chinese Academy of Sciences (CAS) in 2009. In Chinese, “Zhizun” means the highest position, the most honorable, or a synonym of the King, and “Qianban” means thousand-petals. The name can be translated into “ultimate thousand-petals” in English. This lotus grows in a pond of SCBG and was introduced by an aquatic plant researcher, Dr. Lei Chen, in 2008 from a small nursery owned by Mr. Changxin Chen in the suburb of Guangzhou. According to Mr. Changxin Chen's recall (during an interview with Dr. Daike Tian), he bought a rhizome shoot at the price of 2 RMB ($0.30 U.S.) from an unnamed owner in Daliang of Shunde in ≈1981. It is more interesting that the former owner informed Mr. Changxin Chen that this lotus luckily survived through a tragedy resulting from the Great Proletarian Cultural Revolution in China from 1966 to 1976. During this event, private gardens were not permitted and the Chinese people were not allowed to own plants. Therefore, the ornamental plants of the former owner were almost completely destroyed. Fortunately, one plant of this lotus survived because it was planted in a traditional hard-to-break stone ponder (a large mortar-like utensil used for grinding rice, corn, and other food). Mr. Changxin Chen does not know the exact name of this lotus but calls it “Qianceng Mudan” (thousand-layer tree peony), “Xuri Dongsheng” (morning sun rising in the east) and “Dahong Mudan” (big red tree peony). This cultivar has not been documented, and to date, the true history, creator, original owner, and name of this cultivar are unknown. Therefore, it was given a new name based on morphological traits. ‘Zhizun Qianban’ was probably derived and preserved as a natural mutation from the wild. It more closely resembles the cultivar Zhongshan Hongtai (Zhongshan duplicate red; Wang and Zhang, 2005). It is often difficult for novice gardeners to readily distinguish between both of these cultivars. However, close examination clearly shows that ‘Zhongshan Hongtai’ has fewer petals, some stamens, and a nearly normal receptacle, whereas a trained observer will easily note that ‘Zhizun Qianban’ has increased petals, no stamen, and extremely degenerated receptacle. There is a possibility that these two cultivars are closely related. Future basic molecular analysis is necessary to decode if ‘Zhizun Qianban’ is derived from ‘Zhongshan Hongtai’. ‘Qianban Lian’, another thousand-petaled lotus, can be traced at least back 1500 years based on Chinese literature, Shi Yi Ji (Wang, 317–394 A.D.) in the East Jing Dynasty; thus, it may be possible that ‘Zhizun Qianban’ has a much longer history than that currently known. Its complete story remains a challenge for further exploration of the literature and the use opportunities and resources available through molecular biology.

‘Zhizun Qianban’ was a new trial name first published in The Picture Album of SCBG 80th (Wu et al., 2009). Lotus growers, researchers, and enthusiasts have suggested that ‘Zhizun Qianban’ was the best and most honorable thousand-petal lotus ever found in the world.

The flower opens slowly, taking 3 to 4 d from the start of opening to full opening. A single flower may last for 1 week, much longer than the 4-d flowering duration for most cultivars. With a longer flowering time for a single flower, beautiful shape, and strong stalk, ‘Zhizun Qianban’ is an improved and excellent ornamental for decoration in either ponds or containers. Also, it has potential as a cut flower.

‘Zhizun Qianban’ is closest in similarity to ‘Zhongshan Hongtai’ (Fig. 10). However, both cultivars are easily distinguished by the three traits of petal number, stamen, and shape and morphology of the receptacle. Namely, the latter has stamens, receptacle and fewer petals. Also, ‘Zhizun Qianban’ is different from ‘Qianban Lian’ (another lotus cultivar with over 1000 petals) by smaller petioles and flower stalks, a long conical bud shape, more outer petals and tiny inner petals, and sometimes two to five “flowers” in one flower of the latter.

‘Zhizun Qianban’ is completely sterile as a result of the absence of stamens and a pistil. It can be propagated by rhizome–shoot division in spring or by running shoots during the growth season. Propagation of this cultivar by tissue culture has not been investigated but may be a possible alternative. It blooms from late May to August in southern China. The plant grown in a container can develop three to four flowers. Like other lotus, the young leaves of ‘Zhizun Qianban’ are susceptible to aphid damage, the larvae of the cotton leaf worm (Spodoptera litura Fab.), and yellow-tea thrips (Scirtothrips dorsalis Hood.), particularly in the southern region of China.

‘Zhizun Qianban’ is easily confused with ‘Zhongshan Hongtai’ (Fig. 10), therefore, and has probably been distributed across China by nursery producers under the name of ‘Zhongshan Hongtai’. It is an excellent plant material for study on development and evolution of double flowers of lotus. An undergoing research project on molecular mechanism of double flowers in Nelumbo is conducted in Dr. Daike Tian's laboratory at Shanghai Chenshan Plant Science Research Center, CAS, and Shanghai Chenshan Botanical Garden. Currently, a very limited number of the stock plants can be obtained by contacting Dr. Daike Tian (e-mail: tiandk09@gmail.com). 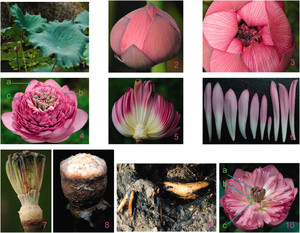