According to the FAO (2008), Iran is second, third, and sixth in global ranking of apricot, almond, peach and nectarine production, respectively. Almost 158,675 ha of plantations in Azerbaijan province (Iran) are allocated to various stone fruits such as almond, peach, nectarine, apricot, etc. (Ministry of Agriculture of Iran, 2007). Despite the economic importance of these orchards, there are very few drought-tolerant rootstocks suitable for grafting the new improved varieties. Therefore, more than 50% of the groves are threatened by drought conditions. Similarly, there are lots of places suffering drought conditions. Thereupon, producing desirable numbers of a new hybrid rootstock that have the promise of tolerating such condition is of great importance.

The HS314 rootstock is a hybrid between almond and peach (Prunus amygdalus × P. persica), which is well adapted to drought conditions (Dejampour et al., 2005). This rootstock that has been bred in Sahand Horticultural Research Station of Tabriz is an appropriate alternative for GF677 and has shown a better tolerance to saline conditions in comparison with GF677 (Dejampour et al., 2009). To produce the required number of HS314 plants, a suitable propagation method is necessary.

Micropropagation is a suitable and fast method for obtaining a large number of genetically identical plants (Antonopoulou et al., 2005). Micropropagation techniques for Prunus species like apricot (Koubouris and Vasilakakis, 2006; Marino et al., 1993; Perez-Tornero et al., 1999), cherries (Pedrotti et al., 1993; Sedlák and Paprštein, 2008; Tang et al., 2001), almond (Ainsley et al., 2001a, 2001b; Channuntapipat et al., 2003; Gurel and Gulsen, 1998; Isıkalan et al., 2008), and some Prunus interspecific hybrid rootstocks like PR 204/84 (Fotopoulos and Sotiropoulos, 2005), GF677 (Kamali et al., 2006), PeMa (Balla and Kirilla, 2006) have been described. The present study was conducted to develop an efficient protocol for in vitro propagation of the HS314 rootstock that may be suitable as a rootstock for stone fruits in drought-impacted environments.

Shoots of HS314 rootstock were obtained in June from the Sahand Horticultural Research Station, Tabriz, Iran. Nodal segments of 0.5 to 1 cm lengths, including axillary buds, were used as explants.

Establishment and proliferation of HS314 rootstock shoots in vitro.

Explants were surface-sterilized by immersing them in 70% (v/v) ethanol for 1 min followed by 50% (v/v) bleach [2.5% (v/v) sodium hypochlorite solution] plus 2 drops of Tween-80 for 10 min and rinsing four times with sterile-distilled water. Explants were placed on a modified DKW medium (Driver and Kuniyuki, 1984) supplemented with 3% (w/v) sucrose, 100 mg·L−1 of Phloroglucinol, 0.7% (w/v) plant agar (Duchefa Co., The Netherlands), and 0.5 mg·L−1 BAP. The pH was adjusted to the value of 5.7. All media were autoclaved at 121 °C for 15 min. The in vitro-established explants were transferred to the same culture media containing different kinds of plant growth regulators for further proliferation (Table 1). All cultures were maintained under a 16-h light condition (supplied by fluorescent lamps) with 48 μmol·m−2·s−1 intensity and subsequent 8-h dark condition in a growth chamber at 23 ± 1 °C. They were sub-cultured every 3 weeks.

For rooting, 2 to 3 cm long microshoots were cultured in DKW medium containing half-strength of macroelements plus IBA (Table 2) or NAA (similar concentrations to IBA) for 1 week in the dark. Shoots were transferred to a hormone-free DKW for root development in light conditions. To improve rooting, the effects of different concentrations of macro- and microelements of DKW medium plus two levels of IBA were studied (Table 3). For acclimatization, rooted plantlets were washed with tap water to remove any residual agar and were transplanted into disposable plastic pots containing peatmoss soil and perlite (1:3) and covered with small transparent plastic covers. After 2 weeks, a few small holes were drilled for aeration. The coverings were removed completely after 1 month. Every 2 weeks, the plantlets were fertilized with 0.1% (w/v) N:P:K solution (1:1:1).

The data from each experiment were analyzed based on simple (Table 2) and factorial completely randomized design (Tables 1 and 3) using the GLM method of SAS system (Release 6.12; SAS Institute Inc., Cary, NC). Means were separated by the Duncan's multiple range test (Duncan, 1995). Each experiment had five replicates that were repeated twice. Because the data did not follow a normal distribution, the number of both regenerated shoots and roots were transformed by y = √x + 0.5 before analysis.

The establishment of nodal explants in vitro occurred 3 to 4 weeks after being placed in the culture medium. After 6 weeks, the height of regenerated shoots reached 1 to 2 cm and were suitable for transfer to proliferation media (Fig. 1A). New shoots were proliferated in the P1-P9 media after 1 month (Fig. 1B). Proliferation rate was proportional to BAP level with a significant difference observed between BAP levels (P ≤ 0.05). As BAP concentrations in the culture media increased, the number of axillary shoots/explants also increased. The highest proliferation rate was recorded in the P3 medium containing 2 mg·L−1 BAP with an average of three adventitious shoots/explants (Fig. 2). Neither IBA nor its interaction with BAP was found to have a significant impact concerning proliferation.

For rooting, it was found that NAA was not capable of inducing root formation (data not shown). Roots were however formed on media containing various concentration of IBA (Fig. 1C). Statistical differences in IBA levels (P ≤ 0.05) indicated that the root number and root length increased as IBA concentration was increased (Fig. 3). Highest root numbers and root lengths were observed in the 3R (2 mg·L−1 IBA) and 4R (4 mg·L−1 IBA) media. Although root production in 3R and 4R media was similar, rooted explants from 4R medium displayed severe leaf abscission (Fig. 1D).

Explants were successfully established in DKW medium containing 0.5 mg·L−1 BAP. The DKW has been used for tissue culture of sour cherry (Prunus cerasus L.) by Tang et al. (2001). Shoot proliferation was also best in the same medium supplemented with 2 mg·L−1 BAP, which is known as a suitable cytokinin for proliferation of Prunus species (Channuntapipat et al., 2003; Kalinina and Brown, 2007; Koubouris and Vasilakakis, 2006). As presented in this report, 2 mg·L−1 BAP was suitable for proliferation of HS314, which is in accordance with Channuntapipat et al. (2003). In contrast, Kalinina and Brown (2007) reported multiple shoot formation in the different species of ornamental Prunus spp. and the GF305 peach rootstock meristem culture by using 1 mg·L−1 BAP in Murashige and Skoog (MS) medium (Murashige and Skoog, 1962). The proliferation rate reported by these researchers varied from 50% to 100% depending on the genotype. The differences observed between Kalinina and Brown's results and ours might be the result of genotype effect.

IBA did not exert a significant effect on proliferation rate in our work. Ainsley et al. (2001a) suggested that IBA reduced the development of adventitious shoots significantly. The difference may be ascribed to the internal auxin content of HS314 explants, which is sufficient to balance the auxin and cytokinin concentrations within the plant so they can proliferate better in IBA-free media.

Root induction was achieved by treating explants in 2 mg·L−1 IBA with incubating them for 7 d in the dark followed by culture for 3 weeks in IBA-free medium in the light. IBA has been used for root induction in many Prunus spp. Kalinina and Brown (2007) achieved root induction using a two-step protocol, 4 d root induction in IBA containing medium (3 mg·L−1) followed by 3 weeks root elongation in IBA-free medium. The positive effect of light exclusion on rooting has been explained by increasing of endogenous auxin and rooting factor level (Maynard and Bassuk, 1987). However, Davis and Haissig (1993) correlated the effect of etiolation to the ability of cells in the expressing genes that are required for rooting.

Depending on Prunus genotype, culture medium used by Kalinia and Brown varied from MS to half-strength MS. Fotopoulos and Sotiropoulos (2005) reported that increasing IBA levels raised root number in both full- and half-strength MS media but root length was unaffected. According to them, reducing the mineral concentration of MS medium to half-strength increased rooting percentage. Also Tang et al. (2001) used half-strength MS medium containing 2 mg·L−1 IBA or NAA with or without an initial darkness treatment for rooting of Prunus avium L. and Prunus cerasus L. The constructive impact of diluted mineral concentration of culture medium on rooting can be attributed to the reduction of nitrogen concentration (Driver and Suttle, 1987; Sriskandarajah et al., 1990). The results obtained in the present investigation also showed that using half-strength medium improved the percentage of rooted plantlets from 66% to more than 85%.

Findings in the current research indicate that using 2 mg·L−1 BAP for proliferation and 2 mg·L−1 IBA for rooting is necessary for in vitro micropropagation of the HS314 rootstock. This is the first report of using micropropagation for this rootstock.

(A) Establishment of nodal explants of the HS314 in DKW after 6 weeks. (B) Shoot proliferation in P3 medium containing 2 mg·L−1 benzyl amino purine (BAP) after 1 month. (C) Root induction in 3R medium containing 2 mg·L−1 indole butyric acid (IBA) after 1 month. (D) Leaf abscission of an explant after being treated in 4R medium. Scale bar on A and B is equivalent to 5 mm.

(A) Transferring of plantlets to plastic pots for acclimatization. (B) Survived plantlets grown in an orchard. Scale bars on A and B are equivalent to 5 mm and 0.5 m, respectively. 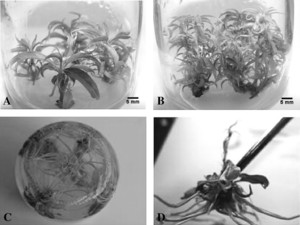 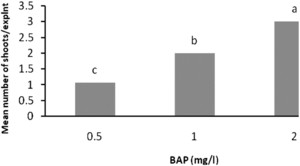 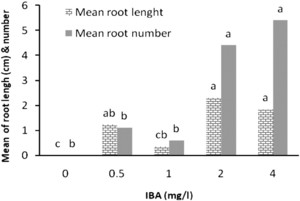 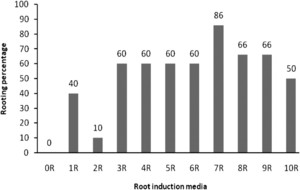 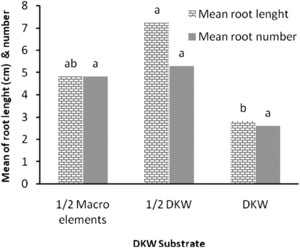 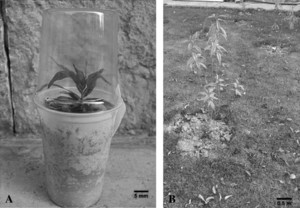