Search for other papers by Francisco J. Arriaga in
ASHS
Google Scholar
PubMedClose

Cover crops have become a vital part of no-till systems for row crops in the southern United States; however, no-till systems using cover crops for vegetable production have not been widely adopted. Only 12% of the Alabama vegetable production area is under no-till production (CTIC, 2004). A limiting factor is the lack of equipment (rollers/crimpers) needed to manage tall cover crops such as cereal winter rye (Secale cereale L.) and winter crimson clover (Trifolium incarnatum L.) in flat or ridge vegetable production systems. In addition, the tradition of plowing/disking soil in vegetable production is strong in this region. However, there is interest in the area to use cover crops in no-till vegetable systems to reduce cost and protect soil resources while increasing or maintaining yields. Cover crop use can improve soil physical properties, increase soil organic carbon, conserve soil water, reduce surface runoff, and recycle nutrients (Hubbell and Sartain, 1980; Mansoer et al., 1997; Reeves, 1994).

Cereal rye is widely used in Alabama and can produce between 3 and 11 tons/ha of biomass providing benefits such as alleopathic weed suppression and a mulch effect resulting from enhanced residue cover (Barnes and Putnam, 1983). Another widely used cover crop is the legume crimson clover, which can be used in a mixture or alone to fix atmospheric nitrogen.

To realize benefits of cover crops, the cover crops must be managed appropriately to avoid cash crop planting problems. These covers must be ended at the appropriate growth stage to generate maximum biomass. A common method to end cover crops is the use of herbicides because spraying is relatively fast and effective. However, because rye is very tall and lodges in multiple directions, planting efficiency of a cash crop can be reduced as a result of frequent delays required to clean accumulated cover residues from planting units (Kornecki et al., 2009).

Flattening and crimping cover crops by mechanical rollers in the direction parallel to planting of a cash crop is widely used in South America (especially in Brazil) to successfully end cover crops without herbicides (Derpsch et al., 1991). Because of potential environmental and monetary benefits (no use of herbicides), this technology is now receiving increased interest in North America. Ashford and Reeves (2003) indicated that when rolling was conducted at the appropriate plant growth stage (i.e., soft dough), the roller was equally effective (as chemical herbicides) at ending cover crops (94%). They concluded that rye mortality above 90% was sufficient to begin cash crop planting as a result of accelerated cover crop senescence.

Conventional tomato production typically includes deep tillage and bedded plastic mulch to minimize weed populations. Conventional tillage increases soil erosion and nutrient loss, reduces organic carbon, and increases soil strength (Blough et al., 1990; Mahboubi et al., 1993). Plastic mulch is expensive and could cause environmental problems if not removed from the field after harvest. According to Teasdale and Abdul-Baki (1995), plastic mulch increased soil temperature, which caused tomatoes grown under the plastic to produce fruit early in the season. In contrast, tomatoes grown under hairy vetch mulch systems produced fruit that was more uniform throughout the season (Abdul-Baki et al., 1996). Therefore, no-till tomato production with cover crops might be a good alternative to protect the soil and the environment while decreasing tomato production costs.

The objective of this study was to evaluate the effects of two different cover crops (rye and crimson clover) on tomato (Lycopersicon esculentum L.) yield and quality compared with plastic cover and shanks attached to a transplanter.

The study was conducted during the 2005–2008 growing seasons at the Northern Alabama Horticultural Research Station in Cullman, AL. The study was initiated in the fall of 2004 by planting two cover crops: cereal rye and crimson clover. Each fall, cover crops were planted with a no-till drill in rows 18 cm apart in plots 6.1 m long. Rye was seeded at a rate of 101 kg·ha−1, whereas clover was seeded at 28 kg·ha−1. Nitrogen was applied at a rate of 67 kg·ha−1 on rye plots in early spring each year. The experiment was established on a Hartsells fine sandy loam soil (fine-loamy, siliceous, sub-active, thermic Typic Hapludults). The experimental design was a split plot with four treatment replications. Treatments included two cover crops (cereal rye and crimson clover). For each cover crop treatment, three subsoil shank treatments were used: no shank, slim shank, and wide shank. These treatments were compared with control plots (no cover crops) using plastic mulch, which is typically used for tomato production in Alabama. Each plot was 2.8 m wide and had a single row of tomatoes in the middle of the plot with 38-cm spacing between plants.

A custom-made, retractable scale was used to measure the height of 10 randomly selected rye and crimson clover plants per plot, which were then averaged to obtain one height per plot. To determine winter cover crop biomass, plants were clipped at the ground from two randomly selected 0.25-m2 sections per plot immediately before termination. Plant samples were dried at 70 °C for 72 h and weighed to determine dry biomass. The winter cover crops were ended each spring with a mechanical roller crimper before a supplemental chemical application of glyphosate at a rate of 1.0 kg·ha−1 (a.i.) at the end of April, ≈3 weeks before transplanting tomatoes. The roller/crimper used in this experiment was 2.8 m wide and consisted of a round drum with equally spaced blunt, straight, steel bars around the drum's circumference and across the drum's length (Fig. 1). The function of the bars was to crimp or crush the cover crop stems without cutting them. The rolling process produced a uniform residue cover on the soil surface.

To alleviate the soil-compacted layer, the transplanter was modified by adding a subframe between the toolbar (with a mounted plastic tank for water/startup fertilizer) and the parallel linkage of the transplanter (Fig. 3).

The subframe was able to accommodate both commercially available shanks (subsoilers) and custom-made shanks. Subsoiler shanks were able to penetrate the heavy residue and disrupt a naturally occurring consolidated compacted soil layer to a depth of 30 to 40 cm, which is common at the experimental site in Cullman (Fig. 3). Additionally, in 2007, two driving wheels were used (one wheel on each side of the tomato row) instead of the original single wheel at the center of the row to improve stability and help minimize re-compaction of the soil opening created by the shank. As depicted in Figure 4, two different shanks were used in the experiment: a slim, 13-mm wide custom shank and a commercially available 20-mm wide shank.

A day after transplanting tomatoes, 12 temperature sensors were placed below the soil surface on selected plots in the center of the plot to collect soil temperatures (HOBO® Water Temp Pro Model H20-001; Onset Computer Corporation, Pocasset, MA) for different cover treatments during the growing season. To avoid bias in selecting tomato plants to be harvested, tomatoes were hand-picked from all 14 plants in each plot four times at the mature green to pink color stages. Fruit number and fruit weight for total (cull included) extra large, large, medium, and small sizes from each plot were recorded. Data were analyzed by analysis of variance and treatment means were separated using the Fisher's protected least significant differences (lsd) test at the 10% probability level. Cover and subsoil shank treatments were considered fixed effects and years were considered random effects (Gomez and Gomez, 1984). Where interactions between treatments and weeks or years occurred, data were analyzed separately and where no interactions were present, data were combined using SAS (2001) analysis of variance Analyst's linear model.

Height and dry biomass of cereal rye and crimson clover cover crops for the 2005 through 2008 seasons. 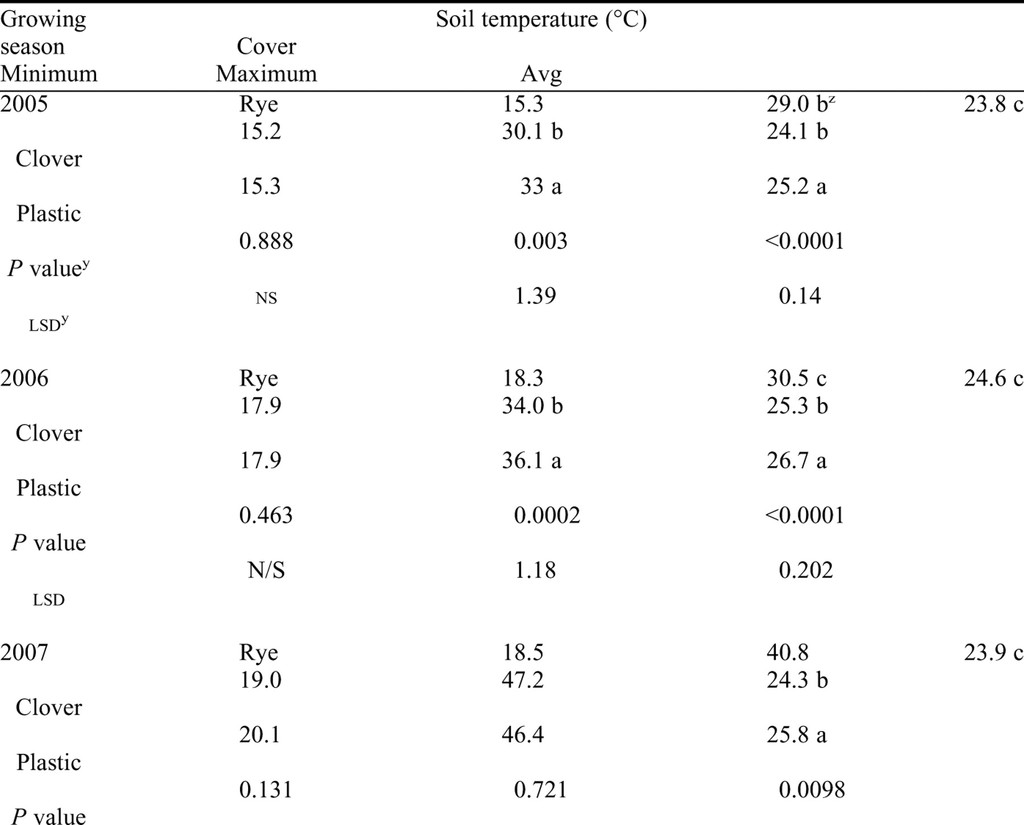 Total tomato yield in kilograms per hectare was estimated from the tomato yield in each plot. There was a significant interaction between treatments and years (P = 0.0259) for total tomato yield; thus, statistical analysis was done individually for each year. In 2005 and 2006, no significant differences were observed in total tomato yield averaged across cover treatments, producing 49,656 kg·ha−1 and 50,151 kg·ha−1 of tomato, respectively. Compared with 2005 and 2006, a significantly higher total tomato yield was produced in 2007 (60,115 kg·ha−1) and 2008 (58,905 kg·ha−1) (lsd = 4300 kg·ha−1). The main reason for lower yields in 2005 was unusually low temperatures in May after planting that hindered plant development and tomato fruiting, especially on the lower part of the plants where few or no fruit developed. In all other years, no such days with prolonged lower temperatures were observed soon after planting. Lower tomato yields in 2006 were possibly caused by delayed flowering and maturing when compared with 2007 and 2008. Rainfall almost occurred daily during a 2-week period in May 2006, and temperatures were somewhat lower this year than in 2007 and 2008. These factors combined likely delayed maturity and fruiting, as evidenced by the lateness of the first harvest relative to the other 3 years (between 10 and 15 d).

The measurable indicator for tomato quality is marketable tomato yield. With total yield, culls are included in the weight. Subtracting the culls weight from the total yield resulted in the marketable quality tomato yield. Equally, years (P < 0.0001) and year-by-treatment interactions (P = 0.0319) were significant; thus, data were analyzed individually each year. In 2005, there were no significant differences between cover crop (with three shank treatments) and plastic mulch control (P = 0.6919; Fig. 9). The average marketable yield in 2005 was 41,194 kg·ha−1.

In 2007, the highest marketable yield was calculated for rye with no shank treatment (57,416 kg·ha−1) in comparison with rye (slim and wide shanks), crimson clover (all shank treatments), and plastic mulch control (Fig. 11). Examining the soil temperature and amount of residue on the soil surface, rye residue without cutting the soil with a shank most likely conserved soil moisture better and provided better weed control compared with other treatments and as a result produced higher marketable tomato yield.

Percentage of marketable tomato yield with respect to total yield for different treatments during the 2005 through 2008 growing seasons. 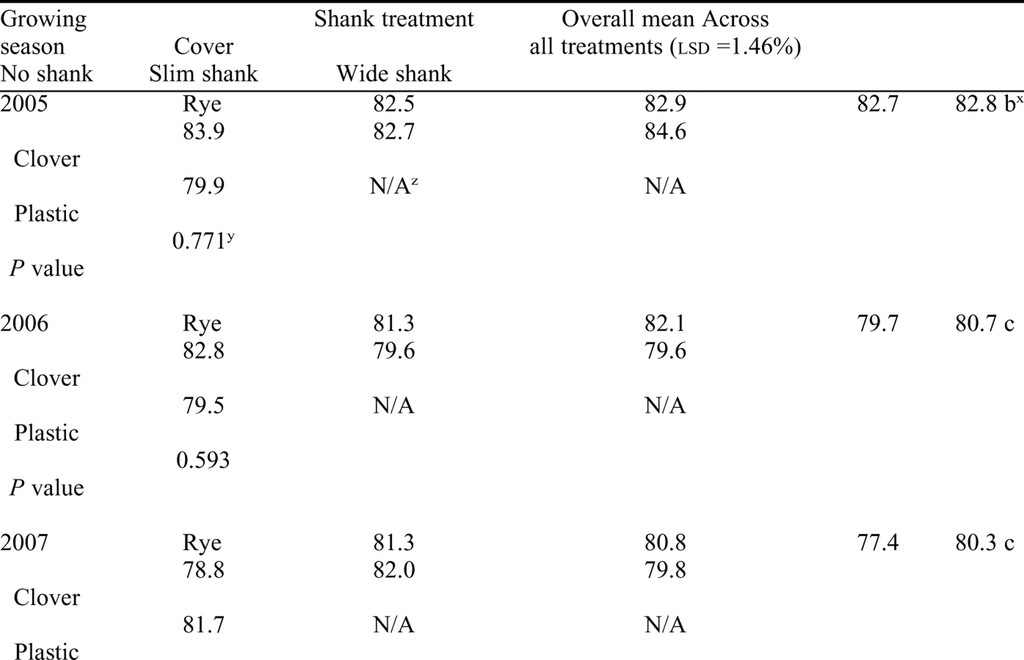 Number of fruits per plant.

Average number of tomato fruits per plant for different treatments during the 2005 through 2008 growing seasons.

Overall in all growing seasons, no differences were detected among rye and clover with slim shank and rye without shank treatments. A lower number of fruits per plant with crimson clover in 2008 for no-shank and wide-shank treatments may have been the result of higher weed competition because clover biomass was low and unevenly covered the soil compared with the higher rye residue. In fact, in 2008, crimson clover biomass production was significantly lower (6676 kg·ha−1) compared with 9670 kg·ha−1 for rye biomass (P = 0.057).

In one of four growing seasons (2008), tomatoes planted into plastic mulch cover produced higher total yield and number of fruit per plant. In 2007, when a severe drought occurred, tomatoes planted into rye residue (without shank) produced significantly higher total and marketable yield in comparison with the plastic mulch control and clover, indicating that the rye cover crop was better for conserving soil water for tomato use. Cover crops and shank treatments did not affect percentage of marketable tomato yield compared with total tomato yield.

Inexplicably, the minimum temperature for rye was higher compared with plastic and clover in 2008. In 2 years (2005 and 2006), there were no differences among treatments in total marketable tomato yield. In 2007, greater total marketable yield was recorded with rye cover and no shank. However, the plastic cover produced the greatest total marketable tomato yield. Because maximum temperature under clover during 4 years was higher than rye, it appears that higher temperature and lower clover biomass production lead to incomplete soil cover, resulting in more weed pressure and lower water availability that affected tomato yield. Use of a rye cover crop appears to be a feasible alternative to plastic mulch for tomato production in Alabama.

Side view of the modified RJ transplanter showing the subframe with the subsoiler shank and two ground-driven wheels to power the moving components.

Two different shank subsoilers used. On the left, the slim 13 mm thick; and on the right, wide-shank 20-mm thick mounted on the transplanter. Note that the overall shapes of the two shanks were similar. 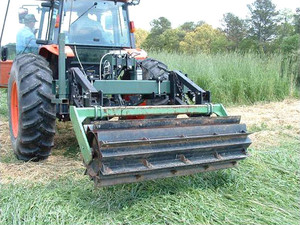 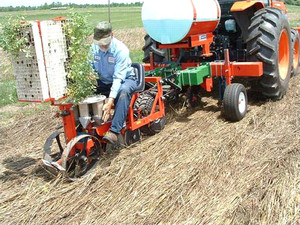 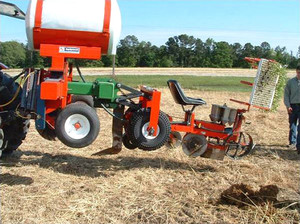 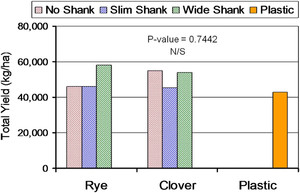 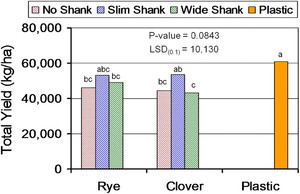 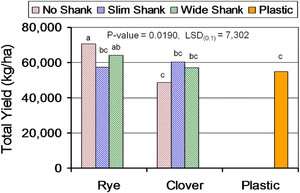 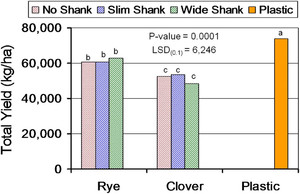 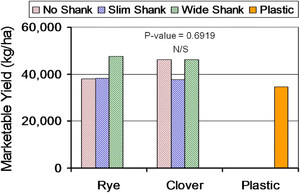 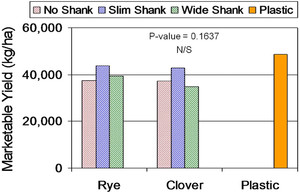 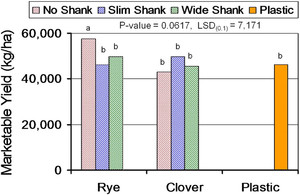 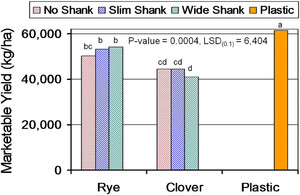