Seedless or low seed content is an important trait for fresh and processed citrus fruit in the United States and the world. Yamasaki et al. (2007) described how seedlessness in citrus can be produced by several factors, including self-incompatibility, male or female sterility, and early arrested seed after fertilization, all coupled with parthenocarpy. Similarly, Gmitter et al. (2009) described how ploidy manipulation by crossing tetraploid and diploid parents could produce seedless triploid hybrids.

Seedless citrus breeding and production constitutes a tedious and extensive effort that typically takes several years from breeding to cultivar release. Problems with seed production by cross-pollination, quantitative inheritance, production of stable polyploids, and generation of large progenies for selection are some of the constraints that a breeder has to overcome using current methods and techniques for seedless citrus improvement.

Seedlessness in C. kinokuni was proposed to be regulated by two genes, a Fs dominant gene and a Is repressor gene that inhibits seedless expression, with the ‘Mukaku kishu’ genotype being Fsfs-isis (Yamasaki et al., 2007, 2009). It was reported that the seedless expression in ‘Mukaku kishu’ is produced probably by stenospermocarpy, which is characterized by early arrested development of the fertilized seeds, without endosperm abortion, and incomplete development of the seedcoat (Yamasaki et al., 2009).

Citrus kinokuni ‘Mukaku kishu’ has been widely used in crosses with seedy citrus advanced breeding lines at the Fruit Tree Breeding Program at the University of Florida, Gainesville, FL. Advanced progenies have been evaluated for the presence or absence of seeds, but the long juvenility period and biological constrains have delayed our selection. Genomic mapping identifies markers associated with traits of interest, permitting the use of marker-assisted selection (MAS) for traits expressed in late development (Gulsen et al., 2010).

Bulked segregant analysis (BSA) is a rapid procedure used to efficiently identify markers associated with specific regions of the genome. Two pooled DNA samples composed of individuals having alternate states of a trait are generated and used to identify markers that distinguish them (Michelmore et al., 1991). Markers identified using BSA are typically closely linked to the target trait, usually within 20 cM of the target locus.

A breeding selection ‘GS’ obtained from open-pollinated progeny of Robinson tangerine was used as the female parent in crosses with Citrus kinokuni ‘Mukaku kishu’ PI539530 at the Fruit Tree Breeding Program at the University of Florida, Gainesville, FL. A population of ≈373 F1 hybrids was obtained, planted, and grown in Gainesville, FL. Plants were maintained using standard conventional cultural practices and fertility rates for citrus production.

Fruit production in the F1 hybrids was evaluated for a period of 3 to 5 years after planting. A total of 91 F1 hybrids (out of 373) produced fruit and were evaluated in two to three fruits per plant per year for at least 2 to 3 years (Fig. 1). For our study, the seedless allele was denoted as Fs and the seeded allele as fs. We did not include the Is repressor gene in our model because the segregation ratio was not consistent with ‘GS’ being heterozygous for the Is gene. Notations followed previous descriptions for seedlessness in C. kinokuni (Yamasaki et al., 2007, 2009).

Gels were scored based on presence or absence of bands with 1 = presence and 0 = absence. The band scoring patterns for each primer and locus were used as phenotypes (scoring phenotypes) for comparisons with the expected presence and absence of our desired alleles, Fs and fs from both C. kinokuni and ‘GS’, in the F1 progeny

In Stage 3, 53 RAPD primers associated with seedless allele Fs and seeded allele fs were screened with DNA of ‘GS’, C. kinokuni, and a population of 91 F1 hybrids to map the genomic region associated with the seedless trait of interest (Fig. 2C).

The chi-square “goodness-of-fit” test was used to test fit of the expected 1:1 Mendelian segregation ratios for seedlessness and the molecular markers in the F1 progeny. Association of the seedless locus and the RAPD primer phenotypes were compared using a chi-square “test of independence” with a significance level of 5%. Data analysis was performed using FREQ procedure of SAS (Statistical Analysis System Version 9.1; SAS Institute, Cary, NC). In the chi-square “test of independence,” each band was considered an observation with two possible responses: presence or absence, and each plant was considered an observation with two possible responses: seedless or seeded. The null hypothesis of the chi-square “test of independence” was that the ratio of presence/seeded, presence/seedless, absence/seeded, and absence/seedless was a 1:1:1:1 segregation ratio.

Fruit of 91 F1 hybrids were evaluated in the fall of 2009 and 2010 for presence or absence of seeds (Fig. 1). The phenotype of seedless and seeded individuals was consistent between the 2 years during fruit evaluations in 2009 and 2010 (t test, P = 1.00). The number of seedless and seeded F1 progeny was 43 and 48, respectively. The observed segregation ratio was not significantly different from the expected 1:1 segregation ratio with a chi-square “goodness of fit” of χ2 = 0.88. The seedless locus from C. kinokuni was previously described as a single dominant gene (Nesumi et al., 1992, 2001). Our results confirmed the previously proposed Fsfs genotype of C. kinokuni and indicate that the genotype of ‘GS’ is fsfs (Yamasaki et al., 2007, 2009). The segregation data does not support the presence of the Is repressor allele in this population. Of the 1200 RAPD primers screened, 70 (5.8%) and 115 (9.6%) primers amplified fragments present in C. kinokuni, absent in ‘GS’, and polymorphic between the seedless and seeded bulks, respectively (Fig. 2A; Table 1).

The first screen identified 185 RAPD primers producing markers potentially linked to the seedless locus. The potential markers from the primary screen were rescreened on three seedless and three seeded F1 individuals. This secondary screen identified 53 markers putatively linked to the Fs locus (Fig. 2B; Table 2). Of these, 28 RAPD markers appeared to be associated with the fs allele and 25 RAPD markers associated with Fs allele from C. kinokuni. Almost 75% of the RAPD primers from the original screen were removed from our experiment as a result of lack of reproducibility and association with the DNA of seedless and seeded F1 hybrids. 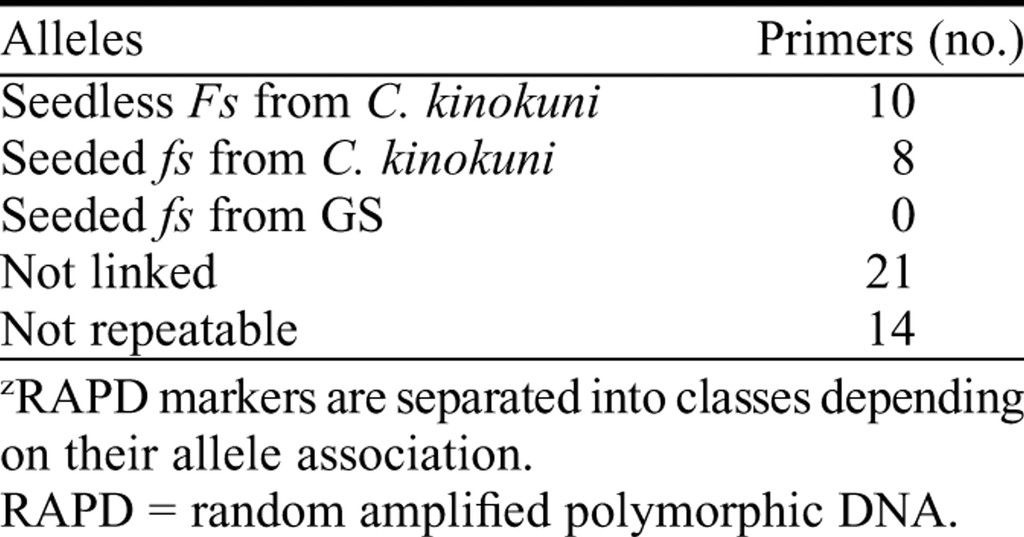 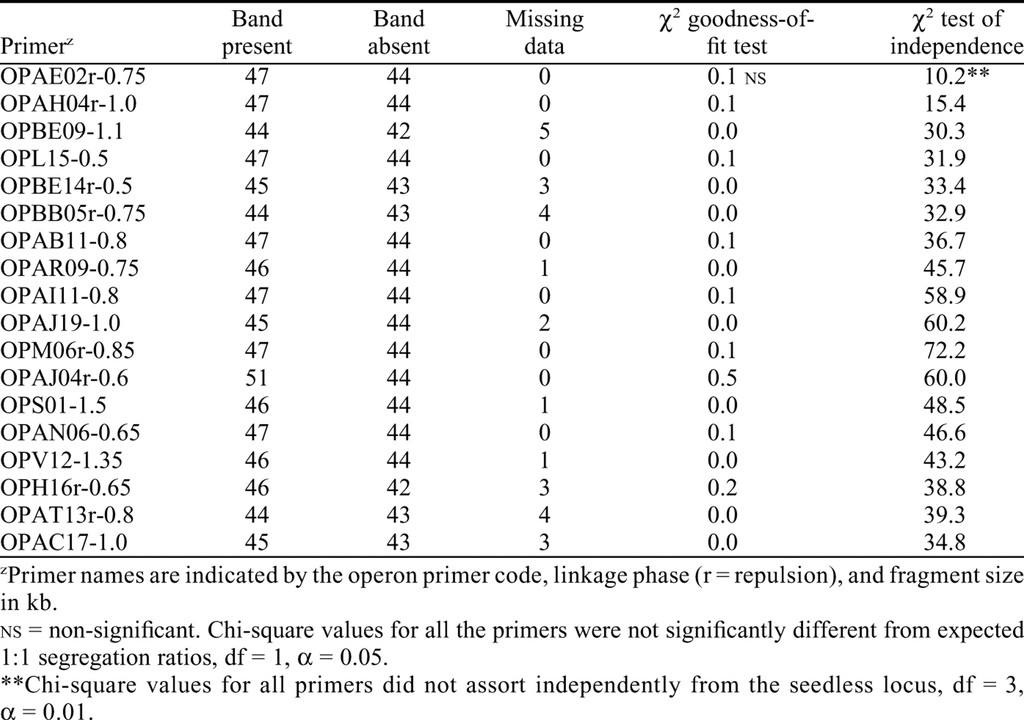 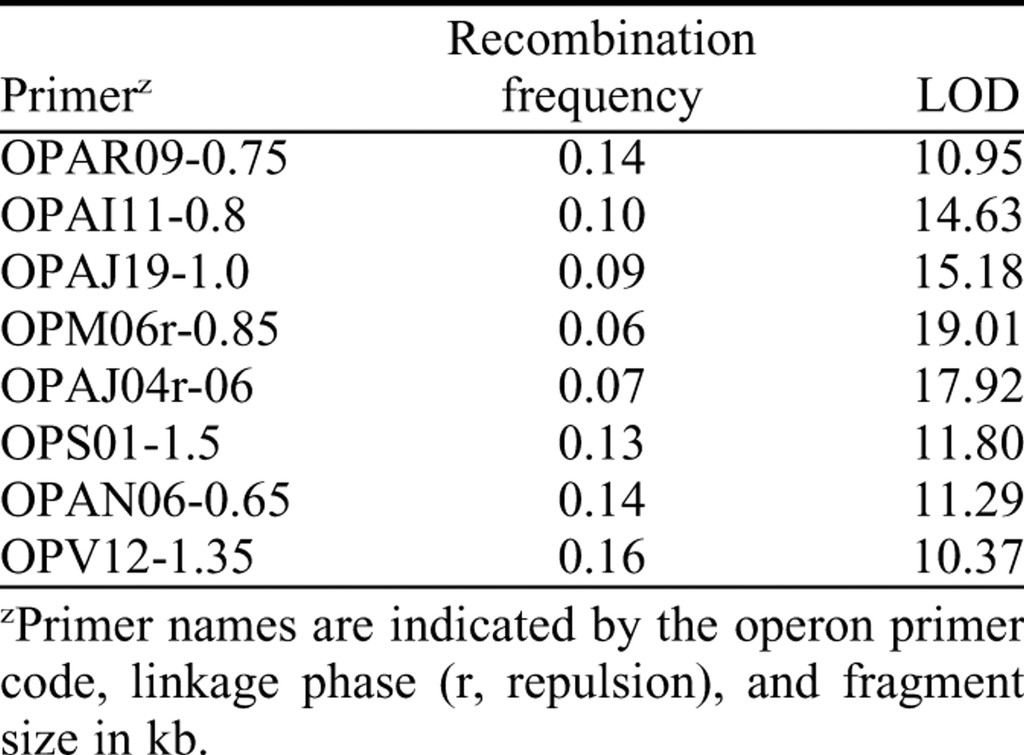 MAS for seedless citrus using OPAI11-0.8, OPAJ19-1.0, OPM06r-0.85, and OPAJ04r will allow us to identify progeny carrying the seedless locus and to rapidly distribute this gene(s) in our citrus breeding lines. Seedless individuals could be selected as young seedlings in the greenhouse. Mohan et al. (1999) described the importance of MAS and BSA in accelerating the mapping and improvement of many genes in different plant species.

One of the problems associated with MAS is the presence of false-positives resulting from recombination between the markers and the trait of interest (Mohan et al., 1999). In our study, we identified four RAPD markers within 9 cM of the seedless locus in C. kinokuni. We expect a reduction in the number of false-positives/-negatives using the four RAPD markers flanking the seedless locus. The probability of a double crossover event between the markers and the seedless locus is low compared with that of a single crossover between them. Cristofani et al. (1999) reported the importance of using several RAPD markers flanking the CTV resistance gene for selection when identifying CTV-resistant progeny in C. sunki and P. trifoliata hybrids.

In conclusion, BSA constituted a rapid method to identify the genomic region associated with the seedless locus. We have confirmed that the seedless locus originating from C. kinokuni is controlled by a single dominant allele and a total of 18 RAPD markers were mapped to a partial linkage group. Four RAPD markers, OPAI11-0.8, OPAJ19-1.0, OPM06r-0.85, and OPAJ04r-0.6, were identified within 9 cM of the seedless locus (Fig. 3). MAS of seedless individuals by the four RAPD markers, OPAI11-0.8, OPAJ19-1.0, OPM06r-0.85, and OPAJ04r-0.6, would reduce the probability of some false-positives/-negatives. Conversion of RAPD markers to sequence characterized amplified region-type markers is being pursued. The identification of RAPD markers associated with seedlessness from C. kinokuni constitutes an important tool for citrus breeding that could change and accelerate the breeding of seedless cultivars.

Partial linkage map of a population of ‘GS’ × C. kinokuni PI539530 of random amplified polymorphic DNA primers with a threshold likelihood of odds score 10. Map of the seedless locus Fs. Genetic distance (cM) between markers is presented on the left side of the linkage map using Kosambi's mapping function. Primer names are shown on the right by the operon primer code, linkage phase (r, repulsion), and fragment size in kb. Markers showing distorted segregation were not included. 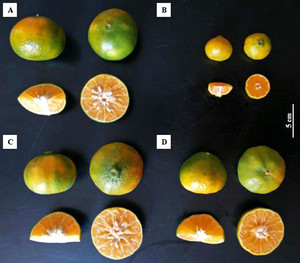 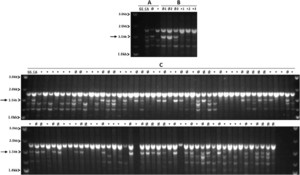