Turfgrass managers may need to reseed desirable turfgrasses into voids remaining after annual bluegrass has been eradicated by amicarbazone or other postemergence herbicides. However, the soil residual activity of amicarbazone may inhibit turfgrass seedling establishment. Therefore, the objective of this research was to determine reseeding intervals for tall fescue and perennial ryegrass after amicarbazone applications.

Experiments were conducted from March to June 2010 in Griffin, GA, and Knoxville, TN. Soil in Georgia was a Cecil sandy loam with 2% organic matter and pH of 6.4. Soil in Tennessee was a Sequatchie loam soil (fine-loamy, siliceous, semiactive, thermic humic Hapludult) with 2.1% organic matter and a 6.2 soil pH. Experiments were initiated on mature tall fescue fields at both locations. Irrigation at both locations was applied to prevent wilt and sites were mowed weekly with a rotary mower at 6.4-cm height with clippings returned. 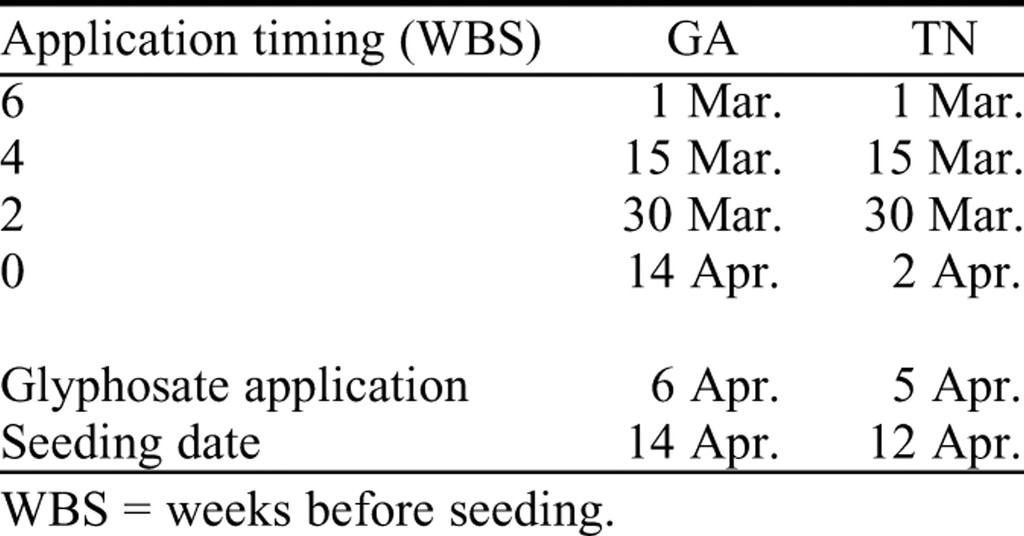 On the day of seeding, the field was scalped to 3.8 cm with a rotary mower, debris was removed, and the seedbed received two additional passes with a vertical mower set to a depth of ≈1.3 cm. Tall fescue (Titan tall fescue; Seed Research of Oregon, Inc., Corvallis, OR) and perennial ryegrass (Manhattan IV perennial ryegrass; Pure Seed Testing, Inc., Hubbard, OR) were seeded perpendicular to herbicide treatments overall plots at 390 kg·ha−1 with a drop spreader. Herbicide treatments scheduled for the day of seeding were applied immediately after seeding each turf species. After seeding, tall fescue and perennial ryegrass plots were irrigated daily to promote germination and establishment. A 10–10–10 (N-P2O5-K2O) granular fertilizer was applied at 48 kg N/ha ≈4 weeks after seeding (WAS) at each location.

Data were subjected to analysis of variance with main effects and all possible interactions tested using the appropriate expected mean square values as described by McIntosh (1983). Significant location-by-treatment interactions were detected for tall fescue and perennial ryegrass turf cover; thus, data from each location were analyzed and are presented individually. Fisher's protected least significant difference test was used to separate treatment means at the P = 0.05 level.

Tall fescue germination was noted by 2 WAS at each location but turf cover was minimal (data not shown). A treatment-by-timing interaction was detected in both Georgia and Tennessee by 4 WAS. At both locations, seedling tall fescue cover averaged 96% of the untreated control for herbicides applied 2, 4, or 6 WBS (Table 2). No significant differences in tall fescue cover were detected among amicarbazone or bispyribac-sodium treatments applied 2, 4, or 6 WBS (Table 2). 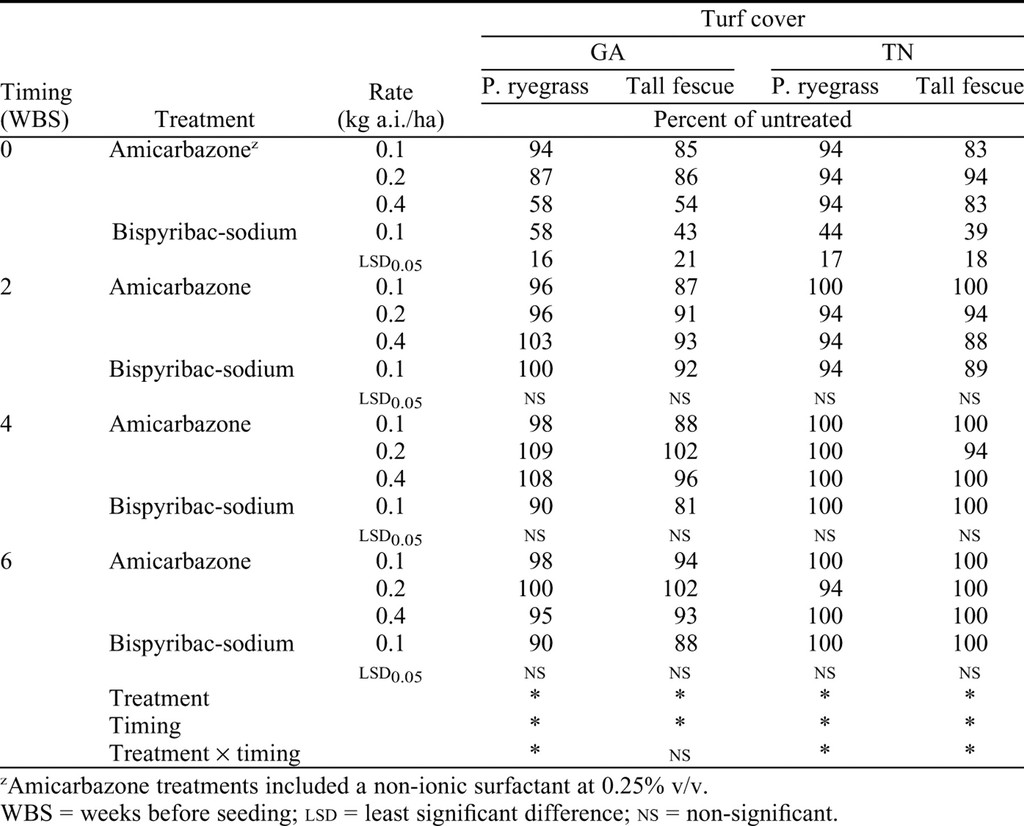 Significant reductions in tall fescue seedling cover were recorded 4 WAS at both locations for herbicide treatments applied the day of seeding. In Georgia, amicarbazone at 0.4 kg·ha−1 and bispyribac-sodium reduced tall fescue cover 46% and 57%, respectively, when applied the day of seeding (Table 2). Amicarbazone treatments were similar and did not reduce tall fescue cover more than 15% from the untreated when applied at 0.1 or 0.2 kg·ha−1 at seeding.

Similar to what was observed in Georgia, bispyribac-sodium applied the day of seeding in Tennessee reduced tall fescue cover. In Tennessee, bispyribac-sodium reduced tall fescue cover (relative to the untreated control) 61% compared with only 17% for amicarbazone at 0.4 kg·ha−1 at 4 WAS. Lycan and Hart (2006b) reported a similar effect for bispyrabic-sodium applied 1 WBS creeping bentgrass, kentucky bluegrass, and perennial ryegrass. In contrast to what was observed in Georgia, no significant differences were detected among the three amicarbazone rates at 4 WAS in Tennessee. Tall fescue cover reductions after amicarbazone treatment ranged from 6% to 17% (Table 2). Similar responses were observed 8 WAS in Tennessee as well (Table 3).

Effects of amicarbazone and bispyribac-sodium applications on ‘Manhattan IV’ perennial ryegrass and ‘Titan’ tall fescue groundcover at 8 weeks after seeding in field experiments in Knoxville, TN. 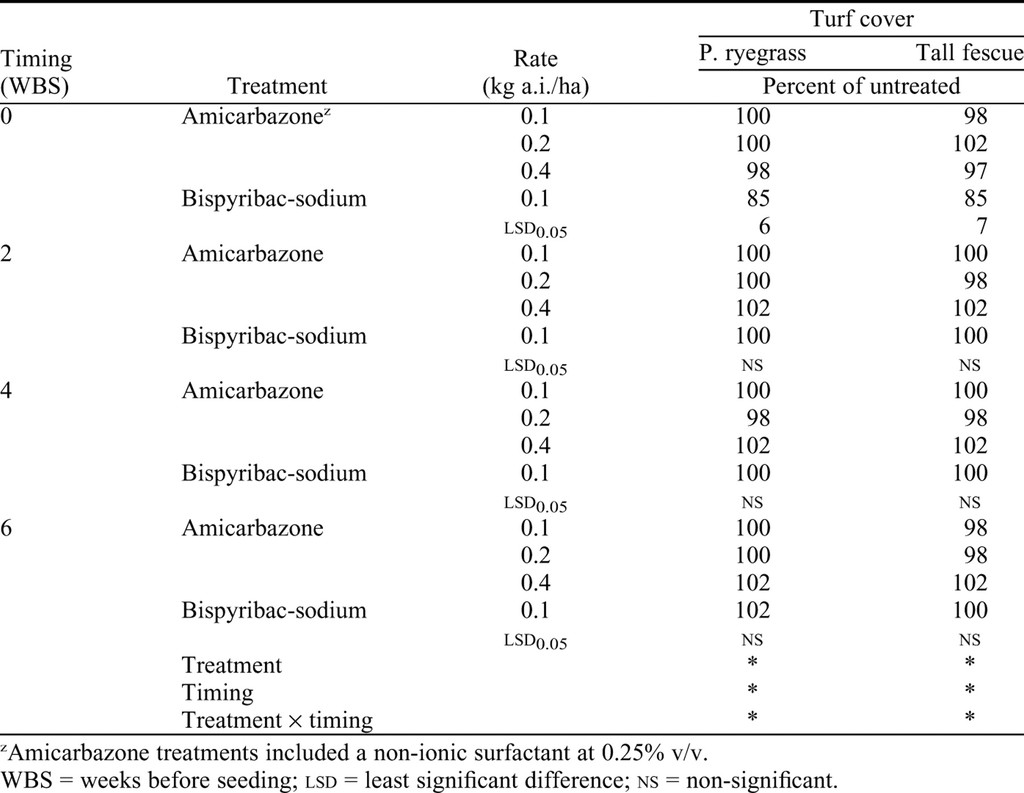 Although a direct statistical comparison was not made, treatment effects on perennial ryegrass establishment were similar to those observed on tall fescue at each location. Seedling perennial ryegrass cover averaged 96% of the untreated control for herbicides applied 2, 4, or 6 WBS in both Georgia and Tennessee with no significant differences detected among amicarbazone or bispyribac-sodium treatments at these timings (Table 2).