Uptake and Distribution of Boron in Coconut and Paurotis Palms

Effects of leaflet position within a leaf of coconut palm (A) and paurotis palm (B) and sampling position within the central leaflets of the youngest fully expanded leaf of coconut palm (C) and paurotis palm (D) on foliar boron concentrations. Different letters above bars indicate statistical differences between means at P < 0.05 level using analysis of variance and the Waller–Duncan k-ratio method. Vertical lines represent ses. n = 12 (coconut) or 6 (paurotis).

Effects of soil-applied boron (B) on coconut palm B concentrations in leaf2, the youngest fully expanded leaf at the time of application (A) and the youngest fully expanded leaf at the time of sampling (B). Boron was applied at 0 months with control plants receiving no B. Leaf numbers refer to the age rank of leaves within the canopy. Leaf 0 is the spear leaf, leaf1 the next oldest leaf, etc. As new leaves emerged, they were assigned numbers of –1, –2, etc., according to the order of their emergence. Differences between means within a sampling time (month), as determined by analysis of variance, are indicated above the +B bar (ns, *, **, and *** indicate non-significance or significance at P = 0.05, 0.01, and 0.001, respectively). Vertical lines on bars represent ses. n = 6 replicate samples per treatment.

Effects of soil-applied boron (B) on change in foliar B concentrations (ΔB) of leaves 1 through 20 of coconut palm at 1 (A) or 2 (B) months after application. An asterisk over the second bar in a pair indicates significance of analysis of variance (ns, *, **, and *** indicate non-significant or significant at P = 0.05, 0.01, and 0.001 levels, respectively). Vertical lines on bars represent ses. n = 6 replicate samples per treatment. 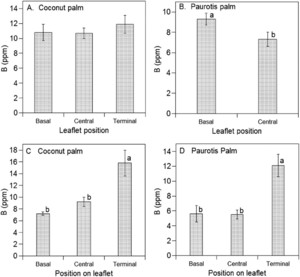 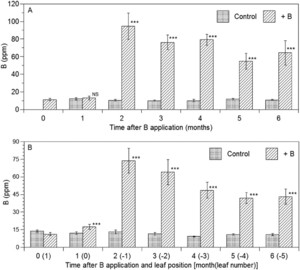 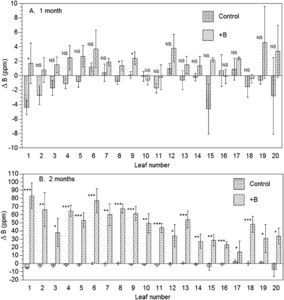