In addition to breeding cultivars for commercial blueberry (Vaccinium sp.) production, ornamental value has been a trait of interest for many blueberry breeders for a number of years (Galletta and Ballington, 1996). An older dwarf cultivar released for ornamental purposes, ‘Tophat’ (Moulton et al., 1977), has been around for some time, yet it is still popular today for small patio areas and container gardening. There are a number of traits that make a blueberry cultivar relevant for the ornamental industry, most having to do with aesthetic appeal for the home gardener based on some novel characteristic such as plant growth habit, fall color development, attractive berry color, large berry size, etc. Recent ornamental releases gaining popularity are the pink-fruited blueberry selection ARS 96-138 (being marketed as ‘Pink Lemonade’) and the home gardener cultivar Blue Suede that has attractive light blue fruit and good fall leaf color (Ehlenfeldt and Finn, 2007; NeSmith and Ehlenfeldt, 2010).

In keeping with pursuit of home gardener appeal, ‘Summer Sunset™’ is a new blueberry hybrid (Vaccinium sp.) being jointly released by the University of Georgia College of Agricultural and Environmental Sciences, the University of Georgia Agricultural Experiment Station, and the U.S. Department of Agriculture–Agricultural Research Service for the ornamental and homeowner market. The new cultivar ripens around the time of the older early-ripening commercial rabbiteye blueberry (V. ashei Reade) cultivars Climax and Premier often available to home gardeners in the Southeast through retail nursery outlets (Brightwell and Draper, 1975; Krewer and NeSmith, 2006). The new cultivar offers considerable visual appeal for the consumer through its multicolored berries as the fruit ripens.

‘Summer Sunset™’ is a complex blueberry hybrid containing mostly rabbiteye germplasm (Fig. 1). The new cultivar was selected by D. Scott NeSmith in 2005 at the Georgia Experiment Station in Griffin, GA (selection T-885) from a group of seedlings of the cross ‘Climax’ × US 1056 made by Mark Ehlenfeldt with USDA-ARS in Chatsworth, NJ. ‘Climax’ is an older standard rabbiteye cultivar (V. ashei Reade), whereas US 1056 is a breeding line with a complex pedigree containing V. ashei Reade, V. constablaei Gray, V. corymbosum L., and V. darrowi Camp. ‘Summer Sunset™’ ripens around the time of the early-ripening commercial rabbiteye cultivars Climax and Premier. However, the new cultivar produces an abundance of multicolored berries as they ripen (Figs. 2 and 3). Berries are generally medium size (14 to 16 mm in diameter) and typically progress in color [based on the Royal Horticultural Society's Color Chart (RHS)] from RHS yellow–green 145 C, to RHS orange–red 34 C and N34 C, to RHS red 47 C, to RHS red–purple 59 C, to RHS black 202 A when fully ripe. Fruit are slightly tart when first ripe and gradually sweeten as they hang. The plant of ‘Summer Sunset™’ is vigorous, reaching a height of 1.2 m with a canopy width of more than 0.6 m on 3-year-old plants grown in acidic soil (pH less than 5.2) with pine bark amendment. The non-glaucous foliage is attractive during the spring and summer months having an upper leaf surface color of RHS green 137 D and a lower leaf surface color of RHS 138 D on healthy, fully mature leaves. Fall foliage color is nondescript with complete defoliation usually occurring in early winter. ‘Summer Sunset™’ is estimated to have a chilling requirement of 500 to 550 h below 7 °C and is estimated to perform well in USDA hardiness zones 6b through 9a.

‘Summer Sunset™’ has limited commercial blueberry production value. Its primary features are unique multicolored berries as fruit ripens and non-glaucous foliage, which make it attractive for ornamental purposes while also producing edible fruit. It has established well at research field sites in both Alapaha, GA (sandy soils having a pH less than 4.9; amended with pine bark) and Griffin, GA (sandy clay loam soils having a pH less than 5.2; amended with pine bark). Fruit and plant data from five-plant plots (4-year average) are listed in Table 1 for ‘Summer Sunset™’ compared with the two early-ripening rabbiteye cultivars Climax and Premier grown under field conditions at Alapaha, GA. Plants were established in Fall 2006, and data are averages for 2008 to 2011. The new cultivar has shown very good plant vigor and a reasonable cropload. Berry size has been similar to ‘Climax’ but smaller than ‘Premier’. ‘Summer Sunset™’ berries do not have much of the waxy bloom that is typically a favorable commercial trait that gives blueberries a light blue color. However, this lack of waxy bloom adds to the ornamental appeal of the new cultivar. Table 2 presents 4-year average (2008 to 2011) data for ‘Summer Sunset™’, ‘Climax’, and ‘Premier’ plants grown in five-plant plots in Griffin, GA, since Fall 2006. At this site, the new cultivar had very good plant vigor and a good cropload as compared with the two rabbiteye standards, whereas ripening time of ‘Summer Sunset™’ tended to be ≈1 week later than the rabbiteye cultivars.

Average fruit and plant ratings of ‘Summer Sunset™ and two rabbiteye (‘Climax’ and ‘Premier’) standard cultivars over a 4-year period (2008–2011) at Alapaha, GA.z

Average fruit and plant ratings of ‘Summer Sunset™’ and two rabbiteye (‘Climax’ and ‘Premier’) standard cultivars over a 4-year period (2008–2011) at Griffin, GA.z

A patent for the cultivar has been applied for using the selection number T-885. The cultivar has limited licensees and should be available (at least in limited quantities) as ‘Summer Sunset™’ in 2012. For licensee listings, contact the University of Georgia Research Foundation, Technology Commercialization Office, GSRC Boyd Building, Athens, GA 30602–7411. (http://www.ovpr.uga.edu/tco/), because they control all propagation rights. 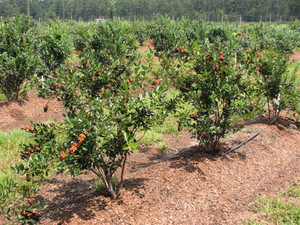 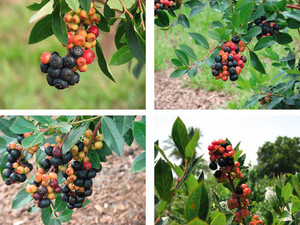