The Agricultural Research Service, U.S. Department of Agriculture, released the high β-carotene cucumber (Cucumis sativus var. sativus L.) line EOM 402-10 in Jan. 2011. Line EOM 402-10 was made available to U.S. cucumber breeders to supply a source from which they may develop elite germplasm possessing high levels of β-carotene as a natural source of vitamin A to the human diet (i.e., improve nutritional value of cucumber). This germplasm is fixed for genes controlling the expression of β-carotene in mature (2 to 5 cm in diameter) greenhouse-grown fruit (Cuevas et al., 2010). Therefore, line EOM 402-10 can be used directly in breeding programs for the introgression of three β-carotene genes (Cuevas et al., 2010; Navazio and Simon, 2001) into elite germplasm. Moreover, the relatively short life cycle of cucumber (3 to 4 months) makes EOM 402-10 an attractive candidate for use in functional genomics studies that seek to clarify carotenoid accumulation in higher plants.

Initially, seeds from EOM 402, LOM 404, and EOM 400 were germinated, and ≈100 plants were transplanted at the three-leaf stage to enclosed cages (3) in 2003, where bees were introduced to increase seed of each population. Subsequently, mature fruit of 50 plants from each of these populations were evaluated visually in the field at Hancock, WI, in the summer of 2004 for the expression of orange flesh color (i.e., β-carotene accumulation). Eleven plants from the EOM 402 population were selected, and meristem cuttings were taken and grown to maturity in a greenhouse (Madison, WI). Plants obtained from these meristem cuttings were self-pollinated and intercrossed, and mature greenhouse-grown fruits were evaluated visually for relative degree of mesocarp and endocarp pigmentation. Individual plants bearing fruits with orange interiors and possessing U.S. pickling market traits were selected. Fruits derived from self-pollinations were visibly more orange than those derived from sib-pollinations. Therefore, selection for orange pigmentation and inbreeding was conducted using self-pollinated fruit in a greenhouse for four generations to produce an S4 line (a selection from EOM 402) designated ‘EOM 402-10’ (in 2007) that produced true-breeding orange-pigmented fruit (i.e., orange flesh color; Fig. 1). 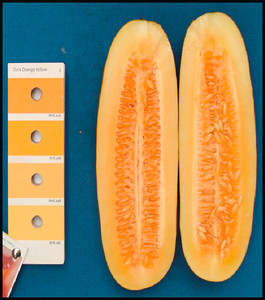