Caladiums (Caladium ×hortulanum Birdsey, Araceae Juss.) are ornamental aroids valued for their bright colorful leaves. They are commonly used as container and landscape plants. Pink cultivars have been very popular and the most popular pink cultivars have been Carolyn Whorton, Fannie Munson, and White Queen (Bell et al., 1998; Deng et al., 2008). They ranked No.1, No.3, and No. 4 in acreage (or popularity) according to a 2003 survey of the caladium cultivars commercially grown in Florida, where more than 95% of the caladium tubers used in the world are produced (Bell et al., 1998; Deng et al., 2008). Developing new pink cultivars has been an important breeding objective for the University of Florida/Institute of Food and Agricultural Sciences caladium breeding program.

UF-172 is a fancy-leaved cultivar uniquely characterized with large attractive pink blotches and red petioles. It is intended for use in large containers and sunny landscapes. It has demonstrated high tuber yield potential and performed well in container forcing and landscape use. Its performance as a pot or landscape plant was significantly better than ‘Carolyn Whorton’, ‘Fannie Munson’, or ‘White Queen’. ‘UF-172’ also sprouts earlier than these existing commercial cultivars. These characteristics should benefit growers producing tubers, those marketing potted or bedding plants, and consumers and landscapers using caladiums.

‘UF-172’ (Fig. 1) was initially selected in 2004 as GCREC-3141 out of a population of progeny from a cross made in 2003 between ‘White Christmas’ and ‘Red Flash’ (Fig. 2). ‘Red Flash’ was used as the male parent because of its plant vigor, performance in large containers and landscapes, large tubers, large plant and leaves, and tolerance to sun burns. ‘White Christmas’ was selected as one of the parents because of its large blotches and growth habit when grown in containers. The ancestry of these cultivars is unknown.

Field plots were organized in a randomized complete block design consisting of three replications, and each plot contained 30 propagules. Tubers were dug in Dec. 2006 and Jan. 2008, respectively. Dried tubers were weighed and counted per plot. They were then graded by maximum diameter: No. 2 (2.5 to 3.8 cm), No. 1 (3.8 to 6.4 cm), Jumbo (6.4 to 8.9 cm), Mammoth (8.9 to 11.4 cm), and Super Mammoth (greater than 11.4 cm). The production index (PI), an indicator of economic value of the harvested tubers, was calculated as: N (No. 2) + 2N (No. 1) + 4N (Jumbo) + 6N (Mammoth) + 8N (Super Mammoth) in which N = number of tubers in each grade. An analysis of variance was conducted using the GLM procedure in the SAS program (SAS Institute, 2009) to compare the performance of ‘UF-172’ with that of three commercial cultivars, Carolyn Whorton, Fannie Munson, and White Queen. ‘Carolyn Whorton’ is the most popular and productive cultivar with pink blotches, somewhat similar to ‘UF-172’ in leaf coloration pattern. ‘Fannie Munson’ and ‘White Queen’ rank No. 3 and No. 4, respectively, in acreage among all pink commercial cultivars (Bell et al., 1998; Deng et al., 2008).

The suitability of ‘UF-172’ for container forcing was evaluated by forcing tubers in 11.4-cm containers and comparing them with forced plants of ‘Carolyn Whorton’, which has long been valued for its pot performance. ‘UF-172’ could be marketed in the same leaf color/coloration pattern as ‘Carolyn Whorton’. No. 1 tubers were planted either intact or de-eyed in a peat/vermiculite mix (VerGro Container Mix A; Verlite, Tampa, FL) on 26 Mar. 2007. The study was conducted in a greenhouse with 45% light exclusion during the summer in Wimauma, FL. Average daily temperatures ranged from a low of 16 °C at night to 29 °C during the day during the experiment. Potted plants were arranged on metal benches in the greenhouse in a randomized complete block design with 10 replications. Plant height, number of leaves, and foliar characteristics were recorded 8 weeks after planting.

‘UF-172’ is intended for use in large containers and landscapes. It has demonstrated potential to yield well in tuber production and to perform well in container forcing and landscape use. Its performance as a pot or landscape plant was significantly better than ‘Carolyn Whorton’, currently the most popular fancy-leaved pink cultivar on the market. ‘UF-172’ has the potential to produce prefinished or finished pot plants several days to 1 week earlier than ‘Carolyn Whorton’. In pot caladium plant production, tuber de-eyeing will be required for production of ‘UF-172’ in small containers (10 to 15 cm diameter). In the landscape, ‘UF-172’ can be planted in sunny or shady locations.

Although extensive research and evaluations of these cultivars have been performed on small acreages, tuber producers are encouraged to plant only limited quantities of ‘UF-172’ until they have gained experience in producing these cultivars. Standard postharvest treatment of tubers is recommended (Harbaugh and Tjia, 1985) and pre-plant hot water treatment of tubers (Rhodes, 1964) is encouraged to prolong their life. 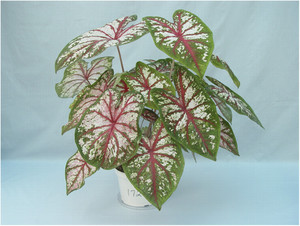 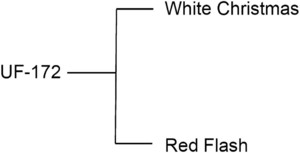