‘Vergina’ is a late July-maturing pear (Pyrus communis L.) cultivar originating from a cross between the pear cultivars Kristali and Santa Maria. Annual fruit production per tree of ‘Vergina’ grafted on quince BA 29 rootstock over a period of 4 years (from the sixth until the ninth year of the trees) averaged 53 kg. Fruits are pyriform with a mean equatorial diameter of 44 mm, a mean length of 64 mm, and a mean weight of 135 g. The flesh is yellow–white, juicy, flavorful, and aromatic with very few stone cells. The skin is smooth, free of russeting, and has no tendency to become waxy in storage. Fruits mature on the tree in late July, coincide with ‘Kalliopi’, ‘Coscia’, and ‘Tosca’, and 12 d earlier than ‘Santa Maria’ and ≈42 d earlier than ‘Williams’. Two harvests are required under moderately cropped conditions. Total soluble solids, firmness, and total titratable acidity were not different among ‘Vergina’ and ‘Kalliopi’. However, ascorbic acid content, total antioxidant capacity, and total phenols of ‘Vergina’ were lower than ‘Kalliopi’. After harvest, fruits can be kept at room temperature for ≈2 weeks or they can be refrigerated in common cold storage rooms in air at 1 °C for ≈2 months.

In Greece, the total pear production in 2009 was 80,000 t and acreage was 4,000 ha [FAO (Food and Agriculture Organization), 2009]. The main pear cultivars grown in Greece are Kristali and Williams. ‘Vergina’ (modern name of “Aigai”, the first capital of the Macedonian kingdom in ancient Greece) was derived from a cross between the pear (Pyrus communis L.) cultivars Kristali and Santa Maria (pollen parent) made in the late 1960s at the Greek Pomology Institute by the researcher G. Syrgiannidis, who also made the initial selection. The evaluation and the description of this genotype was done in the Greek Pomology Institute that is located in Naoussa and in private orchards in the same area (northern Greece, long. 22°12′0″ E; lat. 40°29′04″ N; elevation 225 m). The mean maximum temperature of the experimental area is 38 °C in July, whereas the mean minimum temperature is –7 °C in January. The soil of the experimental orchard at a depth of 0 to 60 cm was characterized as a sandy loam, slightly alkaline (pH 7.32), with low electrical conductivity (0.79 mS·cm−1) and low organic matter (1.77%) content. Soil nutrient contents were (mg·kg−1): phosphorus 42, potassium 285, calcium 519, magnesium 139, manganese 18, zinc 3, iron 26, and boron 0.25 (mg·L−1) in the saturation extract of the soil. The objective of this research was to provide information about the new pear cultivar Vergina and to compare it with the cultivar Kalliopi that matures at the same period.

The evaluation was performed in a private orchard. Productivity data reported are means of 50 trees (five replications × 10 trees) for 4 years analyzed as a randomized complete block design. All other fruit characteristics reported were based on a random sample of 30 fruits selected from all of the fruits collected from the 50 trees in each year. The significance of the differences between means was evaluated by using Fisher's t test analysis of variance at P < 0.05 carried out by SPSS Version 17 (SPSS Inc., Chicago, IL).

When scions were grafted on ‘Provence’ quince (BA 29; Cydonia oblonga Mill.) rootstock, trees were moderately vigorous with a fairly upright habit. The conformity of scion and rootstock in the combination ‘Vergina’/BA 29 was satisfactory. Scaffold branch angle was 34° to 48° from vertical. Performance has not yet been tested on other rootstocks. Trees were grafted in situ and started producing fruits 2 to 3 years later. Grafting on dwarfing or semidwarfing rootstocks is applied in a mass scale in pear and apple cultivation (Koutinas et al., 2010). Maximum production was reached at the seventh year. Trees set annual heavy crops unless there are unfavorable weather conditions during anthesis. When trees set heavy crops, thinning (to single king fruits 10 to 15 cm apart) was necessary to improve fruit size and to avoid biennial bearing. Leaf nutrient concentrations were within the range proposed by Bergmann (1988) (data not shown). The cultivar is not sensitive to any nutrient deficiency. Over a period of 4 years (from the sixth until the ninth year of the trees), the annual fruit production per tree of ‘Vergina’ grafted on BA 29 rootstock averaged 53 kg and was higher than ‘Kalliopi’ (Table 1). The experimental trees of both cultivars were of the same age, planted at distances 4 × 2 m apart and trained as a palmette. Bark color of 1- to 2-year-old shoots is gray. Branch lenticels are oval, 0.4 to 0.6 mm in diameter, and gray–white. Mixed buds are born on 1-year-old shoots and spurs generally are found on 2-year-old or older shoots.

Productivity, fruit weight, fruit equatorial diameter, and fruit length of the pear cultivars Vergina and Kalliopi over a period of 4 years.

The leaves are oval with the following dimensions: length of 80 mm, width of 67 mm, leaf area of 4000 mm2, and leaf perimeter of 257 mm. Leaf measurements were made with a portable leaf area meter, AM 300 (ADC Bioscientific Ltd., Hertfordshire, U.K.). Leaf surfaces are smooth, the dorsal surface is shiny, and there is no pubescence. The petiole is yellow–green, 40 mm long, and 1.7 mm wide (Fig. 1). Leaf fall occurs in late November.

The trees require cross-pollination. Flowering period starts in the last 2 d of March (mean of 10 years) and has good overlap with that of ‘Coscia’, ‘Gentile Bianca’, and ‘Collete’, although compatibility with these has not been tested. Flowering of the cultivars Santa Maria and Kristali starts at 6 Apr. and 28 Mar., respectively. Cross-compatibility studies showed that suitable pollenizers of ‘Vergina’ include the Greek cultivars Syrgiannidis (Syrgiannidis et al., 2010) and Kalliopi (Sotiropoulos et al., 2009). Full bloom of ‘Vergina’ is ≈2 d later than the cultivars Syrgiannidis and Kalliopi. Flowers have white oval petals and pink anthers. Stamens are white and 4 to 5 mm long. The pistils are 4 to 5 mm in length, rounded, fused at the base, and they are at the same height as the stamens. The pollen is yellow.

Fruits are pyriform with a mean equatorial diameter of 44 mm, mean length of 64 mm, and mean fruit weight of 135 g (Table 1; Fig. 2). Fruit weight and fruit length of ‘Vergina’ was higher than ‘Kalliopi’, whereas fruit diameter was lower. The flesh is yellow–white, juicy, flavorful, aromatic, and with very few stone cells. The diameter of the core is ≈2.2 cm. The skin is smooth, free of russeting, and has no tendency to become waxy in storage. The pedicel of the fruit is green and medium in length (≈24 mm). The calyx tends to be persistent, inconspicuous, and apressed to the pistillate end at maturity. Fruit mature on the tree in late July, coincident with ‘Kalliopi’, ‘Coscia’, and ‘Tosca’, 12 d earlier than ‘Santa Maria’, 17 d earlier than ‘Kristalli’, and ≈42 d earlier than ‘Williams’. ‘Vergina’ can be considered as an alternative to ‘Coscia’ and ‘Tosca’ because from our data it is concluded that they do not differ in terms of fruit size, storage life, or several quality parameters such as firmness, total soluble solids, and acidity. Two harvests are required under moderately cropped conditions with a ≈1-week interval. Measurements reported were from samples taken at the first harvest. When harvested, the skin is green with red blush where exposed to sunlight. With regard to harvest maturity indices, the most commonly used by the growers are the total soluble solids content and the change of ground color from green to light yellow. Mature fruits of the cultivars Kalliopi and Vergina were evaluated immediately after harvest. Total soluble solids (measured with the Atago PR-1 electronic refractometer; Atago Co. Ltd., Tokyo, Japan), flesh firmness (as measured by an Effegi penetrometer using an 8-mm probe; Effegi, Milan, Italy), and total titratable acidity (expressed as malic acid) of the juiced flesh as described by Koukourikou-Petridou et al. (2007) were not different among cultivars (Table 2). However, ascorbic acid content (measured by oxalic acid 1%), total antioxidant capacity, and total phenols (Singleton et al., 1999) of ‘Vergina’ were lower than ‘Kalliopi’ (Table 2). Total phenols were expressed as milligrams gallic acid equivalents per gram fresh weight (FW). Sample extracts were analyzed for their antioxidant activity by the ferric-reducing antioxidant power (FRAP) assay (Benzie and Strain, 1996) using a Camspec M106 spectrophotometer (Camspec Analytical Instruments Ltd., Leeds, U.K.) at 593 nm. The FRAP values of the samples were expressed as μmol L-ascorbic acid equivalents per gram FW. After harvest, fruits can be kept at room temperature for ≈2 weeks or they can be stored successfully for up 2 months in air at 1 °C (Syrgiannidis, 1992).

In conclusion, ‘Vergina’ is a promising summer pear cultivar.

‘Vergina’ pear has been registered in the official list of the Greek Ministry of Agriculture in 1991. We have not yet applied for a protection according to UPOV (International Union for the Protection of New Varieties of Plants) guidelines.

Leaves of the pear cultivar Vergina.

Fruits of the pear cultivar Vergina. 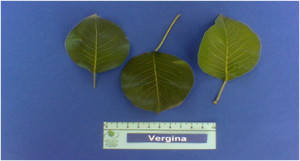 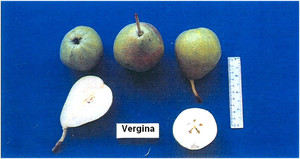