‘PC7064-3’, trademarked as Selah®, is a new sweet cherry (Prunus avium L.) for fresh market production released from the Washington State University (WSU) Sweet Cherry Breeding Program. In the Pacific Northwest of the United States production areas, ‘PC7064-3’ is a late midseason cultivar, maturing 10 to 14 d after ‘Bing’, and is an alternative for the maturity period of the standard cultivar Lapins (Lane and Schmid, 1984). ‘PC7064-3’ is one of the largest-fruited selections tested in the WSU Sweet Cherry Breeding Program, routinely averaging 12 g per fruit. Although ‘PC7064-3’ is self-fertile, it is only moderately productive compared with traditional self-fertile cultivars (e.g., Lapins, Sweetheart).

‘PC7064-3’ originated at Prosser, WA, from a cross between ‘P8-79’ and ‘Stella’ made in 1970 by Tom Toyama, the former stone fruit breeder at Washington State University (Fig. 1). ‘Stella’ is a productive, good-quality sweet cherry notable as the first widely used breeding source for the self-fertility mutation (Lapins, 1971). ‘P8-79’ resulted from a backcross between ‘Rainier’ and ‘Bing’, but other than pedigree, no further information for that breeding selection is known. On release, the original testing number, PC7064-3, was used for the patent designation. The trademark initially pursued for ‘PC7064-3’ was Liberty Bell. However, the inability to trademark the name Liberty Bell necessitated the change in name to Selah®. Therefore, some reference may be found to Liberty Bell, particularly in trade publications.

The original seedling tree located in block D37-101 at Washington State University's Irrigated Agriculture Research and Extension Center (WSU-IAREC) Roza Farm was selected in 1976 and propagated on Mazzard (P. avium) rootstock for further testing in 1977. Budwood of ‘PC7064-3’ was made available worldwide to cooperators beginning in the early 1980s. Additional test trees were propagated on various clonal rootstocks in 1998 and planted in a trial for yield evaluation at Prosser, WA. ‘PC7064-3’ was advanced to elite test selection in 1998 by Greg Lang and released in 2003 by Matthew Whiting and the Washington State University Research Foundation and patented (USPP 16,135) on 29 Nov. 2005.

‘PC7064-3’ is a vigorous tree with an upright-spreading growth habit, similar to ‘Bing’. Leaves are large (up to 16 cm in length), lanceolate in shape with an acuminate tip, and serrulate margins. Leaf petioles are short to medium, and there are several large, oval nectary glands at the base of each leaf.

Original field notes for ‘PC7064-3’ indicated the selection was self-fertile, late-maturing, with a healthy vigorous tree. Fruit quality was noted as high with very large, firm fruit but light skin and flesh color. These trees remain planted at WSU-IAREC today. ‘PC7064-3’ was originally identified as a late midseason complement to the standard cultivar Bing (Table 1). However, the average harvest date is now nearer to the current late to midseason standard ‘Lapins’, but ‘PC7064-3’ produces consistently larger fruit. When examined microscopically, ‘PC7064-3’ had the largest estimate of mesocarp cell numbers, affirming the genetic potential of this cultivar for large fruit size (Olmstead et al., 2007). Among the more than 50 scion genotypes evaluated for fruit quality annually in the WSU fruit quality laboratories, ‘PC7064-3’ is routinely the largest with individual fruit weight occasionally reaching 20 g. On seedling Mazzard rootstock, ‘PC7064-3’ has somewhat low productivity. Like with many self-fertile genotypes, when propagated on dwarfing, precocious rootstocks such as ‘Edabriz’, ‘Gisela®5’, and ‘Gisela® 6’, ‘PC7064-3’ can crop excessively, resulting in reduced fruit size (Table 2). However, with well-managed trees on ‘Gisela® 5’ and ‘Gisela® 6’, the percent marketable yield has been greater than 83% in trials (Table 2). No resistance to common Pacific Northwest diseases such as powdery mildew and bacterial canker has been noted (Olmstead and Lang, 2000). 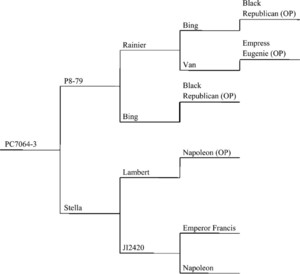 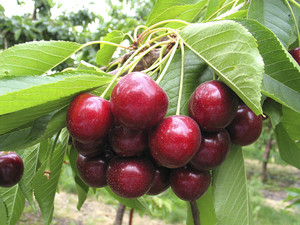 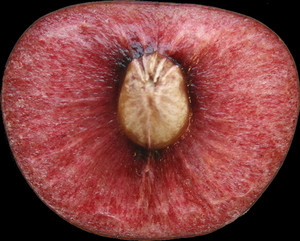