‘PC7146-8’, more commonly known under the trademarked name Benton®, is a new sweet cherry (Prunus avium L.) for fresh market production released from the Washington State University Sweet Cherry Breeding Program. In the Pacific Northwest of the United States production areas, ‘PC7146-8’ is a midseason alternative to the standard cultivar Bing. ‘PC7146-8’ is similar in size to ‘Bing’ but blooms 3 to 5 d later, matures 1 to 2 d earlier, is self-fertile, has a higher resistance to rain-induced cracking, and has consistently been highly ranked in local comparisons of fruit organoleptic qualities (Long, 2006).

‘PC7146-8’ originated at Prosser, WA, from a cross between ‘Stella’ and ‘Beaulieu’ (Fig. 1) made in 1971 by Tom Toyama, the former stone fruit breeder at Washington State University. ‘Stella’ is a productive, good-quality sweet cherry notable as the first widely used breeding source for the self-fertility mutation (Lapins, 1971). ‘Beaulieu’ was an early-maturing selection of unknown origin obtained from the U.S. Plant Introduction and Quarantine Station as PI 131203. The cross ‘PC7146-8’ was made to meet the breeding program goal for developing early maturing, self-fertile, high fruit quality sweet cherry cultivars. The name used in the patent designation, ‘PC7146-8’, was the original testing number for the selection. The trademark initially pursued for ‘PC7146-8’ was Columbia. However, the inability to trademark the name Columbia necessitated the change in name to Benton®. Therefore, some reference may be found to Columbia, particularly in trade publications.

The original seedling tree located in block B54-82 at Washington State University's Irrigated Agriculture Research and Extension Center Roza Farm was selected in 1976 and propagated on P. avium (Mazzard) rootstock for further testing. Budwood of ‘PC7146-8’ was made available worldwide to cooperators beginning in the early 1980s. Additional test trees were propagated on Mazzard rootstock with ‘Montmorency’ (Prunus cerasus L.) interstem in 1983 and on various clonal rootstocks in 1998 for yield evaluation at Prosser, WA. ‘PC7146-8’ was advanced to elite test selection in 1998 by Greg Lang and released in 2003 by Matthew Whiting and the Washington State University Research Foundation and patented (USPP 15,847) on 12 July 2005.

‘PC7146-8’ is a vigorous tree with an upright-spreading growth habit, similar to ‘Bing’. Leaves are very large (up to 19 cm in length), lanceolate in shape with an acuminate tip and cuneate base, and dentate margins. Leaf petioles are medium to long, and there are one to two large, oval, red nectary glands at the base of each leaf.

‘PC7146-8’ averages four reproductive buds per fruit spur on P. avium rootstock, and the long-term bloom observations at Prosser, WA, indicate full bloom is 3 to 5 d after ‘Bing’, which makes it more likely to escape frost damage than ‘Bing’. ‘PC7146-8’ is self-fertile, and its S-locus genotype of S4′S9 was determined using the S-RNase primer pair Pru-C2 and PCE-R as described by Ikeda et al. (2005). Because self-pollination has been successful with ‘PC7146-8’, the presence of the S4′ mutant allele conferring self-fertility was inferred from observation of the S4 allele using this primer pair. These attributes make ‘PC7146-8’ more attractive to growers than ‘Bing’. Fruit of ‘PC7146-8’ are large, reniform in shape, with a very shallow suture (Fig. 2). The stem bowl is flattened at the pedicel and rounded toward the shoulders. Stem length is long (up to 50 mm), but diameter tends to be thin. Fruit skin is medium thick with a mahogany red color [Royal Horticultural Society (RHS) N186B; RHS, 1966, 1986, 1995]. Fruit flesh is red (RHS 59C) with a semifree stone (Fig. 3). The stone is small, oval with an acuminate tip, rounded base, and a prominent ridge.

The original field notes for ‘PC7146-8’ indicated the selection was self-fertile, late-blooming, with a healthy vigorous tree. Fruit quality was noted as high with large, firm fruit but light flesh color. On selection to elite status, ‘PC7146-8’ was identified as a potential replacement for the midseason standard cultivar Bing. The average harvest date, fruit size and shape, and deep mahogany red color of the fruit are very similar to those of ‘Bing’ (Table 1). However, ‘PC7146-8’ has the advantage of being self-fertile and has consistently been evaluated as having excellent flavor (likely as a result of higher soluble solids) in local consumer trials (Long, 2006). On seedling Mazzard rootstock, productivity of ‘PC7146-8’ was somewhat low compared with other self-fertile cultivars. Like with many self-fertile genotypes, when produced on dwarfing, precocious rootstocks such as ‘Edabriz’, Gisela® 5, and Gisela® 6, ‘PC7146-8’ can crop excessively, resulting in reduced fruit size (Table 2). However, with well-managed trees on Gisela® 5 and Gisela® 6, the percent marketable yield has been greater than 82% in trials (Table 2). No resistance to common Pacific Northwest diseases such as powdery mildew and bacterial canker has been noted (Olmstead and Lang, 2000). 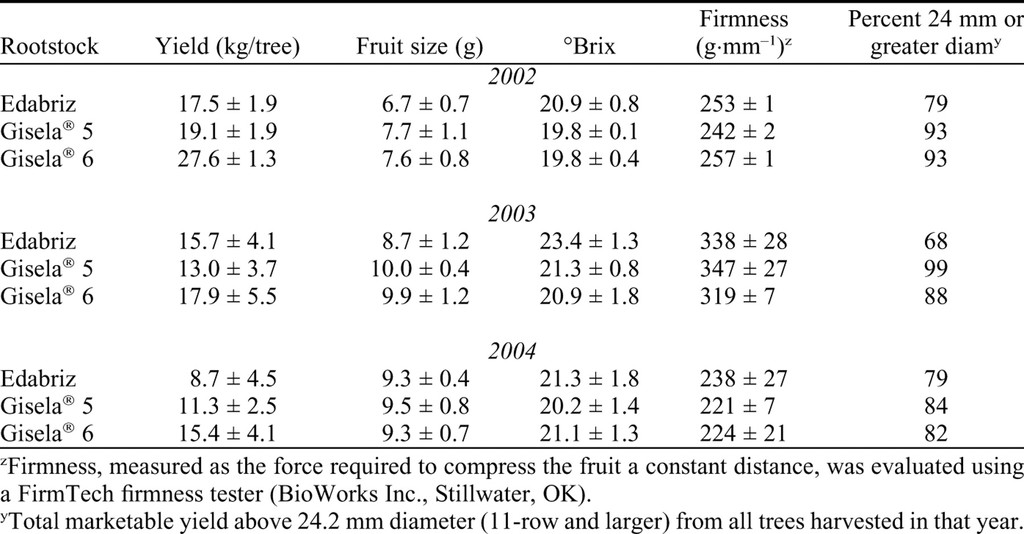 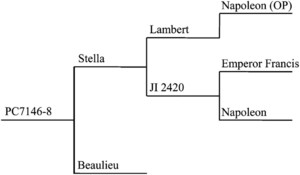 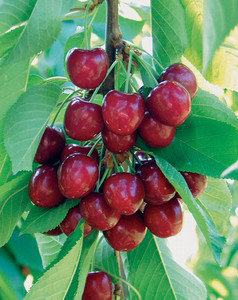 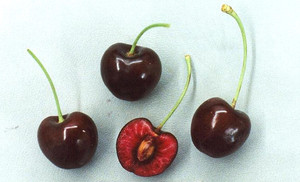