The Animal Pigment Bilirubin Identified in Strelitzia reginae, the Bird of Paradise Flower

Strelitzia reginae Aiton is an iconic plant known for its vibrant orange and blue inflorescences. Floral pigments include carotenoids and the anthocyanin delphinidin-3-rutinoside. S. reginae has black seeds with vivid orange arils, yet the basis for the orange color is unknown. We recently discovered bilirubin in the arils of S. nicolai. Previously, this pigment was known only to exist in animals as a breakdown product of heme. Using high-performance liquid chromatography (HPLC) and HPLC/electrospray ionization–tandem mass spectrometry, we now show that bilirubin is the primary aril pigment of S. reginae and is also present in low concentrations in its sepals (less than 44.0 ng·g−1).

Strelitzia reginae Aiton is an iconic plant known for its vibrant orange and blue inflorescences. Floral pigments include carotenoids and the anthocyanin delphinidin-3-rutinoside. S. reginae has black seeds with vivid orange arils, yet the basis for the orange color is unknown. We recently discovered bilirubin in the arils of S. nicolai. Previously, this pigment was known only to exist in animals as a breakdown product of heme. Using high-performance liquid chromatography (HPLC) and HPLC/electrospray ionization–tandem mass spectrometry, we now show that bilirubin is the primary aril pigment of S. reginae and is also present in low concentrations in its sepals (less than 44.0 ng·g−1).

Strelitzia reginae (family Strelitziaceae, order: Zingiberales), the Bird of Paradise plant, is an herbaceous monocot native to South Africa but widely cultivated in warm temperate and tropical regions. Aside from the shape of its inflorescence, which resembles the head of a bird, S. reginae is also admired for its brilliant floral coloration. Each flower is composed of three vibrant orange sepals and three blue petals (Fig. 1A). At least 19 carotenoids are present in the sepals (Simpson et al., 1975; Tappi and Menziani, 1955), and the anthocyanin delphinidin- 3-rutinoside is found in the petals (Harbourne, 1967). Anthocyanins are stored in the vacuole of petal cells (Kronsteadt and Walles, 1986), whereas carotenoids in mature sepal tissue are stored in spindle-shaped chromoplasts (Simpson et al., 1975). Petal color is enhanced by papillar processes in the epidermis, which refract light (Kronsteadt and Walles, 1986).

In contrast to the conspicuous flowers, the capsular fruit of S. reginae is pale and partially obscured by the bract during development. However, at maturity, the capsule breaks open to reveal intensely colored orange arillate seeds (Fig. 1B–C). Remarkably, aril color remains unchanged years after cell death, a quality that likely contributes to the continued attraction of avian frugivores (Frost, 1980). We recently found the orange tetrapyrrole bilirubin to be the primary pigment in the arils of Strelitzia nicolai, a close relative of S. reginae (Pirone et al., 2009). Bilirubin was previously known in the animal kingdom where it is produced as a breakdown product of heme. Preliminary high-performance liquid chromatography (HPLC) and ultraviolet-visible (ultraviolet) spectrometry analyses suggested that bilirubin is also present in the arils of S. reginae. We were therefore interested in whether this unusual pigment is indeed present in those arils and whether it is also present in the flowers. We used HPLC/ultraviolet and HPLC/ultraviolet/electrospray ionization–tandem mass spectrometry (HPLC/ultraviolet/ESI-MS/MS) to investigate these questions. We also observed the aril cells using light microscopy to determine the location of pigment within the aril and sepal cells.

Sepal tissue was collected from a single clonal plant at Fairchild Tropical Botanic Gardens in Miami, FL. Aril tissue was obtained from two plants at Ellison Horticulture Pty Ltd. in Allston, Australia. It was not possible to analyze aril and sepal tissue from the same individuals. S. reginae flowers in Miami but does not set fruit. Bilirubin is known to decompose in heat, light, and oxygen. Preliminary analyses did not indicate that bilirubin is stable in sepal tissue, but they did suggest that bilirubin is stable in aril tissue for at least several months, likely as a result of the high lipid content of the tissue. Therefore, it was necessary to analyze fresh sepal tissue from local plants, but it was possible to analyze imported aril tissue.

For each sepal sample, 20.0 g of fresh tissue was ground in a blender with 100 mL methanol for 2 min and was then filtered through a Buchner funnel. The residue was re-extracted with 50 mL of chloroform in a mortar and pestle, and this procedure was repeated until sepals were colorless. Methanol and chloroform extracts were pooled, and 100 mL of water was added. The mixture was left in a separatory funnel for 5 min and then the (lower) chloroform layer was collected, filtered with a polytetrafluoroethylene 0.2-μm filter, and divided into two equal aliquots. Each aliquot was dried to completion in a rotovap at 30 °C. For each aril sample, 0.05 g tissue from a single aril was ground by a mortar and pestle and extracted with chloroform repeatedly until the chloroform extracts were colorless. As described previously, the chloroform extract was filtered, divided into two equal aliquots, and dried on a rotovap. Sepal and aril tissue were sampled in duplicate. To determine the presence of bilirubin, one aliquot from each sample was analyzed by HPLC and the second aliquot was analyzed by HPLC/ESI-MS/MS.

HPLC/ultraviolet analyses were performed on a Thermo-Finnigan SpectraSystem HPLC apparatus with a variable wavelength PDA detector (SMC1000, P4000, AS3000, UV6000LP; Thermo Electro Corporation, San Jose, CA). Extract was redissolved in dimethylsulfoxide (DMSO), partitioned with hexane to remove lipids, and chromatographed on a reverse-phase ODS-A column (5 μm, 150 mm × 4.3 mm i.d.; Waters Corporation, Milford, MA). Mobile phase A was 0.1% formic acid in methanol, and mobile phase B was 0.1% formic acid in water. The HPLC gradient (at 1.0 mL·min−1) was started at 40% A and increased linearly to 95% A over 40 min, then held constant at 95% A and 5% B for 10 min. Bilirubin was identified by comparing the retention time and ultraviolet-visible spectra of S. reginae pigments with bilirubin standard (Sigma-Aldrich, St. Louis, MO), which had a retention time of 42.9 min and a maximum absorbance at 444 nm in the HPLC solvent system described previously. Bilirubin concentrations were determined by comparison with a standard curve [(R2 = 0.995) estimated detection limit = 20 ng injected on column] (Fig. 2).

Concentration of bilirubin in S. reginae arils and sepals.

The plant extract was redissolved in DMSO (Certified ACS; Fisher Scientific, Pittsburgh, PA) and analyzed by reverse-phase C8 HPLC/ultraviolet/ESI-MS/MS using both positive and negative ESI and a number of different MS scans. HPLC/ultraviolet was performed with an Agilent Technologies HPLC with binary pumps (1100 series; Santa Clara, CA), a Symmetry C8 HPLC column (5 μm, 2.1 × 150 mm; Waters Corporation), and an Agilent ultraviolet-visible detector (G1314A). The mobile phase A was 0.2% acetic acid [glacial, biochemical grade (99.8%); ACROS Organics, Morris Plains, NJ, USA) in H2O (HPLC grade, Honeywell Burdick & Jackson, Muskegon, MI] and mobile phase B was 0.2% acetic acid in acetonitrile (LC-MS grade; Honeywell Burdick & Jackson). The HPLC gradient (at 0.2 mL·min−1) was started at 20% B at time 0 and increased linearly to 85% B over 30 min and then increased linearly to 100% B over 15 min. The column was held at 100% B until monitoring of the ultraviolet/MS signal showed no further elution of peaks. For some extracts, this was more than 150 min. The ultraviolet-visible response was monitored at 450 nm for bilirubin, which eluted at ≈39 min.

All mass spectrometry data were obtained with a Finnigan MAT (San Jose, CA) LCQ classic quadrupole ion trap mass spectrometer equipped with an ESI. The ESI was operated with a nitrogen sheath and auxiliary gas flows of 65 and 5, respectively (unitless, software parameter) with a spray voltage of 3.3 kV and a heated capillary temperature of 250 °C. The heated capillary voltage was +15 V and –22 V for (+) and (–) ESI, respectively, whereas the tube lens was operated at 0 V for both ESI polarities. Collision-induced dissociation (CID) was conducted with a parent ion isolation of 3 u, CID energy of 37.5%, qCID of 0.25, and CID time of 30 ms.

Sepal and aril tissues were observed in a Leica Model DME brightfield compound microscope with a 40× objective and photographed using a Nikon CoolPix 4500 camera (2272 × 1704 pixels). Tissues were sectioned by hand and mounted in water.

Bilirubin was present in both the aril and sepal extracts of S. reginae. Each HPLC/ultraviolet analysis of the aril extracts showed a single peak with retention time and ultraviolet-visible spectrum that matched those of the bilirubin standard (Fig. 3). Bilirubin identification was confirmed by HPLC/ESI-MS/MS (Figs. 4 and 5). Bilirubin was also identified in sepal samples by HPLC/ESI-MS/MS (Fig. 6) but was not detected by HPLC/ultraviolet, even after treatment with diazomethane. The concentration of bilirubin in the sepals was less than 44.0 ng·g−1 of fresh tissue (n = 2), whereas the average concentration in the aril was 17.4 mg·g−1 fresh tissue (n = 2) (see Table 1 for concentration values of all samples).

The low sample size was adequate for ensuring the detection of bilirubin in S. reginae, because false-positives may have occurred through contamination of the sample or the equipment but not by chance alone. Contamination was avoided by the washing of glassware multiple times (soap and water, acetone, chloroform), the use of disposable vials when possible, and changing gloves after the analysis of each sample. Blank(s) were run between all chromatographic procedures to avoid the carryover of bilirubin between samples and ensure a flat baseline.

In the arils, bilirubin is not only present in high concentration, but it is also the primary pigment and is thus responsible for color production. In contrast, it is likely that the low concentration of bilirubin in the sepals precludes it from contributing significantly to color. Furthermore, high concentrations of sepal carotenoids (Simpson et al., 1975; Tappi and Menziani, 1955) likely mask low levels of bilirubin. Whether bilirubin serves a function other than color production in S. reginae remains unclear.

In mature aril tissue, bilirubin was present as granular bodies irregularly distributed throughout the cell (Fig. 1D). In mature sepal tissue, we observed elongate structures (Fig. 1E), which were previously identified as containing carotenoids (Simpson et al., 1975). We saw no evidence of pigment bodies that might contain bilirubin.

This study provides new insight into color production in an iconic tropical plant.

It also demonstrates the first example of bilirubin in a flower and verifies the presence of bilirubin in a plant species other than S. nicolai. Coupled with further research on the function, distribution, and synthesis of bilirubin in plants, this information may be of use for practical applications such as the manipulation of color through breeding and genetics.

High-performance liquid chromatography chromatograms of (A) bilirubin standard and (B) aril extract of S. reginae. 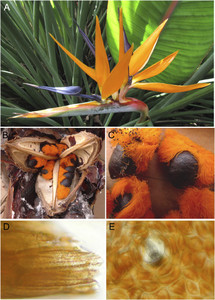 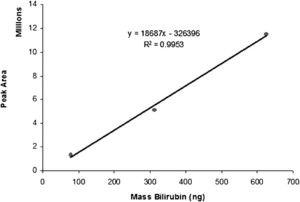 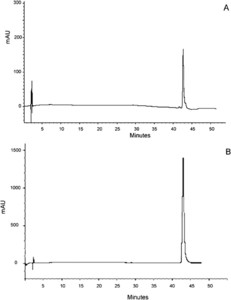 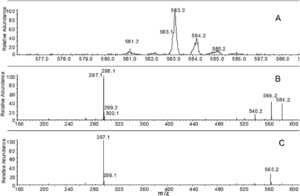 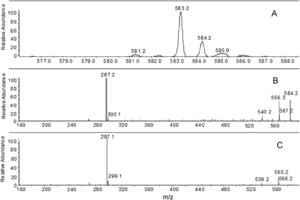 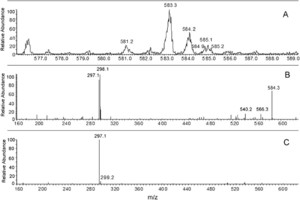