Viburnums (Genus Viburnum L.; Family Adoxaceae E.Mey., nom. cons.) comprise a diverse genus with ≈160 species and taxa found primarily in the northern temperate regions of the Americas, Europe, and Asia [U.S. Department of Agriculture (USDA), ARS, National Genetic Resources Program, 2010; Winkworth and Donoghue, 2005]. They are versatile shrubs that have become a mainstay of American landscapes for their showy and often fragrant spring blooms, richly colored sometimes evergreen foliage, and persistent winter fruit. Valued as a tough shrub that can tolerate various environmental stresses, over three million viburnums are sold annually in the United States with a wholesale value of over $22 million (National Agricultural Statistics Service, 1998). Over 100 named cultivars exist with some of the most popular cultivars derived from the species V. ×burkwoodii Burkwood & Skipwith, V. carlesii Hemsl., or V. plicatum var tomentosum Miq. among others (Dirr, 2007; Krüssmann, 1978).

The viburnum breeding program at the U.S. National Arboretum was begun in the 1950s by the late Donald R. Egolf with the objectives of developing improved viburnum cultivars using diverse parental material that had a combination of fragrant and colored flowers, small stature, evergreen or brilliantly colored fall foliage, and showy fruit (Egolf, 1962). This program has resulted in the release of 20 viburnum cultivars (Egolf, 1966, 1971, 1979, 1981a, 1981b, 1986a, 1986b, 1988), including the latest two, ‘Cree’ and ‘Nantucket’, described here.

‘Cree’ (NA62293; PI583788) is a seedling selection grown from open-pollinated seed collected from Viburnum rhytidophyllum Hemsl. that originated from wild-collected seed (NA49608) brought to the United States by Theodore Dudley in 1980. The mother plant from which the original seed was collected was found in the Shennongjia Forest District, Western Hubei Province, China, at an elevation of ≈2100 m. ‘Cree’ was initially selected for replicated field trials by D.R. Egolf in 1989 and evaluated by cooperators in Alabama, California, Connecticut, Michigan, Missouri, New Jersey, New York, North Carolina, Ohio, Pennsylvania, Tennessee, Texas, and Virginia. It was named and released by G.R. Johnson, former National Arboretum scientist, in 1994.

‘Nantucket’ (NA69852; PI651840) was selected from a cross made in 1988 by D.R. Egolf of V. ‘Eskimo’ × V. macrocephalum f. keteleeri (Carriere) Rehder. The female parent, ‘Eskimo’, was derived from open-pollinated seed from the cross [(V. carlesii Hemsl. × V. ×carlcephalum Burkwood ex R.B. Pike) × V. utile Hemsl.]. The male parent came from seed wild-collected by T. Dudley in Chekiang Province, China, in 1980. The plant was initially selected by R. Dix in 1997 and sent to cooperators in Alabama, Georgia, Illinois, Maryland, Massachusetts, Michigan, New Jersey, Ohio, Ohio, Tennessee, Texas, Virginia, Washington, and West Virginia for evaluation between 2000 and 2003. It was named and released by Margaret Pooler in 2008.

The cultivar names ‘Cree’ and ‘Nantucket’ were registered in 2010 with the International Cultivar Registration Authority for Viburnum in accordance with the International Code of Nomenclature for Cultivated Plants (Brickell et al., 2004). Like previous viburnum introductions from the U.S. National Arboretum, these cultivars were named after Native American tribes. Herbarium specimens of each of these cultivars were collected by the author and deposited at the U.S. National Arboretum Herbarium as horticultural standards (Viburnum rhytidophyllum ‘Cree’ Pooler NA62293 and Viburnum ‘Nantucket’ Pooler NA69852).

Viburnum rhytidophyllum ‘Cree’ is an evergreen, fairly upright, multistemmed, coarse-textured shrub that reached a height of 2.5 m and a width of 2 m in 12 years of growth in Washington, DC (USDA Hardiness Zone 7b; USDA, 1990). The foliage is similar to that of the species with mature lanceolate leaves ≈14 cm long by 4 cm wide, acute at the tips and obtuse at the base with entire leaf margins. The adaxial (upper) leaf surface is corrugated and glabrous, whereas the abaxial surface is tomentose. Foliage is dark green (Royal Horticultural Society [RHS] 137A; Royal Horticultural Society and Flower Council of Holland, 1986) on the adaxial leaf surface. White to cream-colored flowers appear on flattened cymes 8 to 10 cm in diameter in mid-May in Washington, DC. Red fruit (drupes) ripen to near black and can persist into winter (Fig. 1).

Viburnum ‘Nantucket’ is a semievergreen upright, relatively compact shrub that has reached a height of 4 m and a width of 2 m in 16 years of growth in Washington, DC (Fig. 2). Leaves are elliptical, up to 12 cm long by 5 cm wide, acuminate at the tip and obtuse at the base with crenate leaf margins. Foliage is dark green (RHS 139A) on the adaxial surface and yellow–green (RHS 147B) on the abaxial surface. White branched inflorescences, containing sterile florets around the margin and interspersed in the inflorescence (Fig. 1), are 10 to 13 cm in diameter and appear in mid-May in Washington, DC. Fruit ripen from red to black, although fruit set is generally light.

Statements and recommendations on plant performance and culture are based on information provided by nursery and university cooperators in multiple locations examining an average of three plants per site as well as plant performance in replicated trials at the U.S. National Arboretum. ‘Cree’ is adaptable to the same cultural conditions as plants of the species and will perform best in full sun to part shade in a moist but well-drained soil. It is hardy in USDA hardiness Zones 5 to 8 (USDA, 1990) with some dieback occurring in colder or more exposed locations. ‘Nantucket’ can be cultivated under diverse environmental conditions but grows best in full sun to light shade in a heavy loam soil. It is hardy to USDA Zone 6, although it may be semideciduous or lose flower buds in extreme winters.

Both cultivars can be propagated from softwood or semihardwood cuttings taken in the spring after flowering using intermittent mist and a rooting compound containing 1000 to 3000 ppm indole-3-butyric acid. Plants are suitable for either field or container production. ‘Nantucket’ is well suited to commercial production with propagules producing flowers on small plants the first summer after propagation.

Both cultivars are appropriate in the landscape as a single specimen plant, an evergreen hedge, in a mass planting, or as a backdrop in the shrub border. ‘Cree’ was selected primarily for its somewhat slower growth rate and more compact size compared with the species. ‘Nantucket’ was selected for its large, mildly fragrant, abundant branched inflorescences that cover the plant in spring as well as its upright and relatively compact growth habit.

Like other woody ornamental plants released from the National Arboretum, ‘Cree’ and ‘Nantucket’ are not patented, so may be propagated and sold freely. Plants are available from wholesale, mail order, and retail nurseries. The National Arboretum does not have stock of these cultivars available for general distribution but can supply unrooted cuttings to nurseries wishing to propagate these plants. 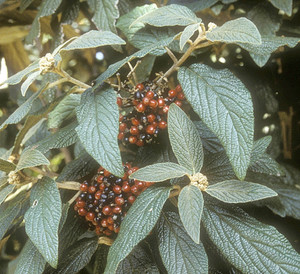 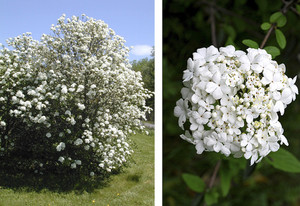