Effect of Plant Hormones and Distillation Water on Mints

In the process of extracting essential oil from aromatic plants through steam distillation, there is the production of waste distillation water, which is released into the environment (Lawrence, 2007; Topalov, 1989). The distillation water results from partial condensation of steam passing through the aromatic biomass. It is different from the hydrolat, the water eluted after separation of the essential oil, which is often reprocessed to recover traces of essential oil. Finding new uses for this waste product would benefit essential oil crop growers and processors as well as the environment. It was shown that the distillation wastewater of sage, thyme, and rosemary contained antioxidants and could be used as an ingredient in marinades for turkey meat to inhibit lipid oxidation and the development of rancid off-flavors (Mielnik et al., 2008). We hypothesized that residual distillation water could have an effect on peppermint (Mentha ×piperita L.) and spearmint (Mentha spicata L.) plants when used as a foliar spray.

Plant materials and growing conditions of the field experiment.

For the pot study we used certified virus-free material of ‘Native’ spearmint (Mentha spicata L.) and ‘Black Mitcham’ peppermint (Mentha ×piperita L.). Transplants (10 to 12 cm high with a couple of well-developed pairs of leaves) of both cultivars were obtained from the Summit Plant Laboratories, Inc. (Fort Collins, CO). Because of their hybrid nature, commercial varieties of spearmint and peppermint are propagated vegetatively (Lawrence, 2007; Tucker, 1992; Tucker and Fairbrothers, 1990). The container experiment was conducted in 3-gallon pots with 3.1 kg of commercial growth medium (Metromix 300; Sun Gro Horticulture, Bellevue, WA) in each pot. In every pot, two plants were transplanted and grown for 4 months until harvest. The experiment was conducted in a controlled-environment greenhouse (22 to 25 °C/18 to 20 °C day/night temperature regime) with an individual drip-tape irrigation system and emitter in every pot. Nutrient application to each pot was equivalent to a field application of ≈240 kg N/ha. The design was a 2 × 25 factorial with three replications, making the total number of treatment combinations 50. Within each of the two species, Treatments 1 to 9 were the three plant hormones at three concentrations [methyl jasmonate (MJ) at 10, 100, and 1000 mg·L−1; gibberellic acid (GA3) at 10, 100, and 1000 mg·L−1; and salicylic acid (SA) at 10, 100, and 1000 mg·L−1]; Treatments 10 to 24 were the residual distillation water (extracts) from 15 essential oil crops; and Treatment 25 was the water control. We selected MJ, GA3, and SA as representative plant growth regulators from a large group of plant hormones.

The spearmint and peppermint plants in the controlled environment pot experiment were treated twice with hormone solutions and extracts: at the beginning of bud formation and again at the beginning of flowering. Each pot received ≈10 mL of solution or extract as a foliar spray at each treatment. Both mint species were harvested 7 d after the second treatment, when plants were blooming. Fresh biomass yields were recorded. After plants were dried at a shady location, the air-dried yields were recorded.

Dry weight and essential oil weight and content response measurements were analyzed as two-factor factorial of species (Mentha ×piperita and M. spicata) and treatment (25 treatments). The analysis of variance was performed using the GLM Procedure of SAS (SAS Institute Inc., 2003), and further multiple means comparison was performed when the main effect or interaction with species effect of treatment was significant (P < 0.05) using the lsmeans statement of Proc GLM at α = 0.01 to protect against the overinflation of the Type I experimentwise error rate. For each response, the validity of model assumptions on the error terms was verified by examining the residuals as described in Montgomery (2009).

Statistical analysis indicated that the interaction effect of species and treatment was significant on oil content and oil yield, whereas only the main effects were significant on dry biomass yield (Table 1). With regard to biomass yield, the application of SA at 1000 mg·L−1 increased yields of both mints relative to the control, whereas the other treatments were not significantly different from the control (Table 2). However, SA at only 10 mg·L−1 gave the lowest biomass yield.

Analysis of variance P values for testing the main and interaction effects of species and treatment on dry weight, essential oil weight, and essential oil content.z 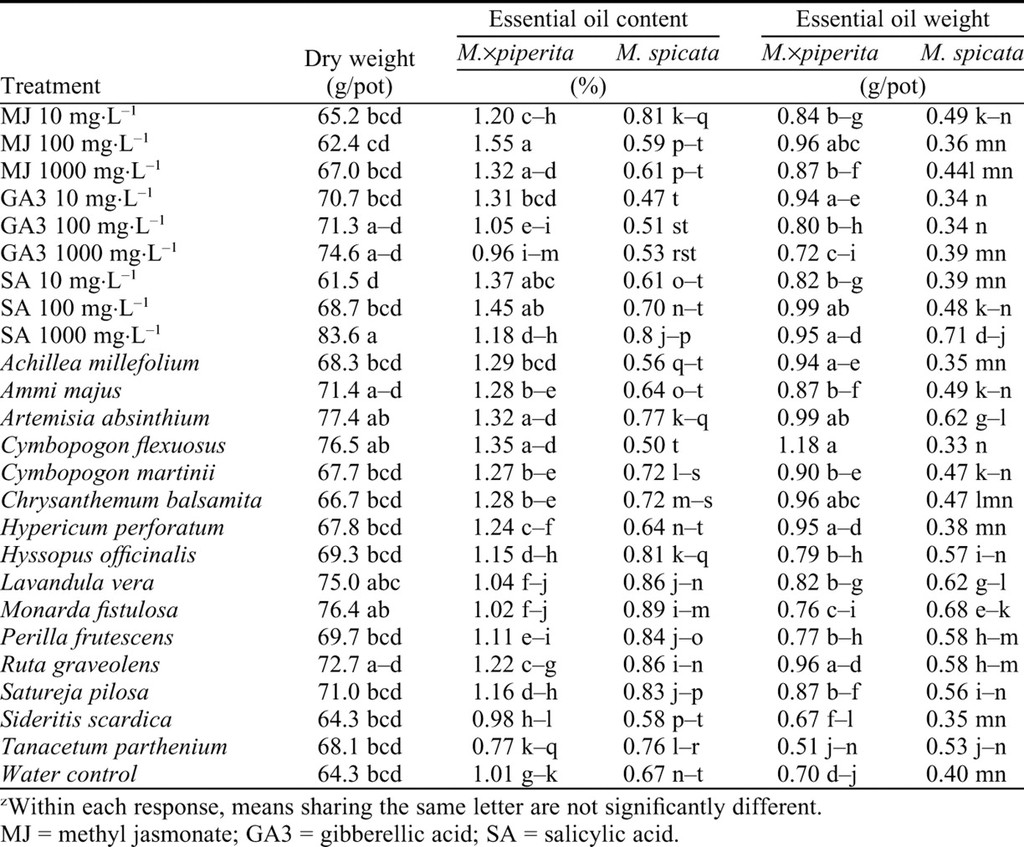 This study demonstrated that the residual distillation water of some aromatic plant species, a waste product from distillation that is currently released into rivers and streams, may have an effect on crop species and may be used as a tool for increasing essential oil content or essential oil yields of peppermint and spearmint crops. Further research is needed to elucidate the effect of these treatments on essential oil composition and to verify the effects under field conditions.