Decision-making in regard to scheduling transplanting date is one of the least studied aspects of sweetpotato production. It is well documented that transplanting dates can potentially influence storage root yield (Edmond and Ammerman, 1971). Recently, we have documented that up to 85% of adventitious roots extant at 5 to 7 d after transplanting (DAT) have the potential to become storage roots (Villordon et al., 2009b). The uniform and consistent initiation of adventitious roots has been shown to be a critical step in the determination of final yield (Kokubu, 1973; Togari, 1950; Villordon et al., 2009b). Thus, it is important to identify agrometeorological and management variables that exert influence on this specific stage (5 to 7 DAT) to optimize decision-making. In Louisiana, a calendar-based system is used for recommending transplanting dates, i.e., 15 Apr. to 30 June for south Louisiana and 1 May to 30 June for north Louisiana (Boudreaux, 2005). In North Carolina, the recommendations include a provision for soil temperature to be at least 18 °C at a depth of 10 cm for 4 consecutive days before transplanting (North Carolina Sweet Potato Commission, 2009). Some commercial growers in Louisiana are known to temporarily stop transplanting operations if there is a prevailing “northeast wind,” which is typically a cold, dry wind that predisposes transplants to desiccation (Cannon, personal communication). Precise information on the relative importance and interactions of agrometeorological variables on transplant establishment and subsequent storage root yield will potentially benefit researchers, growers, and crop consultants.

The objective of this study was to identify consensus variables at transplant time that were related to U.S. #1 yield outcome using least squares-based linear regression and machine learning approaches. Machine learning generally refers to the class of computational methods for deriving insightful knowledge (including heuristics, strategies, or structure) from data, observations, or past solutions (Shaw, 1993). Models derived from machine learning approaches are also referred to as adaptive models and are characterized by learning by example to solve problems. Adaptive modeling techniques are increasingly being used in areas where there is little or incomplete understanding of the problem to be solved but where training data are available (Park et al., 2005).

A recently concluded multistate research project has generated a database of storage root yield, soil analysis, chemical use, and agrometeorological data. A portion of this database was recently used in the development of a growing degree-day model (Villordon et al., 2009a). For this study, we used a subset of data consisting of yield data from replicated plots established on farms in Louisiana from 2004 to 2006 (n = 63). This data set was merged with location-specific agrometeorological data obtained from the Louisiana Agriclimatic Information Network (Louisiana Agriclimatic Information, 2009) and will be referred to as the modeling data set (MDS). The following stations were used: R & D Research Farm (Port Barre; long. 30°39′ N, lat. 91°59′ W), Sweet Potato Research Station (Chase; long. 32°5′ N, lat. 91°42′ W), and University of Louisiana at Monroe (Monroe; long. 32°30′ N, lat. 92°7′ W). Daily agrometeorological variables included maximum and minimum air temperature, maximum and minimum soil temperature (10.2-cm depth), solar radiation, relative humidity, wind (direction and speed), and rainfall. Means (total for rainfall) for all variables were calculated for 5 d before and after transplanting (DAT). Accumulated heat units, expressed as growing degree-days (base = 15.5 °C, ceiling = 32.2 °C), were used to adjust for differences in the length of growing periods (Riha et al., 1996). The model for calculating growing degree-days in Louisiana was previously described (Villordon et al., 2009a). A separate growing degree-day model was derived for transplants 5 DAT (base = 18.3 °C, ceiling = 32.2 °C). This was derived by calculating growing degree-days using various base and ceiling temperatures after 5 d and finding the best linear fit to U.S. #1 yield (t·ha−1). A similar approach was used to estimate soil heat units. Representations of air and soil temperature as air and soil heat units, respectively, have been routinely used in crop modeling (Pale et al., 2003; Riha et al., 1996). Descriptive statistics of agrometeorological variables used in subsequent modeling experiments are shown in Table 1.

Descriptive statistics of some agrometeorological variables 5 d after transplanting sweetpotatoes in Louisiana. 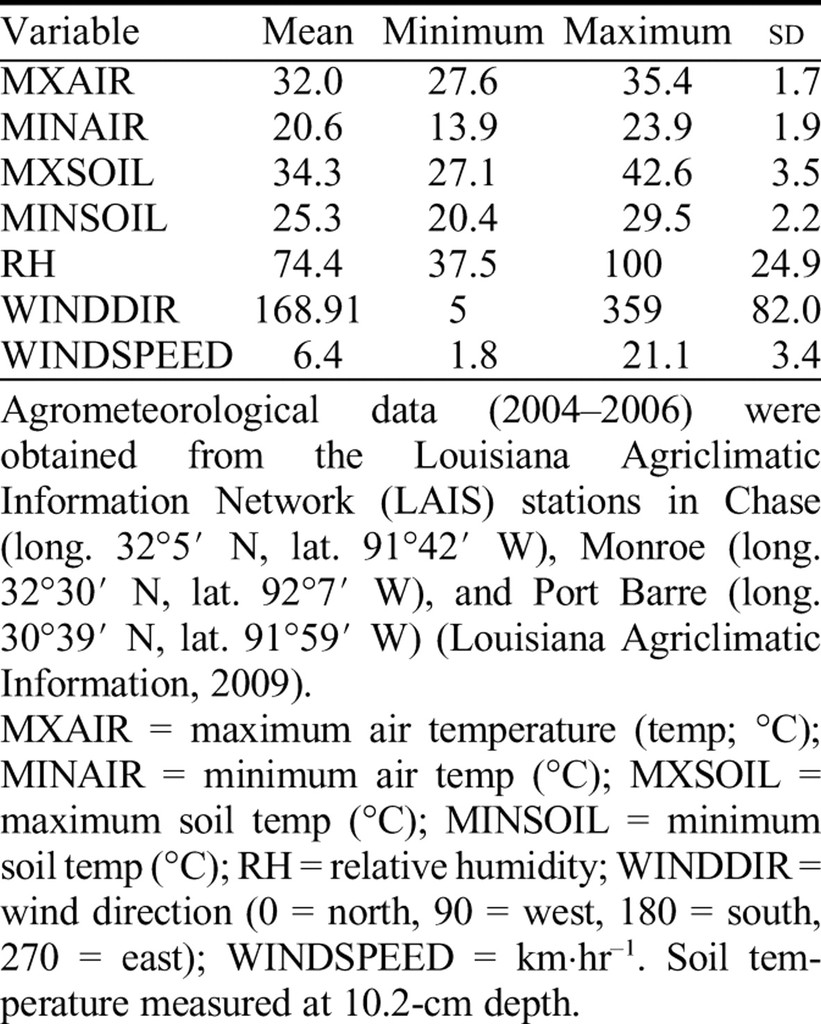 Predictive performance of machine learning models that represent relationship of some agrometeorological variables and sweetpotato U.S. #1 yield in Louisiana.

Based on these results, planning or decisions related to sweetpotato transplanting date should not be based solely on a range of calendar dates. Rather, such decisions should also consider the prevailing agrometeorological conditions. Such conditions can vary widely during the transplanting period in Louisiana (Table 1). A strict calendar-based system potentially ignores agrometeorological factors that can negatively influence transplant establishment and lead to inconsistent yields. Our results in part showed the importance of considering air and soil temperatures in determining optimum transplant conditions. Air temperature, expressed as accumulated heat units, was positively related to U.S. #1 yield based on the least squares-based linear regression model. This is consistent with cumulative research that showed air temperatures below 15 °C suppressed root development (Ravi and Indira, 2009). Low air temperatures (below 15 °C) have been recorded in the first 7 d in May in each of 2004 and 2005 for the Chase location (northeast Louisiana) (Louisiana Agriclimatic Information, 2009). The recommended sweetpotato transplanting dates for this region range from 1 May to 30 June (Boudreaux, 2005). On the other hand, the least squares-based linear regression model showed that minimum soil temperature (5 DAT) was negatively related to U.S. #1 yield. This observation is consistent with cumulative data indicating that soil temperatures between 20 and 30 °C favor storage root formation and growth with night temperatures (minimum) being the most critical (Ravi and Indira, 2009). Eguchi et al. (1994) have previously documented that storage root dry weight was greatest when root temperatures ranged from 24 to 26 °C; storage root dry weight decreased ≈25% and 50% at 28 and 30 °C, respectively. The observed minimum temperatures in the modeling data set varied from 20 to 29 °C (Table 1), underscoring the variability of temperature-related variables during sweetpotato transplanting in Louisiana. Our results also provide preliminary empirical evidence of the validity of growers' practice to temporarily stop transplant operations in recognition of wind-related variables. Growers have reported inconsistent yields associated with desiccated transplants brought about by “cold air blowing in from the northeast” (Cannon, personal communication). This is consistent with the recognition of wind-related variables in transplanting and establishment of vegetatively propagated crops. For example, Golden et al. (2003) mentioned that wind speeds greater than 16 km·h−1 accelerated leaf drying and hindered establishment in bare root strawberry transplants. In newly transplanted bare-root strawberry transplants, extensive overhead irrigation is practiced to prevent desiccation and death of transplants during the plant establishment period (Duval, 2002). Although there are no published reports that specifically examined the relationship between wind direction and speed on sweetpotato transplant survivability, we hypothesize that similar wind speeds and cold air (less than 15 °C) can lead to transplant desiccation that likely interferes with establishment. In this context, we define sweetpotato transplant establishment as the initiation of adventitious roots that can start as early as 3 DAT under field conditions (Villordon et al., 2009c). This period corresponds to Togari's (1950) Period I in the early “tuberous-root thickening stage,” defined as the appearance of protoxylem, a prerequisite stage to cambium development and subsequent storage root initiation. More recently, we have confirmed this phenological stage in ‘Beauregard’ (Villordon et al., 2009a, 2009c). Thus, the presumptive role of agrometeorological conditions 5 DAT appears related to transplant establishment and its direct relationship to the determination of potential yield in sweetpotatoes.

The availability of 10-d weather forecasts and other agrometeorological-related services allows growers, consultants, and knowledge workers to further optimize transplanting date decisions based on predicted U.S. #1 yield. For example, if a grower considers 11 t·ha−1 U.S. #1 yield as the breakeven point, then transplanting can be delayed until conditions are more conducive for higher yields. When properly stored, transplants can be held for as long as 5 d without affecting potential storage root yield (Hammett, 1985; Nakatani, 1987).

As a result of limitations of the data set, other variables such as soil moisture were not included in the analysis. This represents a significant limitation of the current study and likely contributed to the relative low coefficient of determination for the least squares-based linear regression model. This trend is also apparent in the relatively high sds associated with the RMSE estimates of the machine learning models, especially those associated with leave-one-out cross-validation (Table 1). Although leave-one-out cross-validation had the advantage of using as much data as possible for training, the variance of the estimated performance measurement was high because each test set contained only one record (Tan et al., 2005). Follow-up studies that quantify or document the mitigating influence of soil moisture on air and soil heat accumulation will likely improve the predictive abilities of models that focus on this growth period.

Statistical and machine learning approaches identified consensus variables 5 DAT that were related to marketable yield. This information can be used in conjunction with public or fee-based weather services that can provide agrometeorological forecasts of up to 10 d. This allows growers, working independently or with consultants, to further optimize decision-making related to transplanting. One of the important limitations of the current model is the lack of validation with soil moisture levels and other variables related to transplant establishment and early development. Follow-up studies that include soil moisture will likely enhance the accuracy of predictive models and further improve decision-making in sweetpotato transplanting.