Search for other papers by Cameron P. Peace in
ASHS
Google Scholar
PubMedClose

‘WA 2’ is an attractive bicolored apple with an outstanding texture, being very firm, crisp, and juicy. It loses very little firmness in storage compared with other cultivars. Fruit of ‘WA 2’ ripens in late September or early October in central Washington State. It is suited to the fresh market with the potential to be a commercial cultivar both directly off the tree and out of medium- and long-term storage.

‘WA 2’ originated from a seed collected in 1994 from open-pollinated fruit on a ‘Splendour’ tree. ‘Gala’ trees surrounded the ‘Splendour’ tree and subsequent DNA testing has confirmed it was the pollen source (Table 1). The seed germinated in 1995 and the seedling was raised in a greenhouse at the Washington State University (WSU) Tree Fruit Research and Extension Center (TFREC), Wenatchee. The seedling was transferred to the nursery in May 1995 where it grew until Sept. 1995 when it was budded onto the M.9 rootstock. The bud grew into a tree in 1996 and was planted in the Phase 1 seedling evaluation orchard T19 at TFREC (row 17, position 3) in Apr. 1997. The seedling tree produced fruit in 2000 and 2001 and was selected for Phase 2 evaluation in Oct. 2001 based on its fruit quality. Buds were taken from the seedling tree and propagated on M.9 rootstock in Sept. 2002. Fifteen trees were produced for Phase 2 trials and planted at three central Washington locations (five trees per site) in Apr. 2004. Phase 3 orchard trials with larger tree numbers on M.9 rootstock were planted in Spring 2007 at four commercial orchard sites in central Washington. Virus-indexed material was budded on MM.106 (virus-indexed) for the production of certified propagation material.

Fruit of ‘WA 2’ ripens in late September or early October in Wenatchee, several weeks after ‘Gala’ and usually earlier than ‘Braeburn’ and ‘Fuji’. Fruit shape is round conic and size is medium, averaging 7.7 cm in equatorial diameter. Skin color ranges from orange–red to pinkish red (RHS 47A) blush (not stripe) over a yellow background, RHS 4C. It is a bicolored apple with 70% to 90% of the skin surface red. Lenticels are usually large (0.3 to 0.7 mm in diameter) and very conspicuous, RHS 157D, a distinguishing characteristic, and stem basin russet and scarf skin can occur. These skin conditions do not detract from its overall pleasing appearance (Fig. 1) or eating quality. Stem length is medium, reaching above the stem cavity, which is acuminate. The calyx is generally erect with some light ribbing around the basin cavity. Seeds average three per cell, are acute in shape, averaging 4.5 mm diameter by 8.1 mm in length, and are RHS 200D brown.

Fruit of the original tree from 2001 to 2008 and from Phase 2 trees in 2005, 2006, 2007, and 2008 were evaluated each year at several harvest dates. Fruit maturity, eating quality, and appearance were evaluated subjectively at harvest and also after 60 d in regular atmosphere storage (1 to 2 °C). Fresh and stored fruit were also evaluated objectively for firmness, soluble solids, acidity, and mean weight (see Table 2 for stored values from 2009). Aroma is mild, apple-like, and fruit flesh is firm, crisp and melting, mildly acid with excellent sugar balance and yellow–white (RHS 158D) in color. An untrained panel of 80 consumers evaluated fruit of ‘WA 2’ and ‘Fuji Autumn Rose’ with several other WSU selections after 2 months in regular (not controlled atmosphere) cold storage using a 7-point hedonic scale (1 = dislike extremely and 7 = like extremely) conducted by Dr. Carolyn Ross, WSU Pullman. No significant difference (P < 0.05) was found between ‘WA 2’ and ‘Fuji’ for juiciness, sweetness, astringency, or overall acceptance; however, ‘WA 2’ was rated statistically higher than ‘Fuji’ for firmness, crispness, and lack of mealiness (data not shown).

‘WA 2’ trees are of moderate vigor and spur type with spur length ranging from 1 to 8 cm. Overall tree shape is upright and spreading. ‘WA 2’ is very productive and can exhibit alternate bearing tendencies if over cropped the previous season. Annual yield from 2005 to 2009, cumulative yield, and yield efficiency of ‘WA 2’, ‘Gala’, and ‘Fuji’ are shown in Table 3 from trees planted in 2004 near Richland, central Washington. Trunk bark is smooth and colored grayed orange (RHS 177A) with numerous lenticels of RHS 200C brown. Branches are spreading with a crotch angle of 0° to 35°, colored grayed purple RHS 187A with lenticels and moderate white pubescence. Internode spacing averages 4.2 cm. Branch color is gray–brown (RHS N199D) with numerous white lenticels (RHS N155C), rough, and averaging 10.2 mm × 2.1 mm. Leaves are oval, leathery with a glossy upper surface and a lower surface covered with fine pubescence. Leaf length ranges from 7.2 to 10.5 cm and width ranges from 4.6 to 7.3 cm. The margin is considered double serrate with the tip cuspidate and the base obtuse. Stipules are present on most leaves.

Annual production, cumulative yield, and yield efficiency of ‘WA 2’ trees compared with ‘Gala’ and ‘Fuji’ from a 2004 planting near Richland in central Washington.

Nine genetic loci were screened on ‘WA 2’, ‘Splendour’, ‘Gala’, and 60 other genotypes representing the pool of parents used in the Washington apple breeding program during the 1990s. The loci screened consisted of five gene-based markers (“Md-” prefix) and four simple sequence repeats (SSRs). Primers, polymerase chain reaction (PCR) conditions, and allele sizing/scoring followed Zhu and Barritt (2008) for Md-ACS1 and Md-ACO1, Costa et al. (2008) for Md-Exp7, Mann et al. (2008) for Md-Exp2, and Patocchi et al. (2009) for the SSRs. Primers (forward: CGGGATCAGACTACAAGATGTG; reverse: AGGCTCTAAGGAAGCCCAATAG) were developed by Bassil et al. (2005; labeled as PYC-001 in that paper) for the Md-PG2 gene of Wakasa et al. (2006) and PCR conditions were as described by Bassil et al. (2005). Amplified fragments for all markers were separated on large polyacrylamide gels and silver-stained as described by Peace et al. (2005). Alleles were scored for ‘WA 2’, ‘Splendour’, and each of the other 60 potential parents of ‘WA 2’. Observed allele frequencies within the parent pool were calculated for each locus.

‘Splendour’ was verified as the (maternal) parent of ‘WA 2’ because it possessed at least one of the alleles of ‘WA 2’ for every locus examined (Table 1). ‘Gala’ was deduced as the pollen parent of ‘WA 2’ because it was the only individual in the parent pool to possess all of the remaining alleles of ‘WA 2’ not already accounted for by ‘Splendour’ (Table 1). The probability of another cultivar beyond the parent pool being a potential pollen parent of ‘WA 2’ was determined to be between one in 2,579 and one in 12,740. The most conservative probability (one in 2579) was based on the assumption that, for loci in which ‘WA 2’ and ‘Splendour’ shared the same genotype and therefore the allele inherited by ‘WA 2’ was ambiguous, the remaining allele was the most common one.

For the 1-aminocyclopropane-1-carboxylic acid synthase 1 (Md-ACS1) ethylene production gene, ‘WA 2’, similar to both its parents, is homozygous for the “2” allele of Md-ACS1 (i.e., Md-ACS1-2:2), which confers low ethylene production and therefore excellent fruit firmness and storability (Zhu and Barritt, 2008). For a second ethylene gene, 1-aminocyclopropane-1-carboxylic acid oxidase 1 (Md-ACO1), which has a less significant role in ethylene production, ‘WA 2’ is homozygous Md-ACO1-2:2. Md-ACS1 and Md-ACO1 genotypic data were determined in cooperation with Dr. Yanmin Zhu, USDA Wenatchee.

Washington State growers can apply to participate in Phase 4 evaluation of ‘WA 2’ until 31 January 2015. Participating growers can apply for commercialization licenses for ‘WA 2’ from 31 January 2011. Further information and application forms are available at the Washington Tree Fruit Research Commission web site (http://www.treefruitresearch.com) or from Kate Evans. 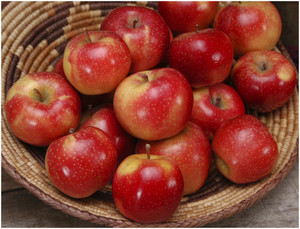