‘Newberry’ is a new trailing blackberry (Rubus subg. Rubus Watson) cultivar from the U.S. Department of Agriculture–Agricultural Research Service (USDA-ARS) breeding program in Corvallis, OR, released in cooperation with the Oregon State University's Agricultural Experiment Station. ‘Newberry’ is a vigorous plant that produces very high yields of high-quality fruit with an appearance and color that is similar to ‘Boysen’ (“boysenberry”) (Figs. 1 and 2). While selected as a mechanically harvestable berry for the processing market, the fruit has proven to be of particular value as a niche fresh market blackberry where its unique color, appearance, and tendency not to “bleed” set it apart from other blackberries. The ‘Newberry’ name was chosen for two reasons: 1) the berry has been informally sold as “New Berry” in California farmers markets for a few years; and 2) to recognize its roots, because Newberry Crater/Caldera and Volcano are prominent geological features and park areas in central Oregon.

‘Newberry’, tested as ORUS 1324-1, was selected in Corvallis, OR, in 1994 from a cross made in 1992 of ORUS 834-5 and ORUS 1045-14 (Figs. 3 and 4). ORUS 834-5 has a fairly typical trailing blackberry background with ‘Marion’, ‘Boysen’, ‘Logan’, ‘Eldorado’, and Rubus ursinus Cham et Schltdl. selections ‘Jenner’ and ‘Zielinski’ in the pedigree. The background and pedigree of the paternal parent, ORUS 1045-14, is interesting and complex. One grandparent of ‘Newberry’ is ‘Austin Thornless’ and the other, ORUS 880-1, is a purple-fruited, open-pollinated selection of US 1576 in Beltsville, MD. US 1576 traces back through two generations of open pollination to a hybrid between tetraploid red raspberry M28 from the Scottish Crop Research Institute (Invergowrie, U.K.) and a tetraploid blackberry that appears to be what we would call semierect. The significant amount of red raspberry in the background of ‘Newberry’ through ‘Logan’, ‘Boysen’, and SCRI 75158B1 helps explain ‘Newberry's’ color and appearance. ‘Newberry’ was originally selected for its large fruit size, very good flavor, vigor, productivity, and freedom from disease. While thoroughly tested in the late 1990s in research and grower trials, the thorny canes and fruit that is not black enough for most processed markets were considered undesirable by most commercial blackberry growers. However, some growers found that its unique color set it apart in local fresh market sales. In addition, although fruit resemble that of ‘Boysen’, it is firmer with less “bleeding” when handled and packed. As a result, a small commercial acreage has gradually been established.

‘Newberry’ has been evaluated most extensively in trials at Oregon State University's North Willamette Research and Extension Center (Aurora, OR; OSU-NWREC), USDA-ARS in Corvallis, OR, Enfield Farms Inc. (Lynden, WA), and in commercial grower fields in California's Central Valley (e.g., Kearny, CA). In each of the Oregon trial plantings, standard cultural practices for trailing blackberry production were used, including annual pre- and postemergent herbicide applications, spring nitrogen fertilization (78 kg N/ha), postharvest removal of floricanes, training of primocanes to a two-wire trellis, and weekly overhead application of 2.5 to 5.0 cm of irrigation during the growing season, depending on rainfall. Dormant applications of liquid lime sulfur and copper hydroxide were made to control leaf and cane spot (Septoria rubi Westend), purple blotch [Septocyta ruborum (Lib) Petr.], rust [Kuehneola uredinis (Link) Arth.], and anthracnose [Elsinoe veneta (Burkholder) Jenk.]. They also received a single bloom-time application of captan to control anthracnose, botrytis (Botrytis cinerea Pers.:Fr.), cane spot, purple blotch, and stamen blight [Hapalosphaeria deformans (Syd.) Syd.] at labeled rates. The cooperating grower in Washington is primarily a red raspberry grower and although plants were spaced and trained similarly to those in the Oregon trials, they were irrigated and received nitrogen fertilizer rates that were standard for red raspberry but greater than that typical for blackberry. At OSU-NWREC, ‘Newberry’ was planted in 1996 along with other selections and ‘Douglass’, ‘Kotata’, ‘Marion’, and ‘Waldo’ in a randomized complete block design with four three-plant replications used for fresh fruit characteristics and three replications harvested once a week to determine harvest season, yield, and average fruit weight (based on a randomly selected subsample from each harvest) (Douglass, 1994; Lawrence, 1984; 1989; Waldo, 1957). A weighted mean fruit weight was calculated. These data, collected from 1998 to 2000, were analyzed as a split plot in time with cultivar as the main plot and year as the subplot with mean separation by least significant difference. Of the 12 genotypes harvested from this replicated trial, only the data from ‘Newberry’ and the named cultivars were included in the analysis. The cultivar × year interaction was significant for yield and for fruit weight and the interaction means for yield are presented and compared (Table 1). The fruit ripening season in Oregon was characterized by the dates on which 5%, 50%, and 95% of the total fruit were harvested (Table 1). Subjective fruit evaluations were made during the 1997 to 1999 fruiting seasons using a 1 to 9 scale (9 = the best expression of each trait). The fruit ratings included sterility (subjective rating of drupelet set), firmness (as measured subjectively by hand in the field on six to eight fruit), color (ideal is a solid, dark black), shape (with a uniform, long conic berry being ideal), texture (as measured subjectively when chewed while tasting berries in the field), separation (subjective rating of how easily the ripe fruit were separated from the plant), and flavor (subjectively rated by tasting fruit in the field) (Table 2). Plant ratings were conducted one time each year during the fruiting season for primocane and floricane vigor, spines (9 = spineless; 1 = numerous, large spines), flowering or fruiting lateral length (1 = very short; 5 = very long) and strength (1 = weak; droopy; 5 = stiff, sturdy), and damage resulting from leaf spot and winter injury (9 = no injury; 1 = dead or completely defoliated) (Table 3). In 2002, ‘Newberry’ was planted along with a number of other genotypes in plots at Enfield Farms (Lynden, WA) to assess cold-hardiness and suitability for machine harvest. While observations were made on these plants from 2003 to 2005, the winters were relatively mild (minimum temperature –6.0 in Nov. 2003). In 2003 and 2004, fruit at Enfield Farms were harvested from five-plant plots by an over-the-row Littau Harvester (Stayton, OR) with a horizontal (Christy) head.

‘Newberry’ consistently produced fruit that were larger than all other cultivars in the trial: 35% larger than ‘Marion’ (Table 1). ‘Newberry’ has good drupelet set with very little sterility, comparable to most other cultivars in the trial but better than ‘Douglass’ (Table 2). The fruit were scored as being firmer than ‘Marion’ but similar to the other cultivars (Table 2). Fruit evaluated for firmness in this trial were picked at the full ripe stage when they were beginning to soften substantially. However, growers picking for the fresh market will harvest blackberries not yet fully ripe but fully colored to improve firmness. In commercial evaluation, when ‘Newberry’ was picked for local, fresh market sales and compared with the similar-appearing ‘Boysen’, it was subjectively noted for being firm and for not “bleeding” as extensively as ‘Boysen’ is prone to do. ‘Newberry's’ fruit color is too purple for it to be considered an ideal blackberry, but its fruit color is comparable to ‘Boysen’ (Table 2) (Hall et al., 2002). The ideal blackberry shape is a long, uniform conic, as in ‘Waldo’ (Clark et al., 2007; Finn, 2008). ‘Boysen’ fruit tend to be rounder, blockier, and more irregular than is ideal for blackberry. ‘Newberry’ fruit shape is more similar to ‘Boysen’ than the preferable conic blackberry. The ideal blackberry has seeds that are not very noticeable on the palate (Clark et al., 2007; Finn, 2008). Although ‘Newberry’ had more noticeable seeds than the other cultivars in the trial, they are considered acceptable (Table 2) and similar to ‘Boysen’ (data not shown). Throughout evaluation, ‘Newberry’ was scored as having an excellent flavor. Although it scored similarly to ‘Marion’ and ‘Douglass’ for flavor, ‘Newberry’ does not have the same aromatic flavor as these two cultivars (Du et al., 2009). The flavor is full with a good sugar and acid balance. Despite ‘Newberry's’ appearance, it does not taste like ‘Boysen’. Yorgey and McGorrin (2001) evaluated ‘Newberry’ along with several other cultivars for soluble solids, pH, and titratable acidity. ‘Newberry’ fruit had soluble solids levels similar to ‘Black Diamond’ and lower than ‘Marion’; fruit pH was comparable to ‘Black Diamond’ and higher than ‘Marion’; and titratable acidity was lower than ‘Marion’ or ‘Black Diamond’.

‘Newberry’ is among the most vigorous blackberries ever released by our program. The primocanes grow vigorously the first year and although some genotypes (i.e., ‘Kotata’ and ‘Douglass’) have a substantial decline in vigor when the floricanes are evaluated the next year, ‘Newberry’ has outstanding floricane vigor comparable to ‘Marion’ and ‘Waldo’ (Table 3). This overall plant vigor is also reflected in its tolerance of septoria leaf spot and its lack of winter injury (Table 3). We have seen no winter injury on ‘Newberry’ in any of our Oregon or Washington plantings. ‘Newberry’ plants are thorny—intermediate between the very thorny ‘Kotata’ and the moderately thorny ‘Marion’. The flowering/fruiting laterals are as long as those of ‘Marion’ but tend to be weaker and bend downward. The combination of extreme vigor and downward-hanging flowering laterals could lead to several layers of fruiting laterals reducing air circulation and creating potential disease and machine harvest problems.

‘Newberry’ is introduced as a vigorous and high-yielding cultivar with excellent quality, large, deep purple fruit that appear to be best suited for local fresh market sales where this appearance combined with minimal “bleeding” is desired. ‘Newberry’ fruit machine-harvest well for processing. Its intermediate niche in fruit quality between ‘Boysen’ and typical blackberries, its thorny canes, and its tendency to have weak, layering laterals will mean that growers will want to really understand their market before they plant ‘Newberry’ for machine harvest for processing. This said, fairly large plantings of ‘Newberry’ have been established that will be mechanically harvested.

‘Newberry’ is not patented. However, when this germplasm contributes to the development of a new cultivar, hybrid, or germplasm, it is requested that appropriate recognition be given to the source. Further information or a list of nurseries propagating ‘Newberry’ is available on written request to Chad Finn, USDA-ARS, Northwest Center for Small Fruit Research, Horticultural Crops Research Laboratory, 3420 NW Orchard Avenue, Corvallis, OR 97330. The USDA-ARS does not sell plants. In addition, genetic material of this release has been deposited in the National Plant Germplasm System as PI 658340 (CRUB 2547), where it will be available for research purposes, including development and commercialization of new cultivars.

Ripe fruit on plants of ‘Newberry’. 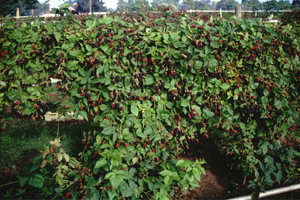 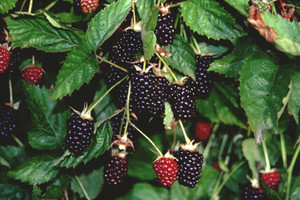 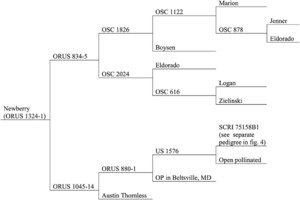 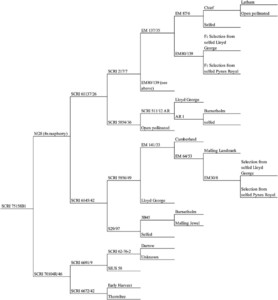