‘Wild Treasure’ is a new trailing blackberry (Rubus subg. Rubus Watson) cultivar from the U.S. Department of Agriculture–Agricultural Research Service (USDA-ARS) breeding program in Corvallis, OR, released in cooperation with Oregon State University's Agricultural Experiment Station. ‘Wild Treasure’ is thornless and has high-quality fruit that are very small and suitable for mechanical harvest (Figs. 1–3). The fruit is of particular value for market niches where small fruit size is perceived as superior. Such markets include bakery products that use whole berries and in frozen polybag fruit blends in which large-fruited blackberries are out of proportion to the other components of the mix. ‘Wild Treasure’ is named to recognize its pedigree because it was selected from a cross between a thornless cultivar and a selection of the western dewberry, Rubus ursinus Cham. et Schlt.

In 1993 and 1994, an extensive collection of Rubus ursinus germplasm was made throughout Oregon and Washington. The Washington portion of this trip was organized by James Luby (Univ. of Minnesota, St. Paul, MN) and Richard Harrison (Driscoll Strawberry Associates, Watsonville, CA). Numerous seedling and clonal populations were planted in a common garden in Corvallis for evaluation and a number of selections were made from these populations (Finn, 2001). Rubus ursinus offers several traits of particular interest to breeders, including outstanding flavor and fruit quality, very early ripening, flexible canes, and good vigor. Many of the characteristics that have made ‘Marion’ blackberry the commercial standard for fruit processing, including aromatic flavor and less noticeable seeds, can be traced back to R. ursinus in its pedigree (Yorgey and Finn, 2005). However, R. ursinus in a monoculture in the Willamette Valley (Oregon) is very susceptible to foliar and cane diseases, particularly anthracnose [Elsinoe veneta (Burkholder) Jenk.] and septoria (Septoria rubi Westend). This and its dioecious nature make it difficult to commercialize this species.

‘Wild Treasure’, tested as ORUS 1843-3, was selected in Corvallis, OR, in 1998 from a cross made in 1996 of GP 9-24 and ‘Waldo’. GP 9-24 is a selection made from a seedling population of R. ursinus that was collected as fruit from Mount Hebo (Oregon) in the Siuslaw National Forest at an elevation of 961 m. GP 9-24 was originally selected for its larger fruit size relative to other R. ursinus genotypes, low foliar disease incidence, and high fruit number per lateral. ‘Waldo’ is a very high-quality thornless blackberry that has excellent foliar disease resistance, medium–large fruit, high yield, and short internodes that result in a somewhat dwarfed plant with brittle canes (Lawrence, 1989). Selections from this cross had the superior fruit quality and vigorous growth of R. ursinus combined with the good disease tolerance and thornlessness of ‘Waldo’.

‘Wild Treasure’ has been most extensively evaluated in trials at Oregon State University's North Willamette Research and Extension Center (Aurora, OR; OSU-NWREC), the USDA-ARS in Corvallis, OR as well as at a commercial grower site, Enfield Farms Inc. (Lynden, WA). In each of the Oregon trial plantings, standard cultural practices for trailing blackberry production were used, including annual pre- and postemergent herbicide applications, spring nitrogen fertilization (78 kg N/ha), postharvest removal of floricanes, training of primocanes to a two-wire trellis, and weekly overhead application of 2.5 to 5.0 cm of irrigation, depending on rainfall. Dormant applications of liquid lime sulfur and copper hydroxide were made to control leaf and cane spot (Septoria rubi), purple blotch [Septocyta ruborum (Lib) Petr.], rust [Kuehneola uredinis (Link) Arth.], and anthracnose. They also received a single bloom time application of captan at labeled rates to control anthracnose, botrytis (Botrytis cinerea Pers.:Fr.), cane spot, purple blotch, and stamen blight [Hapalosphaeria deformans (Syd.) Syd.]. The cooperating grower in Washington is primarily a red raspberry (Rubus idaeus L.) grower. Although the plants were spaced and trained similarly to the Oregon trials, they were irrigated and fertilized with nitrogen at rates standard for red raspberry but greater than typical for blackberry. At OSU-NWREC, ‘Wild Treasure’ was planted in 2001, along with standard cultivars, in a randomized complete block design with four three-plant replications used for fresh fruit evaluation and three replications harvested once a week to determine harvest season, yield, and fruit weight (mean of randomly selected 25-berry subsamples per harvest). A mean weighted fruit weight was calculated. These data, collected in 2003–2005, were analyzed as a split plot in time with cultivar as the main plot and year as the subplot. Of the 20 genotypes harvested from the replicated trial, only the data for ‘Marion’, ‘Siskiyou’, ‘Waldo’, and ‘Wild Treasure’ were included in the analysis. The cultivar × year interaction was significant for yield and for fruit weight. Therefore, the interaction means for yield are presented and compared using least significant difference multiple range test (Table 1). The fruit ripening season in Oregon was characterized by the dates on which 5%, 50%, and 95% of the total fruit were harvested (data not shown). Subjective fruit evaluations were made during the fruiting season using a 1 to 9 scale (9 = the best expression of each trait). These subjective evaluations were done on cultivars in the replicated trial as well as important cultivars that were not in the trial (e.g., ‘Black Diamond’, ‘Chester Thornless’, and ‘Obsidian’). The fruit ratings included firmness (as measured subjectively by hand in the field on six to eight fruit), color (deep full black is ideal), shape (with a uniform, long conic ideal), texture (as measured subjectively when chewed while tasting fruit in the field), separation (subjective rating of how easily the ripe fruit were separated from the plant), and flavor (subjectively rated by tasting fruit in the field) (Table 2). Plant ratings were conducted one time each year from 2001 to 2004 during the fruiting season for primocane and floricane vigor, spines (9 = spineless, 1 = large numerous thorns), and flowering or fruiting lateral length (1 = very short, 5 = very long) and strength (1 = weak, droopy; 5 = stiff, sturdy). In 2002, ‘Wild Treasure’ was planted with a number of genotypes in plots at Enfield Farms (Lynden, WA) along the Canada–U.S. border to assess cold-hardiness and suitability for machine harvest. While observations were made on these plants from 2003 to 2005, the winters were relatively mild (minimum temperature –6.0 °C in Nov. 2003). In 2003 and 2004, fruit were harvested from five-plant plots by an over-the-row Littau (Stayton, OR) harvester with a horizontal (Christy) head. In separate studies, the chemical and sensory characteristics of commercial blackberry cultivars and advanced selections, including ‘Wild Treasure’, were evaluated (Siriwoharn et al., 2004; Yorgey and Finn, 2005).

Subjectively evaluated fruit quality traits for four blackberry cultivars in the same replicated trial and for seven other cultivars being evaluated in unreplicated plots in the same years (2001–2003) at Oregon State University's North Willamette Research and Extension Center (Aurora, OR).z

‘Wild Treasure’ produced yields lower than ‘Waldo’ and ‘Marion’ in all harvest seasons and in two of three harvest seasons when compared with ‘Siskiyou’ (Table 1). The low yield was attributable in large part to factors that growers can control when planting ‘Wild Treasure’ in solid blocks. ‘Wild Treasure’ grows more vigorously, on smaller-diameter canes, with primocanes entering a rapid elongation stage earlier in the season than ‘Marion’ or ‘Black Diamond’. As a result of this growth habit, this cultivar is prone to substantial cane breakage if it is trained in the late summer as growers would do for other commercial cultivars. Cane breakage typically occurs when the primocanes are lifted onto the trellis system during training, leading to lost fruiting canes, greater winter injury, and reduced yields. ‘Wild Treasure’ should either be trained gently very soon after harvest in late July or it should he “trained as it grows” in an alternate year production system. Yield was comparable to that of ‘Marion’ in the first harvest season when picked by machine at Enfield Farms (data not shown). ‘Wild Treasure’ was not significantly different from ‘Marion’ or ‘Waldo’ for the ease of separation of the fruit from the plant. This observation agrees with the experience at Enfield Farms where ‘Wild Treasure’ was machine-harvestable.

‘Wild Treasure’ plants are thornless and as vigorous as ‘Marion’ (data not shown). Genotypes whose spinelessness is derived from ‘Austin Thornless’ often have spines on the new canes until they are ≈0.5 m long and this is true for ‘Wild Treasure’. As a result, even if there are a few thorns at the base of the canes, the plants are considered “thornless” from a commercial standpoint. Canes of ‘Wild Treasure’ have fruiting laterals that are short, like ‘Black Diamond’, and similar in strength to those of ‘Marion’ and ‘Black Diamond’. The canes are as resistant to cane and leaf spot as are ‘Marion’ canes. No serious winter injury has been noted on this genotype since it was selected, even in northern Washington. However, the winters were relatively mild during the evaluation period.

The harvest season for ‘Wild Treasure’ begins and ends slightly before ‘Marion’ but peaks at the same time (data not shown).

A panel of industry representatives, in a blind evaluation, ranked ‘Wild Treasure’ (evaluated as ORUS 1843-3) puree numerically higher but not significantly different from ‘Marion’ for aroma, flavor, color, and overall quality (Yorgey and Finn, 2005). A similar evaluation as an individually quick frozen (IQF) product, ‘Wild Treasure’ was generally ranked poorer than ‘Marion’, which we attribute to a negative bias by the panelists against very small fruit. When frozen and thawed as an IQF fruit, ‘Wild Treasure’ is intermediate as far as turning purple after freezing and thawing between ‘Obsidian’, which tends to stay black, and ‘Marion’, which tends to turn purple. In a blind evaluation by a trained consumer panel, flavor was compared with “fresh fruits,” “citrus,” “strawberry,” and “raspberry” (Kurnianta, 2005). In an evaluation of fruit chemistry, including anthocyanins, polyphenolics, and antioxidant properties, ‘Wild Treasure’ (evaluated as ORUS 1843-3) had a lower percent soluble solids, higher titratable acidity, lower total phenolics, similar total anthocyanins, and slightly lower antioxidant potential as measured by oxygen radical absorbance capacity and ferric reducing antioxidant power than ‘Marion’ (Siriwoharn et al., 2004). ‘Wild Treasure’ had much higher procyanidin and ellagic acid but comparable ellagitannin and flavonol levels to ‘Marion’ (Siriwoharn et al., 2004).

‘Wild Treasure’ is not likely to be well suited to fresh market because it is not sufficiently firm for handling and shipping significant distances. Its small fruit size may preclude economical hand-harvesting, although when sold at a premium in farmers' markets, it may be profitable.

‘Wild Treasure’ is introduced as a very high-quality, very small-fruited blackberry that can be mechanically harvested for the processing market. ‘Wild Treasure’ has generated a great deal of commercial interest for specialty small fruit applications and is recommended for areas where trailing blackberries can be successfully grown.

‘Wild Treasure’ is not patented. However, when this germplasm contributes to the development of a new cultivar or germplasm, it is requested that appropriate recognition be given to the source. Further information or a list of nurseries propagating ‘Wild Treasure’ is available on written request to Chad Finn, USDA-ARS, Northwest Center for Small Fruit Research, Horticultural Crops Research Laboratory, 3420 NW Orchard Avenue, Corvallis, OR 97330. The USDA-ARS does not sell plants. In addition, genetic material of this release has been deposited in the National Plant Germplasm System as PI 638265 (CRUB 2237), where it will be available for research purposes, including development and commercialization of new cultivars.

Harvested flat of ‘Wild Treasure’ fruit with a single hallock of ‘Marion’ for comparison. 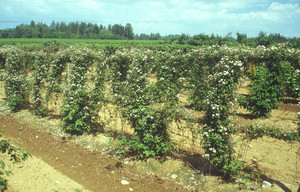 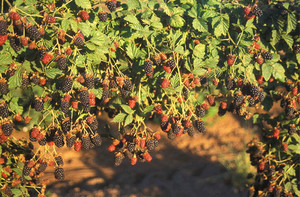 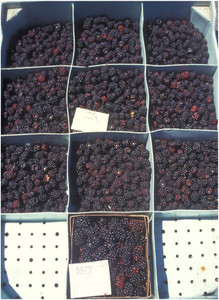