The American elderberry {Sambucus canadensis L. [syn. Sambucus nigra ssp. canadensis (L.) R. Bolli]} is an emerging fruit crop of increasing commercial interest for jelly, juice, wine, colorant, and nutraceutical use in North America (Charlebois et al., 2010). In past years, elderberries were largely harvested from the wild, and only minor efforts were made to select or develop improved cultivars (ASHS Press, 1997). More recently, increased interest and emerging markets have spurred the need for improved elderberry cultivars with consistent, superior production. The Elderberry Improvement Project was initiated at Missouri State University and the University of Missouri in 1997 with the goal of developing American elderberry cultivars adapted to Midwestern environments (Byers et al., 2009). ‘Wyldewood’ (Fig. 1), the first cultivar released from the program, is a tall, vigorous plant that consistently produces heavy yields, is efficient to harvest, and produces fruit with characteristics that are well-suited for processing.

‘Wyldewood’, originally described and tested as ‘Brush Hills 1’ (Thomas and Byers, 2000) and ‘Wyldewood 1’ (Finn et al., 2008), was identified and collected from the wild by Jack Millican in 1995 near the community of Brush Hill in east–central Oklahoma (long. 35.419° N, lat. 95.622° W, alt. 189 m). ‘Wyldewood’ cuttings were provided to the Elderberry Improvement Project in 1998 by Margaret Millican. ‘Wyldewood’ is named in honor of Wyldewood Cellars Winery of Mulvane, KS, a leading promoter of elderberry production in the Midwest and a supporter of the Elderberry Improvement Project.

‘Wyldewood’ has been under observation and testing since 1998 at two locations in Missouri: the Missouri State University State Fruit Experiment Station at Mountain Grove and the University of Missouri Southwest Research Center at Mount Vernon. Both of these sites are in southern Missouri (USDA hardiness zone 6), ≈140 km apart, with relatively similar climate and soil conditions. Initial testing took place in observation plots at the two Missouri sites. Replicated evaluation of ‘Wyldewood’ and 11 other genotypes, including the standard cultivar Adams II, occurred at both sites from 2004 to 2006 (Finn et al., 2008). Consistent superior performance prompted the release of this cultivar. ‘Wyldewood’ is a tall shrub reaching 2.2 m with a spreading to upright growth habit. ‘Wyldewood’ blooms in June in Missouri, and the florets are easily removed from the cyme for use as a dried product or as a flavoring.

The harvest season for ‘Wyldewood’ is generally 14 to 26 d later than ‘Adams II’. Harvest usually begins in late July in Missouri. Plants that are pruned to the ground in spring produce primary shoots that ripen fruit over a 3-week period, allowing for the harvest of the majority of the fruit in three harvests at 7-d intervals. Unpruned plants ripen fruit over a 4-week period (Thomas et al., 2009). The fruit cymes of ‘Wyldewood’ are presented in an upright position at ripening. The cymes at harvest are medium to large compared with ‘Adams II’, somewhat loose, with an average weight of 33.6 g on unpruned plants and 83.1 g on plants that are pruned to the ground in spring. Secondary cymes often form from the axils below the main cymes, a characteristic that increases bearing potential of each shoot. Berries are dark purple, ripen uniformly in the cymes, and are resistant to shattering. Berry weight ranges from 52 to 111 mg (Finn et al., 2008). Yield variability was noted between the Mountain Grove and Mount Vernon sites with Mountain Grove plots producing higher yields but smaller berries than the Mount Vernon plots. This yield difference is difficult to explain, because growing conditions were generally similar at both sites. The Mountain Grove plots, however, were established on raised soil ridges very near a large irrigation lake, which may have influenced production. Yield declines for ‘Wyldewood’ were noted over 3 years at the Mountain Grove site, with similar declines noted for other cultivars at this site; questions remain concerning long-term productivity of elderberry plantings. Table 1 summarizes the harvest parameters for ‘Wyldewood’ and the standard ‘Adams II’. See Finn et al. (2008) for additional information on the effect of environment on elderberry productivity, additional yield information, and statistical analysis.

Phenology and harvest parameters for ‘Wyldewood’ and ‘Adams II’ elderberry at two Missouri sites from 2004 to 2006 (excerpted from Finn et al., 2008).

‘Wyldewood’ was rated as slightly to moderately susceptible to a leaf spot disease tentatively identified as Pseudomonas viridiflava Burkholder (Dowson). Eriophyid mites (Eriophyidae) were noted as a slight problem at both sites. Disease and mite susceptibility for ‘Wyldewood’ was not significantly different from ‘Adams II’ (Finn et al., 2008). Plants have not been virus-indexed.

A limited number of unrooted cuttings are available for test purposes to federal and state experiment stations from University of Missouri and Missouri State University by contacting the authors.

‘Wyldewood’ elderberry plant (A) and fruit cyme (B). 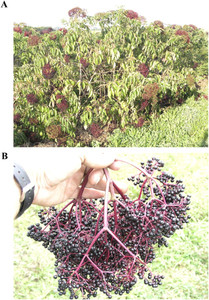