Kiona™ originated at Prosser, WA, from a cross between ‘Glacier’ and ‘Cashmere’ made in 1980 by Tom Toyama, former stone fruit breeder at WSU (Fig. 1). ‘Glacier’ was selected as ‘PC7144-7’ from a cross of ‘Stella’ × ‘Early Burlat’. ‘Glacier’ is a very large, dark red cherry that ripens 6 to 9 d before ‘Bing’ and produces a good crop of flavorful, exceptionally large fruit (15 to 16 g and 33 mm width is not uncommon). However, the commercial success of ‘Glacier’ has been limited as a result of difficulties consistently achieving acceptable fruit firmness. ‘Cashmere’ originally selected as ‘PC7144-3’ is a full sib of ‘Glacier’ released in 1990 by Ed Proebsting, a former WSU horticulturist. ‘Cashmere’ fruit are dark red to mahogany when ripe, generally ≈8 to 11 d before ‘Bing’. Dormant flower buds appear to have very good cold-hardiness (Proebsting, unpublished data). Factors limiting the planting of ‘Cashmere’ include its unimpressive size and susceptibility to rain-induced splitting.

The original testing number for Kiona™ was ‘PC8007-2’ and this was used as the cultivar denomination. The original seedling tree located in block B53 at the Roza experimental farm, WSU–Irrigated Agriculture Research and Extension Center, (WSU-IAREC), Prosser, was selected in 1987 and propagated on Mazzard (P. avium) rootstock for further testing. Bud wood of Kiona™ was made available worldwide to individual grower cooperators under testing agreement beginning in 1999, the same year additional test trees on Mazzard and on Gisela™ 6 rootstocks were planted for yield evaluations in Prosser, WA, and in The Dalles, OR. Kiona™ was released in Oct. 2007 by the WSU Agricultural Research Center and patented (USP PP20, 256) on 8 Dec. 2009.

All color descriptions are based on The Royal Horticultural Society's color chart (Royal Horticultural Society, 1995) unless otherwise stated. Kiona™ is a semi-vigorous and productive cherry with a growth habit similar to ‘Bing’ but slightly more spreading. Leaves are medium to long, elliptical with an acute tip, rounded base, and serrated margins. There are several large reniform grayed-purple (185B) nectary glands at the base of each leaf. Kiona™ is self-fertile (the S-locus genotype is S4′ S9), has an average of five fruit buds per fruit spur, and generally blooms 4 to 7 d after ‘Bing’. Fruit of Kiona™ are large (11 to 12 g), symmetrical, and have a shallow suture (Fig. 2). Pedicel length is long (≈43 mm) with a very thin diameter. Fruit skin is red–purple (59A) in color, smooth with minimal thickness, and moderate tendency to crack after rain. Fruit flesh is red–purple (59A) in color, smooth, and has medium juiciness but excellent eating quality. The stone is large, broad elliptical, and grayed-orange (164C) in color. No resistance to common Pacific Northwest diseases such as powdery mildew and bacterial canker has been noted.

Kiona™ was propagated on Mazzard rootstock from the original seedling tree at the Roza experimental farm, WSU-IAREC, Prosser in 1987 and planted into second-phase trials at the same location. Further propagation from these second-phase trees onto Mazzard and Gisela™ 6 rootstocks took place in 1997. Field observations on Mazzard rootstock from 2002 to 2006 in Prosser, WA, indicate that Kiona™ is early-maturing and produces red–purple fruit that are larger than ‘Bing’ fruit (Table 1). Productivity on Mazzard is moderate but commercially acceptable. However, regional recommendations are to grow Kiona™ on the precocious Gisela® rootstock series for greater yields and earlier return on investment. The two current market leading cultivars for the Pacific North West at a similar harvest timing to Kiona™ are Santina and Tieton. Kiona™ is an improvement on these cultivars as a result of its large fruit size, excellent fruit flavor, balanced cropping (i.e., neither prone to overcropping like ‘Santina’ nor undercropping like ‘Tieton’), and resistance to pistil doubling (Whiting, unpublished data). Kiona™ along with ‘Tieton’ and one of the parents, ‘Glacier’, and grandparent, ‘Early Burlat’, have the 237 bp simple sequence repeat fragment from ‘BPPCT034’ that is predictive for large fruit size in cherry (Zhang et al., 2009).

Kiona™ flowers are self-fertile and bloom 4 to 7 d later than ‘Bing’ in Prosser, often escaping the early spring frost damage. There are no commercially relevant sweet cherry cultivars with which Kiona™ is pollen-incompatible and growers are recommended to include one or multiple pollenizer genotypes, including Benton™ ‘Skeena’, Cashmere™, and Regina™, at the standard ratio of 10% to maximize production.

Fruit flavor and texture of Kiona™ are outstanding for an early-maturing sweet cherry. The total soluble solids content of Kiona™ fruit is similar to or greater than that of ‘Bing’; however, the early sugar development and high acidity ensure a good balance of sweetness and acidity that contributes to the unique flavor of this variety that is highly sought after by consumers. Field observations on Gisela™ 6 rootstock at The Dalles, OR (Table 2) indicate that Kiona™ matures earlier than ‘Bing’ and produces good-flavored, light to marbled red fruit that are slightly larger than fruit from ‘Bing’. The main drawback in this cultivar is the soft texture, which will limit its potential for export to distant overseas markets without gibberellic acid sprays. In comparison with ‘Tieton’ (an early cultivar within the same harvest window) and other dark sweet cultivars, Kiona™ accumulates sugars at a much lighter exocarp color and should be harvested at a lighter color than standard dark sweet cherry cultivars to minimize flesh softening.

Comparisons of fruit characteristics between Kiona™ and ‘Bing’ grown on Gisela™ 6 rootstock at The Dalles, OR, cemetery block.z 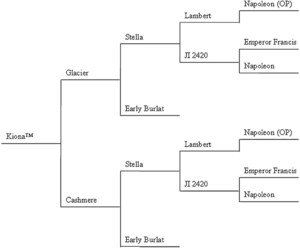 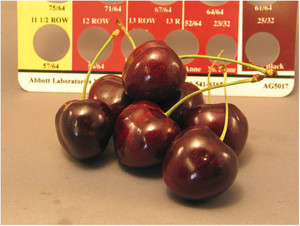