‘Rafel’ and ‘Belgida’ are mid- to early-ripening apricot cultivars (Prunus armeniaca L.) with good yield, excellent fruit quality, self-compatibility, and resistance to Sharka, a disease caused by the Plum pox virus, a serious limiting factor for apricot production in Europe. Their fruits have excellent organoleptic characteristics and are larger than the traditional Valencian cultivars. ‘Rafel’ and ‘Belgida’ are very well adapted to the climatic conditions of the Valencia and Murcia areas.

‘Rafel’ and ‘Belgida’ both resulted from a cross made in 1993 at Valencia, Spain, between the North American cultivar Goldrich and the Spanish cultivar of unknown origin, Ginesta (Fig. 1). This cross was made with the objective of obtaining cultivars resistant to Sharka, early- to midripening and self-compatible with good fruit quality and better size than traditional Valencian cultivars. ‘Goldrich’ was selected as the female parent as a result of its resistance to Sharka, its large fruit size, and its adaptability to mild winters. ‘Ginesta’ was used as the male parent because it ripens early in the season, has excellent fruit quality, and is self-compatible.

Comparative analysis of tree and fruit characteristics of ‘Rafel’, ‘Belgida’, ‘Ginesta’, and ‘Goldrich’ under experimental conditions in IVIA, Valencia, Spain. 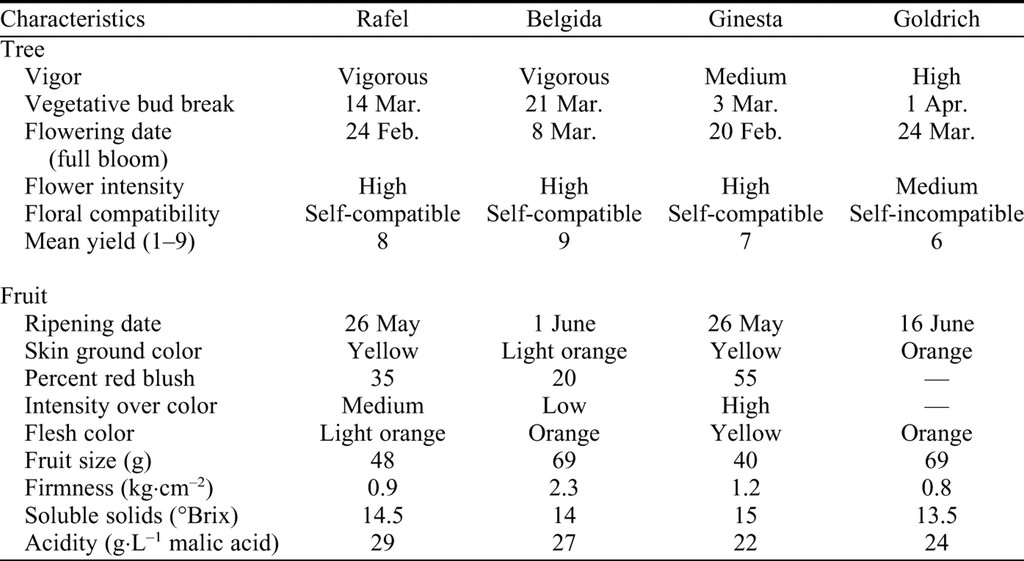 Sharka disease, caused by the Plum pox virus (PPV), is a serious limiting factor for temperate fruit production in those areas where the virus has spread (Kölber, 2001). During the 1980s and 1990s, apricot production was seriously affected by PPV in Spain, France, and Italy (Roy and Smith, 1994). All native apricot cultivars are susceptible to PPV and removal of infected trees was ineffective in eradicating the disease (Llácer and Cambra, 1998), whereas several cultivars from North America such as ‘Goldrich’, ‘Sunglo’, ‘Orange Red’, and ‘Stark Early Orange’ show resistance to PPV and are used as parents in breeding programs aimed at introducing resistance to PPV (Egea et al., 1999). In the case of ‘Rafel’ and ‘Belgida’, ‘Goldrich’ was used as the donor of resistance looking for better adaptability to warm winters. Evaluation of PPV resistance was performed in controlled greenhouse conditions following the methodology described by Moustafa et al. (2001). Seedlings grafted on peach GF-305 infected with PPV went through two cycles of cold treatment after inoculation to mimic two normal season cycles to speed up the selection followed by enzyme-linked immunosorbent analysis and polymerase chain reaction analysis. No symptoms were observed on either cultivar and presence of the virus was not detected by either analysis method. Additionally, three trees per accession were planted in a production area heavily infected with PPV. These trees were surrounded by infected, susceptible cultivars and inoculated by chip budding in the open field with the Dideron-type PPV isolate (López-Moya et al., 2000). No symptoms were observed 3 years after inoculation. PPV symptoms were observed in the neighboring susceptible trees. Results showed that ‘Rafel’ and ‘Belgida’ are resistant to Dideron-type PPV isolates.

Time of bloom and floral compatibility.

The Rafel and Belgida cultivars are protected by the Spanish Office for Varietal Protection with the registration numbers 2001/4347 and 2007/4737, respectively. Virus-tested plants are available from authorized nurseries in Spain registered at http://www.agroalimed.es. The plants are tested and free of the following viruses: PPV, Prune dwarf ilarvirus, Prunus necrotic ringspot ilarvirus, Apple chlorotic leafspot closterovirus, and Apple mosaic ilarvirus.

Pedigree of ‘Rafel’ and ‘Belgida’ apricots. 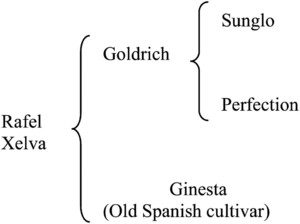