Incidence of soft scald after 0 or 5 d of preconditioning at a mean ambient temperature of 17.5 °C followed by 3 to 5 months cold storage at 1 °C in Maine from 2002 to 2007 (n = 250). The asterisk indicates a significant difference from the untreated control based on analysis of variance LSMEANS (P = 0.05) within each year. 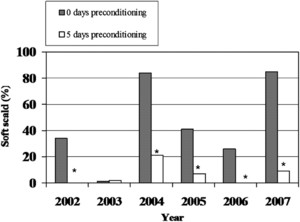