Dormancy of Illinois bundleflower is the result of a hard seedcoat and abrasion of individual seed with a razor blade or knife is more effective than sulfuric acid soaks at achieving high FGP (Call, 1985; Latting, 1961). There are few publications regarding scarification of showy ticktrefoil seed, although concentrated sulphuric acid soaks are recommended to break dormancy of D. intortum (Mill.) Urb. and D. uncinatum (Jacq.) DC. (ISTA, 2010). General recommendations suggest scarification of Illinois bundleflower and showy ticktrefoil seed before field sowing (USDA, NRCS, 2010a).

Scarifiers have been used to alleviate dormancy in Ruby Valley pointvetch (Oxytropis riparia Litv.; Hicks et al., 1989) and mastic tree (Pistacia lentiscus L.; Piotto, 1995). Varying scarification durations of 5 to 30 s were required for different seed lots of Ruby Valley pointvetch, a legume, for optimum germination (Hicks et al., 1989). Scarifier (Forsberg, Thief River Falls, MN) equipment is simple to operate and consists of a horizontally mounted rotary propeller within a steel drum lined with 40-grit sandpaper (Liu, 2007). Although mechanical abrasion by using the scarifier is a low-cost method with good repeatability, there is a lack of methodological standardization, including running time, seed moisture content, amount of surface damage, and reference materials (Liu, 2008). Mechanical scarification using a scarifier is a more practical method of scarification than other techniques (Hicks et al., 1989).

Vigor tests are more accurate in determining field crop performance of a seed lot than standard germination tests and their use has increased as a result of consumer demand (Ferguson, 1993). Vigor is a concern to growers because a loss of vigor may indicate a reduction in field performance (Copeland and McDonald, 2001). Contemporary standards use electrical conductivity (EC) and accelerated aging for determining seed vigor (ISTA, 2010); however, seed companies use a variety of vigor-testing methods (Copeland and McDonald, 2001). Imbibitional damage of pea cotyledons resulted in higher EC of leachate when the seedcoat was removed, indicating a relationship between “intactness” of the seedcoat and embryo health (Powell and Matthews, 1978). In studies involving soybean [Glycine max (L.) Merr.], germination percentage of seed subjected to accelerated aging procedures was used to determine seed vigor (Baskin, 1977).

Single seed lots of ‘NE Ecotype’ Illinois bundleflower and ‘PA Ecotype’ showy ticktrefoil were obtained from Ernst Conservation Seeds (Meadville, PA) and used for the following experiments. For both seed lots, there was no labeled dormancy. After purchase of seed lots, seeds were stored in plastic bags under cool and dry conditions (7 °C and 32% relative humidity) for 5 months before the start of experiments.

Seeds were subjected to scarification by placing 1.0 g seed on 40-grit sandpaper within a Model 6K030G scarifier (Forsberg, Thief River Falls, MN) that was turned on for 3, 6, or 12 s. Materials and general operating procedures for the scarifier (Forsberg) were described by Liu (2007). It consists of a 2300-cm3 capacity stationary drum lined with sandpaper fitted into a cylinder with a rotating propeller. After scarification, seed were placed onto two layers of germination No. 385 blotters (Seedburo Co., Chicago, IL) moistened with 20 mL distilled water contained in 125 × 80 × 20-mm transparent polystyrene boxes with tight-fitting lids and incubated at 15, 20, or 20 to 30 °C (16 to 8 h) in darkness. Non-scarified seed were included as a control. Suggested testing temperature for Illinois bundleflower is alternating 20 to 30 °C (AOSA, 2007a). Germination rules for showy ticktrefoil have not yet been determined, but the suggested temperature for D. uncinatum and D. intortum is 20 to 30 °C (ISTA, 2010). The number of seeds germinated (those having a visible radicle) were counted daily and removed.

Scarified seed were subjected to an accelerated aging test using basic principles described by Baskin (1977). The accelerated aging test is a rapid, simple determination of vigor that can be applied to many plant species (Copeland and McDonald, 2001). Seeds (5 g) were contained in a metal cylinder and placed into a lidded plastic box holding 250 mL of distilled water. The chamber was maintained at 41 °C for 72 h at nearly 100% relative humidity. Seed moisture content was calculated before and after experiments by using a high-temperature drying method (130 °C for 1 h) and two replications with results expressed as the percentage weight of water lost from the initial seed weight (ISTA, 2010).

Procedures for EC testing were conducted by following methods from Hampton and TeKrony (1995) and modified by Wang et al. (2004) for small seeds. Seeds (5 g) were weighed, placed into 100 mL distilled water (water purity less than 5 μS·cm−1), and incubated at 20 °C in darkness for 24 h. Hard seed then were removed, blotted dry, and weighed. Hard seed were not subtracted from the initial seed weight before final calculations because subsequent incubation tests determined they were slowly imbibing and capable of leaking electrolytes. EC was measured using an EC Testr11 plus meter (Oakton Instruments, Vernon Hills, IL) and results were expressed as μS·cm−1·g−1.

Seedling grow-out tests may be used to distinguish between strong and weak seedlings within a seed lot (Hartmann et al., 2002). The seedling grow-out test was performed using the following procedure. Redi-Earth Plug and Seedling peat-based substrate (SunGro Horticulture, Bellevue, WA) was placed into 20-mm-width × 37-mm-depth plugs, irrigated, and one scarified or non-scarified seed was sown per plug. Plugs were misted and a clear plastic dome was placed on top to prevent moisture loss. The growth chamber was set at 20 to 30 °C [14 to 10 h; dark-light (71 μmol·m−2·s−1)]. Emergence (having a visible hypocotyl) was recorded daily. Abnormal seedlings were counted as those not possessing essential structures required to produce a healthy, mature plant (AOSA, 2007b). After 3 weeks of seedling growth, plants were cut at the substrate surface and seedling dry weight determined (oven drying at 80 °C for 24 h).

Damage caused by scarification was determined by viewing through a dissecting microscope. Seeds were subjected to scarification using the procedure previously described. Images were captured using a fiberoptic illuminator and a Nikon Coolpix 8700 digital camera (Tokyo, Japan).

All seed germination experiments were arranged in a randomized complete block design with four replications per treatment. Experiments for determination of EC were arranged randomly with three replications per treatment. From these germination counts, the angular transformation [arcsin √% transformation in degrees (deg.)] of FGP or final emergence percentage (FEP), days to 50% FGP (G50, an inverse measure of germination rate), days between 10% and 90% FGP (G10–90, a measure of germination uniformity), and square root transformation of abnormal seedling percentage were subjected to analysis of variance using PROC GLM (SAS 9.1; SAS Institute, Inc., Cary, NC). Percentage data transformations were followed as per Gomez and Gomez (1984). Time to 10%, 50%, and 90% germination was based on a mathematical formula (Olszewski et al., 2009):

Final germination percentage (FGP) and its angular transformation (deg.), days to 50% of FGP (G50), and days between 10% and 90% of FGP (G10–90) of Illinois bundleflower after mechanical seed scarification and incubation at three temperature regimes. 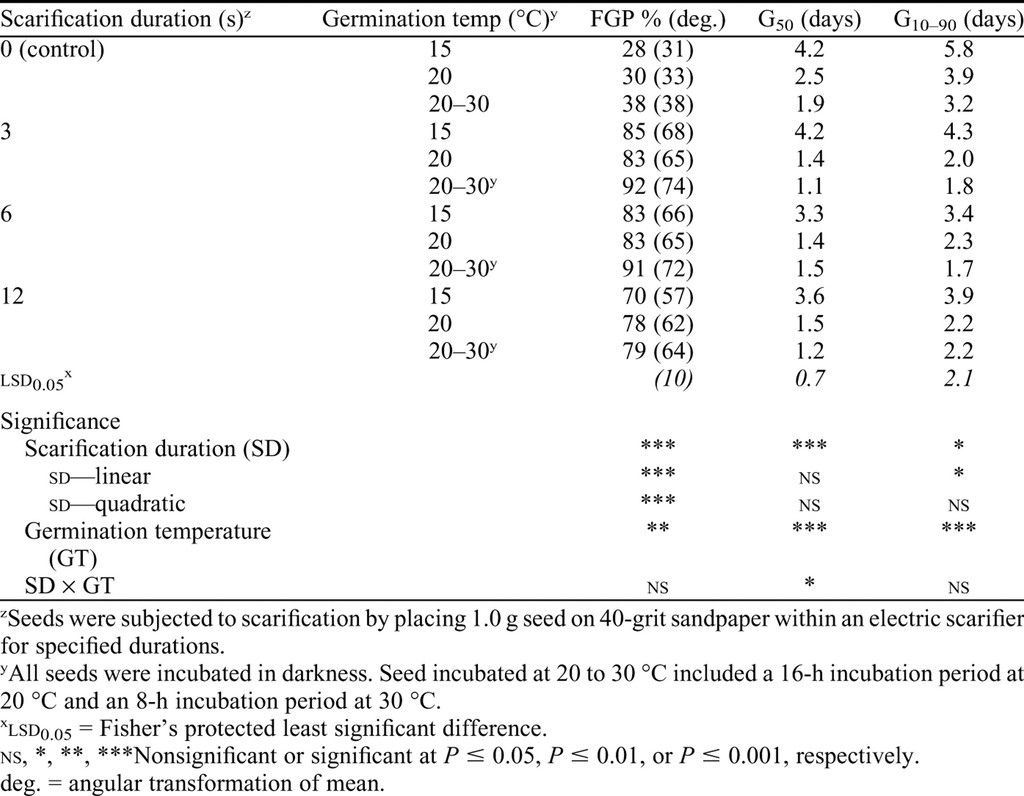 Final germination percentage (FGP) and its angular transformation (deg.), days to 50% of FGP (G50), and days between 10% and 90% of FGP (G10–90) of showy ticktrefoil after mechanical seed scarification and incubation at three temperature regimes. 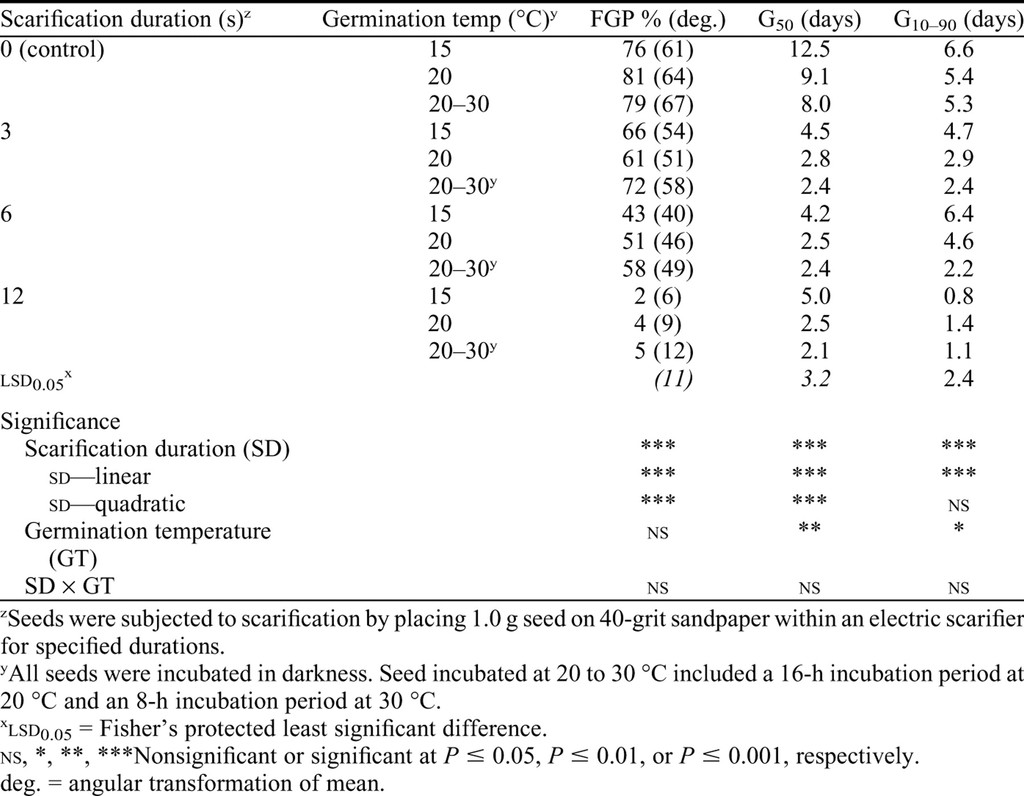 Final germination percentage (FGP) and its angular transformation (deg.), days to 50% of FGP (G50), and days between 10% and 90% of FGP (G10–90) of Illinois bundleflower and showy ticktrefoil after mechanical seed scarification and accelerated aging.z

Final emergence percentage (FEP) and its angular transformation (deg.), abnormal seedling percentage (ASP) and its square root transformation (√), and seedling dry weight of Illinois bundleflower and showy ticktrefoil after mechanical scarification and sowing into peat-based substrate and subsequent incubation at 20 to 30 °C (14 to 10 h; dark-light) for 3 weeks.

A specialized U-shaped depression within the seedcoat, called the pleurogram, is located on Illinois bundleflower (Fig. 2A), whereas a conspicuous oval-shaped, slightly raised hilum is located on showy ticktrefoil (Fig. 2B). After 3 s of mechanical scarification, the seedcoat was abraded along the periphery of the seed and, sometimes, damage penetrated into the cotyledonary tissue (Fig. 2C–D). Damage was similar for Illinois bundleflower and showy ticktrefoil with regard to the peripheral damage of the seedcoat. Occasionally, seed had severe tissue obliterations after 3 s of mechanical scarification. No damage to the hilum or the pleurogram was observed after 3 s in a scarifier. Increasing the duration of scarification increased the amount of peripheral damage and the amount of seed tissue obliteration.

Germination and vigor tests of mechanically scarified Illinois bundleflower seed indicated that FGP, G50, and FEP can be improved after a 3-s scarification procedure (Tables 1 and 4). Additionally, we found benefits at suboptimal germination temperatures. Seedcoat damage was moderate, but sometimes relatively large obliterations occurred around the periphery of the seed (Fig. 2C). Increasing the scarification duration increases the amount of obliteration; thus, for successful scarification, the amount of damage requires visual monitoring as well as germination and vigor testing. Mechanical scarification using a scarifier has direct commercial applications for increasing stand establishment (Hicks et al., 1989). Results from seeding of Illinois bundleflower in the field indicated that subsequent stands can vary widely by year and that initial, rapid plant establishment is important (Dovel et al., 1990). Compared with “nicking” techniques with razor blades or knives and sulphuric acid soaks that increased germination percentage of Illinois bundleflower (Call, 1985; Latting, 1961), the use of a scarifier is a practical method of scarification.

Use of a scarifier could potentially aid restoration ecologists to rapidly break physical dormancy of native legumes before sowing or to enhance uniformity of native plug production in greenhouses. Mechanical scarification using a Forsberg seed scarifier is a more successful and feasible commercial method than acid scarification of Ruby Valley Pointvetch, a legume (Hicks et al., 1989); however, equipment specifications of motor size (one speed) and single-sized form-fitting sandpaper liner (40 grit) limit the use of this instrument for native legumes. A lower speed seed scarifier reduced abrasion in cereal caryopses and replacing the single-speed motor with a dual one-third and one-sixth horsepower motor has advantages (Liu, 2007). Although showy ticktrefoil seed can be successfully scarified (no loss of FGP, increased germination rate, and increased uniformity compared with the control) with 60-grit sandpaper by a hand scarification technique, we determined that a scarifier damaged showy ticktrefoil seed. Germination and vigor benefits were obtained for Illinois bundleflower when the scarifier was used, which resulted in increased FGP at multiple temperatures, decreased G50, decreased G10–90, and increased FEP compared with using non-scarified seed. 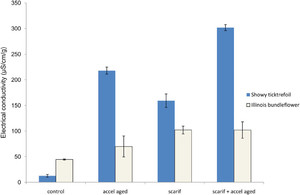 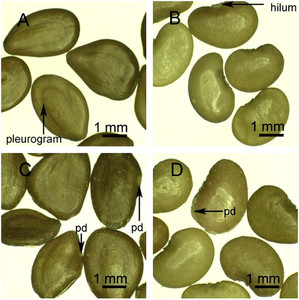