Dense-flowered loosestrife (Lysimachia congestiflora Hemsl.), a mat-forming perennial herb, is native throughout much of south, southwest, and central China with a subtropical continental monsoon climate (Chen and Hu, 1989). The species is as a semievergreen herb in central China; in south China, it develops as an evergreen plant. It grows within a wide altitudinal range from sea level to 2100 m in dankness in forest edges or roadsides (Chen and Hu, 1989). L. congestiflora is a quantitative long-day plant (Zhang et al., 1995) and blooms from April to October in Zone 7 (U.S. Dept. of Agriculture, 1990). The species is famous both as an ornamental plant and a Chinese herbal medicine (Zheng et al., 2009). It is currently marketed as a bedding plant, hanging basket, and potted plant in North America and Europe. As an ornamental plant, L. congestiflora is grown primarily for its creeping stems as well as its terminal cluster of bright yellow flowers and green foliage.

In 2006, several plants of L. congestiflora were collected in the Yangtze River Basin in an effort to select plants with superior landscape characteristics. The collected plants were grown at Huazhong Agriculture University Nursery (long. 30°28′ N, lat. 114°21′ E) for selection. One plant discovered at Lushan (Jiangxi Province) was judged as having attractive purple veins compared with other plants observed. To determine its commercial value, cuttings of the selected plant were sent to Huangshi Nursery (long. 30°10′ N, lat. 115°02′ E) and Xianning Nursery (long. 29°51′ N, lat. 114°20′ E) in central China for further evaluation in 2007. After 3 years of growth, the plants continued to retain their foliage color. In accordance with the International Code of Nomenclature for Cultivated Plants, the name ‘Zimai’ was selected to indicate the vein color of the plant (Brickell et al., 2004). Voucher specimens (Zheng and Chen 0810) were deposited at the herbarium of Huazhong Agriculture University.

The performance of L. congestiflora ‘Zimai’ under different shade levels was evaluated at Huazhong Agriculture University Nursery in central China. Growth tests were initiated using well-rooted and three-node terminal cuttings. Each of the 50 cuttings was grown under 75%, 47%, 22%, or 0% shade (maximum light intensity was 818.3 umol·m−2·s−1 in March) in a completely randomized design. Light was limited by covering the outdoor plots with a voile net or black woven shadecloth. The experiment was conducted in yellow brown sandy loam with regular irrigation (3 to 5 L·m−2 per irrigation, one to three irrigations per week), fortnightly fertilization [with nitrogen (N) at 3.3 g·m−2 first and later N at 4.4 g·m−2 16N–8P–16K], roguing of weeds when necessary, and a temperature range of 8 to 33 °C. After 60 d (from 10 Mar. to 10 May 2009), data were recorded, including the number of branches, leaves, and flowers, average length of the main stem and internodes, and shoot dry weight per plant.

The plants were grown in the field (50 m2 with full sun) of Huazhong Agriculture University Nursery, Huangshi Nursery, and Xianning Nursery with regular irrigation (3 to 5 L·m−2 per irrigation, one to three, two to six, and zero to two irrigations per week in spring, summer and fall, and winter, respectively), monthly fertilization (with N at 3.3 g·m−2 in March and September and N at 4.4 g·m−2 16N–8P–16K in other months) and hand roguing of weeds when necessary from 2007 to 2009 for additional evaluation, including disease and pest susceptibility, reseeding or invasiveness, heat tolerance in July (over 3 years: average temperature of 29.8 °C; maximum temperature of 39.7 °C), and freezing tolerance in January (average temperature of 2.0 °C; minimum temperature of –5.3 °C). Performance was evaluated by the proportion of vigorous leaves and visual quality ratings (scores of “1,” “3,” or “5” for poor, acceptable, or excellent quality, respectively). The panel of quality evaluators was composed of 17 postgraduates (five doctors and 12 masters) from Key Laboratory of Horticultural Plant Biology (Huazhong Agricultural University). L. congestiflora ‘Zidie’, wild-type L. congestiflora, and L. nummularia ‘Aurea’ were used as the control plants. Data were analyzed using analysis of variance and Duncan's multiple range test. Proportion of vigorous leaves (%) was subjected to arcsine transformation for statistical analysis.

Shade levels had a strong influence on the growth and flowering of ‘Zimai’, although the species grew well under different levels of shade (Table 1). Leaf area and length of the main stem increased with the increase in shade; meanwhile, the number of leaves and flowers and the shoot dry weight decreased with the increase in shade levels. The number of branches and internode length showed no obvious difference across levels of shade. Leaf color was affected by shade as well; the veins under full sun were dark purple–red (RHS 185B); in 75% shade, they were dark purple–brown (RHS 187A). Thus, full sun is better for a bright leaf color and to obtain abundant leaves and flowers; it results in the best growth and ornamental quality for ‘Zimai’.

L. congestiflora ‘Zimai’ showed strong resistance in hot summer and freezing winter conditions. During hot days in July, the proportion of vigorous leaves of ‘Zimai’ showed no significant difference with L. congestiflora ‘Zidie’ and wild-type L. congestiflora but were significantly greater than those of L. nummularia ‘Aurea’ as shown by Duncan's multiple range tests (Table 2). This result indicates that the heat tolerance capability of ‘Zimai’ was similar to ‘Zidie’ and wild-type L. congestiflora but stronger than that of ‘Aurea’. During the freezing days of January, the proportion of vigorous leaves of ‘Zimai’, ‘Zidie’, and wild-type L. congestiflora were significantly greater than that of ‘Aurea’ suggesting that the former exhibited stronger freezing tolerance than the latter (Table 2). Although the leaves on the stem base were injured by continuous snow cover for 30 d in Jan. 2008 (Fu et al., 2008), the plants recovered quickly the next spring. In conclusion, ‘Zimai’ exhibited strong heat and freezing tolerance.

During the experimental years, ‘Zidie’ had colorful leaves (Zheng et al., 2009), ‘Zimai’ had purple-veined leaves, wild-type L. congestiflora had green leaves, whereas L. nummularia ‘Aurea’ had many white sun-bleached leaves. Thus, the quality degree of four tested plants in July was: ‘Zidie’ > ‘Zimai’ > wild-type L. congestiflora > ‘Aurea’ (Table 2). In January, however, they were equivalent, because all of their partial basal leaves perished.

In other aspects, ‘Zimai’ was free of major diseases and pest. The plant spread by its creeping stems but exhibited little invasiveness because no seed was obtained in the field.

‘Zimai’ was readily propagated through creeping stem cuttings. When the temperature was up to 15 °C, more than 98% of cuttings started rooting from their basal nodes within 10 d of covering by transparent polythene film to keep the temperature and high humidity of the soil surface. For ground cover, ‘Zimai’ can be grown under full sun to partial shade in yellow brown soil or sandy soil with regular irrigation. For potted plants or hanging baskets, it can be planted in the substrate with equal volumes of vermiculite or perlite and humus soil and fertilized with N at 50 ppm 15N–9.9P–14.1K when necessary. The plant can develop as an evergreen plant in the greenhouse when the lowest temperature is greater than 5 °C. It can be grown in central China and warmer places as well as other regions with a similar climate.

The patent application of L. congestiflora ‘Zimai’ will be submitted to the Patent Office of Hubei Province, China. The patent rights will be assigned to Huazhong Agriculture University. Inquiries regarding ‘Zimai’ can be made by sending an e-mail to yedizhw@yahoo.com.cn. Plants for research purposes may be obtained directly from the author.

The flowering plants of L. congestiflora ‘Zimai’ in May 2009. 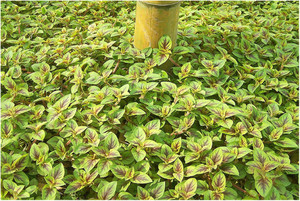 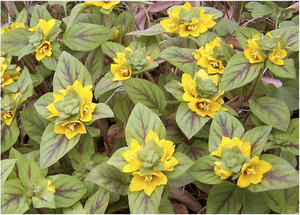