‘Ruby Falls’ was derived from a F2 family resulting from the controlled hybridization of ‘Covey’ × ‘Forest Pansy’ in 2001. ‘Covey’ [U.S. Plant Patent (USPP) 10,328) was introduced by Brotzman's Nursery Inc., Madison, OH, in 1997 and is described as a green-leafed, weeping form of eastern redbud with light purple flowers (Dirr, 2009). ‘Forest Pansy’ (USPP 2556) is a nonweeping, purple leaf form of eastern redbud discovered in 1947 by Forest Nursery, McMinnville, TN (Dirr, 2009). The initial hybridization to obtain F1 seeds was accomplished by enclosing flowering potted trees of both cultivars in a screen cage and introducing a small hive of bumblebees [(Bombus impatiens Cresson), Koppert Biological Systems, Inc., Romulus, MI]. Preliminary research in our program provided strong evidence that eastern redbud is self-incompatible; therefore, seeds obtained from two isolated parents should be hybrid. Seeds were only obtained from the ‘Covey’ parent. All F1 trees showed normal stature (nonweeping) and green leaves. F2 seeds were obtained by growing 19 F1 hybrid progeny in isolation from other redbuds at the Sandhills Research Station, Jackson Springs, NC. F2 seeds were harvested Fall 2005. Dried seeds were scarified with hot water (≈82 °C) and germinated in a greenhouse in Raleigh, NC. Purple leaf seedlings were identified at the first true leaf stage, selected, and grown in a greenhouse the first growing season. Seedlings demonstrating weeping architecture generally could be identified ≈4 to 6 months after germination. Forty-two weeping seedlings with purple leaves were transplanted to the field in Spring 2006. ‘Ruby Falls’, selected in 2006 and tested as NC2006-8, was selected from this population for its superior purple leaf color and weeping growth habit. ‘Ruby Falls’ was released by North Carolina State University (NCSU) in 2009.

‘Merlot’ was derived from a F2 family resulting from the hybridization of ‘Texas White’ (C. canadensis var. texensis) × ‘Forest Pansy’. ‘Texas White’ (unpatented) was released by Germany Nursery, Forth Worth, TX, in the late 1960s, and is described as a white-flowered form of C. canadensis var. texensis (Dirr, 2009). The initial hybridization occurred on the campus of NCSU in 1998. Seeds were harvested from a tree of ‘Texas White’ adjacent to two trees of ‘Forest Pansy’ in a campus landscape planting. Because Texas redbud is considered to be self-incompatible, seeds harvested from ‘Texas White’ were assumed to be of hybrid origin. The 113 F1 seedlings obtained were planted in isolation at the Sandhills Research Station in Spring 1999. All F1 plants produced purple flowers. Assuming white flower color is recessive, this suggests all plants were hybrids. Limited numbers of F2 seed were collected and bulked from the F1 plants in Fall 2002. These seeds were germinated in a greenhouse in Winter 2003. From ≈100 seedlings, four seedlings having dark purple leaves were selected and grown in a greenhouse in 2003. These four seedlings were transplanted to the field in Spring 2004, and one plant, designated NC2004-6, was selected for its glossy purple leaf color, attractive reddish purple flower color, and semiupright growth habit. ‘Merlot’ was released by NCSU in 2009.

‘Ruby Falls’ is a new and distinct cultivar of eastern redbud being released as an alternative to ‘Covey’ (Lavender Twist™). ‘Ruby Falls’ was selected for its weeping growth habit and attractive purple leaf color (Figs. 1 and 2). Retention of purple color in leaves during the growing season is similar to that of ‘Forest Pansy’. The adaxial surface color of leaves in spring through early summer is purple (RHS N77A), whereas the abaxial surface is red/purple (RHS 59A). Purple pigmentation in the leaf diminishes throughout summer, becoming burgundy before transitioning to green in late summer in North Carolina (RHS 137A, adaxial surface). Leaves are suborbicular (immature) to broad–ovate (mature), averaging 8.8 cm length and 10.1 cm width at maturity on 3-year-old trees. Flowering is prolific, and flower color is an attractive reddish purple (RHS 78B) (Fig. 3). Comparative trials in various commercial nursery settings show enhanced lateral branching compared with ‘Covey’. ‘Ruby Falls’ has been trialed for 4 years in Jackson Springs, NC (USDA hardiness zone 7b) and has proven fully cold-hardy in this location. Long-term trials have not been conducted in other regions, but it is anticipated ‘Ruby Falls’ will be well adapted to USDA hardiness zone 6 and higher (USPP applied for).

‘Merlot’ is a new and distinct cultivar of redbud being released as an alternative to ‘Forest Pansy’. ‘Merlot’ was selected for its attractive purple leaf color and semiupright growth habit (Fig. 4) in contrast to the open, spreading habit of ‘Forest Pansy’. Leaves of ‘Merlot’ are thicker and glossier than those of ‘Forest Pansy’, similar to its ‘Texas White’ parent (Fig. 5). Leaves are obcordate (immature) to reniform (mature) averaging 12.8 cm in length and 13.1 cm width at maturity. Leaves maintain their attractive appearance well into the latter part of the growing season, unlike those of ‘Forest Pansy’, which often become unattractive and necrotic in late summer in the southern United States. Retention of purple color in leaves is similar to but slightly inferior to ‘Forest Pansy’. Color of adaxial and abaxial surfaces of young leaves early in the growing season is RHS N77A and RHS 59A, respectively. Purple pigmentation in the leaf diminishes throughout summer, becoming burgundy before transitioning to green in late summer in North Carolina (RHS 137A, adaxial surface). ‘Merlot’ demonstrates semiupright architecture, excellent branching, and dense growth, superior to ‘Forest Pansy’. Flowering is prolific, and flower color is an attractive bright reddish purple (RHS N78C; Fig. 6). Fertility of ‘Merlot’ is reduced compared with many redbuds. Fruit develop after flowering, but to date, viable seed production has been limited. Trials of ‘Merlot’ and ‘Forest Pansy’ in Jackson Springs, NC, and Grove, OK, have shown superior heat tolerance of ‘Merlot’ compared with ‘Forest Pansy’, typical of its ‘Texas White’ parent. ‘Merlot’ has been trialed for 6 years in Jackson Springs, NC (USDA hardiness zone 7b) and has proven fully cold-hardy in this location. Long-term trials have not been conducted in other regions, but it is anticipated ‘Merlot’ will be well adapted to USDA hardiness zone 6 and higher.

‘Ruby Falls’ is well suited for use as a single-specimen plant, where its weeping architecture and purple leaf color can be best displayed. ‘Merlot’ is appropriate for residential and commercial landscape plantings either as a specimen tree or in group plantings, and its semiupright habit makes it well suited for street plantings. Both cultivars should be situated in full sun to promote maximal development of purple leaf color. Purple leaf color will persist longer into summer in cooler growing regions.

Propagation of ‘Ruby Falls’ and ‘Merlot’ can be achieved successfully by chip budding onto seedling rootstock of C. canadensis. Propagation by stem cuttings or micropropagation have not been explored.

USPP applications have been submitted for both ‘Ruby Falls’ and ‘Merlot’, and plant patent rights will be assigned to NCSU. Propagation and production rights can be obtained from PlantHaven, Inc., Santa Barbara, CA. Vouchers of both cultivars will be deposited in the NCSU Herbarium. 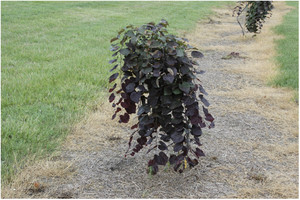 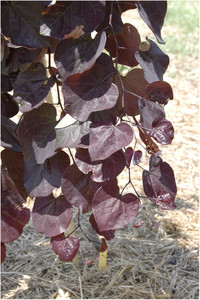 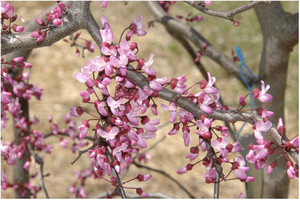 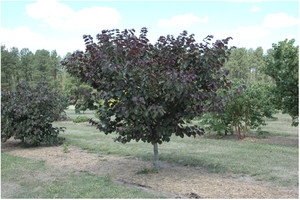 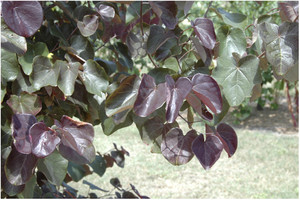 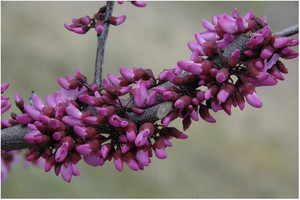