‘ST-5’ turf bermudagrass is an interspecific [Cynodon transvaalensis Burt-Davy × C. dactylon (L.)] shade-tolerant triploid (2n = 3x = 27 chromosomes) hybrid cultivar released cooperatively by the University of Georgia College of Agricultural and Environmental Sciences and the U.S. Department of Agriculture, Agricultural Research Service. ‘ST-5’ was selected in 1993 from 27,700 hybrids made in 1992. This cultivar is a male and female sterile perennial plant that is vegetatively propagated. It has been tested from 1993 through 2007 in numerous replicated tests and at a number of locations. ‘ST-5’ has performed well under normal sunlight in the National Turfgrass Evaluation Program (NTEP) and under up to 70% continuously reduced photosynthetically active radiation light in the 400- to 700-nm wavelength range at Tifton, GA, measured with a Spectrum Technologies, Inc. Dual Radiation Meter (Spectrum Technologies, Inc., Plainfield, IL) at the level of the bermudagrass sod. Shade studies were conducted under a rain-out shelter (opposite end of the shelter used for drought tolerance research) with a fiberglass roof 1.8 m above the plots and which extended 2.7 m beyond the perimeter of the experiments (each plot was 1.8 × 1.8 m in size). Plots had continuous shade except when it rained and the shelter cover moved to the drought-tolerance plots.

Bermudagrass cultivars are widely used in landscaping, home lawns, and on golf courses, but in general do not tolerate shade. The overall turfgrass breeding program at Tifton includes improving the genetic diversity and shade tolerance of ‘Tift’ hybrids. In 1992, we crossed six C. transvaalensis breeding lines (“T” numbers) from Tifton (T572, T573, T574, T575, T576, and T577) selected for their persistence under low management in our breeding nursery with four C. dactylon [T90 and T110 (selected for persistence under close mowing) and ‘Quickstand’ and ‘VaMont’ (selected for cold tolerance)] parents at Tifton, GA. Crosses were made in the field by surrounding each C. transvaalensis parent with a C. dactylon parent in 1.8-m square plots. All crosses were in close proximity of each other so we cannot rule out intercrossing between and among plots. On 7 May 1993, we planted over 27,700 progenies from the 24 cross combinations on 45-cm centers. Once established, plots were mowed three times per week at a 6-mm height. In the fall of 1993, we selected 260 plants (194 were triploid hybrids) that maintained density, color, and tawny mole cricket (Scapteriscus vicinus Scudder) resistance for further testing. One selection, 93-92, was later tested as 94-18, 97-4, 00-07, and Tift #4 and became ‘ST-5’ (ST for shade-tolerant). In the fall of 1993, we made a note that ‘ST-5’ was a “nice dwarf.” It has been tested since 1997 in three field (three replications per test) and three shade (four replications per test) at Tifton, GA, in 23 tests in 19 states in the NTEP trials in one test each in Texas and Arizona and in three tests for insect resistance at Griffin, GA. ‘ST-5’ has also been evaluated in six nonreplicated lawn and golf course roughs and tee plantings. In nonreplicated lawns, ‘ST-5’ rated 7 or 8 for turf quality (1 = poor and 9 = excellent) under up to 70% shade. At greater than 85% shade (where Tifway would not grow), ‘ST-5’ rated 4 for turf quality. At Tifton, GA, ratings are taken monthly from April to November and no insecticides, fungicides, or herbicides [except for 1.12 kg·ha−1 of Atrazine (Helena Chemical Company, Collierville, TN) in March] were applied to the plots. Plots with and without shade at Tifton, GA, received 4.9 g·m−2 nitrogen per month and were mowed three times per week at 12 mm. The “turf quality” rating is a general rating in which density, color, texture, pest resistance, and so on, are considered for evaluating the desirability of the turf. Experiments were randomized complete blocks and data were analyzed using PROC GLM of PC SAS (Statistical Analysis Institute, 2004).

In 1993, we classified the selections we made in the fall of 1993 into very dwarf, dwarf, and ‘Tifway’ types. ‘ST-5’ was in the dwarf class and therefore one of our original controls in the 1997 planted test were Tifdwarf (Burton, 1966b). ‘ST-5’ has shown significantly more shade tolerance (1 = poor, 9 = excellent) than Tifway (Burton, 1966a) and TifSport (Hanna et al., 1997), especially after the first year of establishment (Table 1). Another replicated test planted in 2000 in 60% continuous reduced light in the 400- to 700-nm range showed similar results with end-of-year turf quality rating (for 2000 and 2001) of 5.5 and 5.3, 6.0 and 6.0, and 6.3 and 7.8 for Tifway, TifSport, and ‘ST-5’, respectively (least significant difference ≤ 0.05 = 1.6 and 1.1 in 2000 and 2001, respectively). Turf quality for ‘ST-5’ under normal light is as good or better than Tifway and TifSport (Table 2). Mean turf quality ratings for ‘ST-5’ were not significantly different (P ≤ 0.05) from the top performing cultivars among 42 entries tested at 21 locations in 18 states in the 2003–2006 NTEP trials (www.ntep.org) (Table 3). In the same NTEP trials, ‘ST-5’ was not significantly different (P ≤ 0.05) for dollar spot, Sclerotinia homoeocarpa, and spring dead spot, Ophiosphaerella sp., than the most resistant cultivars (Table 3). It produces a small seed head on a thin peduncle in late May and June (typical of bermudagrass). In most years, ‘ST-5’ tends to produce significantly more seed heads than Tifway and TifSport under nonshade conditions at a 12-mm mowing height, but the number of seed heads can be reduced 25% to 37% by treating monthly with trinexapac-ethyl (4-cyclopropyl-a-hydroxy-methylene-3,5-dioxocyclohexanecarboxylic acid ethyl ester) or Primo (data not shown). Seed heads were also reduced by 65% when mowed three times per week at a height of 24 mm compared with 12 mm (data not shown). ‘ST-5’ is a naturally darker green grass. ‘ST-5’ plant color is as good or better than for Tifway or TifSport (Table 4). In field plots where other grass cultivar/genotypes were present, ‘ST-5’ had significantly better tawny mole cricket resistance than Tifway or TifSport (Table 5). However, in greenhouse studies under no-choice conditions, ‘ST-5’ had a higher population of mole crickets after 30 d than TifSport but showed a similar response as Tifway and Tifdwarf (Table 6). These data indicate a nonpreference type of resistance under field conditions. ‘ST-5’ has similar resistance to the two-lined spittle bug [Prosapia bicincta (Say)] and fall army worm [Spodoptera frugiperda (J.E. Smith)] as Tifway, Tifdwarf, and TifSport (data not shown), but less resistance to the bermudagrass mite [Aceria cynodoniensis (Sayed)] (Table 7); however, the bermudagrass mite is mainly a problem on stressed grass. 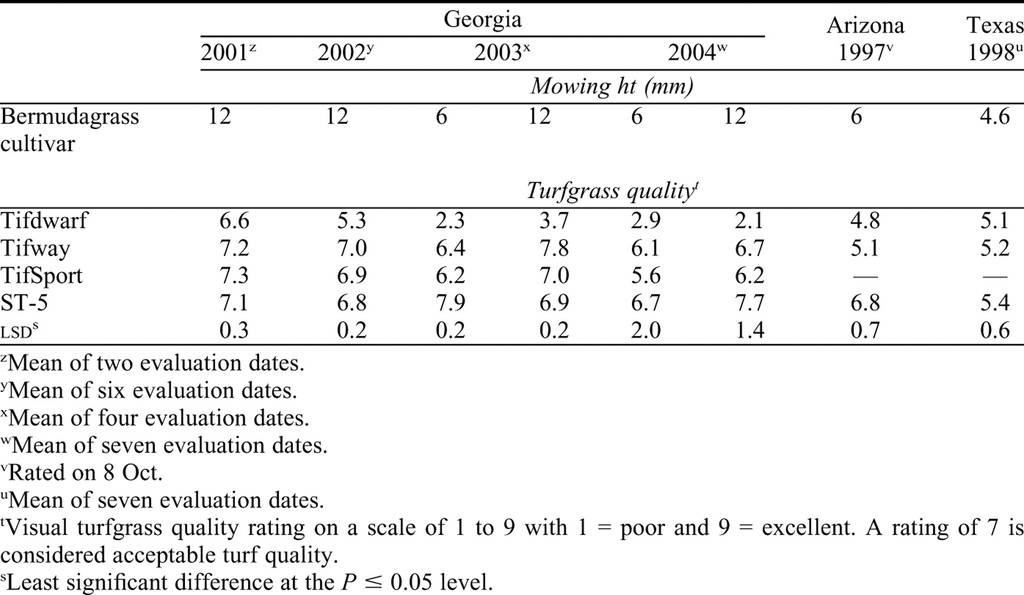 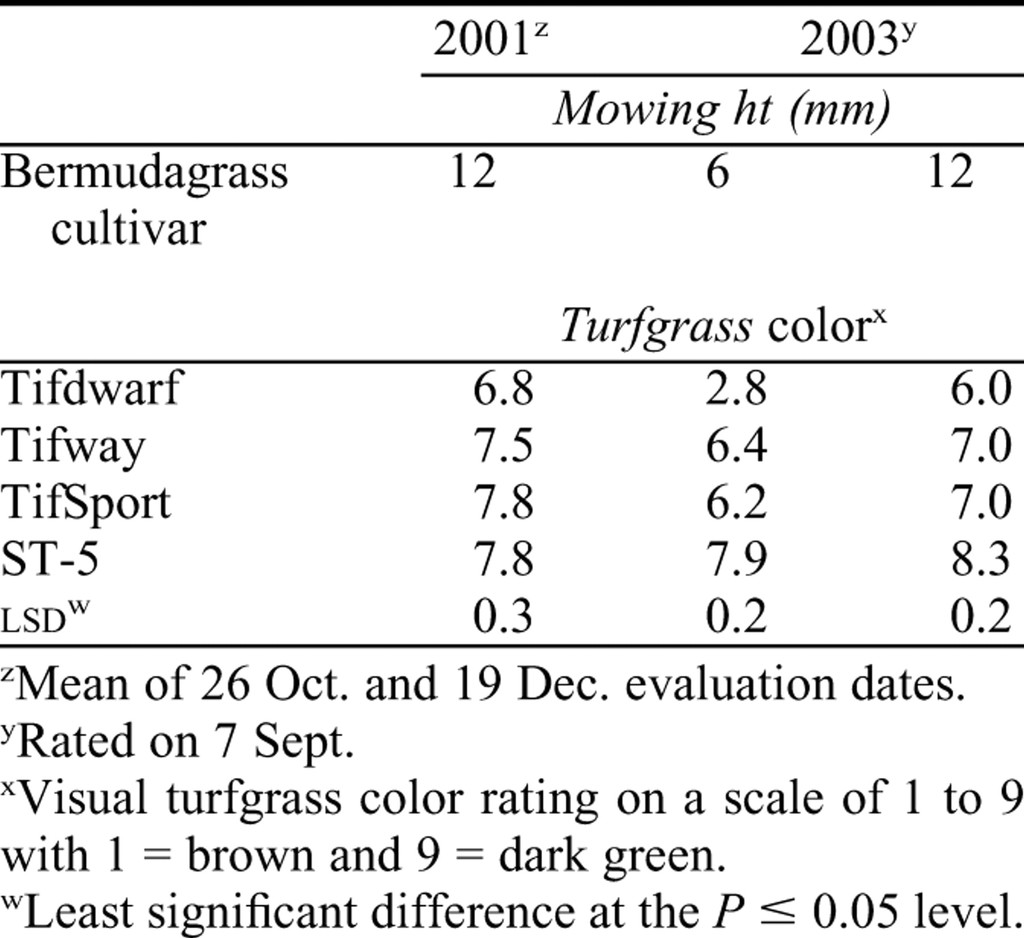 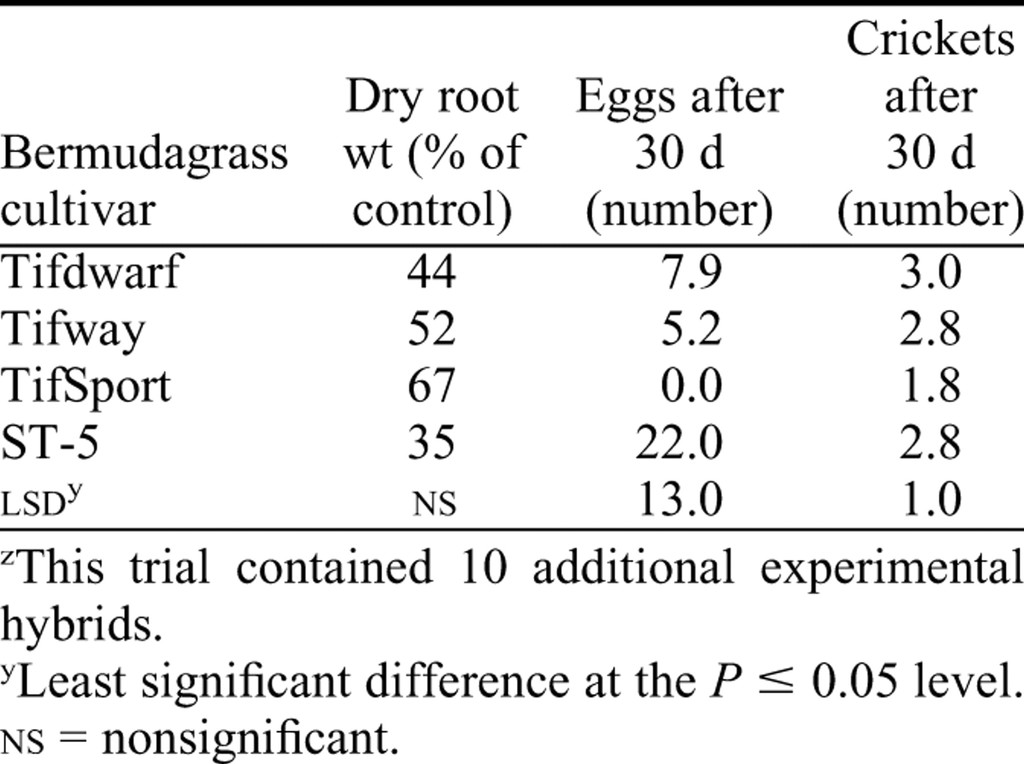 Mean turfgrass response of ‘ST-5’ and bermudagrass cultivars to the bermudagrass mite (Eriophyes cynodoniensis) as evaluated in no-choice experiments. 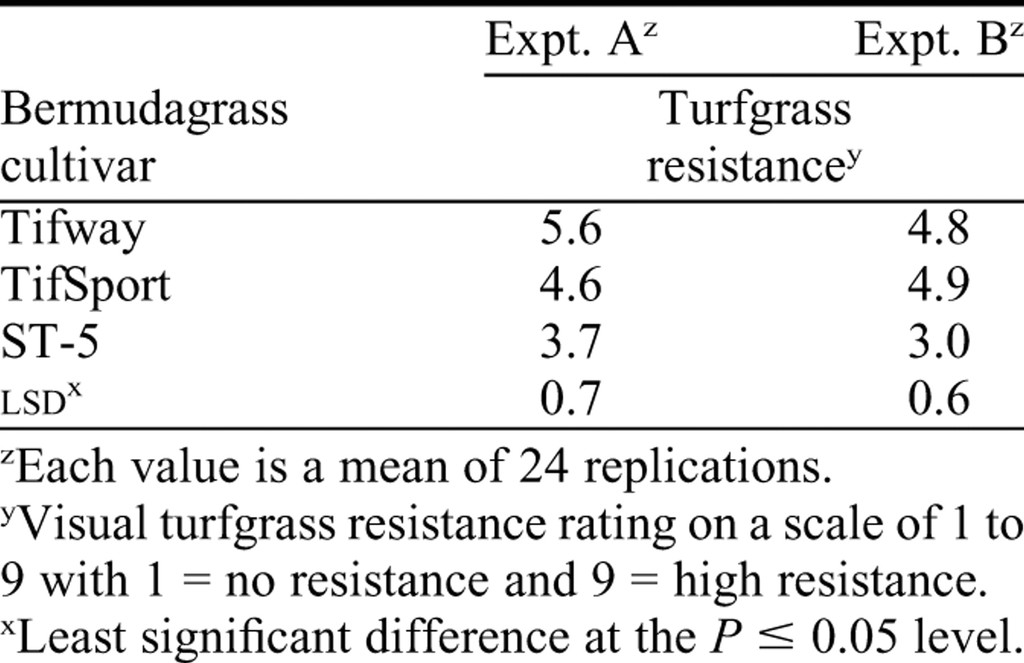 ‘ST-5’ can be vegetatively propagated by sprigs, sod, or plugs using standard equipment in the turf industry. Fertilization requirements are similar to Tifway and TifSport. Clipping removal is recommended when ‘ST-5’ is grown in full sun to reduce thatch development. The ‘ST-5’ genotype appears to be stable and has maintained morphological uniformity. No seed or pollen is produced by ‘ST-5’, so the cultivar basically stays where you plant it. ‘ST-5’ is recommended for lawns, tees, fairways, roughs, and other landscapes where sunlight is reduced up to 70%.

A U.S. Plant Patent for ‘ST-5’ has been applied for on behalf of the University of Georgia. Breeder planting material is maintained in the breeder nursery at Tifton, GA. As a patented cultivar, ‘ST-5’ can only be produced by licensed growers under guidelines established by the University of Georgia Research Foundation in conjunction with the Georgia Seed Development Commission. Contact the GSDC (http://www.gsdc.com) for information on availability.