Pedigree of melon vine decline (MVD)-tolerant lines. Each cross step was followed by a selection for root architecture and resistance to MVD; a 5% to 10% selection pressure was applied.

Intensity of the netting of the lines in the field trials.

Root evaluation of melon vine decline-tolerant breeding lines grown for 90 d in 18-L pots filled with naturally infested soil. The ‘Piel de Sapo’ original line and the ‘Pat 81’ donor of the tolerance were included as controls. DSI = disease severity index (as an average of the disease index in hypocotyls, lateral roots, and fine roots, ranging from 0 = healthy roots to 4 = totally necrotic roots). 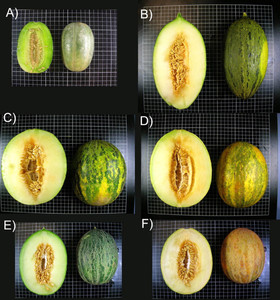 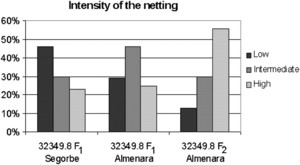 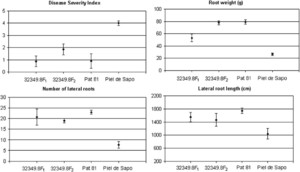