Pothos plants do not flower under greenhouse or interior environments and flowering is seldom reported even within native habitats. As a result, no pothos hybrids are known to exist. As a result of the difficulty in flowering and hybridization and because of the commercial importance of this ornamental crop, we initiated a program at the Mid-Florida Research and Education Center (MREC) in Apopka, FL, to induce mutations from available pothos cultivars. Pothos ‘Green Genie’ is a selection from that program. Pothos ‘Green Genie’ is a mutation selected from Pothos ‘Marble Queen’ plants that had been irradiated a single time with 6.5 gray of gamma rays from a Cesium 137 source that emitted 9.18 gray/minute. Nine months after irradiation, a single uniform stem mutation was discovered on one treated plant. The mutant was removed from the mother plant and asexually increased by tip and single-node cuttings for 1 year to produce sufficient numbers of stock plants. During this process, it was determined that the unique growth habit and foliar characteristics of Pothos ‘Green Genie’ were stable and made this plant suitable for introduction as a new cultivar.

Pothos ‘Green Genie’ has a smaller overall size compared with the original Marble Queen cultivar. Mature leaves from ‘Green Genie’ reach an average of 7 to 9 cm long and 4.8 to 5.8 cm wide compared with 10 to 12 cm × 8 to10-cm leaves on ‘Marble Queen’. Pothos ‘Green Genie’ leaves are shiny and coloration is uniform deep green [RHS 139A; Royal Horticultural Society (RHS), 1995]. Undersides of the leaves are a lighter green (RHS 137C). The stem or vine color is dark green (RHS 139A) on the upper side (the side exposed to light) but gradually fades to a lighter green (RHS 137C) on the underside. Petiole color is also green (RHS 137C) in the center but the outer 1- to 2-mm edges are white (RHS 155A). The white coloration in the petiole wings is present on the four to five newest leaves on each vine tip. As leaves mature, the white outer colored wing bands turn brown (RHS 200C). The white edge is unique to this new cultivar. Internode length varies from 4 to 6 cm along the vine (Fig. 1). Overall, ‘Green Genie’ has a sturdier and thicker appearance compared with the parent plant, ‘Marble Queen’.

Two growth studies were conducted using cuttings that were harvested from Pothos ‘Green Genie’ stock plants maintained in a shaded greenhouse at MREC Apopka. In April 2006, tip cuttings (3 to 4 cm in length and displaying one to two expanded leaves) were taken and stuck 12 per 1.6-L pot containing Fafard #2 Mix (Conrad Fafard, Inc., Agawam, MA; 55% Canadian peat:25%:perlite:20% vermiculite). Thirty pots of tip cuttings were stuck. One month later, single eye cuttings (a stem section consisting of one eye with one expanded leaf attached) were harvested from the stock plants and stuck 12 per 1.6-L pots also containing Fafard #2 medium. Thirty pots of eye cuttings were stuck. All cuttings were rooted in a plastic tent without intermittent mist or fog to maintain high humidity (maximum irradiance of 80 μmol·m−2·s−1) in a shaded greenhouse (maximum irradiance of 125 μmol·m−2·s−1) and under natural photoperiod within a temperature range of 15 to 34 °C. In each test, the cuttings were rooted and removed from the propagation chamber after 10 weeks. The original 1.6-L pots containing the 12 rooted cuttings were set on raised benches in the shaded greenhouse under natural photoperiod and temperature range as described previously. Treatments consisted of Peter's liquid fertilizer 20N–8.8P–16.6K (Scotts-Sierra Horticultural Products Company, Marysville, OH) at 100, 200, or 300 ppm applied once per week. The fertilizer treatments were applied as a 200-mL liquid drench per pot once weekly throughout the duration of the experiments. Plants were placed in a completely randomized experimental design and hand-watered as needed. Data recorded after 12 weeks of growth included length of longest vine, number of leaves, length and width of largest leaf, and a visual quality rating in which 1 = dead, 2 = fair, 3 = acceptable (saleable quality), 4 = good, and 5 = excellent quality. Data were analyzed using the analysis of variance procedures of SAS (SAS Institute Inc., Cary, NC). Parameters with means showing significant differences were subjected to regression analysis.

Pothos ‘Green Genie’ is intended for commercial producers growing finished ornamental tropical foliage plants. Trademark and Plant Patent Rights issued through the U.S. Patent and Trademark Office will be assigned to the University of Florida, Board of Trustees. Stock plants will be released to licensed Florida growers for propagation and distribution. Inquiries regarding licensing may be sent to Florida Foundation Seed Producers, Inc., P.O. Box 110200, Gainesville, FL 32611. Plants for research purposes may be obtained directly from the author.

A 1-year-old plant of Epipremnum aureum ‘Green Genie’ grown on a totem pole in a 3.9-L pot. 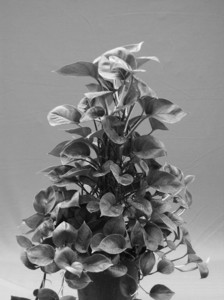