There is a need for a strawberry (Fragaria ×ananassa Duch.) cultivar to complement ‘Strawberry Festival’ (Chandler et al., 2000) yields, currently the primary cultivar in Florida and an important cultivar in other winter and early spring production areas around the world. ‘Strawberry Festival’ has become a grower favorite because it is a sturdy upright plant that is easy to harvest with relatively well-distributed yield throughout the season and produces very few nonmarketable fruit. It has become a supermarket favorite because its fruit are attractive, fit well in 450-g clamshell containers, and have a long shelf life. However, early in the season (late November and early December in west central Florida), ‘Strawberry Festival’ produces relatively low yields, and during the second half of the main production period (starting in late February in west central Florida), it tends to produce fruit of marginal size. ‘Florida Radiance’ strawberry has produced high early-season yields and has maintained good fruit size throughout the main production period in plots at the former University of Florida research center at Dover and on several commercial farms in west central Florida and southwest Spain. It is recommended for trial in areas with mild winter climates. This strawberry genotype is named ‘Florida Radiance’ because of the attractive luster of its fruit.

‘Florida Radiance’ originated from a 2001 cross between ‘Winter Dawn’ and ‘FL 99-35’ (Fig. 1). ‘Winter Dawn’, a 2005 release from the Florida Agricultural Experiment Station of the University of Florida, was used as a parent because of its high early-season yield potential and ability to produce large primary and secondary fruit. ‘FL 99-35’ was used as a parent because of its ability to produce firm, attractive fruit. Based on the desirable appearance and firmness of ‘Florida Radiance’ fruit during the 2001–2002 season, it was included (as ‘FL 01-116’) in randomized complete block trials at Dover, FL, during the 2003–2004 and 2004–2005 seasons. The soil at the experimental site is classified as a Myakka fine sand siliceous hyperthermic Oxyaquic Alorthod. The organic matter content and the soil pH of the experimental site were less than 1.5% and 7.3, respectively. Planting beds were 27 inches wide at the base, 24 inches wide at the top, 10 inches high, and spaced 4 feet apart on centers. Finished beds were fumigated with methyl bromide plus chloropicrin (67:33 v/v) at a rate of 350 lb/acre to eliminate soilborne diseases, nematodes, and weeds in the soil. Simultaneously, beds were covered with black high-density polyethylene mulch (1 mil thick), and a single line of drip irrigation tubing (25 gal/acre per min; T-Tape Systems International, San Diego, CA) was buried 1 inch deep on bed centers. Plant nutrients were supplied to the crop under nonlimiting conditions through the drip lines and pest management followed current statewide recommendations (Peres et al., 2006).

Fruit were harvested twice per week starting on the third week in December of each season. A marketable fruit was defined as a fruit without visible blemishes and with at least 75% of red skin. For postharvest quality analysis, fresh fruit was transported to the Citrus and Subtropical Products Laboratory, Agricultural Research Station, U.S. Department of Agriculture in Winter Haven, FL, once each month during the 2007–2008 harvest season. An additional sensory panel and quantitative analysis was performed in Feb. 2008 at the Food Science and Human Nutrition Department, University of Florida, in Gainesville, FL (data not shown). Fruit were analyzed for surface color using a colorimeter (Chromameter CR-400; Konica Minolta, Inc., Osaka, Japan), where the L value is a measure of lightness with 0 = black and 100 = white. Fruit firmness was measured using a penetrometer (Instron 4411, Canton, MA) and it was expressed as the force needed to penetrate the fruit to a depth of 10 mm with a 5-mm diameter probe. These measurements were taken as the average of eight fruit per treatment. Soluble solids were measured by placing a drop of pure fruit juice on the Abbe Mark II digital refractometer (Misco Refractometer, Cleveland, OH). Extracted fruit juice was used to measure titratable acidity, calculated as citric acid, with Titrino 719 S (Metrohm USA, Westbury, NY). The ratings of 100 untrained panelists were collected for fruit for appearance, color, firmness, flavor, and sweetness. These characteristics were rated on a 1 to 9 hedonic scale with 1 = dislike extremely, 5 = neither like nor dislike, and 9 = like extremely.

Performance of strawberry cultivars at Dover, FL, during the 2003–2004 season.z

Performance of strawberry cultivars at Dover, FL, during the 2004–2005 season.z

‘Florida Radiance’ is moderately resistant to the two most serious disease problems on strawberry in Florida: Botrytis fruit rot [caused by Botrytis cinerea (de Bary) Whetzel] and anthracnose fruit rot (caused by Colletotrichum acutatum Simm.). In a fungicide-free study during the 2007–2008 season, only 3% of the ‘Florida Radiance’ fruit harvested from mid-February to mid-March showed symptoms of anthracnose fruit rot compared with 53% for ‘Treasure’, the susceptible control (N. Peres, unpublished data). However, ‘Florida Radiance’ is susceptible to crown rots (C.K. Chandler, personal observations), which are most likely caused by C. gloeosporioides (Penz.) Penz. and Sacc. and Phytophthora spp.

Information on nurseries licensed to propagate ‘Florida Radiance’ can be obtained from the Florida Foundation Seed Producers, Inc. (http://ffsp.net). 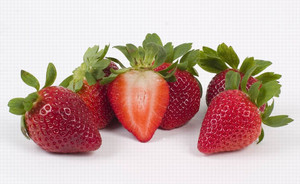