Most growing media have a more or less pronounced hydrophobic character in relation to their moisture level (Michel et al., 2001). To remedy this, the addition of mineral materials or wetting agents has been proposed. However, the influence of these additives is often evaluated in terms of their effects on physical properties such as water-holding or air-filled capacity (Bunt, 1983; Martinez et al., 1997) or indirectly during the growing (Rivière et al., 1995) and rarely in terms of water repellency or hydrophobicity. Furthermore, the effects of theses additives on the relationship between water repellency and water content have never been investigated.

Water repellency (or wettability) of a material is defined by the ability of a liquid to spread on a solid surface and is then classically characterized by measuring the contact angle of a drop of liquid on the surface of the material (Letey et al., 1962) (Fig. 1). However, this method of measurement requires a smooth surface and, in the case of porous materials such as growing media, it thus requires the material to be compacted. As a consequence, this technique can only be used on dried materials (Jouany et al., 1992). However, the development of a methodology already described by Michel et al. (2001) and based on the capillary rise principle now allows us to characterize the wettability of porous materials in relation to their water content. The change in contact angles from the hydrophilic to the hydrophobic character of peat samples during desiccation and the decrease in wettability related to the degree of peat decomposition have already been shown using this method (Michel et al., 2001). Both methods of contact angle measurements were coupled to the qualitative water drop penetration time (WDPT) test (McGhie and Posner, 1980), most often used to estimate water repellency of reconstituted soils (Dekker and Ritsema, 1994, 2000; Dekker et al., 2000; Doerr, 1998; Letey, 1969; McKissock et al., 2000).

On the basis of these studies, we questioned the efficiency of clay addition to improve the wettability of organic growing media. Clay and more or less decomposed peats were chosen as models because of the ability of peats to become hydrophobic during desiccation and because of the lack of studies concerning the direct effect of clay addition on water repellency in growing media compared with wetting agents. The objective was then to determine whether the incorporation of additives in growing media leads not only to a change in water retention characteristics resulting from solid phase reorganization, but to a change in wettability as well, improving the ability and speed of the growing medium to rewet.

A weakly and a highly decomposed Sphagnum peat from Germany was chosen as a model to understand the influence of the degree of decomposition. These peat samples were selected for their similar particle size (fine fractions 0–4 mm) and their very low ash content (less than 2%). Clay was conditioned in the form of powder and has a varied mineralogical composition, including a prevalence of smectite (65%), but also illite (25%), kaolinite (8%), and quartz (2%). Mixtures were made in the wet state with a peat:clay ratio of 90:10 (by vol.).

Because the physical properties of growing media are largely influenced by how the materials are packed, the materials were prepared following the European standardized procedure NF EN 13041 (2000). Two large polyvinyl chloride (PVC) cylinders (diameter: 14 cm; height: 14 cm) were manually filled with substrates, slowly wetted (30 min) from the bottom, saturated for 24 h, and then allowed to equilibrate to a water potential of –3.16 kPa during 48 h. Cylinders were emptied, materials homogenized, and other small PVC cylinders (diameter: 10 cm; height: 5 cm; V = 393 cm3) were filled with each mixture without packing and slowly rewetted from the bottom for 24 h. Four replications of each substrate were used in this experiment.

Water retention properties were determined using classical hydrostatic methods. For each of the four replicates, small cylinders were first placed on a tension table to drain the materials from –1 kPa to –10 kPa. Suction levels between –31.6 kPa and –316 kPa were obtained by using a high-pressure chamber, whereas the suction level at –100 MPa was obtained from air-dried materials.

The assessment of contact angles related to the water content required the use of complementary methods (capillary rise and droplet methods) as a result of their respective methodological limitations previously and widely described by Michel et al. (2001).

Contact angles on more or less wetted samples of peats and mixes were measured by the capillary rise method described by Michel et al. (2001). This method consisted of following the capillary rise on a column of materials with different liquids by using a Krüss Processor Tensiometer K12® linked to a computer (Fig. 2). The speed of capillary rise, translated by the increase in weight of the sample, is measured in relation to time by the computer. The contact angle was determined from Washburn's (1921) equation, which defines the flow of a liquid through a capillary:

where l represents the height of the wetting front (cm), t is the time (s), η, γL are the viscosity (mPas) and the surface tension of the liquid (mJ·m−2), respectively, r represents the radius of the capillary (cm), and θ is the contact angle (°).
The powder that has been packed in a tube can be described as a bundle of capillaries with a mean radius of The Washburn equation then becomes:

where τ represents a constant to approximate the tortuosity of the capillaries.
By replacing the height of the wetting front l by the increase in weight m resulting from the penetration of the liquid through a bundle of n capillaries, the Washburn equation becomes

where m is the mass of the adsorbed liquid (g), ρ is the density of the liquid (g·cm−3), and n is the number of capillaries. The term c (cm5) corresponds to an empirical constant of the porosity and tortuosity of the capillaries, which depends on particle size and degree of packing.

This experiment was carried out on a small quantity of materials extracted from cylinders used for physical measurements and fixed at various water potentials (–32 kPa, –100 kPa, and –100 MPa). The parameter c was initially assessed by using a liquid with a very low surface tension (i.e., hexane), which completely wets the sample (θ = 0). The water/material contact angles could then be calculated and the wettability estimated knowing that the greater the contact angle, the more the hydrophilicity decreases or the hydrophobicity increases.

However, when the material is too hydrophobic (contact angles greater than 90°), there is no capillary rise, and the degree of hydrophobicity can then not be estimated using this technique. The droplet method, widely used in soil science and based on the direct contact angle measurement of a drop of water on a solid surface, is then used (Fig. 1). However, this requires a smooth surface and, in the case of our materials, measuring them on compacted and air-dried materials (–100 MPa).

Wettability was also monitored by using the WDPT test, which is commonly used by soil scientists, to compare results from WDPT tests with those from contact angle measurements.

This WDPT test was carried out on a small quantity of samples (peats and mixtures) at a water potential equal to –100 kPa by the centrifugation method (Michel et al., 2001) making it possible to obtain a material in the form of a galette with low rugosity (i.e., relatively smooth surface) and with a higher homogeneity in water content compared with cylinders used for physical properties. The materials were then progressively dried at 40 °C until completely dry, and WDPT measurements were carried out every ≈2 hours. For each measurement, water content was previously measured; then 10 to 15 drops of distilled water (10 μL each) were deposited on the material using a syringe. Water repellency was then assessed using the classification presented by Dekker et al. (2000) (Table 1).

Water retention curves obtained on both of the pure peats are in agreement with results generally obtained on these types of materials (Fig. 3). Clay addition does not result in a major change in the water retention curves for both growing media, especially for weakly decomposed peat, whereas the water contents obtained are systematically slightly lower for highly decomposed peat after clay addition. This discrepancy (slight or no effect of clay addition) with the literature (Bunt, 1983; Martinez et al., 1997; Michel, 1998) can be explained by the fine particle size distribution of the peat samples used, which notably limits the decrease in water contents at high suction levels (from –10 kPa to –316 kPa) for pure peats as compared with mixtures.

Regardless of the growing media (with or without clay), a first analysis shows an increase in contact angles related to the degree of desiccation, in agreement with previous results (Michel et al., 2001) (Table 2). Desiccation of both peats led to a change from a hydrophilic character at higher water potentials (–32 kPa and –100 kPa) to a hydrophobic character when the peat was air-dried (corresponding to a water potential equal to –100 MPa). Variations according to the degree of decomposition were also observed for the pure peat-growing media with an increase in contact angles for highly decomposed peat.

The peat:clay mixtures also showed an increase in contact angle during desiccation with the same trends in the increase of contact angles related to the degree of decomposition. However, significant differences could be observed in relation to clay addition. For weakly as well as for highly decomposed peats, clay addition did not reveal significant differences in contact angles at higher water potentials, but subsequently led to a progressive decrease in contact angles for drier materials, which is all the more important with the degree of desiccation. This leads to a hydrophilic air-dried mixture in comparison with the hydrophobic pure peat. The results allowed us to conclude that the addition of clay seems to have a positive effect on the wettability of peat-growing media in the driest conditions, whereas no effect was observed for more wetted materials.

In general, clay incorporation in peat leads to a change in physical properties. However, this effect is more or less pronounced depending on the proportion of clay in the mixture and on the growing media tested and especially its particle size. In the case of our experiments, clay addition has little or no effect on the water retention properties of both of the growing media used and can be especially linked to the very fine fraction of peats tested, notably by limiting the decrease in water contents at high suction levels for pure peats in comparison with mixtures.

Although no significant change is revealed in terms of water retention with or without clay, wettability measurements, on the contrary, clearly showed large modifications in relatively dry conditions. In fact, clay addition does not affect wettability when the materials are wetted and hydrophilic, but contributes to its increase in the driest conditions when they present a more or less pronounced hydrophobic character. In summary, we can conclude that clay can be characterized by its ability to improve the wettability of growing media with a hydrophobic character, thus improving the ability and speed of the growing media to rewet. 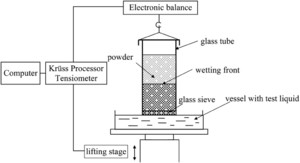 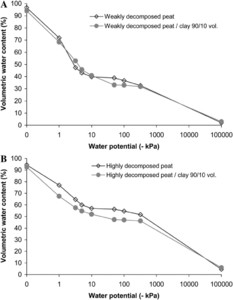 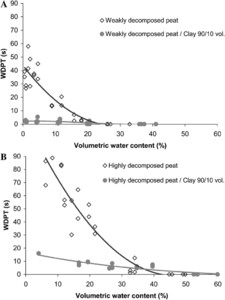