We have previously reported that canola sprouts, on an average, contained 27.3% oil, 25.1% protein, and 10.8% crude fiber on a dry weight basis (Bhardwaj and Hamama, 2007) and 0.98, 1.23, 427, 0.57, 8.8, 430, 312, 4.54, 15, 607, 573, and 4.89 mg/100 g of aluminum, boron, calcium, copper, iron, potassium, magnesium, manganese, sodium, phosphorus, sulfur, and zinc, respectively (Bhardwaj and Hamama, 2009). In addition, contents of various minerals in canola sprouts were observed to be superior to those in sprouts of alfalfa, brussels sprout, mungbean, and radish based on literature values for these crops. Given that there is a lack of fatty acid profile of canola sprouts in the literature, we are now reporting the contents of various fatty acids in these sprouts.

The term “Canola” is a registered trademark of Canadian Canola Association and refers to cultivars of oilseed rapeseed (Brassica napus L. and B. rapa L.) that produce seed oils with less than 2% erucic acid (C22:1 fatty acid) and meals with less than 30 μmol of aliphatic glucosinolates per gram (Raymer, 2001). Current canola cultivars are essentially free of erucic acid and glucosinolatres. Demand for canola oil is increasing for human consumption as a result of its lowest content of saturated fatty acids (5% to 8%) and moderate content of polyunsaturated fatty acids (PUFA).

The objectives of this study were to ascertain affects of cultivars and growing locations on contents of various fatty acids in canola sprouts. In addition, we also evaluated the ratio of omega-6 to omega-3 fatty acids [linoleic (C18:2) versus linolenic (C18:3) fatty acids] in canola sprouts resulting from considerable importance of this ratio in human nutrition.

Canola seeds (20 g), from replications one and two of the original field trial, were sprouted for 6 d in a wide-mouth jar (9 cm × 9 cm × 16 cm) covered with a mesh screen top to ensure sufficient air ventilation under laboratory conditions (22 °C temperature and 98% relative humidity and room lighting, 375 lx for 10 h). After initial hydration (seeds were first soaked in water at room temperature overnight), seeds were kept moist by rinsing and draining twice a day and the jars inverted at a slight angle until the next rinse (after 8 to 10 h). At the end of sprouting, the fresh weights were recorded and expressed as fresh yield in grams. The sprouts were then dried at 65 °C until constant weight was reached.

The oil was extracted from 1 g of ground sprouts at room temperature by homogenization (Dahmer et al., 1989) for 2 min in 10 mL hexane/isopropanol (3:2, v/v) with a Biospec Model 985-370 Tissue Homogenizer (Biospec Products, Inc. Racine, WI) and centrifuged at 4000 g for 5 min as described by Bhardwaj and Hamama (2000). The oil extraction was repeated three times for each sample to ensure full oil recovery and the three extractions were combined. The hexane–lipid layer was washed and separated from the combined extract by shaking and centrifugation with 10 mL of 1% CaCl2 and 1% NaCl in 50% methanol. The washing procedure was repeated and the purified lipid layer was removed by aspiration and dried over anhydrous Na2SO4. The oil content (g/100 g dry basis) was determined gravimetrically after drying under vacuum at 40 °C and stored under nitrogen at –10 °C until analysis.

Fatty acid methyl esters (FAME) were prepared by an acid-catalyzed transestrification method as described by Bhardwaj and Hamama (2000) and Dahmer et al. (1989). The oil samples (5 mg) were vortexed with 2 mL sulfuric acid/methanol (1:99, v/v) in 10-mL glass vials containing a Teflon boiling chip. The open vials were placed in a heating block at 90 °C until the sample volume was reduced to 0.5 mL. After cooling to room temperature, 1 mL of hexane followed by 1 mL of distilled water was added. The mixture was vortexed and the upper hexane layer containing the FAME was taken and dried over anhydrous Na2SO4. The hexane phase containing FAME was transferred to a suitable vial and kept under N2 at 0 °C for gas chromatographic analysis.

Analyses of FAME were carried out as described by Bhardwaj and Hamama (2003) using a SupelcoWax 10 capillary column (25 m × 0.25 mm i.d. and 0.25 μm film thickness; SupelcoWax, Inc., Bellefonte, PA) in a Varian model Vista 6000 gas chromatograph equipped with a flame ionization detector (Varian, Sugar Land, TX). An SP-4290 Integrator (Spectra Physics, San Jose, CA) was used to determine relative concentrations of the detected fatty acids. Peaks were identified by reference to the retention of FAME standards and quantified by the aid of heptadecanoic acid (17:0) as an internal standard. The concentration of each fatty acid was calculated as a percentage (w/w) of the total fatty acids.

All data were analyzed by analysis of variance procedures (PROC GLM) in version 6.11 of SAS (SAS, 1996). Fisher's protected least significant difference test was used for mean separation with a significance level of 5%. The oil content and fatty acid composition of canola sprouts was compared with the values for alfalfa, brussels sprouts, mungbean, and radish sprouts reported in Nutrient Database for Standard Reference, Release 14, USDA-ARS Nutrient Data Laboratory (http://www.nal.usda.gov/fnic/foodcomp/).

Because germination is known to enhance series of metabolic and compositional changes in seeds, mainly to supply energy and structural components for growth of new cells (Huang and Grunwald, 1990; Zimmerman, 1971), it has the potential of improving the nutritional quality of grains (Andarwulan et al., 1999; Balasaraswathi and Sadasivam, 1997; Chung et al., 1989).

Partial analysis of variance (mean squares) for composition of sproutsz produced from seed of four canola cultivars grown at three locations in Virginia during 2001–2002 and 2002–2003 crop seasons. 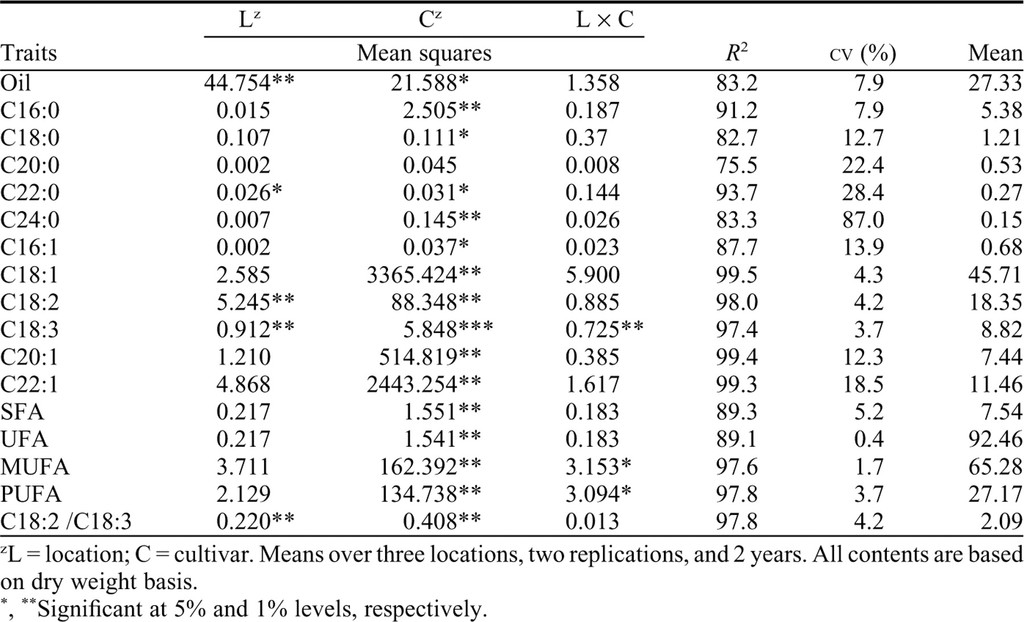 The four canola cultivars differed for all traits under study except for the content of C20:0 fatty acid in sprouts (Table 2). The contents of saturated fatty acids in canola sprouts varied from 7 (KS 8227 cultivar) to 8% (Banjo cultivar). The saturated fatty acid content in sprouts from KS 8227 and KS 8200 cultivars were similar, both being significantly lower than sprouts from ‘Banjo’. Monounsaturated fatty acid (MUFA) contents, among four cultivars, varied from 62% to 70%, whereas PUFA contents varied from 23% to 30%. The highest content of PUFA was observed in sprouts made from seeds of the Virginia cultivar, which was similar to the content of that in Banjo cultivar. KS 8200 and KS 8227 cultivars had significantly lower PUFA contents as compared with the other two cultivars. Content of C18:3 fatty acid, a fatty acid desirable for human nutrition, varied from 8% to 10% with ‘Banjo’ ranking number one and ‘Virginia’ ranking number two. It was interesting to note that both KS 8200 and KS 8227 cultivars had considerably higher content of erucic acid (C22:1) in the sprouts (15% and 30% of total fatty acids in the sprouts, respectively), which would exclude use of sprouts from these cultivars for human consumption given that the U.S. Food and Drug Administration has established 2% as the upper limit for erucic acid in total fatty acids in edible oil (Raymer, 2001).

Canola cultivar effects on composition of sprouts produced from seed of four cultivars grown at three locations in Virginia during 2001–2002 and 2002–2003 crop seasons. 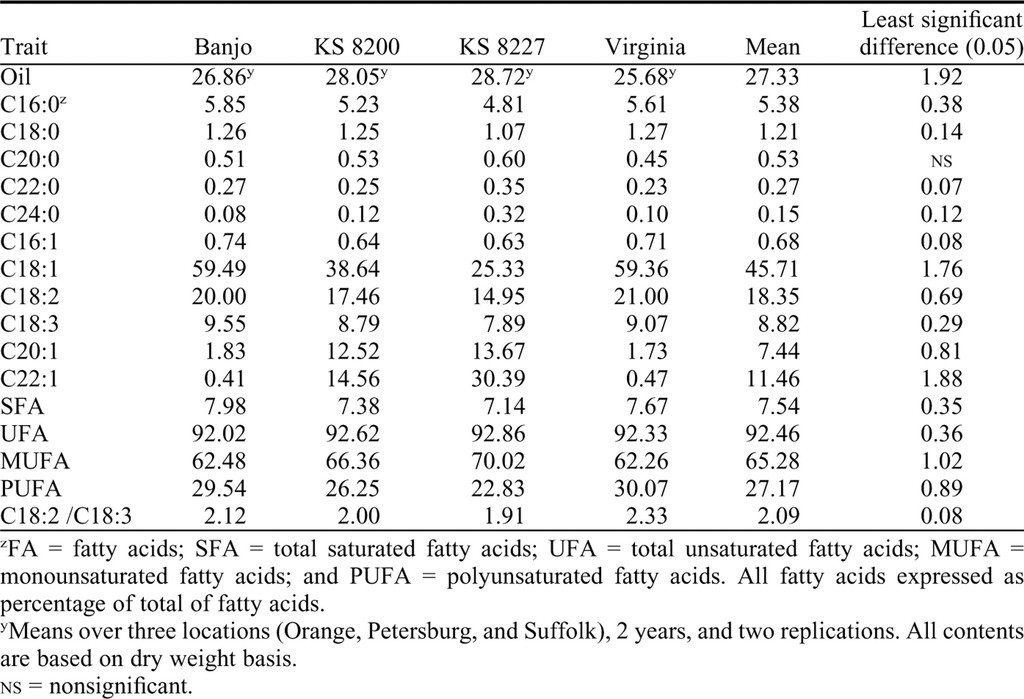 The ratio between C18:2 and C18:3 in canola sprouts averaged 2.09 (Table 2). The ratio of C18:2 to C18:3 in canola sprouts varied from 1.9 to 2.3 for the four cultivars with sprouts of Virginia cultivar exhibiting the highest ratio, which was significantly greater than the ratio for the other three cultivars (Table 2). The ratios from Orange and Petersburg locations (Table 3) were statistically similar (2.16 and 2.15, respectively), which were significantly greater than that from the Suffolk location (1.95). These results, similar to those for C18:2 fatty acid, suggest that a move from a cooler to a warmer growing location for canola production may decrease the ratio between C18:2 and C18:3 fatty acids, which is expected to render canola sprouts healthier for human consumption. Overall mean of the C18:2:C18:3 was 2.09, which is within the range of the recommended ratio of 1:1 to 4:1. Therefore, consumption of canola sprouts is expected to be healthy for human nutrition.

Growing location effects on composition of sprouts produced from seed of four cultivars grown at three locations in Virginia during 2001–2002 and 2002–2003 crop seasons. 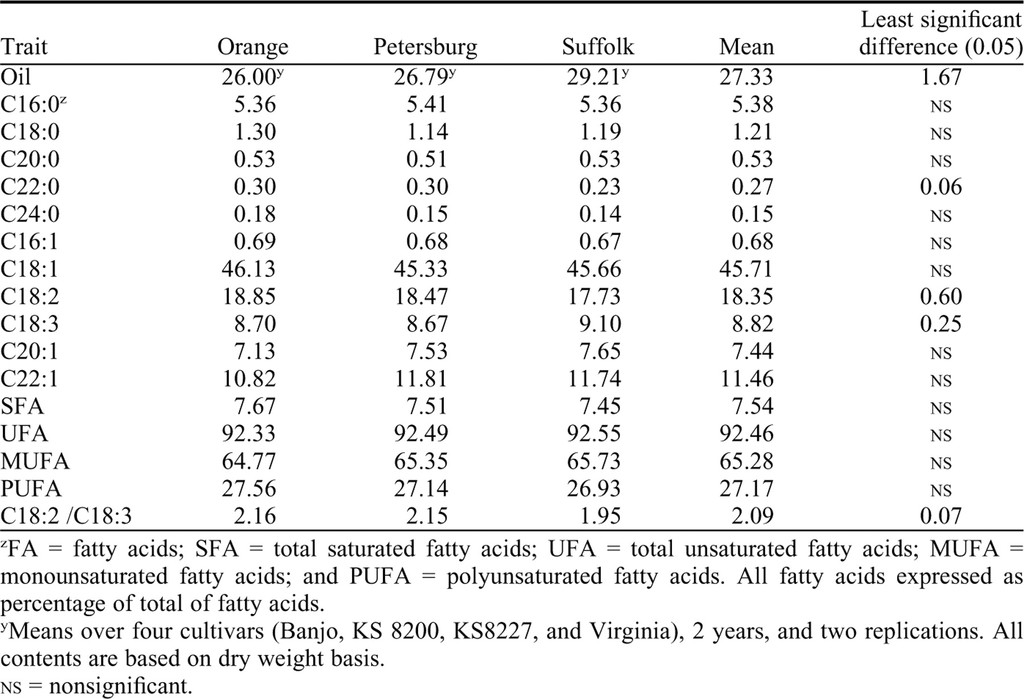 Composition of canola sprouts relative to composition of sprouts of alfalfa, brussels sprout, mungbean, and radish. 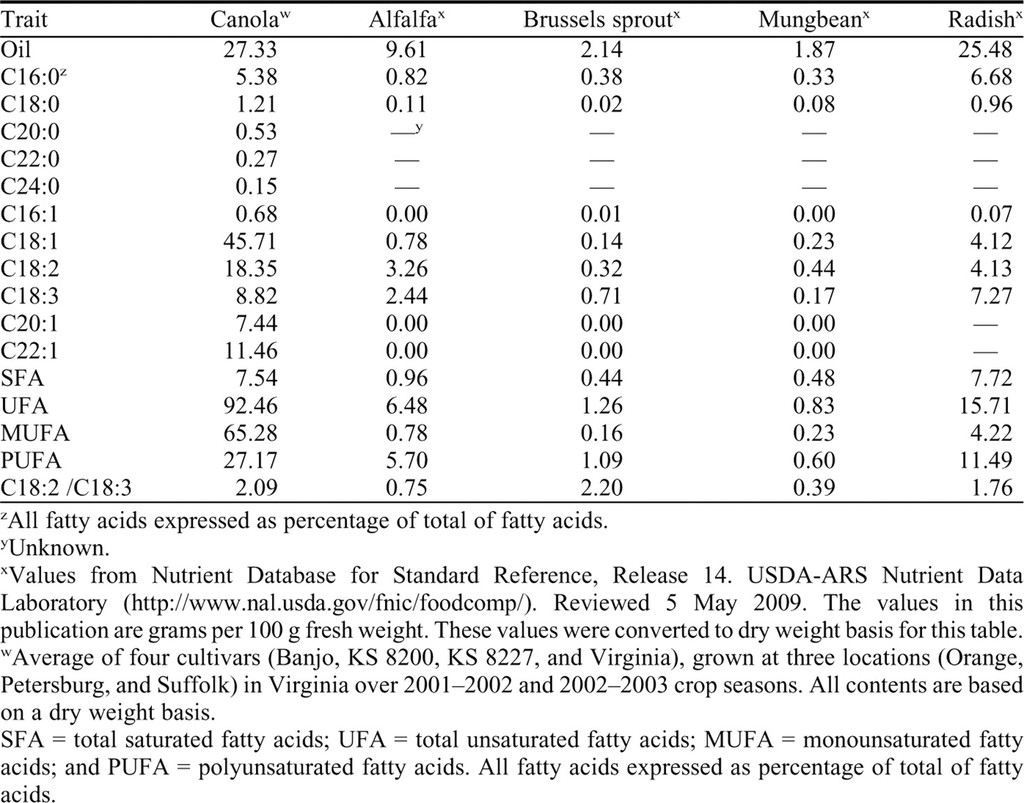 Overall, our results indicate quality of canola sprouts, based on their oil and fatty acid contents, is governed more by the cultivars than the growing location. We also observed that close attention needs to be paid to the canola cultivar used to grow sprouts to ensure that the content of erucic acid in the oil in canola sprouts is less than 2%.