The genus Corylus belongs to the Betulaceae of the order Fagales. The number of species in the genus has varied depending on the authorities due to recognition of some species as a distinct species or a subspecies, or within a certain species (Rehder, 1947; Kasapligil, 1972; Mehlenbacher, 1991; Thompson et al., 1996). The commercially important European hazelnut (Corylus avellana L.) is native to most of Europe, Turkey, and the Caucasus mountains, and wild populations can be found in these areas today. Ayfer et al. (1986) stated that Turkish cultivars are usually spontaneous hybrids of C. avellana × C. maxima, although the latter was suggested as a distinct species (Mehlenbacher, 1991; Thompson et al., 1996). Centuries ago, native wild hazelnut shrubs were growing in close proximity to the mountains near the Black Sea in northern Turkey. It is believed that some Turkish cultivars originated over many centuries from selection within these local wild populations (Ayfer et al., 1986). Ozkurt (1950) hypothesized that hazelnuts were first cultivated in Turkey in Giresun province, and from there its cultivation spread to adjacent Ordu province. Hazelnuts are now grown along the Black Sea coast, where ecological conditions are favorable, and plantings today cover about 400,000 ha (Ayfer et al., 1986). Turkey is the world's leading producer and exporter of hazelnuts (Yavuz and Ercisli, 2006), accounting for about 70% of total production. Other important hazelnut-producing countries are Italy, the United States, Azerbaijan, Iran, Spain, and Georgia (Food and Agricultural Organization of the United Nations, 2007).

Hazelnuts from Turkey are classified based on the shape of the nut and quality of the kernel. The best-quality hazelnuts have a round shape, a high oil content, and superior aroma and taste. In spite of the crop's economic importance, no extensive studies have been conducted on genetic diversity in Turkish hazelnut germplasm. It appears that there are dozens of clones of each Turkish hazelnut cultivar in production, with a common name used for each group. In the past, cultivar identification studies have been based on morphological characters (Ayfer et al., 1986; Caliskan, 1995; Bostan et al., 1997; Erdogan and Mehlenbacher, 1997; Yao and Mehlenbacher, 2000; Koksal, 2002). In recent years, researchers around the globe have investigated genetic relationships among hazelnut cultivars using several types of molecular markers, including randomly amplified polymorphic DNA (RAPD) (Galderisi et al., 1999; Miaja et al., 2001), amplified fragment length polymorphism (AFLP) (Ferrari et al., 2004), and simple sequence repeat (SSR) (Boccacci et al., 2006; 2008; Gokirmak et al., 2009). Palme and Vendramin (2002) used polymerase chain reaction (PCR)-RFLP to look at chloroplast variation in wild hazelnut populations. The objective of this study was to evaluate RAPD, ISSR, and AFLP markers for identifying 18 hazelnut cultivars that are economically important in Turkey.

Eighteen hazelnut cultivars, grown primarily in the Giresun, Ordu, Trabzon, Duzce, and Izmit provinces, were used (Table 1). Leaf samples were collected from the germplasm collection of the Hazelnut Research Institute in Giresun, Turkey. DNA from young leaves was extracted according to the CTAB-based method (Doyle and Doyle, 1987) with minor modifications (Kafkas et al., 2006). The concentration of DNA solution was estimated by comparing band intensity with λ DNA of known concentrations, after 0.8% agarose gel electrophoresis and ethidium bromide staining. DNA was diluted to 5 ng·μL−1 for RAPD and ISSR analysis and to 50 ng·μL−1 for AFLP reactions. 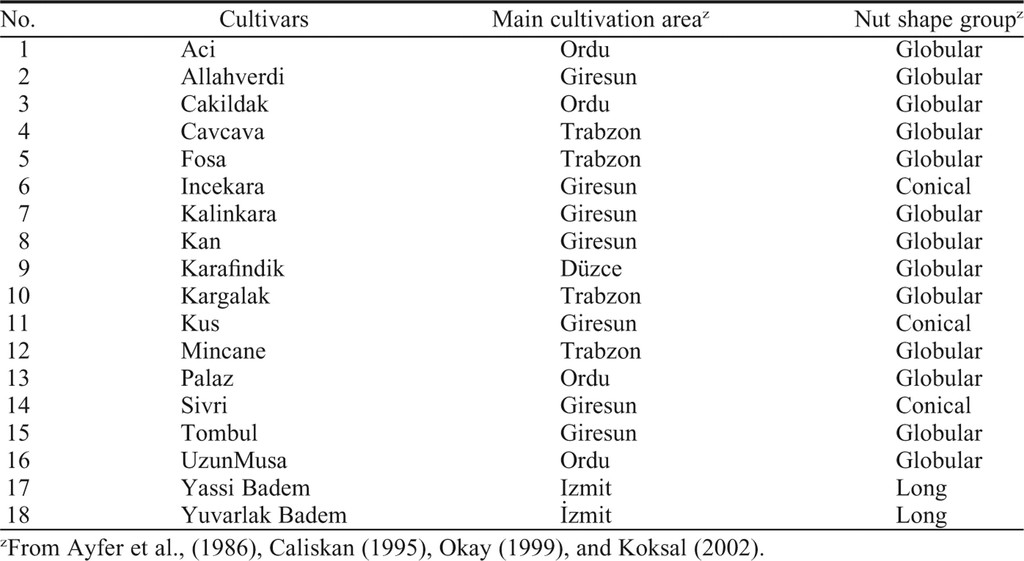 RAPD, ISSR, and AFLP bands were recorded as present (1) or absent (0). Only the most reproducible bands were scored and used for analysis. Scores for all three types of markers, polymorphic and monomorphic, were analyzed using the NTSYSpc 2.11V program (Exeter Software, Setauket, NY) (Rohlf, 2004). Genetic similarities between hazelnut cultivars were calculated using Jaccard's coefficient (Jaccard, 1908). Mantel cophenetic correlation analysis (Mantel, 1967) was used for pairwise correspondence tests of matrices obtained from the three marker systems. Unweighted pair group method with arithmetic average (UPGMA) was performed to construct a dendrogram. The similarity matrix data were also subjected to principal coordinate analysis (PCoA) using the NTSYSpc program. The cultivars were plotted first on three dimensions using the G3D procedure of the Statistical Analysis System (SAS, 1990). The ability of the markers to differentiate the cultivars was assessed by calculating their resolving power (Rp) according to Prevost and Wilkinson (1999) using the formula Rp = ∑ Ib, where Ib = 1 − (2 × | 0.5 − p |), and p is the proportion of the 18 cultivars containing the I band. The polymorphism information content (PIC) of each marker was calculated using PIC = 1 − ∑ Pi2, where Pi is the band frequency of the ith allele (Smith et al., 1997).

Polymorphism and discriminating power of the markers.

In the AFLP analysis, eight AFLP primer combinations revealed a total of 582 fragments, of which 239 (42.9%) were polymorphic. The EAGT/MCAG primer combination generated the highest number of bands (96), while the lowest number (50 bands) was obtained from the EAGA/MCCG primer pair. EAGT/MCTC was the most informative primer pair based on the highest diversity estimates, including a polymorphism rate of 63.5% and a PIC value of 0.784. The average Rp for AFLP markers was 27.50 and total Rp was 220.01. The EAGT/MCAG primer pair had the highest Rp (36.00), while EAGA/MCCC had the lowest (17.67) (data not shown).

Correlations between marker systems based on estimates of genetic similarity.

The Mantel matrix correspondence analysis was performed to compare the genetic similarities obtained according to Jaccard's coefficient. Correlation coefficients for the three markers systems were statistically significant and similar in magnitude: 0.62 for RAPD and ISSR, 0.64 for RAPD and AFLP, and 0.60 for ISSR and AFLP. In a study to characterize genetic diversity in pistachio germplasm, Kafkas et al. (2006) obtained similar values (0.58–0.72) between the same assays. However, the type of genetic polymorphism detected by the three marker systems, the number of primers used, and the plant species may also affect the correlations among the different markers. Several types of molecular markers are available for plant germplasm characterization. Comparisons include cost, speed, reproducibility, and ability to detect polymorphism. This study shows that RAPD, ISSR, and AFLP markers are useful for identification of hazelnut cultivars. ISSR is preferable to RAPD because bands can be scored with greater confidence. ISSR and RAPD protocols are technically simple as opposed to the technically demanding AFLP method. However, AFLP seems to be more powerful than RAPD and ISSR due to the higher number of bands produced.

Genetic similarity values calculated by combining data from three types of molecular markers ranged from 0.73 for the most distant cultivars to 0.96 for the closest ones. The genetic relationships among the 18 cultivars are presented as an UPGMA dendrogram (Fig. 1) and a three-dimensional plot from principal coordinate analysis (Fig. 2). The 18 cultivars were clearly separated from each other. Although the UPGMA dendrogram showed two main clusters, the PCoA figure showed three groups. The cultivars ‘Yuvarlak Badem’ and ‘Yassi Badem’ were separated from the other cultivars in both analyses.

The first group in the UPGMA dendrogram included ‘Tombul’, ‘Sivri’, and ‘Kus’ from Giresun, ‘Mincane’ and ‘Fosa’ from Trabzon, and ‘Karafindik’ from Duzce. ‘Allahverdi’ was the most distant cultivar in the group. The globally significant cultivar ‘Tombul’ was closely related (0.85) to ‘Sivri’ (Fig. 1). Boccacci et al. (2006), using SSR markers, observed similar clustering of ‘Sivri’ and ‘Tombul’. These two cultivars have many phenotypic differences and both are important in Giresun province. Although the names of Turkish cultivars appear to be the same name such as ‘Tombul’ in our study and in Boccacci et al. (2006), the genotypes, in fact, might not be the same. The second pair of closely related cultivars in this group was ‘Mincane’ from Trabzon and ‘Kus’ from Giresun (0.86).

The rest of the cultivars formed the other groups with few cultivars. For example, Group II was comprised of ‘Cavcava’, ‘Acı’, and ‘Kargalak’ cultivars. ‘Kargalak’ is also known as ‘Karidaty’ or ‘Imperial de Trebizonde’ (Boccacci et al., 2006). In this group, ‘Cavcava’ and ‘Aci’ formed a pairwise combination, while ‘Kargalak’ surrounded them at a relatively lower point. ‘Cavcava’ and ‘Aci’ resemble each other in several morphological properties, including a semierect growth habit, green bud color, red style color, and moderately hairy husks, although their growing areas are Trabzon and Ordu provinces, respectively (Caliskan, 1995).

Group III included six cultivars: ‘Cakildak’, ‘Palaz’, ‘UzunMusa’, ‘Kan’, ‘Incekara’, and ‘Kalinkara’. In this group, the highest genetic similarity was found between ‘Kan’ and ‘UzunMusa’. In terms of morphology, this proximity could supposedly have arisen from certain shared features such as nut shape (globular), bud shape (oval), and hair density on the husk (medium), as well as their main cultivation area (Ordu province). ‘Incekara’ and ‘Kalinkara’, both from Giresun, also grouped together (0.90) on the UPGMA dendrogram. In their SSR analysis of several Turkish and foreign hazelnut cultivars, Boccacci et al. (2006) found a close relationship between ‘Kalinkara’ and ‘Incekara’. ‘Yassi Badem’ and ‘Yuvarlak Badem’ are grown in Izmit province, east of the Marmara region, and far from the main growing region. ‘Yassi Badem’ was distant from all the other cultivars (0.77), and ‘Yuvarlak Badem’ was placed between Group I and Group II.

AFLP produced a greater number of specific markers and a higher total number of markers. The EAGA/MCCG AFLP primer combination was the most useful, producing five markers specific to five different hazelnut cultivars (Table 3). EAGT/MCTC and EAGT/MCAG primer pairs were next in terms of usefulness, producing five and four markers, respectively. Such markers should further aid researchers seeking to identify particular cultivars with certain primers. For example, it is very difficult to distinguish the real ‘Tombul’ from its many clones in the Black Sea region of Turkey based solely on morphological traits. Cultivar-specific DNA markers would also provide an additional tool for the identification of hazelnut germplasm of unknown origin.

In conclusion, we employed RAPD markers, ISSR markers, and fluorescent AFLP markers for the assessment of genetic relationships among 18 Turkish hazelnuts cultivars, several of which have great economic importance. Our results may benefit breeders in selecting the most diverse cultivars with favorable characteristics to start crossing and selection programs. 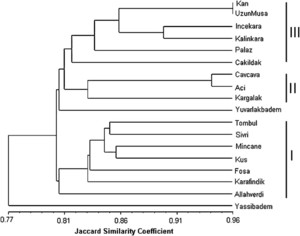 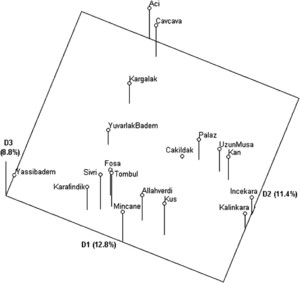 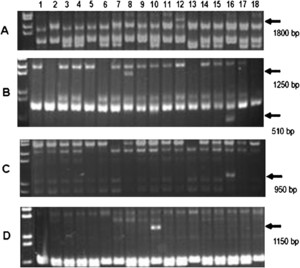