Gaura species (Onagraceae) are native to all three North American countries, extending from British Columbia to southern Mexico (Carr et al., 1990). The center of origin and diversity for the genus is Texas with the highest concentration of species (Anderson et al., 2003; Hoch et al., 1993; Praglowski et al., 1988). Gaura are drought/heat-tolerant annuals and perennials with continuous flowering potential (Anderson and Peters, 2001). Likewise, given the wide range of species throughout North America—particularly polyploids—additional adaptive traits such as tolerance of heat and cold tolerance, extremes in soil pH ranges, and drought are also prevalent in the gaura genome (Anderson et al., 2003).

Gaura lindheimeri Engelm. & Gray, with the common name wandflower, is a nonrhizomatous herbaceous perennial (USDA Zones 5 to 6; Nau, 1999) native to southeastern Texas and southwestern Louisiana. The species is diploid (2n = 2x = 14; Carr et al., 1990) with a gametophytic self incompatibility system (Peters and Anderson, 2006). Wandflower was first introduced in the 1840s and remained on the market for ≈60 years (Raven and Gregory, 1972a, 1972b). It returned to the market in 1994 with the introduction of ‘Siskiyou Pink’, a pink-flowering sport (Pride of Place Plants, 2000). ‘Siskiyou Pink’ is a sport found at Siskiyou Rare Plant Nursery in Medford, OR (Pride of Place Plants, 2000). A ‘Butterflies’ series was subsequently developed out of ‘Siskiyou Pink’ by Howard Bently of Plant Growers Australia: ‘Crimson Butterflies’, ‘Blushing Butterflies’, and ‘Sunny Butterflies’ (Pride of Place Plants, 2000). When grown from seed, G. lindheimeri will flower in the first year (Nau, 1999); only one cultivar is seed-propagated (‘The Bride’). It increased in popularity with most vegetative producer companies marketing individual cultivars or series in their product offerings. Wandflower was ranked in the top 23 perennial plants during 2001 (Behe et al., 2002).

Two gaura, Gaura lindheimeri and G. demareei P.H. Raven & Gregory, are the only bee-pollinated species with flowers opening in the morning (Raven and Gregory, 1972a, 1972b). All other Gaura species are pollinated by noctuids with flowers opening in the evening. Gaura lindheimeri have spicate racemes of delicate, zygomorphic flowers, which may be frost-tolerant, providing season extenders into the fall for northern gardeners (Anderson and Peters, 2001). If grown as an annual, it will flower from July through October from seed in the first year. Some of the earliest and most popular G. lindheimeri cultivars on the market are ‘Siskiyou Pink’ (light pink flowers) and ‘Whirling Butterflies’ (white flowers). The hardiness zones for G. lindheimeri are listed as USDA Zone 5 to Zone 6 (Nau, 1999), although many nurseries and garden centers in Zone 3 and Zone 4 continue to sell these cultivars as perennials despite tests that have proved otherwise (Anderson et al., 2001). In 1999, a Gaura breeding program was established at the University of Minnesota to produce winter-hardy forms with the large flower size of G. lindheimeri. One winter-hardy species, G. coccinea, grows from Canada (Zone 2) to Mexico (Zone 10) (Anderson et al., 2003) and is being used as a source of winterhardiness (Pietsch and Anderson, 2006; Pietsch et al., 2009). Autotetraploid G. lindheimeri have been created (Pietsch and Anderson, 2007) to cross with allotetraploid, Zones 2 to 4 winter-hardy G. coccinea. Gaura ‘Snowstorm’ is the first release from the program.

Gaura ‘Snowstorm’ flowering period in Zone ranges from June to a hard frost (mid- to late October through December), outperforming comparisons such as ‘Dauphine’ and ‘Siskiyou Pink’ (Table 1). Flowers are tolerant of light frosts (–1 to 0 °C/30 to 32 °F); one site reported full recovery of flowering after a heavy frost at –3.6 °C (25.6 °F) (data not shown). Floral displays are prolific throughout the growing season in both high summer and low fall day/night temperatures at all locations—midsummer (Fig. 1) and end of season. Thus, ‘Snowstorm’ is both heat- and cold-tolerant. Heat tolerance and its vigorous growth make ‘Snowstorm’ ideal for containers and in the landscapes, used as a specimen plant or in highway median plantings.

Full sun exposure is the optimum growing condition for ‘Snowstorm’. When grown in partial or complete shade conditions, weak stems may lodge easily in wind/rain storms, stems will be taller, and flowering may not occur. Gaura have deep tap root systems requiring good drainage for stand establishment and performance (Anderson and Peters, 2001).

‘Snowstorm’ was approved for release by the Horticultural Variety Release Committee, Minnesota Agricultural Experiment Station, University of Minnesota in 2007. Rooted or unrooted cuttings of ‘Snowstorm’ are available to growers (wholesale) in North America from Malmborg's, Inc. (http://www.malmborgsinc.com/), a licensed propagator. Royalty administrations ($0.035/cutting) are assessed at the wholesale level and licenses are administered under the auspices of the Minnesota Nursery Research Corporation. Parties interested in licensing, propagating, and distributing ‘Snowstorm’ may contact Mr. Jim Stolzenburg at the Minnesota Nursery Research Corporation (jim.stolzenburg@baileynursery.com). 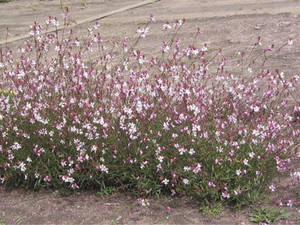