‘Diva’ is the first scab-resistant apple released, specifically for northern climates, for cider and ice cider production and fresh market. It is very winter-hardy (lowest temperature –20 to –35 °C, Zones 4 to 5), has an excellent shelf life compared with ‘Macspur McIntosh’, and produces high-quality cider.

‘Macspur McIntosh’ was used for comparison, in this study, as a result of its use for processing similar to the ‘McIntosh’ in Quebec.

‘Diva’, tested as SJC7123-1, originated from a cross made in 1971 between ‘McIntosh’ and 9AR5T17 (test code PRI 674) (Fig. 1) at Agriculture and Agri-Food Canada (AAFC). The seedling (14179) has been tested since 1974 at AAFC and examined for its hardiness, disease resistance, fruit quality, chemical composition, and shelf life after storage at 2 °C. After extensive testing, it was planted in replicated trials under the name SJC7123-1 at four locations, including Cidrerie du Minot, a commercial cider producer in Hemmingford (lat. 45.05° N, long. 73.60° N), Quebec.

Flowering starts at the same time as ‘Macspur McIntosh’ and 1 d ahead of ‘Spartan’ in L'Acadie, AAFC Experimental Farm (lat. 45.32° N, long. 73.35° W). Flowers are single and their average size is 5.4 cm. In full balloon stage, flower buds are covered with a blush of vivid reddish purple [Horticultural Society Color Chart (RHS) RHS 58A] (RHS, 1995) that gradually becomes solid. When fully opened, petals are mainly ovate, slightly overlapped, and mainly white with various patterns of medium to dark pink (RHS 58A) on the lower side, whereas the pattern is blush on the upper side. The pedicels are mainly green but can sometimes have a red stripe.

Fruit ripe late, during the second week of October, in Frelighsburg, Quebec (lat. 45° N, long. 72° W) ≈3 weeks after ‘McIntosh’ and 1 week after ‘Cortland’. Fruits are medium size and have a transverse diameter between 6.4 and 7.6 cm (Fig. 2) and an average weight of 166 g at harvest. Fruit shape can be round–conic to somewhat oblong. The sides of the fruit are sometimes slightly ribbed along the body and can be a bit lopsided (Fig. 3). Skin is smooth, not waxy and thick. Overcolor of skin is dark red (RHS184A to RHS185A), flushed in some areas, but also has stripes and streaks in other areas, whereas ground color is yellowish green (RHS154D). Surface bloom is almost absent. Lenticels are small to medium size, only slightly conspicuous on the ground color and on striped areas, whereas they are somewhat prominent on areas where the overcolor is flushed. Stem length is equal to or longer than the shoulders. Cavity is acute, fairly narrow and shallow with a low to medium amount of russeting. Basin can be slightly wavy to intermediately crowned, fairly shallow, and its width is medium to somewhat broad. Calyx is persistent, lobes are free at the base, and calyx is opened and medium to large. Seeds are brown and globose–conic. At harvest, the flesh is cream, crispy, juicy, and firm (6.4 to 7.3) with a very high discoloration depending on time after cutting, core line is not distinct, and locules are opened. Flavor is pleasant, sweet, and slightly tart. Titratable acidity (TA) is 0.69% (malic acid), pH is 3.41, and soluble solids content (SSC) is between 12% and 13% (Brix).

The phenolic composition of flesh and peel of ‘Diva’ was evaluated and compared with ‘Macspur McIntosh’ using methods and procedures as described previously (Tsao et al., 2005, 2006) using high-performance liquid chromatography. In the peel of both genotypes, the phenolic composition was similar except for p-coumaroylquinic acid, which was significantly lower in ‘Diva’ (Table 1). In the flesh, ‘Diva’ had a lower p-coumaroylquinic acid content as well as a lower level of procyanidin, especially procyanidin B1 (Table 2). The levels of these phenolics might affect the final cider quality as explained previously (Khanizadeh et al., 2007, 2008) and is worth further investigation along with their effect on disease susceptibility (Ehsani-Moghaddam et al., 2008; Tao et al., 2008). 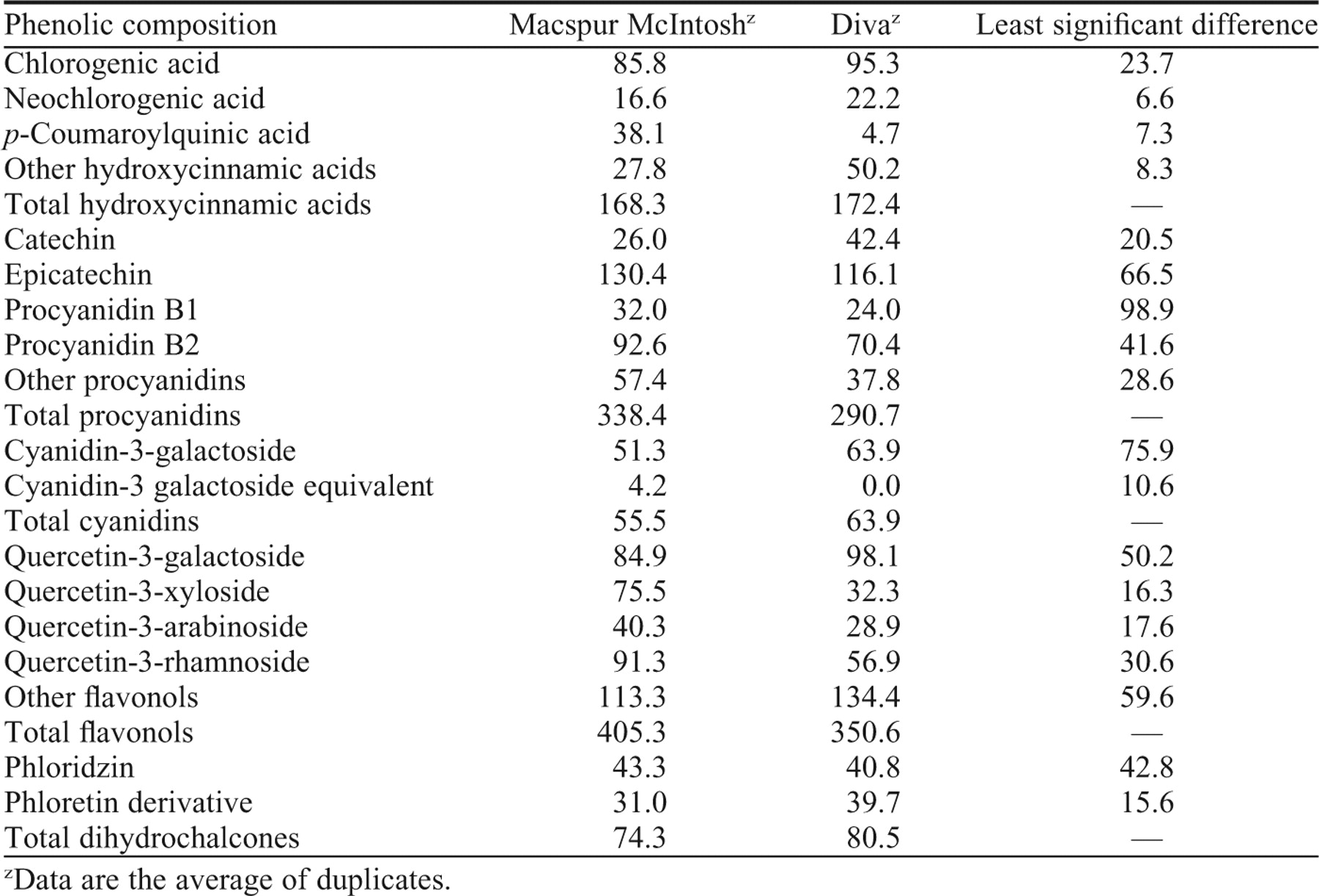 Phenolic composition (μg·g−1 fresh-frozen weight) in the flesh of ‘Diva’ and ‘Macspur McIntosh’.

Storage and Other Horticultural Characteristics

After 2.5 months of regular cold storage at 2 °C, fruit quality, taste, and firmness were good. After 4.5 months in regular cold storage, fruit was firm (6.2 to 6.4) as measured by a EPT-1 Pressure Tester (Lake City Technical Products Inc., Kelowna, BC, Canada), TA was less than average (0.43%), and SSC was medium (12%). Its fresh eating qualities are excellent and taste and aroma are good. Fruit quality is superior in texture and taste compared with ‘Spartan’ stored under similar conditions.

‘Diva’ is resistant to apple scab [Venturia inaequalis (Cke) Wint.] and no sign of fire blight, caused by Erwinia amylovora (Burril) Winslow et al., was observed during the evaluation period.

‘Diva’ was compared with several genotypes used for cider production by ‘Cidrerie du Minot’, a commercial cider producer (http://www.duminot.com) using its standard routine to make cider as follows. The apples were picked at maturity and stored between 1 and 2 °C for 1 to 2 months until pressing. Each genotype was grounded and pressed separately using a standard cider press. Eighteen liters of must were collected from each genotype and transferred into separate carboys where yeast (Saccharomyces cerevisiae Meyen ex E.C. Hansen) was added and fermentation proceeded at 12 °C. During the fermentation process, SSC (Brix) and TA readings were carried out twice a week. Bentonite was added to stabilize and clarify proteins and, once the desired alcohol and remaining sugar content had been achieved, the fermentation was halted by reducing the temperature and clarified using 0.45-μm filters. Alcohol, density, and TA were measured and sulfur dioxide was added for sterilization. Finally, the cider was carbonated and bottled. The final cider was evaluated by four experienced judges similar to the ones involved in the previous work (Khanizadeh et al., 2000) and ‘Diva’ ranked higher than ‘Macspur McIntosh’ for all attributes, visual, olfactory, and taste (Table 4). ‘Macspur McIntosh’ was used in this study for comparison as a result of its wide use for processing, similar to ‘McIntosh’ in Quebec.

A Canadian Plant Breeder's Right has been issued (Application No. 06-5437, http://www.inspection.gc.ca/english/plaveg/pbrpov/cropreport/app/app00006302e.shtml) and limited quantities of nonindexed budwoods are available for research purposes (universities and research stations) from Shahrokh Khanizadeh (North America) or from Mieosis Inc. (Europe) on written request. Interested nurseries may enquire about “nonexclusive licenses” directly from AAFC.

Fruit of ‘Diva’ at maturity. 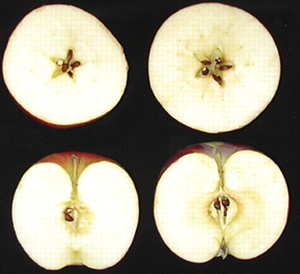 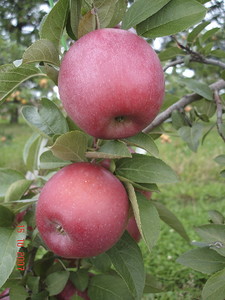