‘Peacework’ is a new open-pollinated, early red bell pepper cultivar with Cucumber mosaic virus (CMV) resistance developed for and within organic systems. Development of this cultivar was conducted at Cornell University's Department of Plant Breeding and Genetics in Ithaca, NY, and Freeville Organic Research Farm in Freeville, NY, as well as at the farms of members of the Organic Seed Partnership (OSP) and in cooperation with the Northeast Organic Farming Association of New York. ‘Peacework’ is well adapted to northeastern and northwestern U.S. growing conditions and also provides CMV resistance that could be transferred to peppers adapted to organic production in other environments. The performance and quality of ‘Peacework’ is comparable to ‘King of the North’, a cultivar popular for organic production in the Northeast. The pedigree of ‘Peacework’ potentially combines several taxonomically distinct sources of CMV resistance and tolerance, which would increase the degree and durability of resistance to this economically important virus. ‘Peacework’ was evaluated for yield, size, earliness, and fruit wall thickness in organic replicated trials in Oregon in 2006 and in New York in 2007 and for flavor, productivity, and fruit quality by members of the OSP, who trialed ‘Peacework’ on their farms.

Cucumber mosaic virus is a widespread pathogen that infects more than 1200 plant species and is readily transmitted by more than 80 species of aphids (Palukaitis and Garcia-Arenal, 2003). The wide plant host range makes cucumber mosaic a disease that is particularly difficult to control; weeds may act as reservoirs for the virus and there are few options for rotation crops that would not perpetuate the virus in growers' fields (http://vegetablemdonline.ppath.cornell.edu/). Furthermore, CMV can alter resistance responses to other viruses such as Pepper mottle virus when plants are coinfected with both viruses (Guerini and Murphy, 1999; Murphy and Kyle, 1995). Sources of resistance to CMV have been identified in pepper, but the inheritance of the trait is complex and the development of new resistant varieties is not straightforward (Ben Chaim et al., 2001; Greenleaf, 1986; Grube et al., 2000).

The Capsicum frutescens accession BG2814-6 (J. LaBorde, Mexico) and Capsicum annuum cultivar ‘Perennial’ (A. Palloix, INRA, France) are resistant to CMV (Grube et al., 2000). These two sources of resistance were combined in a cross between the resistant parents (Fig. 1). The hybrid was crossed with the bell cultivar ‘Jupiter’ [T. Williams, Syngenta (NK brand), Golden Valley, MN], which eliminated pungency and provided a large, blocky bell fruit type (Stewart et al., 2005). The CMV susceptibility in ‘Jupiter’ also provided a clear contrast to assess the transfer of resistance into a bell background. Plants were selected for CMV resistance at the F2 generation as judged by a lack of virus symptoms at 10 to 14 d after two manual inoculations with CMV-V27 as per established protocols (Grube et al., 2000). The V27 isolate produces severe symptoms that have made it useful in applied CMV resistance breeding programs at Cornell (Grube et al., 2000). Resistant F2 plants were crossed to and selected in two cycles to ‘Verdel’ [Syngenta (Rogers brand), Boise, ID], a bell pepper with a genetic background with reduced symptom severity response to CMV (Thorup, 2000). The resulting progeny were further crossed to ‘Gadir’ (Clause Seeds, Portes lès Valence, France), a bell pepper with CMV resistance/tolerance derived from C. baccatum (Grube, 1999), and tested for CMV resistance in the F3 families of resistant F2 selections. These resistant F3 plants potentially comprise a CMV resistance package of four sources of resistance/tolerance from three species of pepper. Given the number of resistance alleles and their complex inheritance from these sources, it would be interesting to perform genomic analyses on the resistant selections to determine which genomic regions were transferred from the resistant parents. Given the number of crosses in the preceding portion of the pedigree and the following crosses and selections for quality and agronomic performance, it is unlikely that all of the resistance loci were retained.

Crosses were made with ‘King of the North’ to introduce CMV resistances and F2 individuals from this cross that lacked CMV-induced symptoms after inoculations were selected (Fig. 1). These selections were crossed with ‘Early Red Sweet’ (Frank Kutka, MN) to improve earliness for the shorter northern growing season. Asymptomatic plants were self-pollinated and inbred selections were shared with organic pepper growers participating in the Organic Seed Partnership (http://www.plbr.cornell.edu/PSI/OSP%20home.htm). Selections were made for adaptation to their local conditions, disease resistance as well as quality and flavor as determined by growers and their customers. At the F6 generation, the cultivar was named ‘Peacework’ and evaluated in replicated trials.

‘Peacework’ ripens from green to red and was selected for earliness, yield, and pericarp thickness at the red-ripe stage (Fig. 2). During hot, dry conditions, it retains flowers resulting in consistent and sustained fruit set. ‘Peacework’ has a good stocky, upright habit and foliage cover that is sufficient for regions without intense solar radiation. Fruit are flavorful and sweet and Brix measurements routinely indicate 8% soluble solids. No absolute source of CMV resistance has been identified in pepper, but the multiple sources of resistance that are in the pedigree of ‘Peacework’ likely contribute to its high and consistent level of resistance (Greenleaf, 1986; Kang et al., 2005).

Replicated organic trials were conducted in 2006 at the Lewis Brown Horticulture Farm at Oregon State University and in 2007 at the Freeville Organic Research Farm at Cornell University in New York. At each location, seedlings were started in a greenhouse and received no sprays to manage insects or disease at any time. At the Oregon location, plants were transplanted to the field after 6 weeks and were 61 cm apart in single rows on a 76-cm bed. Bio-grow 9-3-5 fish manure (BioBizz Worldwide, NV, Willemstad, Curacao) was banded in the row before planting at 618 kg·ha−1 and overhead irrigation was used. At the New York site, the peppers were transplanted after 7 weeks into double rows on plastic-covered 102-cm beds spaced 2.1 m apart. Plant spacing within rows was 41 cm. Before bed forming, dairy compost was spread at a rate of 19.6 t·ha−1. Analysis of the compost indicated it was equivalent to 195 kg·ha−1 of nitrogen. At transplanting, each plant was watered in with a dilute fish emulsion. Three plots of 12 plants were grown at both locations and 10 plants from each plot were analyzed discarding data from the plants at the ends of the rows. Red-ripe fruit were harvested weekly after the appearance of the first red fruit and continued until frost.

Organic early red bell pepper performance as a function of yield in New York (2007) and Oregon (2006).

‘Peacework’ was selected based on a lack of symptoms after inoculation with CMV-V27. Given that one parent in the pedigree was tolerant to CMV (virus accumulation with mild or no symptom), it was necessary to evaluate symptom development and CMV-V27 accumulation in leaf tissues of ‘Peacework’. Plants were inoculated as described, scored for symptom development, and tested for CMV-V27 accumulation in noninoculated leaves (systemic infection) at 3 weeks postinoculation using a commercial enzyme-linked immunosorbent assay (ELISA) kit specific to CMV (Agdia, Inc., Elkhart, IN). ELISA procedures were as recommended by the kit manufacturer. After adding substrate, reactions were allowed to develop at room temperature for ≈30 min and then recorded using a BioTek μquant plate reader (BioTek Instruments, Inc., Winooski, VT). A sample was considered positive for presence of virus if the ELISA absorbance value was greater than the healthy control threshold, which included three noninoculated plants of each genotype. The positive category was further divided into groups that were greater or less than three times the average mock-inoculated value. ‘Peacework's’ response to inoculation with CMV-V27 was compared with that of ‘King of the North’ (susceptible), BG2814-6, and ‘Perennial’ (both shown to be resistant; Grube et al., 2000).

CMV resistance in ‘Peacework’ is much improved over ‘King of the North’ (Table 3). BG2814-6 and ‘Perennial’ are two of the sources of resistance in the ‘Peacework’ pedigree. All BG2814-6 plants were asymptomatic, although two of the 60 plants had low but detectable CMV-V27 in noninoculated leaves. Similarly, CMV-V27 was detected in two of 60 ‘Perennial’ plants with one of the infected plants expressing mild mosaic symptoms. Eighty-seven percent of ‘Peacework’ individuals were categorized as resistant to CMV-V27 (i.e., plants were symptomless and CMV-V27 was not detected in leaves by ELISA). Among those ‘Peacework’ plants infected with CMV-V27, only those plants with high virus titer were severely symptomatic. In some cases, plants were symptomless but contained a low titer of CMV-V27 in noninoculated leaves (Table 3). Both ‘King of the North’ and ‘New Ace’ had far fewer resistant individuals, 21% and 28%, respectively, and susceptible plants tended to be highly symptomatic and accumulate higher amounts of virus (Table 3.) ‘King of the North’ plants with low virus titer were highly symptomatic, which was not observed in ‘Peacework’. This results from developing symptom phases in CMV-infected pepper plants in which later stages of infection continue to express symptoms but leaves contain significantly less virus (Murphy and Bowen, 2006). In summary, the CMV resistance in ‘Peacework’ is clearly higher than ‘King of the North’ and ‘New Ace’.

Number of individuals of each genotype that accumulate different levels of Cucumber mosaic virus.

Pedigree breeding and selection of ‘Peacework’.

Examples of ripe ‘Peacework’ fruit (A) and a plant in the field in New York (B).

‘Peacework’ yield through time measured by numbers of ripe fruit harvested during replicated trials in comparison with other varieties. 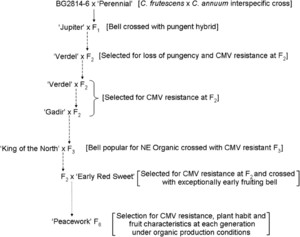 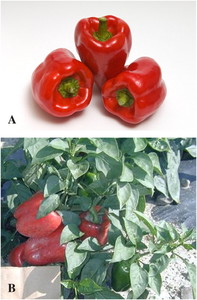