Caladium 75-14, a Spotted, Fancy-leaved Cultivar for Containers and Sunny Landscapes

As a common pot and landscape plant, caladium (Caladium ×hortulanum Birdsey, Araceae Juss.) is valued for its colorful leaves and low maintenance requirements (Evans et al., 1992). Commercial caladium plants are grown from tubers. Central Florida growers produce greater than 95% of the tubers for the worldwide market (Bell et al., 1998; Deng et al., 2005). Tuber yield is one of the primary factors determining a caladium cultivar's production value and whether the cultivar will be acceptable to growers and viable in commercial production. Poor tuber yield has been one of the main reasons why many early cultivars were removed from commercial tuber production and many new breeding lines with novel colors or coloration patterns have not become commercialized. Developing caladium cultivars with good tuber yield has been one of the main breeding objectives for the University of Florida's caladium breeding program at the Gulf Coast Research and Education Center since the program began in 1976.

Caladium 75-14 (Figs. 1 and 2) is a new spotted, fancy-leaved cultivar with superior tuber yield. Plants of caladium 75-14 are vigorous and can quickly fill a landscape space. Its leaves are resistant to sunburn, allowing this cultivar to perform well in full-sun landscapes. With its multiple branching habit and plant vigor, caladium 75-14 produces high-quality plants in container forcing.

Plants of caladium 75-14 grown for ≈4 months in full sun in ground beds had an average height of 40 cm. The largest leaf on plants grown in a 45% shaded greenhouse produced from an intact No. 1 tuber in an 11.4-cm pot averaged 19 cm long and 12 cm wide 8 weeks after planting.

Field plots were organized in a randomized complete block design consisting of three replications. Each plot was 1.2 m2 and was planted with 30 propagules (tuber pieces). Three major commercial cultivars that had a similar coloration pattern (spotted) were also planted in the field as controls to assess the tuber yield and plant performance of caladium 75-14. They were: ‘Galaxy’ (fancy-leaved, vigorous), ‘Gingerland’ (lance-leaved, prostrate), and ‘Miss Muffet’ (fancy-leaved, dwarf). An analysis of variance was conducted using the GLM procedure in the SAS program followed by mean separation by protected Fisher's least square difference (SAS Institute, 2003).

Landscape performance of caladium 75-14 grown under full-sun conditions was evaluated in 2005 and 2006 on the same plots used for assessing tuber production. Plant height, number of leaves, and leaf sizes were recorded ≈4 months after planting. Three plants in the center of each plot (with 30 plants) were randomly selected for the objective measurements. Plants in each plot were also evaluated for overall plant quality and leaf sunburn tolerance, three times in the 2005 growing season and two times in the 2006 growing season. The scale for plant quality evaluation was 1 to 5 with 1 being very poor (few leaves and lack of vigor) and 5 being excellent (full plants, numerous leaves, and bright color display). The scale for leaf sunburn tolerance was also 1 to 5 with 1 being very susceptible to sunburn (leaves having numerous sun-damaged areas or holes) and 5 being resistant to sunburn (no visible sun-damaged areas).

Caladium 75-14 plants were slightly taller (≈10 cm) than ‘Galaxy’ and ‘Gingerland’, but ≈26 cm taller than ‘Miss Muffet’. Its leaves were smaller than those of ‘Galaxy’ and ‘Gingerland’ but similar in size to those of ‘Miss Muffet’ (Table 2). For overall plant quality, caladium 75-14 received the highest scores among the cultivars tested in both growing seasons (2005 and 2006) and its scores were significantly higher than all controls in three of the five evaluations. The leaf sun tolerance of caladium 75-14 was rated 4 to 5 (good to excellent) in all the evaluations during the two growing seasons. Except for one evaluation in Sept. 2006, caladium 75-14’s sun tolerance ratings were higher than all of the controls.

Caladium 75-14’s performance in container forcing was evaluated by planting No. 1 tubers in 11.4-cm containers. Dry tubers were planted either intact or de-eyed in a peat/vermiculite mix (VerGro Container Mix A; Verlite, Tampa, FL) on 26 Mar. 2007. The tests were performed in a greenhouse with 45% light exclusion during the summer in Wimauma, FL. Average daily temperatures ranged from a low of 16 °C (night) to a high of 29 °C (day) during the tests. Plants were grown on metal benches in the greenhouse and arranged according to a randomized complete block design with 10 replications. Three fancy-leaved commercial cultivars, Candidum Junior (a cultivar commonly used for pot plant production), Galaxy, and Miss Muffet, were included as controls. Plant height, number of leaves, and leaf sizes were recorded 8 weeks after planting. At the same time, each pot plant was rated on a scale of 1 to 5 for quality as pot plants: 1 = very poor, 3 = fair, and 5 = very good (many leaves, bright and full plants). An analysis of variance and mean separation were done using the GLM procedure in the SAS program to compare the performance of caladium 75-14 to the controls.

In summary, caladium 75-14 is a new spotted, fancy-leaved cultivar. It has shown superior tuber production potentials in the replicated field trials. This yield is consistent with growers’ trials (T. Cantwell-Bates, personal communication). With its vigorous growth habit, caladium 75-14 can quickly fill a landscape space with many leaves and resist sunburn. These characteristics allow it to perform well in the landscape in full sun. In container forcing, caladium 75-14 behaves much like ‘Galaxy’ with similar sprouting time, leaf size, and plant height, but caladium 75-14 produces pot plants of higher quality regardless of tuber treatments (intact or de-eyed). Tuber de-eyeing can improve caladium 75-14’s plant quality when forced in small containers (10 cm in diameter), although this practice is not required for producing pot plants in 20-cm or larger containers (Z. Deng, personal observation). For commercial tuber production, growers are encouraged to use preplant hot water treatment (Rhodes, 1964) and standard postharvest treatment (Harbaugh and Tjia, 1985).

Caladium 75-14 will be trademarked as Berry Patch. A plant patent will be sought from the U.S. Patent and Trademark Office and plant patent rights will be assigned to the University of Florida, Board of Trustees. Propagation and distribution will be licensed by the Florida Foundation Seed Producers, Inc., P.O. Box 110200, Gainesville, FL 32611. Information on tuber availability and propagation agreements can be obtained from the Florida Foundation Seed Producers, Inc. 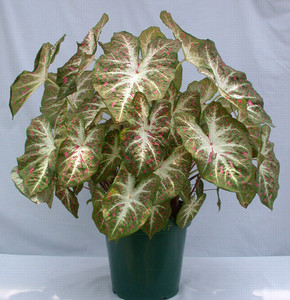 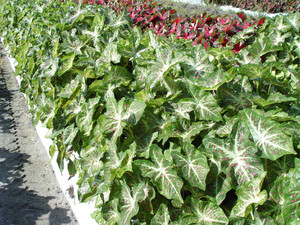