‘Yamhill’, tested as OSU 542.102, resulted from a cross of OSU 296.082 × VR 8-32 made in 1990 by Shawn A. Mehlenbacher and David C. Smith (Fig. 1). OSU 296.082 is a seedling from a cross of OSU 17.068 × ‘Willamette’, and VR 8-32 is an OSU selection from a cross of the Sicilian cultivar ‘Montebello’ and the obsolete pollenizer ‘Gasaway’. Hybrid seeds from this cross were harvested in Aug. 1990, stratified, and the resulting seedlings grown in the greenhouse during the summer of 1991. In Oct. 1991, 225 seedlings from this cross were planted in the field. The designation OSU 542.102 indicates the row and tree location of the original seedling. Nuts were first observed on the original seedling in Sept. 1994. Nuts were harvested from the original seedling tree and evaluated in 1994 and in each of the next 4 years. OSU 542.102 was propagated by tie-off layerage of the suckers in the summers of 1999 and 2000. The resulting trees were lined out in a nursery row the next year and then used to plant two replicated yield trials in the spring, one in 2000 and the other in 2001. Eight trees of each genotype were planted in the first trial (Table 1) and four trees in the second trial (Tables 1–3). The trials were located at the Smith Horticulture Research Farm in Corvallis and planted as randomized complete block designs with a single tree of each genotype in each block. Oregon's leading cultivar, ‘Barcelona,’ and the recently released ‘Lewis’ and ‘Clark’ were included as checks. Three EFB-resistant cultivars were also included: the pollenizer ‘Gamma’ in the first trial and the Spanish cultivar ‘Ratoli’ and the pollenizer ‘Epsilon’ in the second trial (Lunde et al., 2000; Mehlenbacher and Smith, 2004). Several additional numbered selections were included in both trials. The origin and meaning of the name Yamhill are uncertain, but it appears to have been used by European Americans for a Native American group of the Kalapooian family who lived along the Yamhill River (McArthur and McArthur, 2003). The Yamhill River is a tributary of the Willamette River. Yamhill County is an important hazelnut-growing area in Oregon.

Nut yield, trunk cross-sectional area, and yield efficiency of ‘Yamhill’ and control cultivars in hazelnut trials planted in 2000 and 2001. 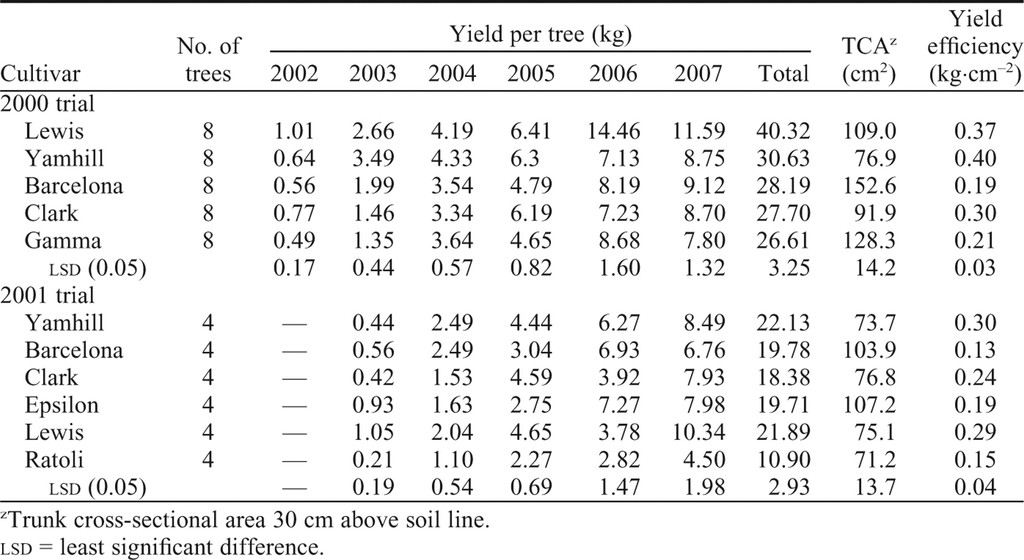 Description of nuts and kernels of ‘Yamhill’ in comparison with those of other hazelnut cultivars in a trial planted in 2001.z

Frequency of good nuts and of nut and kernel defects in ‘Yamhill’ and standard hazelnut cultivars in the second trial planted in 2001.

‘Yamhill’ nuts are borne in clusters of four to five in husks equal in length to the nuts. The nuts fall free of the husk at maturity and can be mechanically harvested 10 to 14 d earlier than ‘Barcelona’. The earlier maturity is a significant improvement, because in most years, harvest of ‘Yamhill’ will be completed before the start of the rainy season, which coincides with the beginning of the ‘Barcelona’ harvest in the Willamette Valley. The kernels fill the nuts well even when trees have a heavy crop. The raw kernels are attractive and have little fiber on their light brown pellicles (Table 2; Fig. 3). Pellicle removal (blanching) ratings are equal to ‘Barcelona’. When lightly roasted (150 °C for 15 min) and rubbed, approximately half of the pellicle is removed. Kernel quality is suitable for many end uses, including chocolate products and baked goods, and is competitive with kernels imported from Turkey. Chocolate makers prefer kernels 11 to 13 mm in diameter. Most kernels of ‘Yamhill’ are of this size, although some are smaller. The small nuts of ‘Yamhill’ are not suited to the in-shell market. A high percentage of the kernels of ‘Yamhill’ are marketable. The frequency of blanks, poorly filled nuts, and doubles is less in ‘Yamhill’ than in ‘Barcelona’ (Table 3). ‘Yamhill’ has a low frequency of moldy kernels, which was especially striking in 2005 when mold was a problem on ‘Lewis’ and many other genotypes.

‘Yamhill’ trees set a moderate to high number of catkins that shed copious amounts of pollen early in the season with ‘Barcelona’. Pollen has been collected and used in several controlled pollinations, and both quantity and viability appear to be very good. ‘Yamhill’ has incompatibility alleles S8 and S26 as determined by fluorescence microscopy (Mehlenbacher, 1997). Both alleles are expressed in the females, but only S8 is expressed in the pollen because of dominance. Female inflorescences of ‘Yamhill’ emerge early in the season, approximately with ‘Barcelona’, so pollenizers that shed pollen in early midseason would be suitable. We encourage the planting of three pollenizers that shed pollen at different times during the period that female inflorescences are receptive to increase the likelihood that they will be pollinated. Pollenizers with complete resistance to EFB would eliminate the need for fungicide control in the orchard. We recommend one-third each of ‘Gamma’ (S2 S10) and ‘Santiam’ (S3 S15), which shed pollen early in the season and which have short shedding periods. For the remaining third, we recommend a mixture of later-shedding types, including ‘Delta’ (S1 S15), ‘Epsilon’ (S1 S4), ‘Zeta’ (S1 S1), and ‘Jefferson’ (S1 S3), all of which have complete resistance to EFB. Pollen of ‘Lewis’ (S3 S8) and ‘Clark’ (S3 S8) expresses S8 and is thus incompatible on female inflorescences of ‘Yamhill’.

‘Yamhill’ has complete resistance to EFB conferred by a dominant allele from ‘Gasaway’. Trees of ‘Yamhill’ were inoculated in the greenhouse in 1996 with fungal spores of Anisogramma anomala as described by Lunde et al. (2000). Enzyme-linked immunosorbent assay (Coyne et al., 1996) 6 months after inoculation failed to detect presence of the fungus. ‘Yamhill’ trees in orchards in the northern Willamette Valley adjacent to infected trees of susceptible cultivars have remained free of disease. Random amplified polymorphic DNA markers UBC 152800 and UBC 268580 that flank the resistance allele in ‘Gasaway’ (Mehlenbacher et al., 2004) are present in ‘Yamhill’. ‘Yamhill’ is heterozygous for resistance and transmits this trait to half of its seedlings. Eastern filbert blight is now present throughout the Willamette Valley where 99% of the U.S. hazelnut crop is grown. Pruning to remove cankers and fungicide applications are currently used to manage the disease in orchards of ‘Barcelona’ and other susceptible cultivars. Like ‘Santiam’, released in Feb. 2005 (Mehlenbacher et al., 2007), ‘Yamhill’ is suitable for planting in areas with high disease pressure. The response of ‘Yamhill’ to inoculation with other isolates of EFB from the eastern United States has not been tested. Inoculations to date have been only with the Oregon isolate.

Susceptibility of ‘Yamhill’ to bacterial blight caused by Xanthomonas campestris pv. corylina has not been determined, although no trees have been lost to the disease in our trial plots.

Susceptibility to big bud mite (primarily Phytoptus avellanae Nal.) was rated in the second replicated trial after leaf fall once per year for 5 years (Dec. 2003 to 2007). The scale was from 1 (no blasted buds) to 5 (many blasted buds). The average ratings indicate a high level of resistance for ‘Yamhill’ (1.1) and ‘Barcelona’ (1.1), moderate resistance for ‘Lewis’ (2.1), and an intermediate response for ‘Clark’ (3.0). Ratings for ‘Yamhill’ and ‘Barcelona’ were not significantly different [least significant difference (0.05) = 0.6]. Blasted buds are very rare on ‘Yamhill’, so chemical applications to control bud mite are unnecessary.

‘Yamhill’ layers generally root easily and abundantly. Rooted layers are easy to handle in the nursery and are less vigorous and smaller in height and caliper than those of ‘Barcelona’. Scions of ‘Yamhill’ were first distributed to nurseries in Jan. 1998 to allow propagation in advance of release. Information on its performance was provided to nurseries annually until release in Jan. 2008. In vitro cultures were first established in 1999 as part of a project funded by the Oregon Hazelnut Commission to demonstrate the feasibility of micropropagation (Bill Proebsting and Luigi Meneghelli, unpublished data). The study indicated that micropropagation of hazelnut was feasible and that multiplication rates for ‘Yamhill’ were acceptable. Cultures were made available to private companies for micropropagation on a commercial scale. Several orchards have been established in the Willamette Valley using micropropagated trees.

‘Yamhill’ was released as a public cultivar and may be propagated in the United States without restriction. A list of micropropagators and nurseries, and small quantities of scion wood, may be obtained from S.A. Mehlenbacher. 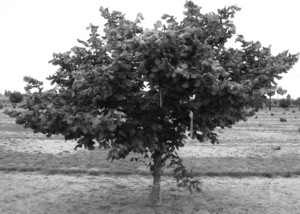 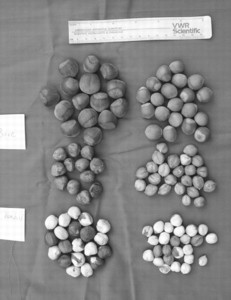