Cacao (Theobroma cacao L.) is an important component of small farming systems in the tropics. It adapts to a wide range of soils and climatic conditions, grows well under minimum tillage, adapts to temporary intercropping, has cash crop value in local and export markets, and pods are harvested year-round, providing a steady source of income.

World average cacao yield is low and was 522 kg·ha−1 in 2005 (Food and Agriculture Organization, 2007). In a commercial production system, it is highly recommended that cacao be propagated through the use of controlled-pollinated seed obtained from crosses of two or more productive parental clones (Batista, 1981; Wood and Lass, 1985). The use of this so-called “hybrid seed” is considered the simplest and cheapest method of cacao propagation and may offer the opportunity to assemble into a single tree useful traits from distant parents (Enriquez and Paredes, 1985; Enriquez and Soria, 1984; Willson, 1999). Other proponents also consider the use of controlled-pollinated seed as the most useful means of increasing cacao production (Hunter, 1990). In most cases, however, the data available to support the high yielding assumption attributed to controlled-pollinated seed is based only on the production obtained from a few unique segregating ‘F1’ trees. Additionally, the yield data needed from long-term experiments to validate this assumption are not available. Lockwood et al. (2007) observed that the optimal strategy for clone selection is by family selection followed by evaluation of large numbers of clones drawn from superior families. There is a need to identify clones with high yield potential for use by growers or in breeding programs (Warren, 1993). In this report, we describe the release of nine cacao clones selected for high yield during 4 years of production.

In a multisite (Corozal, Gurabo, Yabucoa) experiment in Puerto Rico, Irizarry and Rivera (1998) studied the yield potential of 1320 trees representing five interclonal cacao full-sib families (UF-668 × Pound-7, IMC-67 × UF-613, EET-400 × SCA-12, SCA-6 × EET-62, and IMC-67 × SCA-12) over a period of 8 years (1986 to 1993) of production at two locations and 4 years (1986 to 1989) at a third location (Table 1). Trees were ≈4 years old when first harvested. All parental clones used in the generation of the full-sib families belong to various populations of the Forastero cacao group (Motamayor et al., 2008). The controlled-pollinated seed from these families was introduced from the Cacao Improvement Program at the ‘Centro Agronómico Tropical de Investigación y Enseñanza’ (CATIE), Turrialba, Costa Rica. The self-compatible parental clones possessed various levels of resistance against important cacao diseases (International Cocoa Germplasm Database, 2008) such as black pod disease (Phytophthora spp.), witches broom (Moniliophthora perniciosa), and vascular streak dieback (Oncobasidium theobromae) and were of frequent use in breeding programs at CATIE. Consequently, resultant seedlings were expected to have superior combining ability for higher yield and resistance to diseases. Single tree harvests were made throughout the experiments. The authors concluded that only ≈3% of the progeny in each family accounted for ≈60% of the total family yield. In a second experiment, Irizarry and Goenaga (2000) grafted scionwood from the 40 highest-yielding trees obtained from these families at the three locations above onto an open-pollinated rootstock (EET-400) with resistance to ceratocystis wilt (Ceratocystis fimbriata) and evaluated these clonal selections under full sunlight and intensive management at Corozal, Puerto Rico, during 4 years of production. Grafting plays an important role in the preservation of desirable genetic traits observed in cacao clonal selections and in maintaining homogeneity of the propagating materials (Paulin et al., 2007; Ramadasan and Ahmed, 1984). In addition to the 40 clones, five of the eight parental clones, UF-668, Pound-7, EET-400, SCA-12, and IMC-67, representing the original families (Irizarry and Rivera, 1998), were also grafted onto the same rootstock for comparison. Grafted clones were arranged in a randomized complete block design with six replications, each containing two experimental trees per treatment and evaluated during 4 years of production, 1994 to 1997, when trees were 3 to 6 years old. Organoleptic evaluation of 65% cacao-containing chocolate samples from the highest yielding clones was conducted at Guittard Chocolate Company, Burlingame, CA, using the protocol of the CFC/ICCO/INIAP Flavor Project (Sukha et al., 2008).

Of the 40 clones selected for final evaluation, only nine demonstrated superior yield when compared with either the combined mean of the five parental clones or the mean of their highest yielding parent (Table 2). For this reason, any potential negative effect of the rootstock on yield appeared negligible for these nine clones. These clones yielded an average of 2170 kg·ha−1 of dry beans per year during their first 4 years of full production and there were no significant yield differences among them. Clones TARS-1, TARS-9, TARS-23, and TARS-34 had lower pod index values than other clones (Table 2). A low pod index is normally associated with good bean size and a reduction in harvesting costs. None of the clones selected from families IMC-67 × SCA-12 and IMC-67 × UF-613 yielded more than the combined mean of the five parental clones or the individual mean of parents IMC-67 and SCA-12 (data not shown). A description of organoleptic characteristics of the nine high-yielding clones demonstrated wide diversity in flavor characteristics among clones (Table 3).

Yield comparison of nine superior cacao clones and of five of their corresponding parental clones grown under full sunlight and intensive management in Puerto Rico during a 4-year harvesting period, 1994 to 1997. 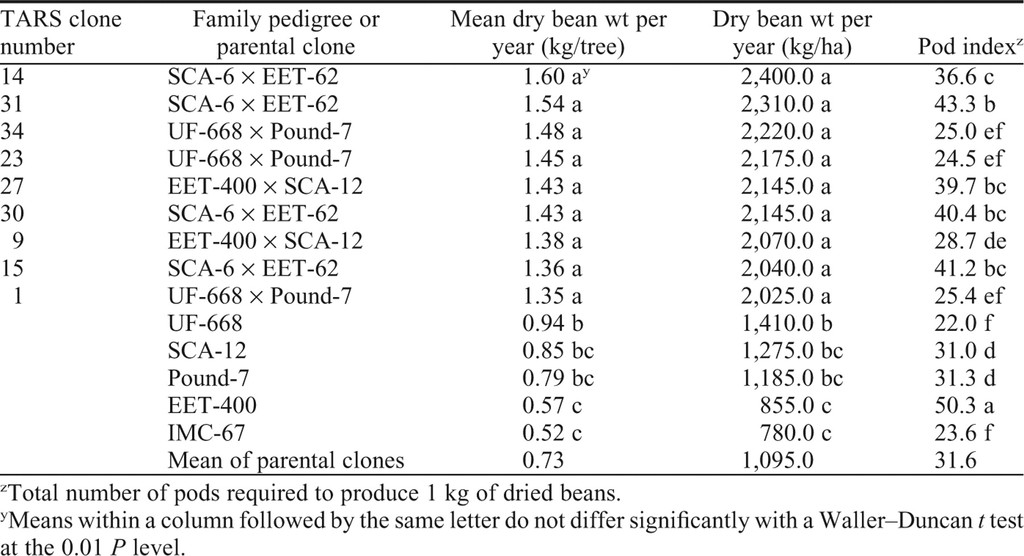 Chocolate flavor profiles of nine cacao clones selected for high yield in Puerto Rico during a 4-year harvesting period, 1994 to 1997. 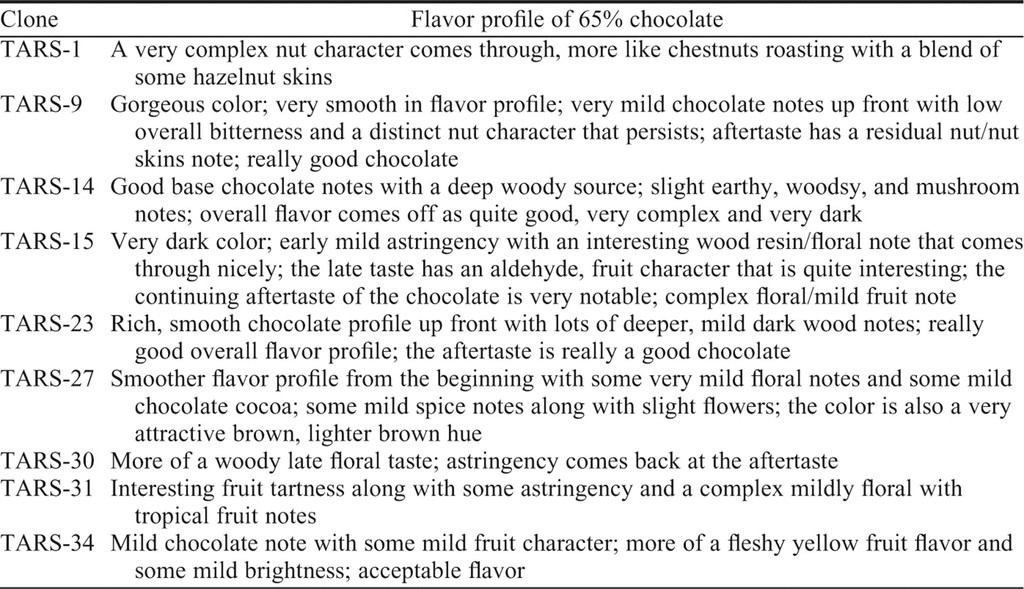 In 2002, scionwood of these nine clones was grafted onto Amelonado rootstock and trees have been established at the USDA-ARS cacao germplasm collection in Mayaguez, Puerto Rico. Scionwood and seed samples of these clones are now available for research purposes, including development and commercialization of new cultivars. A limited quantity of scionwood and seed may be obtained by writing to orders@ars-grin.gov or to the curator at brian.irish@ars.usda.gov. It is requested that appropriate recognition be made to the source if this germplasm contributes to the development of a new breeding line or cultivar.