‘Estrella’ and ‘Sublime’ are mid–early ripening apricot cultivars (Prunus armeniaca L.) with optimal productivity levels, excellent fruit quality, and an attractive color. Although ‘Estrella’ and ‘Sublime’ are both self-incompatible, they are intercompatible cultivars. Bloom dates are very coincident and they can be planted together for successful pollination. Their fruits have excellent organoleptic characteristics, and both cultivars have a free stone and an orange skin ground color, extensive red blush, and orange flesh color, which make them very attractive.

‘Estrella’ and ‘Sublime’ resulted from a cross made in 2001 at Murcia, Spain, between the North American cultivar Orange Red® (Hough and Bailey, 1982) and the apricot selection ‘Z 211–18’, which was obtained from the CEBAS-CSIC breeding program (Fig. 1). This cross was made with the objective of obtaining mid–early ripening cultivars with excellent fruit quality as well as optimal productivity with reduced need for thinning. The design of this specific intervarietal cross was motivated by fruit quality characteristics of ‘Orange Red’. This cultivar is characterized by especially interesting fruit quality attributes such as orange ground color, intense red blush, orange and juicy flesh, and high organoleptic qualities. It is appreciated greatly by consumers. However, ‘Orange Red’ is also characterized by high chilling requirements (Ruiz et al., 2007), which lead to fructification problems in warm climates, as is the case in the southeast of Spain. In addition, another shortcoming associated with ‘Orange Red’ in our field conditions is low fruit weight. To resolve these problems, ‘Orange Red’ was crossed with selection ‘Z 211/18’, which is characterized by low chilling requirements and high fruit weight as well as high fruit firmness, orange color, and good organoleptic qualities.

‘Estrella’ and ‘Sublime’ were selected originally as seedling trees on their own roots and then grafted onto 4-year-old apricot seedlings (three replicates each). Trees of ‘Estrella’ are large and very vigorous with a medium spread. They have a moderate density of flowers, mainly localized on fruiting spurs of 2 or more-year-old branches, and show a high fruit set. Trees of ‘Sublime’ are also very vigorous and are characterized by an erect growth habit. The flower density is moderate and flowers are localized on both fruiting spurs and productive shoots with a high fruit set. In both cultivars, the tree architecture greatly facilitates pruning (reduced branching habit). ‘Estrella’ and ‘Sublime’ are characterized by optimal productivity levels in comparison with traditional Spanish apricot cultivars. In addition, they have a reduced need for thinning, which reduces the cost of cultivation.

Sharka disease, caused by the Plum pox virus (PPV), is a serious limiting factor for temperate fruit production in those areas that are affected (Kölber, 2001). All apricot cultivars traditionally grown in Europe are susceptible to this disease (Martínez-Gómez et al., 2000), whereas several cultivars from North America such as ‘Goldrich’, ‘Sunglo’, ‘Orange Red’, and ‘Stark Early Orange’ show resistance to PPV and are used frequently as parents in breeding programs (Egea et al., 1999). In the case of cultivars Estrella and Sublime, ‘Orange Red’ and ‘Goldrich’ were used as parents to obtain PPV resistance. Evaluation of PPV resistance in controlled greenhouse conditions (Martínez-Gómez and Dicenta, 1999), for three cycles of study, showed the resistance of the three studied replications of ‘Estrella’ to Dideron-type PPV isolates, whereas symptoms were observed for the Sublime cultivar.

Time of bloom and floral compatibility.

Comparative analysis of tree and fruit characteristics of ‘Estrella’ and ‘Sublime’, the Spanish cultivar Búlida, the French cultivar Bergeron, and the North American cultivar Orange Red under experimental conditions in Murcia, Spain.

These new cultivars are self-incompatible; this was demonstrated in the field (by bagging branches) and in the laboratory (by observing pollen tube growth in 10 flowers) according to methodology described by Burgos et al. (1993). Polymerase chain reaction (PCR) analysis, using consensus PCR primers, which have been reported as identifying Prunus S alleles (Sutherland et al., 2004), revealed that their alleles of compatibility are not coincident (S1Snew for ‘Sublime’ and S1S7 for ‘Estrella’) and, because their blooming dates are similar, they can be used to pollinate one another. In addition, other self-compatible cultivars (with the Sc allele of compatibility) with similar blooming dates such as ‘Rojo Pasión’, ‘Thyrinthos’, ‘Canino’, and ‘Soledane’ also can be used as pollinators.

‘Estrella’ and ‘Sublime’ are mid–early ripening cultivars in comparison with the traditional Spanish apricot cultivars. In our experimental conditions in Murcia, the ripening date for both new cultivars was ≈25 May, some days earlier than the Spanish cultivar Búlida and the North American cultivar Orange Red (Table 1). Fruits of ‘Estrella’ and ‘Sublime’ mature uniformly. At that time in the season, there is limited competition with apricots produced in other European countries (e.g., ‘Early Blush’, ‘Soledane’, and ‘Thyrinthos’). In addition, ‘Estrella’ and ‘Sublime’ fruits are more attractive, firmer, and better-tasting than ‘Mauricio’, ‘Palabras’, and ‘Búlida’, the Spanish cultivars maturing at a similar time.

The Estrella and Sublime cultivars are registered in the European Union Community Plant Variety Office with the registration numbers 2007/1425 and 2007/1422, respectively. Virus-free budwood is available from the CEBAS-CSIC (Spain). The budwood has been tested and is free of the following viruses: Prunus necrotic ringspot virus, Apple mosaic virus, Apple chlorotic leaf spot virus, Prune dwarf virus, and PPV.

Pedigree of ‘Estrella’ and ‘Sublime’ apricots. 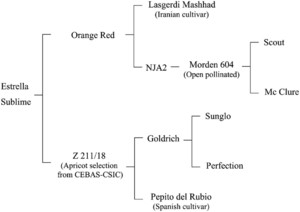 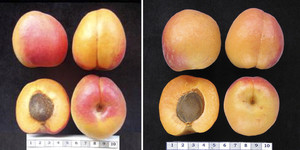