In Greece, the dominant kiwifruit cv. since 1973 has been Hayward with a total annual fruit production of 40,000 t and an acreage of 4400 ha (FAO, 2004). However, selection among 15,000 seedlings originated from open-pollinated ‘Hayward’ plants in northern Greece in 1989 by the farmer Christos Tsechelidis, resulting in the cv. Tsechelidis. Based on molecular analysis using small satellite DNA markers, the two genotypes (‘Hayward’, ‘Tsechelidis’) were considered to be different because they presented polymorphism in at least eight alleles. For example, the following primers/alleles, 97-411, 96-037b, 96-034, and 96-092, were present in ‘Tsechelidis’ and absent in ‘Hayward’. Also, 96-037a and 97-406 were present in ‘Hayward’ and absent in ‘Tsechelidis’ (Ilanidis et al., 2006).

Kiwifruit [Actinidia deliciosa (A. chev.) C.F. Liang et A.R. Ferguson var. deliciosa] is a deciduous vine indigenous to the mountainous regions of central and southwestern China. Approximately 70% of kiwi's world production is from China, Italy, Chile, and New Zealand (FAO, 2004). Kiwifruit consumption is increasing each year in central Europe, indicating an expanding market. The majority of the commercial plantings worldwide are of the cv. Hayward selected in New Zealand ≈70 years ago (Ferguson and Lay Yee, 1983).

The objective of this research was to evaluate the new cv. Tsechelidis in comparison with ‘Hayward’ regarding productivity and some fruit quality criteria.

This research was conducted for 3 years (2005 to 2007) in a kiwifruit orchard, which is located in Imathia prefecture (northern Greece). The vines of the cvs. Tsechelidis and Hayward were planted at a spacing 4 × 3.5 m and trained in a T-bar trellis system. The soil of the experimental orchard at a depth of 0 to 60 cm was characterized as clay loam (clay 26.8, silt 33.1, sand 40.1%) with medium cation exchange capacity (31.49 meq/100 g−1) and slightly alkaline (pH 7.38) with low electrical conductivity (0.51 mS·cm−1) and low organic matter (1.11%) and CaCO3 (3.7%) content. Soil nutrient contents were (mg·kg−1): phosphorus 32.1, potassium 276.7, calcium 602, magnesium 145.2, boron 0.19, manganese 12.8, zinc 4.77, iron 22.84, and copper 2.27. During spring at five canes per replication of all the experimental vines, percentage of bud burst was calculated per 2-m cane. During harvest, yield and fruit weight were recorded as well as fruit shape (length, width, and height). Furthermore, the following measurements and determinations were performed on 10 fruit per replication of all experimental vines at harvest: fruit firmness (kg·cm−2) with an Effegi penetrometer (Effegi, Milano, Italy) (two measurements were made at every fruit on two opposite largest sites), pH of juice, total soluble solids (TSS; % Brix) with an Atago PR-1 electronic refractometer (Atago Co. Ltd., Tokyo, Japan), ascorbic acid (vitamin C; mg/100 g−1 fresh weight) by oxalic acid (1%), L-malic acid (g·L−1), and total sugars (g·L−1) as described by Koukourikou-Petridou et al. (2007). In addition, ferric-reducing antioxidant capacity (FRAP assay) as well as total titratable acidity (TTA) were determined (Molassiotis et al., 2006). Leaf samples were collected at midsummer (20 July). Each leaf sample consisted of the third leaf past the final fruit on a fruiting lateral. Fruit flesh analysis was carried out from samples taken at harvest. Nitrogen was determined by the Kjeldahl procedure; phosphorus colorimetrically by the ammonium phosphovanadomolybdate method; potassium, calcium, magnesium, iron, manganese, and zinc by atomic absorption spectrometry (Model 2380; Perkin Elmer, Wellesley, MA) (Page et al., 1982); and boron by the azomethine-H method (Wolf, 1974). The experimental layout was a randomized complete block design including five replications of two cultivars including five vines per replication. Differences between means were evaluated by using Duncan's multiple range test at P ≤ 0.05.

Phenological observations showed that ‘Tsechelidis’ in comparison with ‘Hayward’ is more vigorous, slightly earlier in vegetative bud burst (22 to 25 versus 27 to 30 Mar.), in the onset of flowering (8 to 10 versus 13 to 15 May) and in the onset of maturity for harvest (20 to 23 versus 28 to 31 Oct.). Bud burst percentage per 2-m cane was not different for the two cultivars (Table 1).

Fruits of ‘Tsechelidis’ ripen ≈1 week earlier than fruits of ‘Hayward’. This was verified by change in TSS concentration until harvest and the lower firmness (data not shown). Crisosto et al. (1984) reported that a combination of the initial TSS at harvest and flesh firmness seemed to be a good maturity index for kiwifruit. It has been suggested that kiwifruit harvested with less than 6.2% TSS developed flesh breakdown (Crisosto and Crisosto, 2001).

Total yield, number of marketable fruits per vine, mean fruit weight, and fruit length were much greater in ‘Tsechelidis’ than ‘Hayward’ (Tables 1 and 2; Fig. 1). However, number of fruits per vine and height of the fruits were not significantly different between the two cultivars. Similar results on fruit dimensions were also reported by Ilanidis et al. (2006). From the results presented until now, it appears that the higher yield of ‘Tsechelidis’ could be ascribed to its higher fruit weight compared with ‘Hayward’, because the percentage of bud burst per cane and the total number of fruits per vine were not different. The large fruit size, uniformity of shape, and the absence of “double” fruits provide ‘Tsechelidis’ substantial advantages in fruit appearance. Furthermore, under unfavorable climatic conditions during anthesis (low temperatures, rain) that lead to bad fertilization of flowers, fruit size of ‘Hayward’ is expected to be more adversely affected than ‘Tsechelidis’. One horticultural practice to increase fruit size of ‘Hayward’ is by the application of forchlorfenuron, thidiazuron, gibberellic acid, or dichlorophenoxyacetic acid (Famiani et al., 2007). However, final fruit size is still smaller than ‘Tsechelidis’, which can develop its fruits without chemical treatments.

Kiwifruit dimensions and fruit weight of the cvs. Tsechelidis and Hayward at harvest of 3 years (2005 to 2007).

At harvest, total sugars, TSS, pH of juice, ascorbic acid content, total titratable acidity, and antioxidant capacity were higher, but firmness was lower in ‘Tsechelidis’ than in ‘Hayward’ (Tables 3 and 4). Our results on total sugars and acidity contents are consistent with those of Ilanidis et al. (2006). Fruit dry matter percentage and L-malic acid content did not show any difference between the two cultivars (Table 3). As reported by Castaldo et al. (1992), TTA is mostly the result of citric acid followed by quinic and malic acids at lower concentrations. The higher content of ascorbic acid of the cv. Tsechelidis was consistent with the higher antioxidants content determined through the FRAP assay. Furthermore, Ilanidis et al. (2006) reported that ‘Tsechelidis’ had higher total phenolics compared with ‘Hayward’. The sugar/acid ratio is a way to determine optimum harvest for several crops (Castaldo et al., 1992). At harvest, the flesh TSS/TTA ratio of ‘Tsechelidis’ was lower than that of ‘Hayward’. Sotiropoulos et al. (in press) reported that ‘Tsechelidis’ is more resistant to postharvest infection by the fungus Botrytis cinerea than ‘Hayward’ and is more resistant to fall frost during harvest.

Leaf and fruit (skin and flesh) nutrient concentrations of ‘Tsechelidis’ and ‘Hayward’ at harvest over 3 years (2005 to 2007).

In conclusion, ‘Tsechelidis’ seems to be a promising kiwifruit cultivar alternative to ‘Hayward’.

Representative fruits of the cvs. Tsechelidis and Hayward. 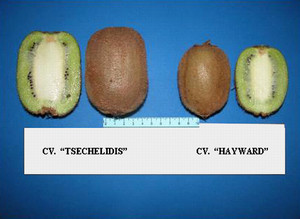