Tall fescue (Festuca arundinacea Schreb.) is a cool-season turfgrass that is commonly used throughout the North American transition zone for residential lawns, athletic fields, golf course roughs, and lower maintenance parks and recreation areas (Beard, 1973). The most devastating disease of tall fescue is brown patch caused by Rhizoctonia solani Kühn. Brown patch can reduce the overall quality and aesthetics of the turf stand (Couch, 1985; Martin and Lucas, 1984) and reduce stand density when disease is severe.

Current control options to reduce disease severity include restricting the amount of nitrogen applied to the turf (Burpee, 1995), limiting the duration of leaf wetness (Fidanza et al., 1996; Gross et al., 1998), and, in some cases, the use of fungicides (Fidanza and Dernoeden, 1996; Smiley et al., 2005). The development of resistant cultivars would provide the most practical, long-term approach to controlling brown patch. It has been documented by several authors that significant differences in susceptibility to brown patch exist among tall fescue cultivars (Burpee, 1995; Giesler et al., 1996; Green et al., 1999).

Currently, the disease resistance mechanism of brown patch resistance in tall fescue is not fully understood. Green et al. (1999) postulated that disease severity was a function of variation in leaf width and concluded that the wider leaf blades of the cultivar Kentucky 31 had less disease than the finer-leafed cultivar Mojave. Giesler et al. (1996) evaluated resistance of tall fescue to brown patch by comparing dense versus open canopies and found that a higher canopy density increased disease severity. They reported that a higher canopy density compared with a lower canopy density created a more favorable environment for brown patch by increasing relative humidity and leaf wetness. It was also suggested that hyphal expansion occurs more readily in dense canopies as a result of the close proximity of leaf blades. These studies have shed light on some of the physiological and environmental factors that play a role in resistance, but they did not address potential genetic factors that may be involved. To develop new cultivars with improved resistance, the genetic factors of brown patch resistance must be determined.

Plant breeders use heritability estimates to determine the influence of the environmental and genetic factors affecting the trait of interest and what selection procedure should be implemented to make improvements. Heritability can be defined as the proportion of the observed variation in a progeny that is inherited (Poehlman and Sleper, 1995). The extent to which replicated testing is required for selection will depend on the heritability estimate (Nyquist, 1991). Broad-sense heritability is the ratio of total genetic (additive, dominance, and epistatic) variance to phenotypic variance (Dudley and Moll, 1969). This estimate gives plant breeders an understanding to what extent a trait is influenced by the genotype as opposed to the environment.

Along with heritability estimates, understanding the magnitude of genotype-by-environment (G × E) interaction of the trait being studied is critical in developing an effective breeding program. The larger the G × E interaction, the less correlation there is between the genotype and the phenotype, which reduces the effectiveness of selection (Comstock and Moll, 1963). Stability analysis is a method to evaluate the performance of genotypes over multiple years and locations. By identifying stable genotypes in preliminary evaluations, those that show a minimum interaction with the environment will lead to an increase in the number of stable genotypes used in advanced testing (Eberhart and Russell, 1966).

There are several definitions of stability that can be found throughout the literature. Authors have classified a genotype as stable if the response of the genotype over several environments was equivalent to that of the mean response of all genotypes in the trial (Shukla, 1972), equivalent to the best performing genotype in each environment (Lin and Binns, 1988), or significantly greater than the mean response of genotypes at each location (Casler et al., 2001). Other authors have used ranking systems to determine if a genotype is stable over multiple environments (Fox et al., 1990; Kang and Pham, 1991). Each stability statistic interprets the G × E interactions differently; therefore, it is up to the plant breeder to determine what method will provide the most relevant information to accomplish their breeding objectives.

Two hundred thirty tall fescue genotypes were selected for evaluation in this study. The genotypes were randomly selected from plants growing at the Rutgers Plant Biology and Pathology Research and Extension Farm in Freehold, NJ, and consisted of experimental breeding material and germplasm recently collected from Europe. In the summer of 2004, a single tiller was removed from each of the 230 genotypes. Each tiller was then transplanted into a 5.1 × 5.1-cm cell filled with BX potting media (Pro-Mix HP; K.C. Shafer, York, PA) and placed in a greenhouse for optimum growing conditions. In the fall of 2004, each genotype had increased to a sufficient size and was then divided into 12 separate vegetative replications remaining under greenhouse conditions through the fall and winter.

In April 2005, field studies were established at two locations. Site 1 was located at the Horticultural Research Farm II in North Brunswick, NJ, and Site 2 was located at the Rutgers Plant Biology and Pathology Research and Extension Farm in Freehold, NJ. The field trial at Site 1 was located in a field bordered on the eastern side by a row of trees and a wood line on the southern side. The soil type was a Nixon loam (fine-loamy, mixed, mesic Typic Hapludult). The field trial at Site 2 was located in an open field with no physical barriers within close proximity; the soil type was a Freehold sandy-loam (fine-loamy, mixed, active, mesic Aquic Hapludult). Each field experiment was arranged in a randomized complete block design with six replications. To prepare each site, the existing turf (Perennial ryegrass Lolium perenne L.) was sprayed with glyphosate in the fall of 2004 and the dead plant material was not removed from the field before transplanting. The plants were transplanted into the field 31 cm apart. Plants at both sites were mowed two times per week during the growing season at a height of 6.4 cm and each experimental turf area received ≈14 g·m−2 N annually in 2005 and 2006.

All data analysis was conducted on percent disease using the average of the rating dates from each year. Brown patch disease data collected from the two locations over 2 years were subject to analysis of variance. The analysis of variance was generated by PROC GLM (SAS Institute, Cary, NC) as a result of an unbalanced data set. Broad-sense heritability estimates were determined from restricted maximum likelihood variance and covariance components using the random model PROC MIXED (SAS Institute). All effects were considered random because locations were not chosen with respect to specific ecological properties, years were not chosen with respect to expected climatic conditions (Gordon et al., 1972), and no information on disease resistance of tall fescue clones was known before the initiation of the study. Heritability was calculated on a clonal mean (Hc) basis as well as on a single-plant basis (Hsp). The formulas are as follows:

Analysis of variance of percent brown patch disease among tall fescue clones over two locations and 2 years resulted in all major effects and clone × environment interactions being significant (Table 1). Average percent brown patch disease severity in 2005 was 45% (Site 1) and 44% (Site 2). Disease averages decreased in 2006 to 41% (Site 1) and 34% (Site 2). Differences in disease severity observed between locations can be attributed to different environmental conditions at each site. The field trial at Site 1 was bordered by trees and shrubs on the eastern and southern sides, which may have led to a decrease in air movement, possibly resulting in prolonged leaf wetness. This resulted in increased disease pressure as opposed to the field trial at Site 2 that was planted in an open field, allowing for ample air circulation. Significant differences in disease severity over years may have been caused by fluctuation in relative humidity and rainfall events.

Analysis of variance of brown patch disease severity of 230 tall fescue clones averaged over two locations and 2 years (2005 and 2006).

Significant differences in brown patch resistance were observed among the different tall fescue genotypes evaluated in this study with the average percent disease over two locations and 2 years ranging from 21% to 60% (Fig. 1). No discrete reaction classes of susceptibility or resistance were observed; rather, there was a continuous distribution of responses to brown patch (Fig. 1). Some clones displayed moderate levels of resistance across multiple environments but no clone exhibited complete resistance. The lack of complete resistance, the observation of a continuous distribution of phenotypes, and the high influence of the environment on disease severity suggests that brown patch resistance is quantitatively inherited (Poehlman and Sleper, 1995).

Although all clone × environment interactions were significant, the main effect of clone had the largest variance component, illustrating there is a genetic component to resistance (Table 1). By using clonal replications to calculate heritability and evaluating them over multiple years and locations, we are able to account for the significant clone × environment variance and remove it from the total genetic variance (Burton and Devane, 1953). If the clones were only evaluated in one location over 1 year, the heritability estimate would be biased upward because the underlying clone × environment variance would not be detected (Dudley and Moll, 1969). 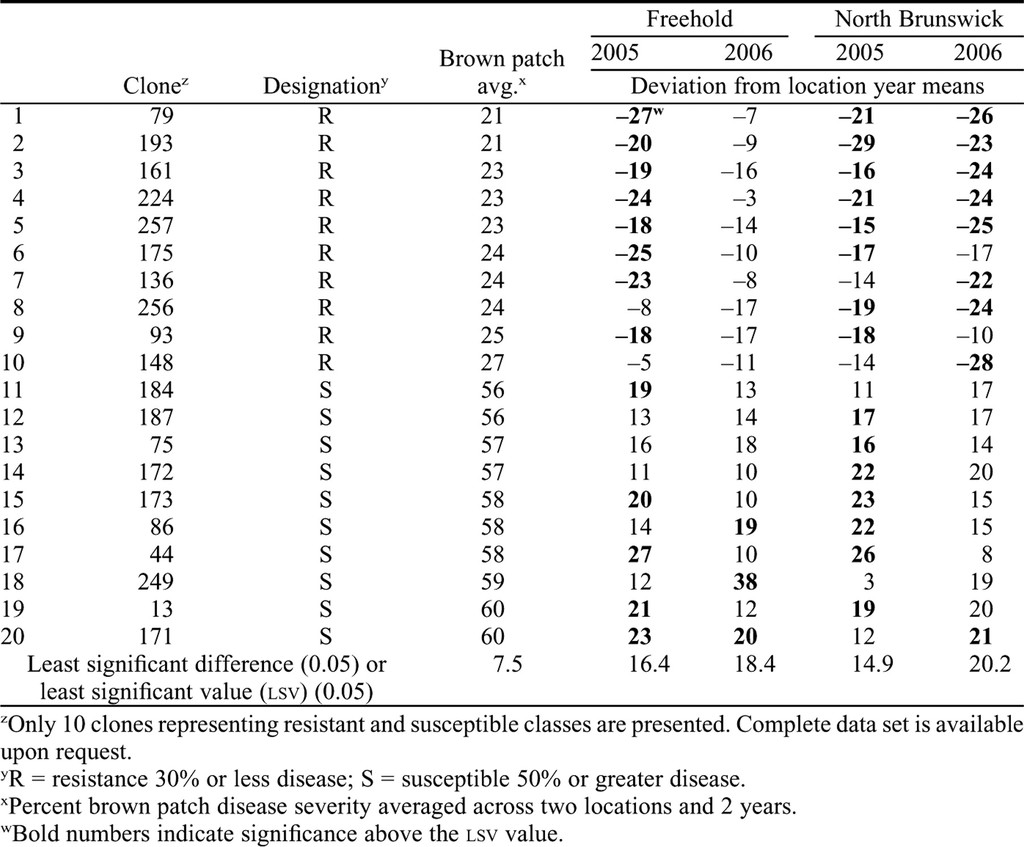 Number of clones at each location that were significantly different from location mean using the least significant value for comparison (P < 0.05). 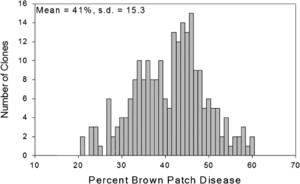