Lettuce (Lactuca sativa L.) is the leading leafy vegetable worldwide with an estimated annual production of 23 × 106 t in 2007 (Food Agriculture Organization of the United Nations, 2007). The most widely used lettuce types are classified into the following groups: butternut (head or cabbage), cos (cos or romaine), cutting (curled or leaf), and stalk (asparagus or stem) (Mansfeld, 2008). Over the past 7 years, the production of leaf and romaine lettuce has increased markedly (i.e., 86% and 74%, respectively) as a result of their quality, short production cycles, excellent postharvest shelf life, and nutritional attributes (Anonymous, 2007; Peirce, 1986). In Korea, leaf lettuce is commonly used as “wrap-up vegetable” with perilla (Perilla frutescens), kale (Brassica oleracea L. var. acephala), and pak-choi (B. rapa L. var. chinensis) (Park and Lee, 2006) and is commercially widely grown in greenhouses using hydroponic culture (Lee et al., 2006).

Taste and nutritional quality in lettuce are important attributes used by breeders, growers, and consumers (Tamaki et al., 1995). In Korea, bitterness is the single most important factor affecting purchase by consumers (Park and Lee, 2006). The primary bitter sesquiterpene lactones (BSLs) in lettuce and chicory (Cichorium intybus L.) are lactucin, 8-deoxylactucin, and lactucopicrin (Price et al., 1990; Tamaki et al., 1995; Van Beek et al., 1990). Their impact on taste is the result of their concentrations and low bitter thresholds (Van Beek et al., 1990). In lettuce and chicory, BSL concentrations are known to vary among cultivars (Price et al., 1990), e.g., the concentrations of lactucin-like sesquiterpene lactones and lactucopicrin in 13 chicory root cultivars ranged from 136 to 310 and 62 to 254 mg·kg−1 fresh weight, respectively (Peters et al., 1997). As a result of their bitterness, when the concentration is sufficiently high in chicory, consumer preference is markedly reduced (Drewnowski and Gomez-Carneros, 2000). Differences in sesquiterpene lactones in lettuce can also strongly modulate taste and consumer acceptance (Hance et al., 2007). As a result of the importance of these compounds in consumer acceptance and plant breeding, the composition of BSLs was measured and their contribution to bitterness determined in 10 popular Korean leaf lettuce cultivars.

Ten leaf lettuce cultivars (four green- and six red-leafed) that are popular in Korea (Table 1) were grown in the Gyeonggi-do Agricultural Research and Extension Services greenhouses (long. 36° N, lat. 126° E), Hwasung, South Korea, in 2001. The cultivars were seeded 8 June on a urethane sponge and the seedlings transplanted to a deep flow culture system 29 June arranged in a randomized block design with three replications of 10 plants. During growth, Yamazaki nutrient solution for lettuce was used (Yamazaki, 1982). The concentrations of macronutrients (NO3-N, NH4-N, PO4-P, potassium, calcium, magnesium, and SO4-S) were 6, 0.5, 0.5, 4, 1, 0.5, and 0.5 mm, respectively, and the concentrations of micronutrients (iron, boron, manganese, zinc, copper, and molybdenum) were 35, 18, 3.6, 0.3, 0.2, and 0.1 μM, respectively. The electrical conductivity and pH of the solution were measured daily and the nutrient solution replaced weekly. The plant leaf samples were harvested on 23 Aug. To test the effect of leaf location on the plant, basal leaves were also collected on 6 Sept. and midstalk and flower stalk leaves collected 12 Oct. Harvest dates were varied to allow for obtaining leaves of similar quality at each position on the plant. Midstalk samples were harvested from between leaves 15 and 20 from the base of the plant and flower stalk samples from between leaves 50 and 55 from the bottom. The samples were mixed, placed in vinyl freezer bags, and held at –80 °C. The frozen samples were subsequently lyophilized for 48 h using a vacuum freeze-drier (PVTFD100A; Ilshin Laboratory Co., Yangju, Korea). The freeze-dried samples were ground to a fine powder using a mortar and pestle and held at –80 °C until analysis. Chlorophyll content was estimated using SPAD units (leaf chlorophyll index) obtained with a SPAD-502 chlorophyll meter (Konica Minolta Sensing Inc., Osaka, Japan), and sugar content was determined using a PR32 refractometer (Atago Co., Tokyo, Japan).

The samples were analyzed using the method of Price et al. (1990) in which powdered lyophilized aliquots (1 g) were extracted with 100 mL of methanol by boiling under reflux at 65 °C for 1 h and filtered through Whatman #2 filter paper. The methanol was evaporated under reduced pressure in a rotary evaporator (≈5 mm Hg, 30 to 35 °C). The sesquiterpene lactone santonin (50 μg) was added as an internal standard to the crude extract as a result of its similar structure (C15H18O3) and molecular weight (246.29) to two of the BSLs [lactucin (C15H16O5, 276.3), 8-deoxylactucin (C15H16O4, 260.3), lactucopicrin (C23H22O7, 410)]. The extract was then partitioned three times between water/chloroform (200 mL; 1:1 mixture by volume) with the chloroform separated, dried over anhydrous magnesium sulfate, and evaporated using a rotary evaporator (≈5 mm Hg, 20 to 30 °C). The residue was dissolved in 0.5 mL methanol/chloroform (1:2 by volume) and the BSLs separated using high-performance liquid chromatography (HPLC) and monitored at 256 nm.

The bitter sesquiterpene lactones were separated using a HP 1100 series HPLC system (Hewlett-Packard Co., Palo Alto, CA) equipped with an AD 25 Absorbance Detector (Dionex Co., Sunnyvale, CA). A Luna C18 column (250 × 4.6 mm i.d., 5-μm particles; Phenomenex Co., Torrance, CA) was used with a water/acetonitrile mobile phase at a flow rate of 1 mL/min. The solution gradient started at 90:10 (by volume) and was altered in a linear manner to a final ratio of 58:42 over 30 min. The BSLs (i.e., lactucin, 8-deoxylactucin, and lactucopicrin; Fig. 1) were monitored at 256 nm.

Bitter activity values were calculated by dividing the concentration of each BSL by its bitter threshold in water as measured by Van Beek et al. (1990).

The concentration of each BSL and the total concentration varied widely among cultivars (Table 2). The cultivar effect was highly significant as was the effect for leaf color (i.e., green versus red) and morphology (i.e., cut versus curled leaves). In particular, the concentration of the BSL and the total in red-colored and curled leaf cultivars were significantly higher than green and cut leaf cultivars. The results substantiated the degree of genetic variation in BSLs within lettuce and chicory germplasm reported by Price et al. (1990). In addition, environmental (e.g., location, planting date) and postharvest (e.g., harvest date, temperature) factors are also known to affect the level of BSLs in forage chicory cultivars (Foster et al., 2006). The concentration of anthocyanin in red-leafed cultivars also varied as a result of genetic and environmental factors (Gazula et al., 2007). Based on the existing evidence, the synthesis of anthocyanins and BSLs appeared to be related to some extent. 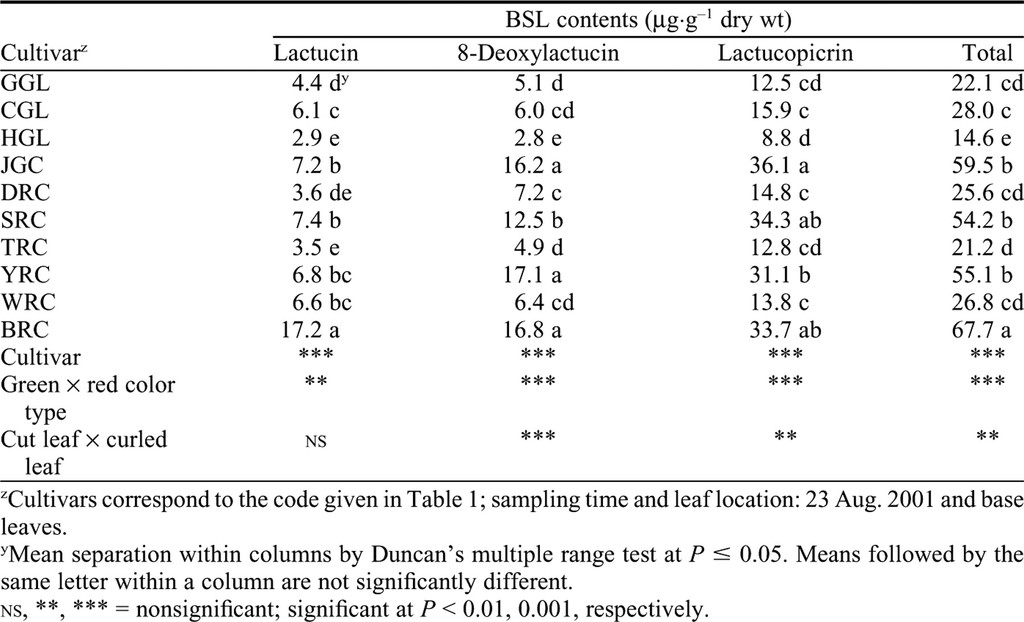 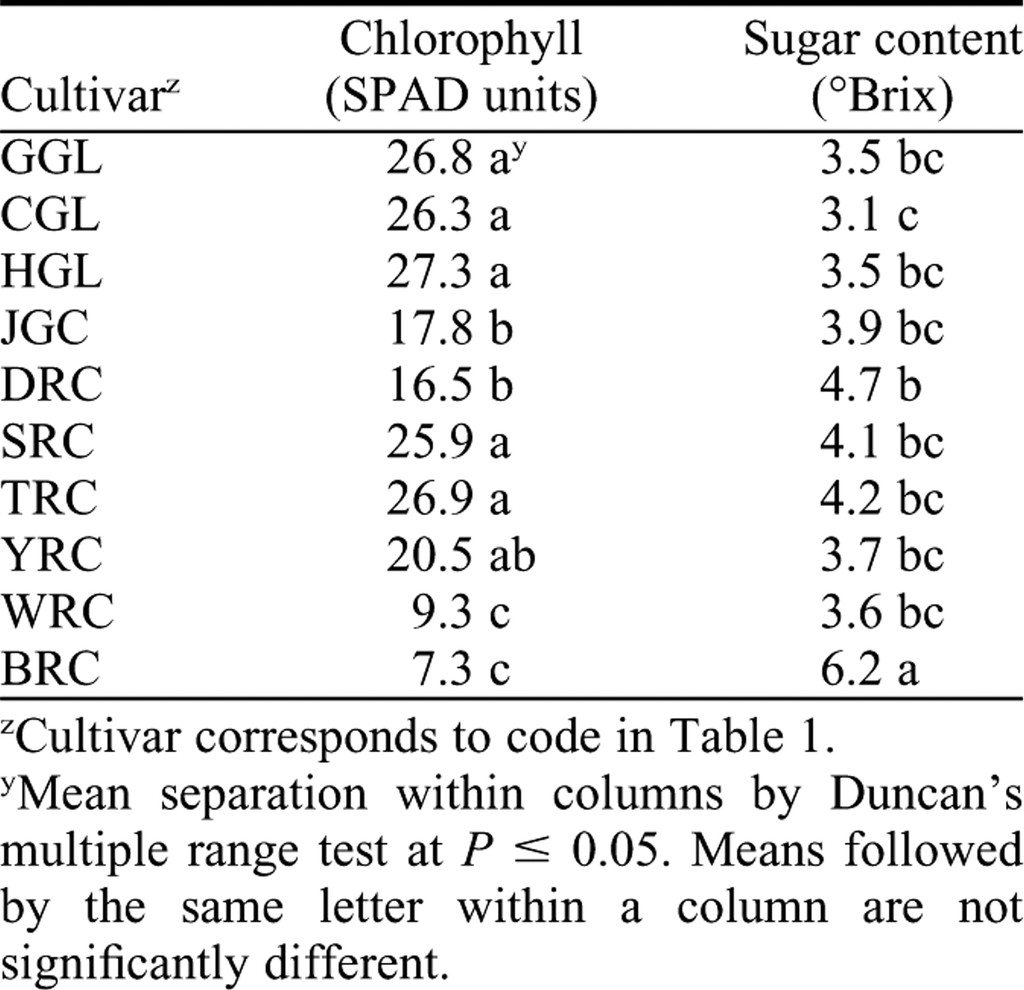 The bitter activity values, obtained by dividing each BSL's concentration by its bitter threshold, were used to assess the relative importance of individual BSL and the overall bitterness (Table 4). The method is based on the principle of odor activity value that is commonly used for quantifying individual odors in aroma and flavor chemistry research (Reineccius, 2006). Based on data by Van Beek et al. (1990), the threshold values in water for lactucin, 8-deoxylactucin, and lactucopicrin were 1.7, 1.1, and 0.5 μg·g−1. Lactucopicrin with the lowest threshold value is the most bitter of the three compounds. It comprised over 72% of the total of the three compounds of the bitterness activity value across cultivars. Lactucopicrin is the major contributor to bitterness in lettuce as a result of its concentration and low bitterness threshold and is also the primary contributor to bitterness in chicory (Foster et al., 2006). On the basis of bitterness activity values, BRC (92.8) and JGC (91.2) were the most bitter followed by SRC (84.3) and YRC (81.7). CGL (40.8), DRC (38.3), WRC (37.3), GGL (32.2), and TRC (32.1) were classified as having intermediate bitterness and HGL (21.9) was the least bitter. Leaf lettuce is generally considered to be more bitter than other types of lettuce (e.g., head, romaine) and bitterness in chicory and endive is two to three times higher than in lettuce (Price et al., 1990).

Bitterness of leaf lettuce cultivars based on bitter activity values. 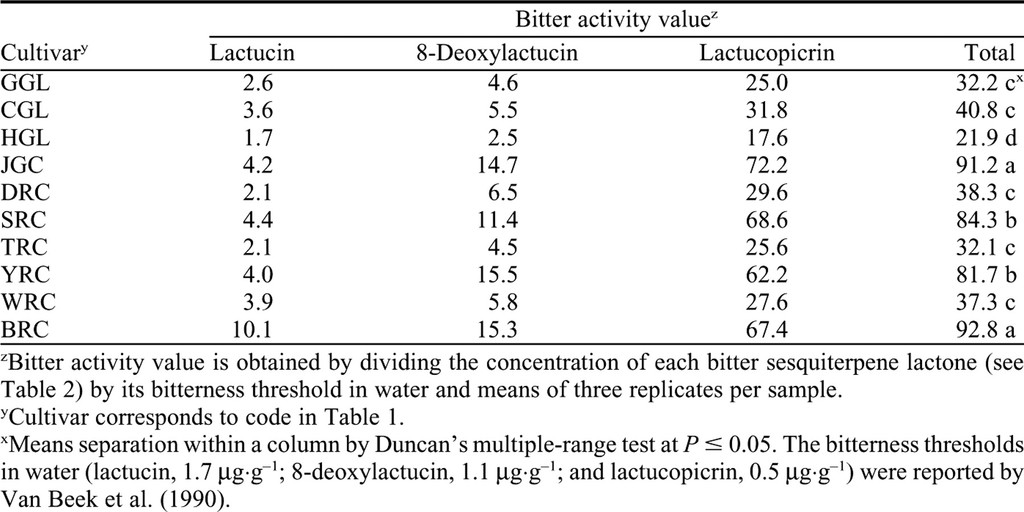 The concentration of the primary BSLs in lettuce (i.e., lactucin, 8-deoxylactucin, and lactucopicrin) varied quantitatively as a result of cultivar and leaf position on the plant. Among the three BSLs, lactucopicrin represents the best indicator of the overall bitterness of a lettuce cultivar as a result of its higher concentration and lower bitterness threshold value.