The almond (Prunus amygdalus Batsch) breeding program of the Centro de Investigación y Tecnología Agroalimentaria of Aragón aims to develop new self-compatible and late-blooming cultivars to solve the main problem detected in Spanish almond growing, its low productivity, as a result of the occurrence of frosts at blooming time or later and to a deficient pollination (Felipe, 2000). The first three cultivars released from this breeding program were Aylés, Guara, and Moncayo (Felipe and Socias i Company, 1987), ‘Guara’ having represented more than 50% of the new almond orchards in the last years (MAPA, 2002). Later, three more cultivars were registered in 1998, Blanquerna, Cambra, and Felisia (Socias i Company and Felipe, 1999), ‘Blanquerna’ being of very good productivity and kernel quality, and ‘Felisia’ of very late blooming time (Fig. 1). Two more cultivars, Belona and Soleta, were registered in 2005 (Socias i Company and Felipe, 2007) characterized by their high kernel quality and considered possible commercial substitutes for the two preferred cultivars in the Spanish market, Marcona and Desmayo Largueta. The last release from this breeding program is ‘Mardía’, recently registered because of its good horticultural and commercial traits.

Blooming time has been a very important evaluation trait. As an average, its blooming time is 25 d later than ‘Nonpareil’, 20 d after ‘Guara’, and 13 d after ‘Felisia’, the latest blooming cultivar released so far (Fig. 1). The consistent late blooming time is the result of very high chilling and heat requirements (Alonso and Socias i Company, 2008; Alonso et al., 2005), much higher than in any other almond genotype (Table 1). Flowers are of small size and white with epistigmatic pistil both on spurs and on 1-year shoots. Bloom density is regular and high (Kodad and Socias i Company, 2008b).

Chilling and heat requirements of ‘Mardía’ as related to other cultivars.z 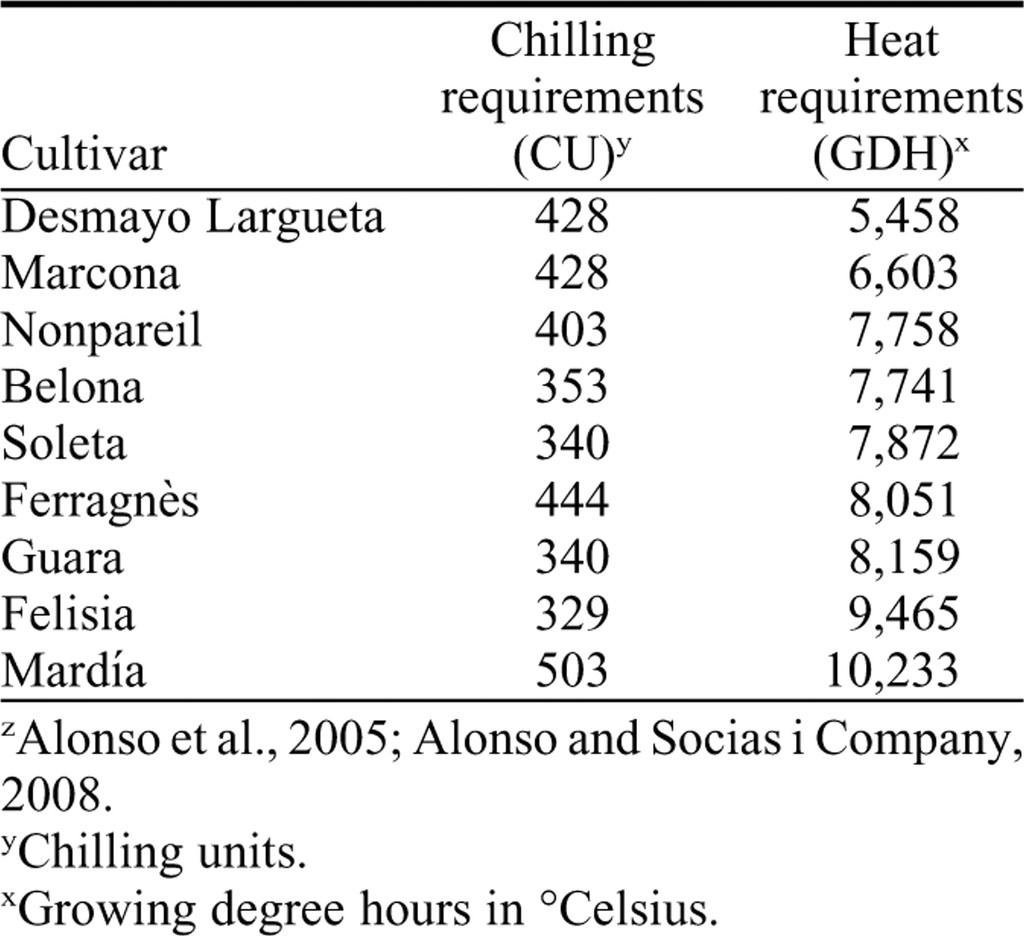 Self-compatibility was tested as soon as the original seedlings produced the first flowers by examining the arrival or not of pollen tubes at the ovary after self-pollination (data not shown). Sets after self-pollination and autogamy were studied on three grafted trees of each selection during several years as a result of the large variability found between years in field trials for fruit set (Socias i Company et al., 2005). Average set after artificial self-pollination was 17.9%, higher than after crosspollination, 15.7%, showing a good self-compatible behavior, although this difference was not statistically significant. Average set in bagged branches was 9.8%, higher than the threshold of 6% indicated by Grasselly et al. (1981) for autogamy, and 23.7% for open pollination. These sets (Kodad and Socias i Company, 2008a) are lower than those considered for a commercial crop in Californian cultivars (Kester and Griggs, 1959), but ensure a good crop level because of the high bloom density of this selection, resulting in high productivity (Kodad and Socias i Company, 2006). Its S-allele genotype has been determined as S6Sf (Kodad and Socias i Company, 2008a).

Field behavior has been evaluated with three grafted trees in an experimental plot and in three external trials. One on the most important points considered was the behavior in relation to spring frost injury. Especially important were the observations in 2003 and 2004 with severe frosts in most almond-growing regions of Spain. Whereas cultivars considered as resistant to frosts such as Guara (Felipe, 1988) sustained important yield reductions, ‘Mardía’, as a result of its extremely late blooming season, did not sustain any damage (Kodad and Socias i Company, 2005).

Tree training has been easy because of its slightly upright growth habit (Kodad and Socias i Company, 2008b) without the problem of bending branches of ‘Guara’. Thus, induction of lateral branching is recommended during the first years. Adult trees show an intermediate vigor and branching intensity as well as a good equilibrium between vegetative growth and production, thus allowing reduction of pruning. Field observations in the different locations showed its tolerance to Polystigma and other fungal diseases.

Ripening time is early, although later than in ‘Guara’, which allows the succession of harvest. Nut fall before harvest has been very low, but nuts fell easily when shaken. Yield rating has been slightly lower than for ‘Guara’ (7 versus 8 on a 0 to 9 scale).

The external trials have shown its good adaptation to different growing and weather conditions, maintaining a high level of bud density in all locations (Kodad and Socias i Company, 2008b). A trial in Aniñón (Zaragoza) at 730 m above sea level and of very cold climate has had good production even in years with late frosts. A trial in El Pinós (Alacant), at 575 m above sea level but with a milder climate, has shown their very good production as well as vegetation (G. Valdés, unpublished data). Blooming and ripening dates observed in these locations have been, as expected, earlier in El Pinós than in Zaragoza, but later in Aniñón.

The chemical composition of the kernels has been determined to establish their best use opportunities. The content in protein is medium and that of oil is high, similar to that of ‘Marcona’ (Table 2), a very interesting trait for “turrón” (nougat) production. The percentage of oleic acid, that of higher quality for fat stability and nutritive value in the lipid fraction, is especially high (Kodad and Socias i Company, 2008c), close to 75% (Table 2). The content in linoleic acid, of lower quality than the oleic acid, is low, showing a very high ratio of oleic/linoleic acids (4.5) as another index of high oil quality. The amount of tocopherol is lower than in other cultivars (Kodad et al., 2006), indicating the need for rapid processing of kernels after cracking.

Chemical composition of ‘Mardía’ as compared with other cultivars.

Roasting has been tested by the industry “Almendras Castillo de Loarre” for appetizer use. Behavior has been good, although less than in the favorite one in the Spanish market, ‘Desmayo Largueta’. Kernel taste, both raw and roasted, is excellent.

This cultivar has been presented to patent on 11 Dec. 2007 at the Spanish Registry of Protected Cultivars and is available to nurseries though provisional licenses by Geslive, A.I.E. (C. Juan de Mena 19-3°-D, 28014, Madrid, Spain).

Mean flowering time of ‘Mardía’ as related to other cultivars (7-year average). Percentages refer to the amount of flowers opened.

Nut and kernel of ‘Mardía’. 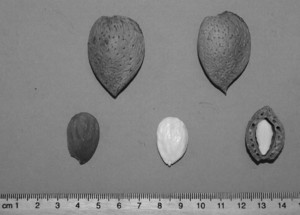