Caladiums (Caladium ×hortulanum Birdsey, Araceae Juss.) are ornamental aroids grown for their bright, colorful leaves. Their short forcing period, shade tolerance, and low maintenance requirements in the landscape make caladiums popular among pot-plant producers, homeowners, and landscapers (Evans et al., 1992; Harbaugh and Tjia, 1985). The majority of caladiums commercially produced in the world belong to the fancy leaf type, and the most popular color has been white (white center with green veins or white center with white veins). In surveys of Florida caladium growers, who supply more than 95% of the caladium tubers in the world market, white-colored cultivars account for greater than 35% of the caladiums the growers produce (Bell et al., 1998; Deng et al., 2005).

‘UF-331’ (Fig. 1) and ‘UF-340’ (Fig. 2) are two new white lance-leaved caladium cultivars with novel combinations of foliar characteristics. Leaves of ‘UF-331’ are characterized by large dark green veins and white interveinal areas, which result in an attractive coloration pattern. Although the white face with green veins is similar to the popular fancy-leaved caladium ‘Candidum Junior’ (and ‘Candidum’), ‘UF-331’ is the first lance-leaved cultivar with this pattern. ‘UF-340’ develops a large number of wide lance leaves with a large, bright, and pure white center surrounded by green margins. It is distinct from other white lance-leaved cultivars such as ‘Florida White Ruffles’ and ‘White Wing’ that have narrow, creamy white leaves. In addition, ‘UF-331’ and ‘UF-340’ have improved performance in container forcing and landscape use compared with other lance-leaved cultivars. Tuber yield of both cultivars was similar to or better than the currently available, commercial white lance-leaved cultivars. Both cultivars produce multibranched tubers that do not require de-eyeing, a time-consuming and costly practice for preparing caladium tubers for container forcing.

The ancestry of ‘Aaron’, ‘Candidum Junior’, and ‘Red Frill’ is unknown, although ‘Candidum Junior’ was suspected to be a field mutation of ‘Candidum’ (Wilfret, 1991a), a cultivar widely produced and used as a result of its unique venation/coloration pattern and good tuber yield. ‘Red Frill’ is known for its compact growth habit, multiple leaf development, and lance leaf shape. ‘Aaron’ has been a major white fancy-leaved cultivar because of its large white leaf center and high tuber yield.

Jumbo-sized tubers (6.4 to 8.9 cm in diameter) are multisegmented bearing four to seven dominant buds. Tuber surfaces are brown (RHS 200B) with the cortical area yellow–orange (RHS 15D). Leaves are lanceolate with a saggitate–cordate base and a broad acuminate tip slightly undulate with green (RHS 137A) penniform venation. The upper surface has dark green (RHS 139A) margins, 1 to 2 mm wide, bordering the entire leaf except for the basal leaf valley where it is gray–purple (RHS 187A). The leaf center is gray–purple (RHS 187A) and up to 20 mm. Leaves have a thick (3 to 5 mm wide) central main vein in dark green (RHS 137A) and numerous (up to 18) large veins (2 to 4 mm wide) in dark green (RHS 137A) radiating from the central vein. These large veins connect marginally with a thinner (1 to 2 mm wide) green vein (RHS 137A) that roughly parallels the leaf margins and a peripheral thin green (RHS 137B) vein. A small green (RHS 137B) vein is located between and parallel to the leaf margins and the peripheral vein. Netted secondary veins are green (RHS 137B). The interveinal area is variable, from white (RHS 155C) to red–purple (RHS 61D), depending on light conditions and leaf maturity, and the area is translucent, making the main veins very prominent. Leaves have a large (≈2 cm) gray–purple (RHS 178A) blotch at the petiole attachment covering a small portion of the central and large veins. The undersurface has narrow (1 to 2 mm) gray–green (RHS 191A) margins. Primary veins are gray–green (RHS 191). Interveinal areas are variable, gray–white (RHS 156) to red–purple (RHS 61D). Petioles are 3 to 5 mm thick and light brown (RHS 200D) at the apex, but the colors diffuse into a dark brown (RHS 200B) at the base that is ≈7 mm in diameter.

Plants grown for ≈4 months in full sun in ground beds had an average height of 27 cm. The largest leaf on plants grown in a 45% shaded greenhouse produced from an intact No. 1 tuber in an 11.4-cm pot averaged 19 cm long and 13 cm wide 10 weeks after planting. When grown from 2.54-cm tuber propagules in ground beds with full sun, leaves averaged 22 cm long and 12 cm wide 4 months after planting.

Jumbo-sized tubers are multisegmented, bearing five to nine dominant buds. Tuber surfaces are brown (RHS 200C) with the cortical area yellow–orange (RHS 10C). Leaves are saggittate-cordate, 15 to 21 cm long and 10 to 15 cm wide, and very slightly undulate with a white (RHS 155D) penniform venation. Two lobes are up to one-third of the leaf length. The upper surface has green (RHS 138A) margins, to 10 mm wide, bordering the entire leaf except for the basal leaf valley formed by the two lobes where it is gray–purple (RHS 185B). The central and main veins are white (RHS 155C). Interveinal areas are white (RHS 155B) except for the areas near the margins, where irregular light green (RHS 136C) mottling is present. A 1- to 2-mm gray–purple line (RHS 185B) is present on the basal leaf collar at the petiole apex. The undersurface has gray–green (RHS 191A) margins, up to 10 mm wide, and a white (RHS 155D) center and light green (RHS 130D) central and main veins. Secondary veins are light green (RHS 130D) and netted. Petioles are 3 to 5 mm thick and green (RHS 191C) at the apex, but the colors diffuse into a dark brown (RHS 200A) at the base that is ≈6 mm in diameter.

Plants grown for ≈4 months in full sun in ground beds had an average height of 27 cm. The largest leaf on plants grown in a 45% shaded greenhouse produced from an intact No. 1 tuber in an 11.4-cm pot averaged 19 cm long and 13 cm wide 8 weeks after planting. When grown from 2.54-cm tuber propagules in ground beds with full sun, leaves averaged 18 cm long and 13 cm wide 4 months after planting.

Field plots were organized in a randomized complete block design consisting of three replications, and each plot contained 30 propagules. ‘Florida White Ruffles’, ‘White Wing’ (the two major white lance-leaved cultivars), and ‘Candidum Junior’ (a semidwarf, fancy-leaved cultivar that had a similar venation and coloration pattern) were included in the field trials as controls or checks. To compare the performance (tuber weight, number of marketable tubers, and production index) of ‘UF-331’ and ‘UF-340’ with the controls, an analysis of variance was conducted using the GLM procedure in the SAS program followed by mean separation by Fisher's least square difference at P = 0.05 (SAS Institute, 2003).

‘UF-331’ was significantly taller (5 to 11 cm) and developed significantly larger (4 to 7 cm longer and 2 to 6 cm wider) leaves than ‘Florida White Ruffles’ and ‘White Wing’ (Table 2). ‘UF-331’ performed much better than ‘White Wing’ during the whole growing season with much fuller plants and better color display. Compared with ‘Florida White Ruffles’, the performance ratings of ‘UF-331’ were higher, but the difference was significant only in the early season (July ratings). ‘UF-331’ had good tolerance to sunburn during the whole growing season and showed little leaf tissue damage, resulting in the highest ratings.

The suitability for container forcing was evaluated by forcing tubers in 11.4-cm containers. No. 1 tubers were planted either intact or de-eyed in a peat/vermiculite mix (VerGro Container Mix A; Verlite, Tampa, FL) on 26 Mar. 2007. The study was conducted in a greenhouse with 45% light exclusion during the summer in Wimauma, FL. Average daily temperatures ranged from a low of 16 °C night to 29 °C day during the experiment. Potted plants were arranged on metal benches in the greenhouse. Plant height, number of leaves, and foliar characteristics were recorded 8 to 10 weeks after planting. The experiment was a randomized complete block design with 10 replications. ‘Florida White Ruffles’, ‘White Wing’, and ‘Candidum Junior’ were included as controls. An analysis of variance and mean separation were conducted using the GLM procedure in the SAS program to compare the performance of ‘UF-331’ and ‘UF-340’ with the controls.

Plant performance for caladium cultivars grown from No. 1 tubers in 11.4-cm containers in a 45% shaded glasshouse, 2007, Wimauma, FLz.

‘UF-340’ sprouted in 26 d (intact) to 28 d (de-eyed) after planting, significantly earlier (4 to 7 d) than any of the controls, regardless of tuber treatments (Table 3). ‘UF-340’ was similar to ‘Florida White Ruffles’ and ‘White Wing’ in height when tubers were intact or de-eyed. Surprisingly, de-eyed plants of ‘UF-340’ were taller than de-eyed ‘Candidum Junior’. ‘UF-340’ produced a similar number of leaves as ‘Florida White Ruffles’ and ‘Candidum Junior’, but nearly twice as many leaves than all three controls when tubers were de-eyed. ‘UF-340’ produced high-quality plants in small pots (11.4 cm in diameter) even without de-eyeing (Table 3). When tubers were de-eyed, ‘UF-340’ yielded pot plants of even higher quality with plant quality ratings greater than the three controls.

Both ‘UF-331’ and UF-340' are intended for use in containers and landscapes. Their performance was outstanding both in pots and landscapes and superior to ‘Florida White Ruffles', ‘White Wing’, and ‘Candidum Junior’, cultivars that have a leaf color and pattern that is closest of all cultivars that we are aware of in the commercial trade. De-eyeing is not required for either cultivar but can help produce a shorter potted plant with more leaves. In planning for tuber forcing, it may be necessary to plant ‘UF-331’ 2 weeks early, because it sprouts ≈2 weeks later than most commercial cultivars. ‘UF-331’ can do well in sunny or shady landscape locations, but ‘UF-340’ performs better in partially shady locations. Although extensive research and evaluations of these cultivars have been performed on small acreages, tuber producers are encouraged to plant only limited quantities of ‘UF-331’ and ‘UF-340’ until they have gained experience in producing these cultivars. Standard postharvest treatment of tubers is recommended (Harbaugh and Tjia, 1985) and preplant hot water treatment of tubers (Rhodes, 1964) is encouraged to prolong their life.

The caladium cultivars UF-331 and UF-340 will be sold and marketed under the trade name Angel Wing Dwarf Tricolor and Angel Wing Dwarf White. A plant patent application will be submitted to the U.S. Patent and Trademark Office and plant patent rights assigned to the University of Florida, Board of Trustees. Propagation and distribution will be licensed by the Florida Foundation Seed Producers, Inc., P.O. Box 110200, Gainesville, FL 32611. Information on tuber availability and propagation agreements can be obtained from the Florida Foundation Seed Producers, Inc. 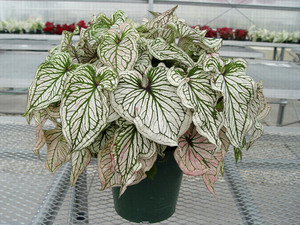 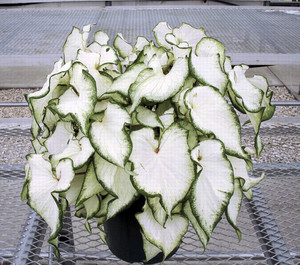