‘Suok’ (‘Kyoho’ × ‘Beniizu’) is a tetraploid (4×) table grape cultivar showing large berries with high quality. ‘Suok’ has a mean bud burst on 17 Apr., flowering on 31 May, and fruit maturity on 15 Sept. The mean berry weight is 10.9 g, and mean soluble solids are 18.5 °Brix. The skin color is black with abundant bloom and the flesh is soft and juicy.

‘Suok’ resulted from a cross between and ‘Kyoho’ (4×) and ‘Beniizu’ (4×) with the intention of producing high-quality table grapes with the taste of ‘Kyoho’ at the National Horticultural Research Institute (NHRI), RDA, Korea, in 1992 (Fig. 1). It was preliminarily selected in 2000, tested in seven sites from 2001 to 2004 as ‘Wonkyo RA-18’, and named in 2004. Three randomized vines were planted and tested to evaluate characters of vines and fruit production in each site for 4 years.

Flowers of ‘Suok’ are perfect and self-fertile, blooming at midseason (on 31 May in Suwon, Korea) after midseason bud break (17 Apr.).

Fruits of ‘Suok’ have black–blue skin when fully ripened. Fruits are large in size averaging 10.9 g, similar to ‘Kyoho’, and are round to slightly ovate. When the grapes are fully ripened, the aroma of ‘Suok’ is very similar to that of ‘Kyoho’ with a pronounced foxy flavor. ‘Suok’ ripens between 22 Sept. and 25 Sept. in Suwon, Korea, 8 d later than ‘Kyoho’. It is considered a late-season cultivar. The mean total soluble solids (TSS) of ‘Suok’ are 18.5 °Brix, ≈2.1 °Brix higher than ‘Kyoho’, and pH is usually similar to ‘Kyoho’ (Table 1). The balance between sugar (18.5 °Brix) and acidity (0.62% titratable acidity, pH 3.12) is excellent. These indicate that ‘Suok’ can accumulate satisfactory amounts of sugar while maintaining sufficient acidity. Its berry has two to four seeds of 8.0 mm in length, and its skin is slip, pulpy, and medium in thickness. The flesh texture is soft and juicy. ‘Suok’ is a late-season grape variety, which produces fruits with long shelf life compare with ‘Kyoho’. It is possible to produce seedless berries by the gibberellic acid treatment (25 ppm in full bloom) in ‘Suok’, like in ‘Kyoho’.

Fruit characteristics of grape cultivar Suok and its parent ‘Kyoho’.

The clusters of ‘Suok’ are large in size (400 to 450 g with 35 to 40 berries each), conical, and sometimes shouldered. The berries are set very tightly with no shattering, which causes their low marketability with bad appearance of clusters in ‘Kyoho’ grape. The cluster appearance is excellent with a uniform shape and black skin color (Fig. 2).

Own-rooted vines are vigorous and more productive than 20 Mt·ha−1 in total yield than ‘Kyoho’ (18 Mt·ha−1) in randomly designed blocks. Vines show uniform clusters in size and ripening period with excellent berry setting by cane pruning. Vines are moderately hardy to cold with 40% to 50% survival of buds at –20 °C in Suwon, Korea.

The foliage is moderately susceptible to anthracnose (Elsinoe ampelina Shear) and downy mildew (Plasmopara viticola Berl. & de Toni). However, the trunk is moderately resistant to crown gall (Agrobacterium vitis). After fruit harvest, it is required to keep as many healthy leaves as possible on the vines to maintain sufficient nutrient for good plant growth in the next year. Although own-rooted vines of ‘Suok’ grape were cultivated in the vineyard, they were not infested with phylloxera owing to low risk for natural attacks by them in the soil in Korea.

‘Suok’ is a table grape with large berries, which produce fruits with pronounced varietal characteristics similar to ‘Kyoho’, one of its parents. ‘Suok’ is distinguished by its superior fruit quality combined with good productivity and partial resistance to crown gall disease superior to its acclaimed parent, ‘Kyoho’. ‘Suok’, which means “excellent gem” in Korean, is the eighth table grape cultivar named by NHRI. It follows the release of ‘Cheongsoo’ (Lee et al., 1994), ‘Hongdan’ (Suh et al., 1995), ‘Tamnara’ (Park et al., 2004a), ‘Heukgoosul’ (Park et al., 2004b), ‘Hongisul’ (Park et al., 2006a), ‘Heukboseok’ (Park et al., 2006b), and ‘Jinok’ (Yun et al., 2008). ‘Suok’ may be used as a substitute for ‘Kyoho’ in grape cultivation in Korea as a result of its large-sized berries with high quality and several characteristics for facilitating vineyard management such as excellent coloring of skins and easy bearing habit.

Requests for cuttings for research purposes may be addressed to Haekeun Yun (hekeun@rda.go.kr). Vines are available for sale at the Korean Society for Fruit Tree Nursery (4-38 Seonghwang-dong Cheonan, 330-130, Korea). 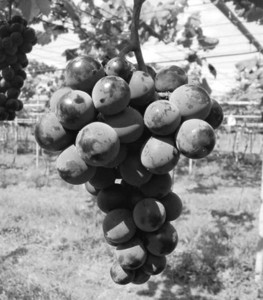