Caladiums [Caladium ×hortulanum Birdsey, Araceae Juss.] are ornamental aroids widely used as pot and landscape plants for their colorful foliage and ease in growing (Evans et al., 1992; Harbaugh and Tjia, 1985). Tens of millions of caladium tubers are used annually by the worldwide ornamental industries with 70% to 80% forced in containers and 20% to 30% directly planted in the landscape. More than 95% of the tubers used worldwide are produced in central Florida.

Based on leaf shape (fancy or heart-shaped and lance) and predominant leaf color (white, red, pink, and multicolored), commercial caladium cultivars are often separated into eight groups (Bell et al., 1998; Wilfret and Hurner, 1982). Historically, fancy-leaved caladium cultivars have dominated the market. However, during the past two or three decades, the demand for lance-leaved cultivars has increased steadily; growers producing tubers planted greater than 50% more acres of lance-leaved cultivars in 2003 than in 1998 (Bell et al., 1998; Deng et al., 2005).

Native to the New World's tropical region, caladiums inherently are very susceptible to injury by low temperatures. Chilling injury (CI) can occur to caladium leaves when temperatures are 15.5 °C or lower (Harbaugh, 1990). This sensitivity to low temperatures can lead to increased production costs for heating in greenhouse production of potted caladium plants and restricts geographic and seasonal use of caladiums in the landscape.

In recent years, there has been considerable interest in developing new caladium cultivars resistant to CI. Toward this objective, the University of Florida's Institute of Food and Agricultural Sciences caladium breeding program released ‘Florida Red Ruffles’. This cultivar develops multiple vibrant red leaves and is much improved in tuber yield and resistance to CI compared with other commercial lance-leaved cultivars. It has become the new standard for red lance-leaved caladium cultivars.

‘UF-404’ is an attractive, new red lance-leaved cultivar with a novel coloration pattern (bright red with white blotches scattered between main veins) (Fig. 1). It has been similar or superior to ‘Florida Red Ruffles’ in tuber yield, pot plant quality, and landscape performance. With numerous brightly colored, wide, and lance-shaped leaves that are resistant to sunburn, ‘UF-404’ is well suited for forcing in various size containers, for producing hanging baskets, and for planting in sunny or shady landscape locations. Its tubers are well branched and do not require de-eyeing for forcing in small- or medium-sized pots (11.4 to 15.3 cm) (Fig. 1), and its leaves are more resistant to CI than leaves of ‘Florida Red Ruffles’.

‘UF-404’ was developed from a 2003 cross between ‘Florida Blizzard’ (Harbaugh et al., 2002) and ‘Florida Red Ruffles’ (Wilfret, 1991) (Fig. 2) and initially selected as GCREC-3270 in 2004. ‘Florida Blizzard’ was used as the female parent for its plant vigor, unique leaf coloration pattern, and high tuber yield, whereas ‘Florida Red Ruffles’ was used as the male parent for its bright color, compact growth habit, excellent sunburn tolerance, and chilling resistance. ‘Florida Blizzard’ was developed from a cross between ‘Aaron’ and ‘White Christmas’ and was released for commercial production in 2002. ‘Florida Red Ruffles’ resulted from a cross between ‘Red Frill’ and a progeny of ‘Red Frill’ × ‘Candidum Junior’. The ancestry of ‘Aaron’, ‘Candidum Junior’, ‘Red Frill’, and ‘White Christmas’ is unknown.

‘UF-404’ plants grown for ≈4 months in full sun in ground beds had an average height of 27 cm. Jumbo-sized tubers (6.4 to 8.9 cm in diameter) are multisegmented, bearing four to seven dominant buds. Tuber surfaces are brown (RHS 200C) with the cortical area yellow–orange (RHS 10C). Leaves are sagitate–cordate, up to 25 cm long and 18 cm wide, and slightly undulate with two lobes one-seventh to one-eighth of the leaf length. The upper surface has dark green (RHS 136B) margin, up to 10 mm wide, bordering the entire leaf except for the basal leaf valley where it is grayed-green (RHS 194B). The central and main veins are grayed-purple (RHS 185B) and often connect marginally with a thin (less than 1 mm wide) grayed-purple vein (RHS 184A) that parallels the leaf margin. Interveinal areas are variable in color, gray–purple (RHS 184C) near the leaf center to yellow–green (RHS 147), grayed-orange (RHS 166A) toward the margin, and have irregular blotches variable in color, from yellow–white (RHS 158C), to red (RHS 54D), or red–purple (RHS 65D), occurring on up to 85% of the leaf blade and marginal area. The undersurface has a yellow–green (RHS 147B) margin, up to 15 mm wide, and red–purple (RHS 59D) veins. The central and main veins are covered with grayed-white (RHS 155B) wax. Interveinal areas are variable in color and have irregular blotches, variable in color, occurring on up to 85% of the center and marginal area. Petioles are 3 to 5 mm and grayed-purple (RHS 187A) at the apex, and the colors diffuse into a dark grayed-purple (RHS 187A) at the base that is ≈7 mm in diameter. The upper portion of the petiole below the apex is covered with gray–white wax (RHS 155B).

The largest leaf on plants grown in a 45% shaded greenhouse produced from an intact number one tuber in an 11.4-cm pot averaged 25 cm long and 17 cm wide 8 weeks after planting. When grown from 2.54-cm tuber propagules in ground beds with full sun, leaves measured ≈4 months from planting averaged 24 cm long and 14 cm wide.

All cultivars tested produced a similarly high number of leaves typical of lance-leaved plants (Table 2). ‘UF-404’ plants were taller (5 to 12 cm taller) and had larger leaves (4 to 10 cm longer and 1 to 6 cm wider) than those of control plants. With the multiple, larger leaves, ‘UF-404’ formed full plants with excellent color display, resulting in higher performance ratings than the checks in most of the comparisons. In sunburn tolerance ratings, ‘UF-404’ was similar to ‘Florida Red Ruffles’ and ‘Florida Sweetheart’ (4.0 to 4.4 through the growing season) and was better than ‘Red Frill’ in August and September.

Plant characteristics, performance, and sunburn tolerance of ‘UF-404’ and three commercial cultivars (checks) when planted in ground beds under full sun (2006 and 2007)z.

The suitability of ‘UF-404’ for container forcing was evaluated by forcing tubers in 11.4-cm containers. No. 1 tubers were planted either intact or de-eyed in a peat/vermiculite mix (VerGro Container Mix A; Verlite, Tampa, FL) on 26 Mar. 2007. The study was conducted in a greenhouse with 45% light exclusion during the summer in Wimauma, FL. Average daily temperatures ranged from a low of 16 °C at night to 29 °C during the day during the experiment. Potted plants were placed on metal benches in the greenhouse in 10 randomized complete blocks. Plant height, number of leaves, foliar characteristics, and plant quality were recorded 8 weeks after planting.

Plant sprouting, characteristics, and quality ratings for ‘UF-404’ and three commercial cultivars when tubers were forced in 11.4-cm containers and plants were grown in a 45% shaded glasshouse at Wimauma, FL (2007)z.

Intact or de-eyed plants of ‘UF-404’, ‘Florida Red Ruffles’, and ‘Red Frill’ were similar in height and a little taller than those of ‘Florida Sweetheart’. Although it produced similar numbers of leaves as the control plants, ‘UF-404’ had larger leaves, 4 to 10 cm longer than all control plants and 4 to 6 cm wider than ‘Florida Sweetheart’ and ‘Red Frill’. ‘UF-404’ and ‘Florida Red Ruffles’ were not significantly different in leaf width at the eighth week after planting. With multiple, bright-colored leaves, containerized ‘UF-404’ plants received the highest (4.5 to 4.9) quality ratings when compared with the three control cultivars (3.0 to 4.3).

‘UF-404’ was also evaluated for its resistance to CI following a previously reported procedure (Deng and Harbaugh, 2006). Mature leaves were excised from ≈3-month-old potted plants and exposed to 7.2 °C for 3 d in the growth chamber. The leaves were then held at ambient temperature for 10 to 11 d before individual leaves were examined for signs of CI (chlorotic and necrotic areas) and assessed for percentage of leaf area injured. Four chilling tests were conducted in June to Aug. 2007 with four replicates in each test. ‘Florida Red Ruffles’ and ‘Candidum’ were used as the chilling-resistant and chilling-susceptible controls, respectively. Leaves of ‘UF-404’ had less area injured by the chilling treatment than both ‘Candidum’ and ‘Florida Red Ruffles’, indicating ‘UF-404’ has better chilling resistance than the current cultivars (Table 4).

Sensitivity of ‘UF-404’ and two commercial cultivars to chilling injury caused by exposing to 7.2 °C for 3 d. 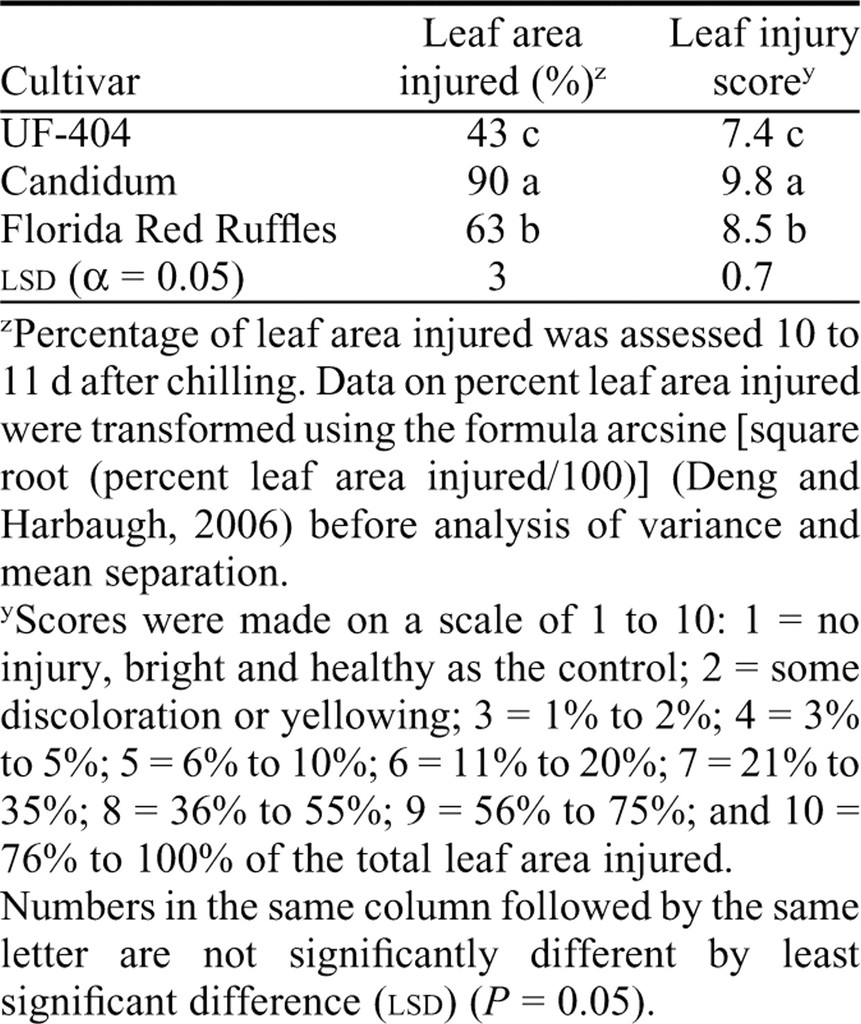 ‘UF-404’ is a new red lance-leaved cultivar with a unique coloration pattern. It has good tuber yields, especially for a lance-leaved cultivar. It sprouts earlier than most cultivars and quickly develops many wide lance leaves that are bright red. These characteristics make it well suited for container forcing and landscape use. De-eyeing is not required for producing quality pot plants in containers, although de-eying can increase leaf number and results in shorter plants with smaller leaves. ‘UF-404’ has excellent resistance to leaf sunburn and can be used in sunny as well as shady locations in the landscape. It has better chilling tolerance than ‘Florida Red Ruffles’.

Although extensive research and evaluations of these cultivars have been performed on small acreages, growers are encouraged to plant only limited quantities of ‘UF-404’ until they have gained experience in producing this cultivar. Standard postharvest treatment of tubers is recommended (Harbaugh and Tjia, 1985) and preplant hot water treatment of tubers (Rhodes, 1964) is encouraged to prolong their life.

The caladium cultivar ‘UF-404’ will be sold and marketed under the trade name Dr. Brent. A plant patent application will be submitted to the U.S. Patent and Trademark Office and plant patent rights assigned to the University of Florida, Board of Trustees. Propagation and distribution will be licensed by the Florida Foundation Seed Producers, Inc., P.O. Box 110200, Gainesville, FL 32611. Information on tuber availability and propagation agreements can be obtained from the Florida Foundation Seed Producers, Inc.