Agriculture and Agri-Food Canada (AAFC) has developed a new line of rose cultivars called the Canadian Artists™ cultivar group. This new series is similar to the well-known Parkland and Explorer rose cultivar groups (Richer and Davidson, 2004) and demonstrates the active participation of the Canadian industry in the development of roses. The second cultivar from this new cultivar group, ‘Emily Carr’, was available in June 2007 in memory of the Canadian artist Emily Carr, a famous female painter. She started her career with the “Group of Seven”, a group of famous Canadian painters in a national exposition in 1927. Landscapes and autochthonic culture scenes were her major painting subjects. She created dynamic paintings of the west coast of Canada that are still popular today. She was born in Victoria (British Columbia) in 1881 and died in 1945.

‘Emily Carr’ was developed from a controlled cross between a breeding line (Lammert's selection × Morden Cardinette × Morden Cardinette) and Cuthbert Grant made in 1982 by Lynn Collicutt (AAFC, Morden, Manitoba, Canada) (Fig. 1). The pollen parent, ‘Cuthbert Grant’, was developed by the late Henry H. Marshall (AAFC) and commercialized in the Parkland cultivar group. It includes the famous Kordes HT ‘Crimson Glory’ in its pedigree, which undoubtedly contributed to its dark red flower color. Rosa arkansana Porter var. arkansana, a northern native species, also figures prominently in its breeding, which contributes to the superior winter-hardiness of this plant.

The new cultivar was evaluated over a 10-year period at Morden, Manitoba, and in cooperative industry tests across Canada. ‘Emily Carr’ was also tested during 2000 to 2005 at AAFC Research Farm in L'Acadie, Quebec, Canada.

‘Emily Carr’ is a large shrub rose possessing an upright to bushy growth habit, a height up to 1.0 m, and a width of 75 cm. All color characteristics were determined using the Royal Horticultural Society color charts (RHS, 1986). The young shoots are yellow–green (146B). The stems have numerous short thorns (less than 5 mm long) and an average number of long thorns (7 to 9 mm long), red–brown in color (59A). The short thorns on the upper part of the stem are deeply concave in shape, whereas those on the lower part of the stem are concave. The upper side of the leaf is dark green (137B) with weak to moderate glossiness, whereas the lower surface is medium green (147C). Leaves vary between 49 and 67 mm long and 37 to 48 mm wide. Each leaf has seven leaflets. The terminal leaflet has a round-shaped base and serrate margins.

‘Emily Carr’ has a long period of flowering, averaging more than 10 weeks. An average of 7.1 flowers per flowering shoot was observed, whereas the reference variety, ‘Champlain’, produced ≈24.2 flowers per flowering stem (Table 1). Flower diameter varies between 67 and 72 mm, slightly less than the reference variety, ‘Champlain’ (Table 1). The flower pedicel has moderate to large amounts of prickles and few hairs. The flower bud (color 60A) is pointed in a longitudinal section (Fig. 2) and measures 23.3 to 28.9 mm long with moderate sepal extensions. ‘Emily Carr’ has a semidouble-type flower that is dark red (53A) aging to pinkish red (Fig. 3). The flowers have a very faint fragrance. When viewed from above, the fully opened flower is round in shape. When viewed from the side, it is flat on the upper part and flattened convex on the lower part. The petals are medium-sized, purple–red (60A), and have a spot at the base on the outer side (61C) and a large, purple–red spot at the base on the inner side (57A). The margin of the petals is slightly reflexed with slight to moderate undulation. The complete description of colors for the margin, middle, and base sections of the outer and inner sides of the petals are described in Table 1. The outer stamen filaments are white with a green tinge. The style is long exerted well above the receptacle, yellow–green, and has dense pubescence. The light green to beige stigma is positioned slightly below the level of the yellow anthers. The receptacle is small and pitcher-shaped in the cross-section with no prickles on the outer surface. ‘Emily Carr’ is fertile, and hips frequently develop after pollination.

Comparison table between ‘Emily Carr’ and the reference variety ‘Champlain’ 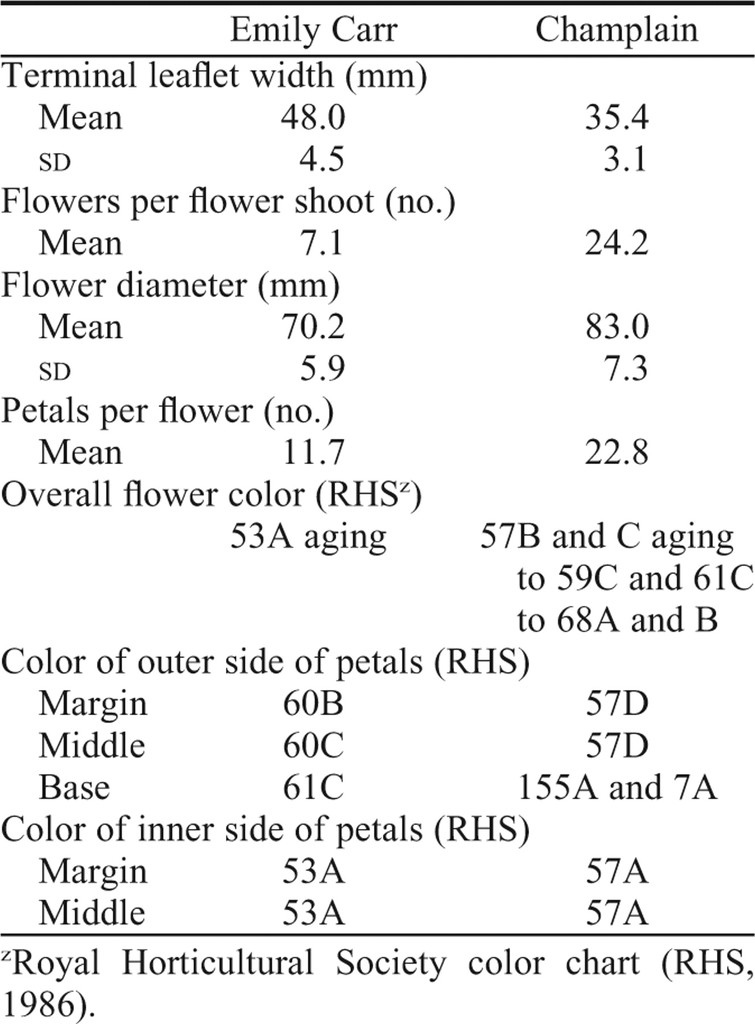 For the Plant Breeders' Rights Office, a trial with ‘Emily Carr’ was conducted at the AAFC research station in Morden, Manitoba (49°11′51″ N, 98°6′04″ W) between 1985 and 2005. A completely randomized design was used with three replicates of the candidate and the reference variety ‘Champlain’. The trial plots were 2.0 × 4.5 m in size. Plants were spaced 1 m apart. The soil type was Eigenhof Series (Orthic Black), a very dark gray clay loam moderately well drained. The flower characteristics were based on three plant measurements for the candidate variety and five plant measurements for the reference variety, ‘Champlain’ (Table 1). Also, the winter-hardiness of ‘Emily Carr’ was tested in 13 sites across Canadian climatic zones 3A to 9B during 1999 to 2005 (McKenney et al., 2001; Ouellet and Sherk, 1967). ‘Emily Carr’ can survive in Canadian zone 3A with a small cover of snow or in zone 3B without winter protection but is well adapted to zones 5B through 8B.

‘Emily Carr’ is easily propagated through softwood cuttings harvested in the early part of the growing season treated with commercially available rooting hormone (Stimroot #2, 0.4% indole butyric acid; Plant Products, Bramalea, Ontario, Canada) and placed under intermittent mist for ≈3 to 4 weeks. ‘Emily Carr’ should be grown on its own roots to ensure good winter survival. 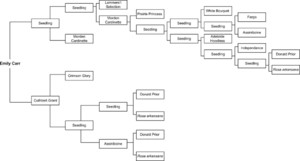