DPPH radical scavenging activity in squeezed fruit juices of strawberry, raspberry (A), and red and black currant cultivars (B) in comparison with apple. Mean values followed by the same letter do not differ significantly (P ≤ 0.05) according to a Duncan's multiple range test. 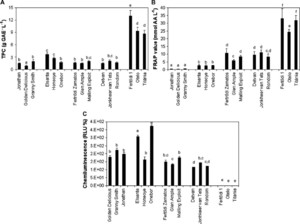