Search for other papers by Paul M. Lyrene in
ASHS
Google Scholar
PubMedClose

‘Emerald’ is a low-chill tetraploid southern highbush blueberry hybrid that is well adapted to northeast and central Florida and to other areas receiving similar winter chilling (100 to 400 h below 7 °C). Emerald produces a vigorous bush with stout, semierect canes. It has medium to good survival in the field in north Florida. In northeast Florida, ‘Emerald’ flowers from mid-January to mid-February and ripens from mid-April to mid-May. ‘Emerald’ is capable of producing high yields of berries that are large, firm, and medium-dark in color with a small, dry picking scar and good flavor.

‘Emerald’ is a low-chill tetraploid southern highbush blueberry hybrid that is well adapted to northeast and central Florida and to other areas receiving similar winter chilling (100 to 400 h below 7 °C). Emerald produces a vigorous bush with stout, semierect canes. It has medium to good survival in the field in north Florida. In northeast Florida, ‘Emerald’ flowers from mid-January to mid-February and ripens from mid-April to mid-May. ‘Emerald’ is capable of producing high yields of berries that are large, firm, and medium-dark in color with a small, dry picking scar and good flavor.

Tetraploid blueberry cultivars with a 100- to 400-h chill requirement (mean temperature of the coldest month 13 to 16 °C) are being grown in central and northeast Florida, in parts of Georgia and California, and in Argentina, Chile, Australia, and Spain. These cultivars are used to produce berries for the export market that can be harvested 1 month or more before high-chill cultivars grown in colder areas. Some low-chill highbush blueberry cultivars are also adapted to evergreen production in areas where no winter freezes occur or, where only light freezes occur, under plastic tunnels. Evergreen production gives off-season fruit, which ripens from late fall through early spring depending on the environment.

The southern highbush cultivars were bred by recurrent selection in areas with warm winters. Breeding started with hybrids between northern highbush cultivars and low-chill wild blueberries from the southeastern United States, notably V. darrowi (Sharpe and Darrow, 1960; Sharpe and Sherman, 1971). Vaccinium darrowi is a low-growing fire-adapted evergreen species that has no chilling requirement. It produces small berries and has a relatively long bloom-to-ripe berry development period. The recurrent selection process that produced cultivars had numerous selection objectives, some related to the plant and others to the berry (Lyrene, 2005; Lyrene and Moore, 2006).

Plant characteristics emphasized in breeding southern highbush cultivars include low chilling requirement and tolerance to blueberry diseases (Caruso and Ramsdell, 1995) associated with hot, wet summers and semievergreen production, including phytophthora root rot (Phytophthora cinnamomi Rands), stem blight [Botryosphaeria dothidea (Moug.:Fr.) Ces.& De Not], stem canker [Botryosphaeria corticis (Demaree & M.S. Wilcox) Arx & E. Muller], and numerous fungi that attack the leaves, including blueberry leaf rust [Pucciniastrum vaccinii (G. Wint.) Jorst]. Other plant characteristics that required selection were upright growth habit, elimination of the extreme “twigginess” that is characteristic of V. darrowi, the ability to leaf strongly during or shortly after the time of flowering, and high male and female fertility. The long flowering-to-ripening period of V. darrowi was undesirable in cultivars intended for the early market and had to be selected against.

‘Emerald’ originated as a seedling from the cross FL91-69 × NC1528, which was made in a greenhouse at the University of Florida in Gainesville in Mar. 1991 (Fig. 1). The seed parent was an unreleased selection from the Florida breeding program and the pollen parent an unreleased selection provided by J.R. Ballington from the breeding program at North Carolina State University. The seedling was selected for further observation along with 500 seedlings from other crosses when it first fruited in the field in May 1992. The plant was propagated by softwood cuttings in May 1995, and a 10-plant plot was established as test selection FL95-209A at Windsor, FL, in Jan. 1996. Because of the vigorous growth, high yield, and large berries on the original plant and on the clonal plot in 1997 and 1998, the clone was repropagated in the summer of 1998, and several hundred plants were transplanted to a test location at Archer, FL, in Dec. 1998. The clone was subsequently released by the Florida Agricultural Experiment Station and patented (USPP 12,165) on 23 Nov. 2001.

‘Emerald’ is a vigorous bush, upright to semispreading, with stout canes. In a planting established in the field in Jan. 1998 using 1-year-old rooted cuttings, the plants averaged 1.5 m tall with a 1.1-m canopy diameter after 2.4 years. Emerald makes numerous flower buds. It is being grown successfully in central Florida (Tampa–Orlando areas) where average chilling (hours below 7 °C) average fewer than 200 h. In northeast Florida (Ocala to Jacksonville), where the plants become more dormant during the winter, 300 h below 7 °C seems sufficient to break the dormancy of both flower and leaf buds. In northeast Florida, ‘Emerald’ flowers in early to mid-February (Table 1), and overhead irrigation is needed to protect flowers and fruit from late freezes. Although the plant flowers heavily, vegetative budbreak is prolific enough and begins early enough in the spring to support the developing berries, especially where hydrogen cyanamide applications are made in late December to early January to promote budbreak. ‘Emerald’ would probably be suitable for evergreen production in greenhouses.

Julian date by which the first 50% of the flowers had opened on field plots of selected blueberry cultivars at Windsor in northeast Floridaz.

‘Emerald’ flowers have low self-compatibility, and cross pollination with other southern highbush cultivars is needed to obtain full fruit set and berry sizing. In Florida, ‘Jewel’, ‘Springhigh’, and ‘Abundance’ are good pollinators for ‘Emerald’.

The berries of ‘Emerald’ ripen from mid-April to mid-May in northeast Florida (Table 2). The length of the flowering-to-ripening period (70 to 90 d depending on temperature and other factors) is somewhat longer for ‘Emerald’ than for ‘Star’. However, ‘Emerald’ flowers earlier, and in years with above-normal temperatures in late winter and early spring, the first ‘Emerald’ berries ripen with or before the first ‘Star’ berries. ‘Emerald’ has been a high-yielding cultivar both in Florida and in the San Joaquin Valley in California.

Julian date by which the first 50% of the berries were ripe in field plots of selected blueberry cultivars at Windsor in northeast Florida. 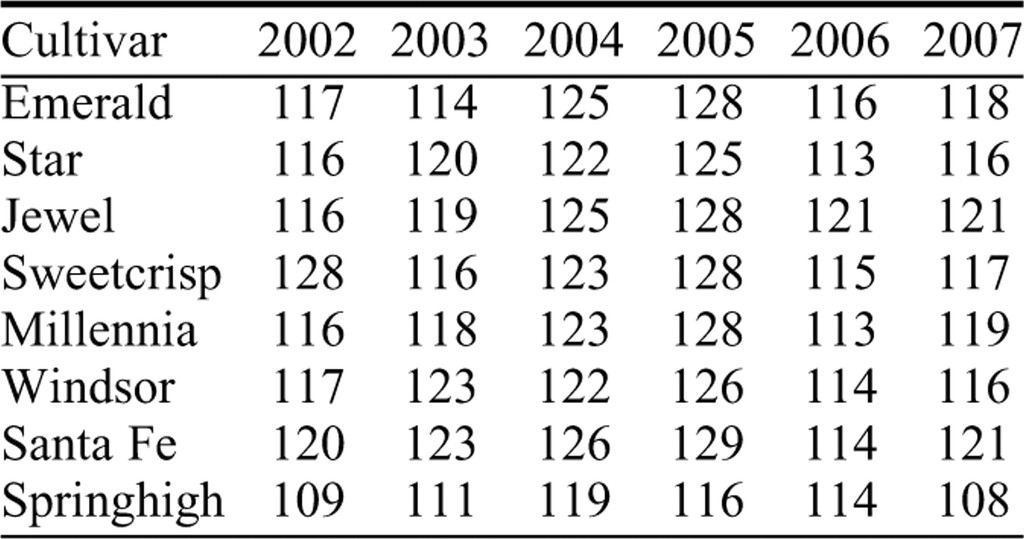 ‘Emerald’ berries are large and medium-blue in color with high firmness and a dry picking scar (Table 3). ‘Emerald’ has the ability to mature a heavy berry crop while maintaining large berry size throughout harvest. Because the berries are so large, they are somewhat tight in the clusters but are not hard to pick. In a random 50-berry sample taken during the last one-fourth of commercial harvest, weight averaged 2.16 g per berry (sd 0.11 g) compared with 2.10 g for ‘Star’, 1.59 g for ‘Jewel’, and 1.86 g for ‘Santa Fe’. ‘Emerald’ berries have a mild, sweet flavor. The berries have been commercially hand-harvested, packed, and shipped for several years without significant postharvest problems. 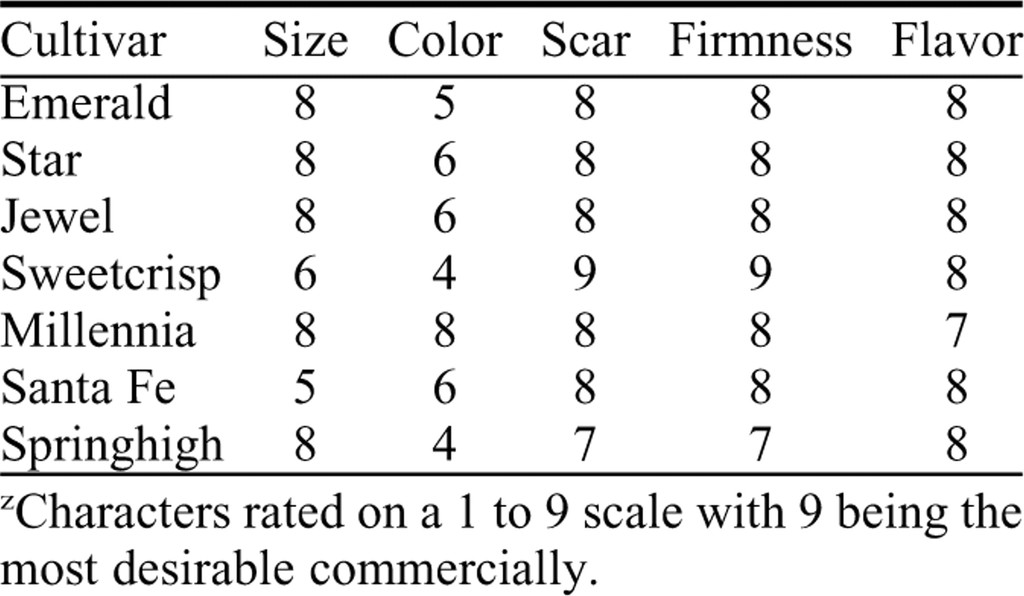 ‘Emerald’ propagates readily from softwood cuttings and grows vigorously in the nursery. In fields in northeast Florida, ‘Emerald’ has shown medium-to-good survival. It has shown no signs of infection by stem canker, even in fields where plants of some other cultivars show severe symptoms. ‘Emerald’ plants that die in the field in Florida are usually found to have systemic infections of stem blight, phytophthora root rot, or both. 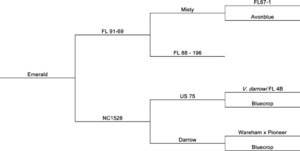